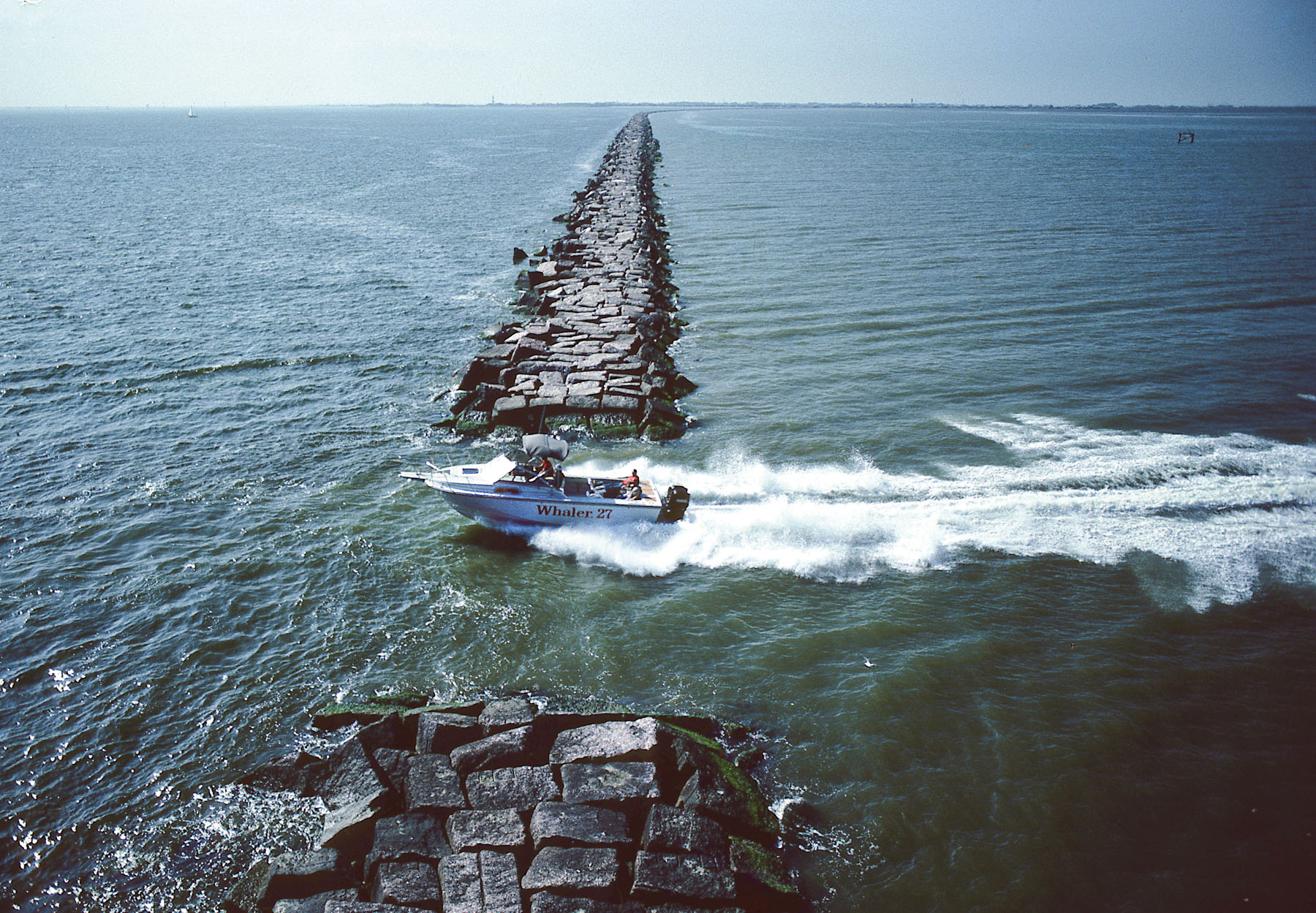 A big Boston Whaler passes through the safety cut in Galveston’s east jetty. There’s lots of room to fish those jetties, even from small boats, and the rocks offer protection from the wind.
A potential boat buyer recently started an online discussion about whether a 22-foot center console is safe enough to fish the Galveston jetties. That certainly sounds roomy and comfortable for such a short trip. For those of us who have fished the coast more than 30 years, 22 feet of fiberglass sounds like luxury. The boating trend for years has been bigger and faster, along with more efficient and safer designs (though kayaks have gained in popularity). It's a little shocking to consider that in 1970, the biggest fishing boat in our entire coastal county (Jefferson) was a 23-foot Formula. Virtually all offshore trips out of Sabine Pass in those days were made from smaller boats, unless you signed up on a lumbering partyboat. We fished from boats a lot smaller and way less expensive, by today's standards. Consider:

>The 14-foot class of stick-steering fiberglass bassboats, popular on big East Texas reservoirs in the late '60s were used on saltwater, too. Twice we trailered the family boat, a 1971 Glastron Beaujack, from Port Arthur to Key West. One trip, our tow vehicle was a Volkswagen van. Mostly we hammercocked the fish in Sabine Lake, Sabine jetties, and offshore out to 15 miles. That boat had no compass, let alone a GPS, but there were plenty of landmarks offshore. We had two six-gallon metal fuel tanks, so we enjoyed pretty good mileage, and never mind what gas cost back then. There were few other boats out there, but on some trips we had a sister bassboat along, picking our way through short whitecaps. On gravy days, we sprinted over a glassy Gulf, whooping like Sioux running buffalo over endless prairie. We had no VHF radio, but stayed within easy sight of each other. What a time we had, slinging jigs and spoons around the platforms, and even diving overboard with snorkel and spearguns, shooting at passing fish. Sometimes, riding home and buzzing through the safety cut in the east jetty, we'd hold up a 12-pound snapper for startled trout fishermen. Even late summers were great out there with clear water; we didn't have the blackwater dead zones commonly seen every August off Sabine today.

>We still run johnboats today, mostly for duck hunting, though I can't seem to quit fishing the Sabine and POC jetties with aluminum boats. Planning and attention to weather is required, of course. Pick a favorable boat ramp when the weather is "doable", and take the safest route back if and when the weather changes. For instance, you wouldn't launch a jonboat in Clear Lake to fish the Galveston jetties, you would launch near the jetty itself. Aluminum is fine around granite rocks, it simply bounces off and leaves a little scratch or dent. We found this out because we landed and walked the Sabine jetties almost 100 percent of our trips, leaving an empty, anchored boat. (The modern method for exploring jetties is using an electric motor, which saves cuts, scrapes, trips to the ER, and you also stay dry.) With aluminum boats we visited Galveston's jetties, the mouths of the Brazos and San Bernard Rivers, the fish pass just south of Aransas, Port Mansfield and South Padre jetties, and had memorable trips. Two more trips to Key West, too. It doesn't take much to trailer light aluminum behind a car or truck, and I think most memories are created by fishing different venues, rather than the same spot. Our hundreds of trips to the Sabine jetties have all blended together, unfortunately, except for a few notable injuries and stray incidents. Like the day a crewboat's wake washed most of 75 loose trout off the jetty wall during a furious session with MirrOlures. We had to swim after them. At least they floated; the Spanish mackerel sank like stones.

There was the trip to Lake Guerrero in Northern Mexico, pulling a 14-foot Monarch in August, behind a Ford Pinto. On the drive back to Houston we spent the night in Port Mansfield, where we knew the summer wind wouldn't kick in until noon next day. Our dawn patrol was ambitious: With a 9.8 Mercury we scooted out about nine miles offshore to a cluster of Gulf platforms, filling the Igloo with amberjack. Blue water is close and deep around there, and there were no size or bag limits for AJs in those days. Snorkeling, I dove down and took underwater pictures of big barracuda and a lone tarpon. With a tailing breeze it was a long, salty ride back to the Redfish Motel, where a few patrons gathered around the fish cleaning table. Whispering and shaking their heads, for some reason.

One advantage to jonboats is they can be launched in the surf, far from any boat ramp. Empty beaches can provide quick access to summer tarpon just offshore around High Island, for instance. It all depends on the day's weather and wind direction, and if a serious line of green water can be spotted offshore with binoculars. It should be noted that we always depended on Gulf platforms, in case of a sudden rain squall, and had no qualms about climbing these structures for safety. An inexpensive boat was considered expendable in a severe storm. A few times, we rode out brief thunderstorms on platforms, fishing while the empty boat bobbed like a cork, perfectly fine on a long rope tied up on the downwind side of the platform.

Last summer we fished a Memorial Weekend tournament at the Sabine jetties in my 15-foot jonboat. We must have looked like two far-out old guys, flinging gold spoons. A time or two a short wave knocked us around, and Pete in the bow went sprawling on his back across a metal boat seat, and had a hard time getting up. Somehow I ended up with both legs in the water. But we scooted along the rocks with the electric motor and boxed four redfish, four trout, a big Spanish mackerel, and released an 18-pound jack. Admittedly, two guys in a bigger center console nearby looked way more comfortable, and stuck some good fish using soft plastics, but their boat probably cost them $30K more than our skiff.

When we drifted too close to the jetties, a shove with the pushpole sent us back out to crank the electric motor or the outboard. Not bad for a 1982 Monarch jonboat that has caught so many fish. That same day I kept eyeing platforms straight offshore about eight miles, what we've long called the Sadler Rigs, where we've dragged ling up to 40 pounds into johnboats. But I had to remind myself we aren't so young these days. Those short, 2-foot waves, almost head-on, might have increased and worked us over like Sonny Liston. Next day we were denied a repeat; the south wind cranked up and we couldn't even reach Sabine's (sadly) subsided jetties that, these days, offer little protection from wind and waves. The big Matagorda jetties are more protected, but then you have to cross the bay first.

Boats were cheaper, years ago. Not sure what our family bassboat cost back then, but it wasn't much. My 15-foot Thunderbird ski boat that caught so many fish offshore, bought at a friend's fish camp at Toledo Bend, was $2,100. It was the biggest boat we ever trailered to Key West; in the summer of '77 three of us spent a solid month there, spearfishing during the day and then the night missions for hook-wary mangrove snapper. Kudos to our Johnson 70 outboard that ran trouble-free for years. Our typical fuel load was 15 gallons and that boat would haul us at least 55 miles.

Just about the time I sold the worn-out Thunderbird, we started using Bill Ferguson's big 21-foot Chaparral, a sturdy boat with a v-birth that offered shelter when we spent several nights offshore. We never did that except in Galveston tournaments, where we fished about 100 miles east, and shocked a few people by winning the big Galveston king tournaments in 1983 and '84. That boat led a charmed life and paid for itself a few times; Bill says he paid $8,600 for it. Not long after, I began acquiring bigger boats, and that always means more expenses. But we won more tournaments, so it was okay for a while.

Back to the question of a 22-footer at the jetties. It all comes down to experience and judgment; and I would encourage boat owners to start fairly small and work their way up. That's the old-fashioned way. In today's faster environment, a lot of people start off big, figuring a lengthy boat will cover minor miscues. Or bad luck with the weather. It will, but not always. In experienced hands, a 22-footer can handle a great deal of adversity and accomplish a great deal.

The most hardcore fisherman I've met was probably Billy Wright, who once took a 23-foot SeaCraft across the Gulf. Billy has spent more days offshore than most of us have dreamed of, and he single-handedly drove Capt. Howard Horton's yellow SeaCraft from Cozumel to Galveston without stopping, a distance of 700 miles. He stopped to refuel in mid-Gulf, because two boats from Galveston Yacht Basin were crossing that week, bigger vessels like the Abra-ca-Dabra. For some reason U.S. Customs in Galveston had a difficult time, believing Billy's last port of call... Whether he carried his passport on that trip isn't known, but perhaps it wasn't required back in the 1980s. And no, it wasn't rough that trip. Billy said it was so glassy, he could see his face reflected on the water.