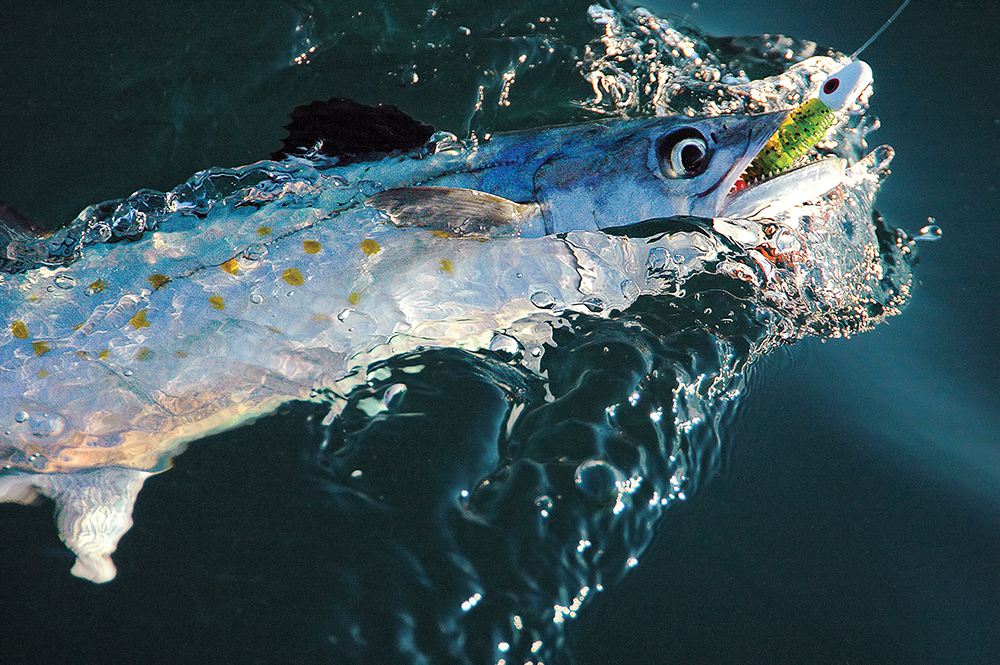 I’ve been a fan of Spanish mackerel for a loooong time beginning with my great uncle’s big catches in Miami many years ago. Fishing out of his own 16-foot fiberglass boat with a huge for its day Johnson 40, Wib plied the winter mackerel runs in Biscayne Bay out of South Miami. Slinging jigs from red Ambassadeur 5000A reels, he said his best day was 90 fish. He fed the neighborhood, too. Including my future wife’s family, who lived down the street. Making his own white bucktail jigs, he dried them by the hundreds on a clothesline in the backyard between huge mango and avocado trees. When I was in the seventh grade he recruited me to help; I still have his lead jig mold.

His top mackerel weighed nine pounds, and one can imagine the hard days out there, working that rather slow baitcaster reel. Those mackerel cut off countless numbers of jigs because he didn’t care for wire, instead using 40-pound mono. When the neighborhood preacher, fishing close by in another boat, ran out of jigs, he hollered across the water, hoping to buy some. “I won’t sell you any, but I’ll give you some,” said Uncle Wib. For me that was an early lesson in generosity.

Mackerel on the Texas coast are still a favorite to this day. Decent sized mackerel of three pounds or better provide ideal fillets. When we invite people over for dinner, it usually means fresh, thick mackerel fillets, broiled with Tony’s spice, served up with oven roasted new potatoes, salad and white wine. We’ve eaten mackerel hundreds of times. Trout and redfish, not so much; the mackerel have a better flavor.

This all came back to me last month when I hooked my biggest Spanish mackerel ever. Something powerful slammed my gold spoon and took off. Wary that the spin reel would be spooled, I handed the rod off to Amy and cranked the boat engine, and we began to follow. However, after 50 yards, the fish began to circle. Eventually she worked it in close and I scooped it up with the landing net. The darn thing looked like a kingfish. Upon closer examination, it had the shiny black dorsal, proof it was a Spanish. Weighing 6 pounds, 4 ounces, it provided a real feast with those thick fillets! At the table two days later, five of us couldn’t quite finish it.

As mentioned, a wobbling, flashy spoon is irresistible to these fish, if worked in a quick but erratic retrieve. That means you want a fairly fast reel of at least 6:1 ratio or more. Crank the spoon too slowly, and mackerel may only follow it for close inspection before turning away. We’ve caught fine mackerel on jigs, MirrOlures, even topwater plugs, but the spoon has the flash of a crippled minnow that triggers these fish. Like the jig, the spoon has good casting ballistics and sinks fast in the water column.

As I write this, plans are in the works for fishing Port O’Connor for two straight weeks which means I’m packing every spoon I can find—even a few lucky, scratched and fading survivors up to three years old. Dixie Jets and Johnson Sprites. Both will catch jetty and surf trout, and redfish too. Mix late August and early September with jetties, green water and spoons, and you’re looking at a slugfest. There will be losses, because mackerel are hard on tackle. Before you can blink, they’ll clip off a treasured, (no longer produced) killer MirrOlure in the surf and you won’t feel a thing… likely drawing a pardonable screech of anguish only heard by seagulls. Which is why we almost never used MirrOlures at Sabine back in the day; on some days trout were mixed evenly with mackerel and the bigger plugs were too expensive to fritter away on a mackerel school. Trout wouldn’t hit wire leader, so we used straight 20-pound Ande line. Back then we threw cheap Acme spoons (bought at Gibson’s) and hammered the mackerel and trout, going through many cards of spoons. Their small, freshwater hooks were lame, replaced by larger treble hooks before every trip. We still fish with spoons to this day, which seems to be a lost art at the jetties, offshore or in the surf.

One of our most memorable Spanish mackerel fishing days was Labor Day 1980. Recent honeymooners back from a South Miami wedding, my patient bride Amy had just settled down with me in the scenic town of Port Arthur and was getting a crash course on Texas fishing. We’d stopped the boat at the Sabine jetties after running around offshore all day in our small boat. An outgoing tide had near-useless chocolate water wrapping the jetties, but small minnows were spraying near the rocks, so we knew something was after them. By reeling our spoons slowly across the surface, we hooked and landed enough mackerel to fill a four-foot cooler, easily a hundred pounds. A total melee ensued as we hoisted one fish after another into the boat, which soon became splattered with fish gore from bow to stern. At sunset we hauled them straight to Marion’s Cafeteria in Nederland, where they were soon served up. Welcome to life in Port Arthur.

We were using Ambassadeur reels that day, not quite so sporty as spin gear, but our red and silver reels with 20-pound line were more practical around platforms offshore and later, jetty rocks. With spin gear, you need elbow room and no obstructions. Even so, spin’s 12-pound line will cut awful easy. On some days mackerel are hungry enough to bite small, black swivels and even mono knots. We don’t use swivels to attach the necessary heavier mono leader, but instead connect the reel’s line straight to tough 40-pound Ande mono or fluorocarbon leader using a blood knot. Many times I’ve had people in the boat ask about that knot while I was patiently building another leader. The soft, almost invisible knot is crucial for catching sharp-tooth mackerel. You really don’t want a metal swivel clacking through your rod tip every few minutes during savage action; that’s a sure way to lose a rod tip.

The key to all this action of course, is finding green water—our one Labor Day muddy water success was an exception to the rule. At Sabine, back in the day, we were often confronted with dirty water around jetty rocks, probably more so than any other Texas jetty. Where to go? Sometimes they’d drop me off on the jetty and I’d climb a navigation tower at jetty’s end, high above the rocks, peering in all directions. Looking for that magic dark line of water that almost guaranteed action. One slip above the granite rocks and it was all over, but I was sure-footed. We’d then take the little boat east, south or west, wherever green water beckoned. Such was our hunger for action. Arriving at some platform or buoy offshore, we’d tie the boat off and start slinging spoons, letting them flutter deep, if need be.

Further offshore out there in depths of 30-50 feet lurk plenty of mackerel. That’s mostly over the horizon off Sabine, but further south along the Texas coast, those depths are within easy sight of land. The water is greener down south, as well. That’s dependable fishing unless the tide is slack. Or, off Sabine, the dead zone of anoxic (low oxygen) water has moved in during late summer, which now seems to happen often.

Sometimes, massive bait schools arrive and stay, and mackerel stay for the feast. When massive schools of tiny reddish anchovies gather at the POC jetties in autumn, mackerel gather from far and near, spending days gorging on their tiny prey. Manta rays even show up for the action. I’ve even seen those anchovy schools working in green bay water during high tides, with mackerel splashing all around, only minutes away from Port O’Connor. It’s fast action on spoons. Sometimes back at the jetties, a big kingfish will jump high with a mackerel in its mouth. Often coinciding with calm weather, it’s a great time to be out there.