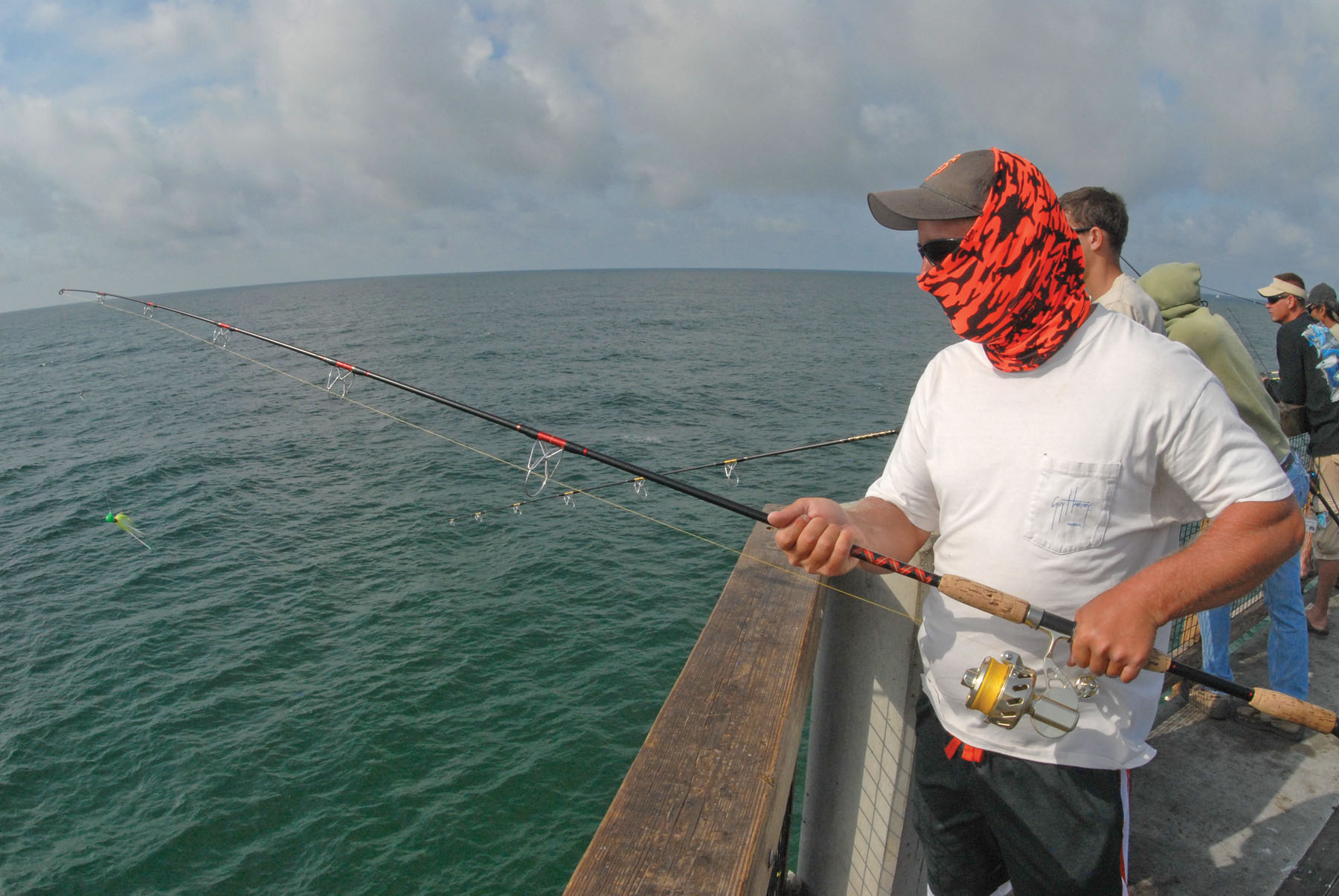 Angler on a sunny Navarre pier wearing a Buff.

Ever wonder why desert dwellers cover up so much? It's because they know the sun can ruin you. They can't pick up bottles of SPF-80 sunscreen at their local pharmacy, like we do. But as it turns out, they may be ahead of the game. Recent studies suggest that covering up is by far the best method for avoiding permanent skin damage.

Unfortunately for us, many of today's sunscreens may not be providing adequate protection. Granted, living under harsh desert sun isn't the same as weekends on the boat. But sun exposure is cumulative. Like punching a clock, the hours add up. Ever seen a coon-eyed bay guide with a face like beef jerky? They have lots of hours on the water, haven't covered up enough, and are definitely higher-risk.

Long-sleeve sun-proof fishing shirts are stylish these days, and that's a good thing. But most American anglers still depend on sunscreen to cover exposed skin during a long day on the water. And that ain't so good. After my wife was carved on by the "skin doctor" in Victoria 15 years ago, we began to read up on skin cancer. In the midst of various sunscreen promotions, a few articles popped up suggesting problems with actual sunscreen use, so we gradually began covering up. It wasn't easy after so many care-free days on the water. I had spent the entire 70s decade wearing tee-shirt and shorts, cranking a red reel on sun-blasted jetties.

A gradual cover-up followed, finally maxing out two years ago while fishing the entire month of August out of Port O'Connor in drought weather. Almost one hundred percent covered up with no sunburns. And now this article appears online last summer, called Study: Many Sunscreens May Be Accelerating Cancer by Andrew Schneider. (The article can be Googled). Mix the choice paragraphs below with news that skin cancer has more than doubled in the past 30 years, and fishermen have a problem to deal with.

"The white goop, creams and ointments might prevent sunburn. But don't count on them to keep the ultraviolet light from destroying your skin cells and causing tumors and lesions, according to researchers at Environmental Working Group. In their annual report to consumers on sunscreen, they say that only 39 of the 500 products they examined were considered safe and effective to use."

The use of the hormone-disrupting chemical oxybenzone, which penetrates the skin and enters the bloodstream.

The lack of needed regulations and oversight by the Food and Drug Administration (FDA).

"But the most alarming disclosure in this year's report is the finding that vitamin A and its derivatives, retinol and retinyl palmitate, may speed up the cancer that sunscreen is used to prevent."

"The ideal sunscreen would completely block the UV rays that cause sunburn, immune suppression and damaging free radicals. It would remain effective on the skin for several hours and not form harmful ingredients when degraded by UV light, the report said. But in the U.S. there is currently no sunscreen that meets all of those criteria. The major choice here is between 'chemical' sunscreens that have inferior stability, penetrate the skin and may disrupt the body's hormone systems, and the 'mineral' sunscreens [containing] zinc and titanium dioxide."

An obvious choice between the two - the latter "mineral" type was highly recommended to me years ago by a dermatologist who specializes in a field where, these days, you may have to wait three months to complete an appointment. It's a billion-dollar business, repairing sun-damaged bodies. I've squirmed under a few skin trimmings myself, though so far no stitches like others have acquired.

It's just best to stick with sun-proof clothes, at least from 11 a.m. to 5 p.m. So let's cover the areas, so to speak, where fishermen are prone to burning during a long day on the water. And remember that your boat's t-top may offer precious shade, but reflected light off water (or beach sand) assures you can burn regardless. Let's take it from top to bottom:

I started using the "pelican hat" (brown Lefty Kreh long-bill with a neck flap) back in the early '80s while offshore, to the amusement of many at the Galveston tournaments. I was pleased with the hat, however. (Once while fishing around the famous Mark Sosin, I inquired why mine was so much saltier than his. He barked in my face, "Because you're too cheap to buy a new one!" Turns out Mark received a free case of hats for his TV show). They're still the best fishing hats around; a big straw hat might throw shade and protect your shoulders, but one gust of wind and they fly away. They're hard to clean, as well. Great while kayaking in calm weather, they say.

Much more recently, the new Buff head wraps have hit the market. These stretchable, breathable tubes, about 14 inches long, can be worn over the head in a variety of ways. And that favorite ball cap looks good with one. However, Buff fabric isn't completely sun-proof (like cotton) and it's recommended you wear quality sunscreen beneath it. Especially when the sun beats down like Perdition at mid-day.

I started wearing Buff wraps last summer, because standard bandanas were thicker and hot, though more sun-proof. The Buffs have become stylish in Florida and in May I was shocked to see even teenage fishermen wearing them on Florida Panhandle piers. Some of the classic pier rats---those patient, sun-blasted older guys with skin like cured bacon, are now switching to wearing Buffs on the Navarre Pier, where they're called Navarre Ninjas. One of the guys I talked to there, aged 60 or so, was covered to the sunglasses and said he's had about 20 skin cancer procedures. He shook his head and muttered each time a family of Georgia tourists strolled by, their small kids not even wearing hats under a cruel sun. "They'll learn, one of these days."

In a pinch for a head wrap, grab a three-pack of bandanas from your local big box store for about $2.99. That's enough for a three-day trip and you can toss them in the wash after returning. They're more sun-proof than a Buff, but a little warm on still coastal days. If they're too hot to wear while fishing, at least try them while running the boat; they'll cut the sun perhaps 100 percent and the breeze while running keeps them cool. That knot behind your head means your ears are covered as well, which muffles outboard motor noise---another plus. While returning from offshore, you can trim hours of sun-time with a simple bandana. Tug it down and cover your neck while talking or sipping something cold.

That covers the head---if you've remembered wrap-around protective sunglasses like the military wears. Completely UVA and UVB proof, of course. To prevent eye and body fatigue and ultimately, cataracts.

How about the torso? Any sun-conscience angler by now has given up on t-shirts in the boat, when faced with a long day out there. (The billfish crowd can be excused here, since their boats have cabins and air conditioning, and they do love their Guy Harvey t-shirts). Most bay anglers and the offshore center console crowd have switched to what I generically call Columbia Wear, the long-sleeve sun-proof shirts made by a number of companies. They cover more of the body than anything else. When the sun beats down, it's time to button up.

Gloves: I was introduced to sun gloves (fishing gloves) three years ago, and they're great! The last digit of each finger is exposed, which allows for breathing and dexterity when tying knots. There's no telling how many nicks and cuts I've avoided while grappling with fish and at day's end, no sun exposure on the hands, nada. Ever noticed the back of old men's hands after a lifetime of fishing and outdoor work? Not goodThe skin is thin there and you don't have much to work with, if skin grafts are needed. Wearing gloves means you can handle live shrimp without getting sunscreen on them, too.

It used to be satisfying to have sore fishing hands on Monday, but I've learned to forego that honor. Ernest Hemingway used to say that the first thing that deteriorates with fishermen is the hands, though the guys he knew back then had no protection. I've tried itchy, hot fishing gloves, thin gloves more suitable for fly-fishing (and handling one or two fish per day), thicker gloves more suitable for winter, and then a combination of breathable thin material with pads sewed into the palms. Wind River combined those two factors and so far for me they're the favorite brand.

Okay, we're covered down to the waist, but what about those sunburned legs? My solution has been to wear cooler shorts instead of long pants, until about 11 a.m. Beyond then, I pull out a pair of rolled-up doctor's scrubs (that will fit into a sandwich bag) that easily pull over the shorts and drape down to the ankles. They're light, sun-proof, airy, dry fast and bug-proof. And cost about a dollar at the nearest thrift store. Back at the marina, tug them off for the car ride home. They're probably splattered with fish blood, anyway. Light and breathable fishing pants are available too of course.

That brings us to shoes. My cure for a dozen years, after witnessing sun burns, foot cuts and lame footwear that brought on fasciitis (a painful foot condition that will leave you hopping across the driveway after a day offshore) is this: My New Balance shoes have double inserts for a hard day offshore---inexpensive full-length pads, and then extra heel pads. It's like walking on air, compared to leather docker shoes with no padding that have likely hobbled many an offshore angler. Again, the billfish guys wear what they want; their big boats don't toss them in the air like the rest of us.

Sun protection to consider: If you want to go the distance, it pays to cover up.