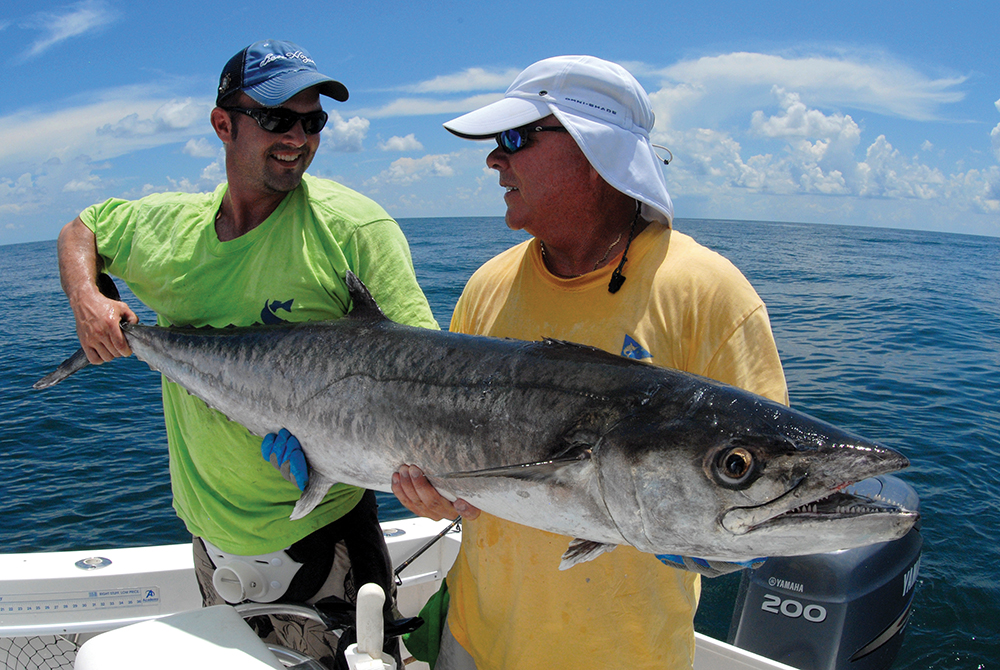 Bud and Alan Reynolds with a 40-plus pound king off Sabine Pass. Released about five seconds later.

Over the years I’ve noticed the very biggest kingfish seem to arrive off our coast in May. Perhaps they’ve been wintering further offshore, and prowl closer to the beach as the Gulf warms. This big king period in May and early June often coincides with windy weather, and this may largely hide the passage of these high-jumping sport fish. Offshore angler effort and the tournaments haven’t really cranked up much, either. So, many of these big female fish, capable of carrying several million eggs each summer, just manage to miss the peak of fishing season.

Kingfish over 15 pounds are said to be almost entirely females, so we’ve always released these bigger fish if at all possible—unless a tournament was involved. There is also a health advisory against eating kings bigger than 10 pounds or so, because of traces of methyl mercury, which we certainly don’t need on the dinner table. That’s why it pains me to see big, dead kingfish on the charter docks or fish cleaning tables, waiting for some uninformed person to clean and take them home.

Kingfish can be released—it just takes patience and a little skill.  I’ve seen boats offshore gaffing and waiting a leisurely period until the fish stopped struggling, before gingerly unhooking them. Tossed overboard, each fish sank, clearly a waste.  With a hard, bony tail, these fish can actually be tailed and pulled aboard, the hook(s) removed with 8-inch needlenose pliers. That is, unless the sides of the boat are too high for anglers to reach the water.

In our tournament days we used live and dead baits and single hooks with the barbs mostly flattened, which helped hook penetration but really speeded up each release. After about 30 seconds, these fish become feeble out of water. Over the course of three summers we tagged and released something like 400 kingfish, and some were recovered in faraway lands. (Our distance record was a Galveston king that was recaptured off Cape Canaveral). So, don’t buy into dogma that all released kingfish are going to die and are food for the sharks. We even released a 30-pounder off Galveston that we caught again the following summer during a tournament that won prize money…a lesson on the limits of our resources in the Gulf.

Another trick for catching bigger kings is using heavier tackle, say 40-pound line on a lever drag reel. This sort of muscle allows for landing fish in a timely fashion, instead of stretching out the fight for too long.  Over on the Atlantic coast they use lighter line and wire leader, hoping to entice one of the increasingly rare big kingfish still swimming off that coast, where tournament winner fish sizes have dropped. Here in the Gulf, kingfish aren’t nearly so line- and leader-shy.  Texas and Louisiana both have big, offshore continental shelves where kingfish can comfortably live 60 or more miles offshore, far from boat ramps. (Although the trend in bigger, faster boats over the past 30 years has made reaching these fish much easier). So, target those big kings with medium tackle like we’ve always done. Keeping in mind that the Penn Senator 4/0 reels have long been the favorite for tough offshore charterboat work.

As for bait, kingfish aren’t that particular. Forty years ago we’d toss out a small snapper and watch it get clobbered by big kings. Today, red snapper are protected with bag and size limits, not to mention seasons, and you don’t want to be polygraphed after catching a first place kingfish, and having used snapper for bait. Stick with legal baits like big mullet, small jacks, ladyfish, ribbonfish, the list of species is long. Big mullet can be caught with a castnet. The remaining species are caught with trout tackle, which we always carried offshore. Fresh ribbonfish are caught in late summer under the lights at Port Aransas, or during the day in Moses Lake just off Galveston Bay, using gold spoons. Don’t try to use a live ribbonfish for bait, they’re quick as a snake and have very sharp teeth. Big kings love them dearly, however. Twice we’ve caught 49-pound tournament kings, using fresh dead ribbonfish. We also used to board bay shrimpboats in August, when ribbonfish are bigger.

Offshore baits are easier and more close at hand, while out there on a boat. We once

caught a 51-pound king using a live “ruby redlips” grunt while aboard a partyboat. Sometimes we trolled live baits, and the resulting strikes and “skyrocket” jumps were the pinnacle of a weekend. Some days these fish jumped all day, and the next day, not. Just big, savage boils in the water when they grabbed on.

These bigger kings are found at offshore platforms commonly fished during summer, but you have to hit them in May or June. Fishing pressure grinds them down and by July, you have to look elsewhere. Maybe a wreck nobody has fished in a while. Or what we used to call a “snapper rock” or “bubbling rock” where natural gas constantly seeps to the surface. It might be a tiny gas platform only 15 feet wide.

Big kings can also be caught at night. For us, prime time was always sunrise and sunset, which meant spending the night offshore. We fought those big kings, while everyone else was back in line at the boat ramp, or on the highway home for the evening. We never really had the energy to fish beyond 10 p.m. on an overnight trip, because we needed rest to fish the next day. We found it was best to pick a big platform with lots of overhead light, and no sandblasting. We felt safer around solid structure, ladders, ropes and people overhead, instead of some pitch-black platform with only one blinking light on top. Or anchoring over a snapper rock, and having ships and shrimpboats passing by, a perfect scenario for getting run over.

Big, overhead platform lights attract all manner of baitfish and predators, especially on really dark nights, so there was no need to bring our own. We had to keep alert for a change in the current’s direction; you don’t want to wake up with the boat stuck inside the platform, grinding away against barnacles and steel pipes, which has happened to others. It’s not a venue for knocking down beers and sleeping soundly. Even a wind shift can cause problems, not to mention nighttime storms. Been there, done that; not as much fun as it sounds.

And so much for that. On a side note, if you are catching kingfish for the table, target the smaller fish. These can be caught behind anchored shrimpboats that show up in July. Or by trolling diving plugs near the jetties when clear green water is present. When trolling those treble-hook plugs, it’s best to swing these (usually) smaller kings into a fish box and wait for them to stop thrashing, before removing the hooks. You don’t want to be tugging on multiple, heavy treble hooks when the fish is jumping up and down; that’s a recipe for an early trip home to the ER.  We consider plug trolling as fishing for dinner, also known as meat fishing—not catch and release. And an 8- or 10-pound kingfish, cut into round steaks, is great on the backyard grill. Much safer and tastier too, than the bigger, older fish with darker meat—that should be released unless involved in a tournament.