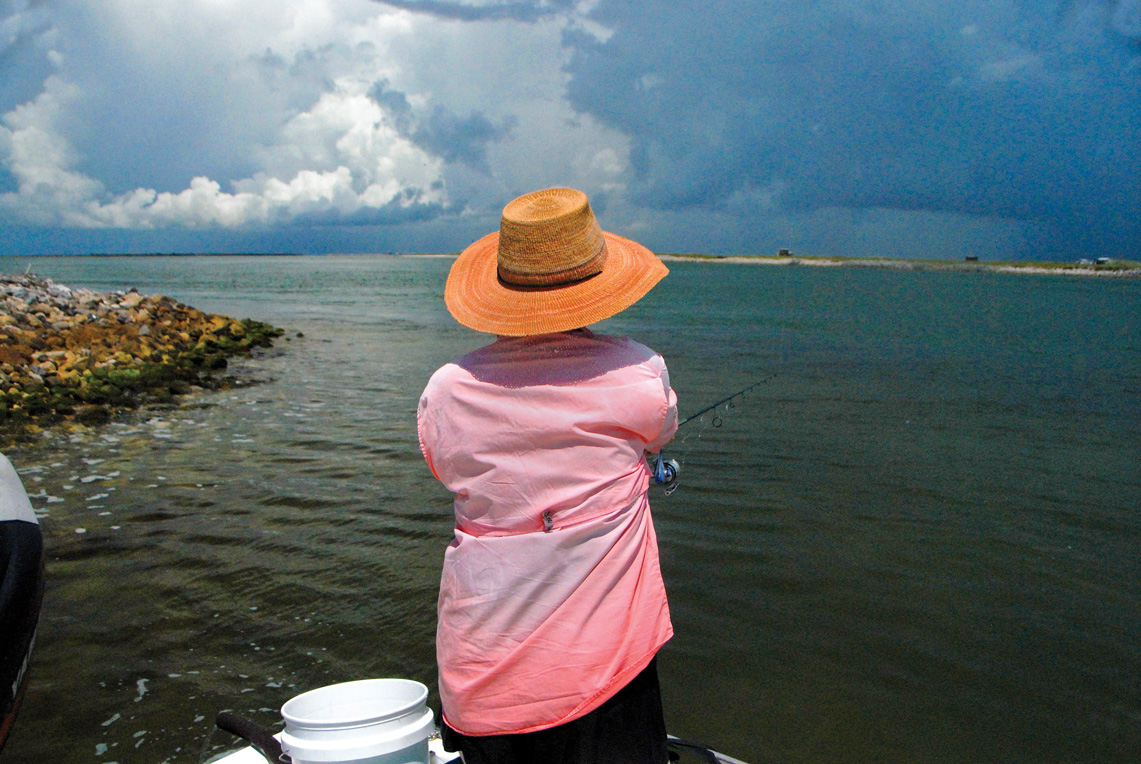 Keep casting for more fish, or cut and run from this approaching storm?

Veteran fishermen have encountered this problem many times: when a storm appears on the horizon, when do you cut and run? Or hunker down and take shelter? There are countless variables to this situation for wade, pier and jetty fishermen, and all boaters. Wind, rain and lightning are a constant summer threat. Can you judge that storm, dodge it or reach shelter in time?

It happens every summer. Last year, Miss Amy and I were at the POC big jetties when a moderate storm with lightning came looming from the Colorado River. We watched it, catching a couple of nice redfish, but were finally flushed out of the pocket, so to speak, and none too soon. Amy voted to head back to town, but I knew a protected cove only a half-mile down the shoreline and away from the storm. Better yet, there were houses. Crossing whitecaps, we sailed into smooth water and tied up to someone’s dock, nobody home. I eyed the house 20 yards away and distant lightning, ready to invite ourselves under their house if need be. Sorry, trespass rules don’t apply with me when lightning starts hitting close; I’d rather have a heart attack than be fried from the sky. Soon the storm veered at the last minute and headed off towards Port Lavaca. We fished that friendly cove for a few more minutes and then headed back to the jetty. And had it all to ourselves. Well, some days you make the right call.

We know that area well. The trouble with fishing new areas is you don’t really know the lay of the land. Or have first-hand knowledge of shelter or short-cut escape routes. Four summers ago, we found this out the hard way after trailering our jonboat all the way to mighty Boca Grande Pass in Florida, where countless tarpon are caught. It was late-July and the place quiet, the tarpon and crowds had moved on. We made some drifts and saw a few rolling tarpon. That afternoon a decent storm came up from the southwest with some fairly close lightning, one bolt hitting an anchored sailboat a half-mile away. We were eight miles from the public boat ramp, but our big Ford van was parked only 60 yards away at the state park. So, we pulled the boat up on shore as best we could on the bay side, tossed the anchor through a big forked tree, and ran for the van. Behind us it sounded like artillery. We then drove around town and had lunch.

We returned to the boat an hour later. The storm was mostly gone except for drizzle, but we were shocked to see waves crashing over the boat’s stern. It was full of water, sand and crushed shell, with whitecaps hammering over the motor. Three of us worked like demons to bail the boat out. Amy held a plywood deckboard in the water as a seawall, so that whitecaps stopped refilling the boat. I couldn’t dig down through sand to the drain plug, but we had a bucket as always and bailed out the water. Swung the bow into the waves, jumped in, cranked the engine and oldest son Ian and I took off in a light rain over the two-foot waves, running a half mile north to a protected cove with several homes. If we’d only known about that cove before…but we’d just discovered it while driving around those quiet streets with the car. Back there in calm water, we found an overgrown little boat ramp amongst the mangrove trees, called Amy with a soggy cell phone. She arrived and we soon pulled the boat out. Saving a long ride back to the county ramp. It was a lesson learned—get the lay of the land before bad weather hits. At least make a mental note of handy shelter, a potential refuge from wind and lightning, even if it’s an old fishing shack.

Several summers ago in Port O’Connor there was a really bad afternoon forecast, a storm to arrive at midday. A two-boat charter headed offshore out of Clark’s Marina, and later came limping back after a terrible storm. One thankful angler climbed out and literally kissed that old creosote dock, thankful for solid structure under his soggy feet. Worse, his partner had to shake out his pants because the waves and lightning had literally scared the you-know-what out of him. It was an ugly thing to see, and there was nothing to be done…All eight anglers and two captains looked like drowned rats. Another captain had returned minutes before to witness the scene. He’d fished close to town, but still had to seek refuge in one of the bayside shacks nearby. His clients stayed dry, but lightning struck their plywood cabin and the explosion knocked everyone flat. He said they all got an electric jolt, but nothing serious. Overall it was a bad day for local fishermen.

Every boat captain has a responsibility to get his passengers back to the dock in one piece, and hopefully in a frame of mind where they will return to the sport. It can be assumed that the older captains, who have seen plenty of storms, know how to dodge most of them. But each storm is different in size and intensity. Also, they don’t move in a constant direction and speed. They can stop, energize, change direction and then lunge right at you. All we can do is stay alert, keep a weather AP handy, or have a friend who will monitor the weather and call. Judge each storm and act accordingly. If an epic storm arrives as it does every few years (hopefully not on a Saturday morning) well, all we can do is duck and cover.

Great memories over the years. One summer we were surrounded by black sky and lightning offshore, and I kept the boat tied to the Gulf platform. It was a big one with overhead structure and presumably a lightning rod. A bolt struck the rig about 80 feet away, jumped down the corner pipe and into the water. We were deafened and dazzled and mostly thought we were dead. But we revived and soon had second thoughts about hanging around there much longer. The dark sky then brightened exactly in the right direction, Pass Cavallo, and we bolted out of there and “ran for daylight,” as Earl Campbell used to say. Behind us there were more lighting strikes but they receded as the miles went by. Back at the Pass it was hot and sunny. But no snapper, unfortunately.

Almost everyone has ample boat horsepower these days, to scoot away from an approaching storm, if that storm isn’t blocking the way home. I seem to be an exception to the rule, with my own craft running maybe 30 knots on a good day if I only have a trim Miss Amy on board. If I have two big guys on a charter, well, the boat runs slower. I don’t use a steel prop for more speed, because I often fish around rocks. Recently we dallied a little too long fishing a shoreline, with a little storm further down the shore and away from our boat ramp. I floored the engine for six miles along the shore, with a low tide unfortunately, keeping just ahead of the storm, but the darn thing caught us anyway by hooking around inland and cutting us off. We got soaked in the bayou only three hundred yards from the ramp. Got off fairly easy, because lightning was distant and there was no wind. The rain quit after 10 minutes while we put the boat on the trailer. It was a harmless shower and we probably could have sat it out under a tarp, but it was late in the day and we already had some nice trout.

It goes without saying that every storm is different. I must have done something right after all these years of surviving storms, or I wouldn’t be here. At this point I’m not thinking about getting a bigger boat, but maybe more horsepower to outrun these darn things.