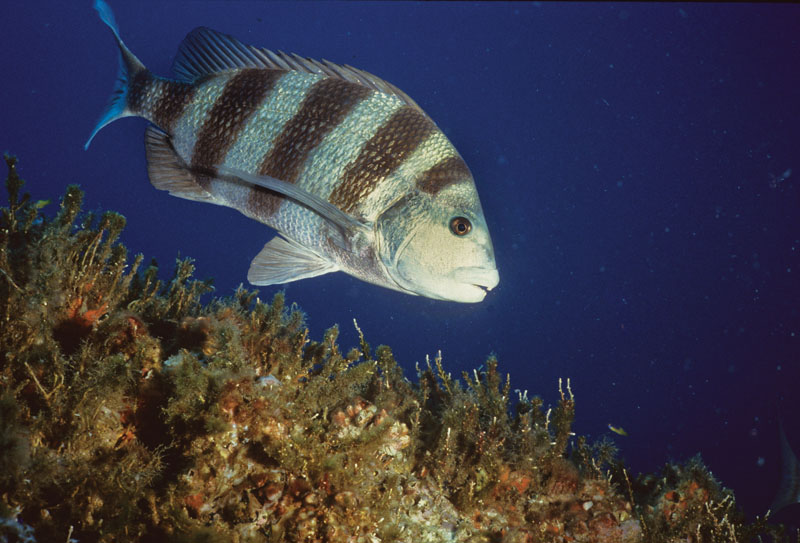 Tasty sheepshead prowl the rocks looking for tidbits. They feed strictly on crustaceans such as shrimp, crabs, barnacles and small oysters.

Not every angler is cut out to fish our granite jetties along the Texas coast, subject to Gulf waves and strong currents. Those big granite rocks steal countless anchors and tackle, as well. Just anchoring near these multi-ton rocks is enough to give some people the willies, guides included. "Fishing the rocks" is one thing in summer, but what about in winter? Get caught out there in winter's pea soup fogs, waves crashing over cruel rocks only feet away, and the fun really begins. Or a sudden norther arrives, making for a cold ride across whitecaps across Matagorda Bay. Lives have been lost out there in winter–jetty fishermen who didn't make it back.

Yet, the jetties remain my favorite venue for 45 years. The fish are always there, even in winter. When the bays are too fresh or their water temps too low to support fishing, the jetties provide. Why? Deeper water protects them, and the rocks support a wide variety of marine life. The jetties can actually warm up in a single day when a strong, incoming tide moves in from the Gulf, even in January.

At one time I was a jetty guide, and made numerous trips out there in winter. Often with guests who couldn't even cast, and so dropping baits at the jetty was pretty much a sure thing. Some days were better than others, according to wind and tide. But I cleaned many a big sheepshead and redfish after a chilly day out there. We caught so many sheepshead, I enforced a size limit of at least four pounds. That way I didn't have to clean a pile of small fish with little meat.

Staying hooked up at the jetties seemed much preferable to wading for winter trout with a stiffening lower back. I prefer constant action, so I'll stick with the rocks.

In winter this is no place for artificials, unless you enjoy dropping jigs deep, tipped with shrimp, which I have done many times. Back in the day at the Sabine jetties, we'd cast homemade 3/8 ounce jigs tipped with shrimp, ease them through the rocks, and soon fill a box with sheepshead. We were selling them, and didn't care about the size, although none were less than two pounds and most were chunky three and four-pounders. Action was constant on many days, and the 68-quart Igloo was soon overflowing with fish and spiky fins without ice. No need for that; a bucket of Gulf water was chilly enough.

One good thing about fishing out there in winter–the little bait stealers are gone. Live or fresh shrimp can be used without getting nibbled away. The only worthless fish out there is the oyster toadfish, which bites when the tide stops. That's a sure sign the other fish are taking siesta.

Where to find live shrimp? None were available at Sabine, so we'd buy frozen shrimp and keep a lookout for small shrimp boats working nearby. They'd give us a pound or two of small rock shrimp, which worked very well. And they really stayed on the hook.

Okay, so how'd we fill the fishbox out there?

Rigging: We never rigged more than one hook. While guiding in Port O'Connor I used number two J-hooks. Forty-pound Ande line for a leader, which is a tough line around rocks and barnacles. Our two-ounce bank sinkers with rounded edges zipped those baits down to the bottom, and could often be jiggled free if they became snagged. Egg sinkers and pyramid weights were lame in the rocks and were quickly snagged and broken off. If the current was slow, a one-ounce weight would do the job.

Tackle: The jetties guides I knew all preferred the Ambassador 5500 reels on seven- foot baitcasting rods. Packed with 20-pound line that could horse a stubborn fish from the rocks. Again, I preferred Ande line because it doesn't fray like soft line will.

Bait: Scoring a quart of live shrimp was always preferable, but a pound of frozen shrimp isn't bad if it isn't freezer-burned. These fish are hungry in winter, they're not picky like summer trout. On many winter days if our bait even smelled like shrimp; that was good enough.

Best Weather: Ideally you want a warm, incoming Gulf tide rather than some frigid, outgoing tide from the bays. Green water and incoming tide were great. The worst was always a north wind with blue sky, with muddy outgoing tide. But even then you might catch a few fish. If you could hit a calm day out there, or anchor in calm water at least, and the weather is sunny and pleasant, you can actually catch prowling sheepshead under a cork near the rocks. This can be fun, but I've always felt the bigger fish were on bottom, with a better variety down there. Our biggest sheep weighed 10 pounds, 10 ounces, and it was right on bottom in 20 feet of water, the tide moving in fast. If you can handle calm, warm foggy mornings, that kind of weather really turns the fish on.

Best jetties were Sabine Pass, Galveston and Port O'Connor. They're all big and mostly accessible by boat. Not swarming with pedestrian traffic and hungry winter tourists, like the Port Aransas or South Padre jetties. Winter Texans are famous for pinching pennies: They know jetty fishing is free and they have an eye on those tasty sheepshead prowling the rocks. (And sheepshead are much better on the table than, say, any fish back in Iowa, save for walleye).

Small boats are okay at the jetties, but boating experience is a must. Watch the forecast closely. Ideally you want a light, warm south wind. Off Port O'Connor, you have to cross part of a wide Matagorda Bay. If a severe north wind cranks up and your boat is small, either stay on the island and make yourself at home on the porch of one of the cabins, or head southwest in fairly shallow water back to Saluria Bayou and then the winding marsh route back to town. (Unfortunately there are some very shallow sandbars to contend with today, but anything is better than sinking in mid-bay). It also makes good sense to carry a "stranded" bag on these winter trips. Don't count on being rescued if fog settles in, your propeller wraps up a crab trap, or you have motor trouble. Keep that survival bag filled with a six-volt flashlight, Manhandler soup, matches, lighter fluid, a new tarp, bug spray and other necessities to get you through a long night. Something 80-proof is optional.

For many years we fished the jetties with johnboats, but then we were marsh rats who duck hunted for many years with these same boats. Turns out they were ideal for bumping jetty rocks, especially if we jumped out and walked along them. If the wind picked up during the run in, you can bet we hugged the rocks and shorelines on the run back to the marina, even a shallow water route the long way back. Johnboats and whitecaps aren't compatible.

Weather: Keep in mind that it might be balmy at the marina, but out there in the Gulf your luck can run out fast. Get stranded without proper clothing, and deadly hypothermia can set in quickly. A jacket and knit watch cap will go a long ways out there, and keep you fishing in damp fog or if a breeze springs up. Bring a big coat; you can always shuck it off while fishing.

Fish: What's out there in winter? We never saw trout, maybe they were up in the bays. In my experience, it's been almost one hundred percent sheepshead, mixed with some redfish. There are slot-sized black drum out there as well, though they stay over sand bottom close to the rocks. You have to be anchored over sand to find these, and I suppose using small chunks of blue crab would help that cause.

I've explored boating options on the winter jetties. What about walking the rocks? My first trip without a boat out there, on a January day in the ninth grade, ended up with no fish. We'd read in the papers somebody landed about 60 redfish at the end of the Sabine jetties from a boat, so we had our mom drop us off at the end of the road at Sabine Pass, at the pilot station. We then hiked a ways through marsh country, made the jetties, and got a long ways out there. On a jetty never intended for walkers. On a cold and gray winter's day. My two brothers were younger than me but we made it back, just another adventure back when kids could roam free and there were no cell phones. Our winter jetty trips became more fruitful in later years.

Best bet for winter jetty fishing for boatless anglers is along parts of the Galveston jetty, then Freeport, then Port Aransas and South Padre Island. Just don't expect as much action as the more isolated jetties accessible only by boat. Sabine Pass, where a mentor named Martin Verboon, back in about 1982, by himself put 440 pounds of sheepshead in his jonboat without pulling anchor. That was his story, anyway. He sold them, of course. Good thing we have a bag limit of five today.