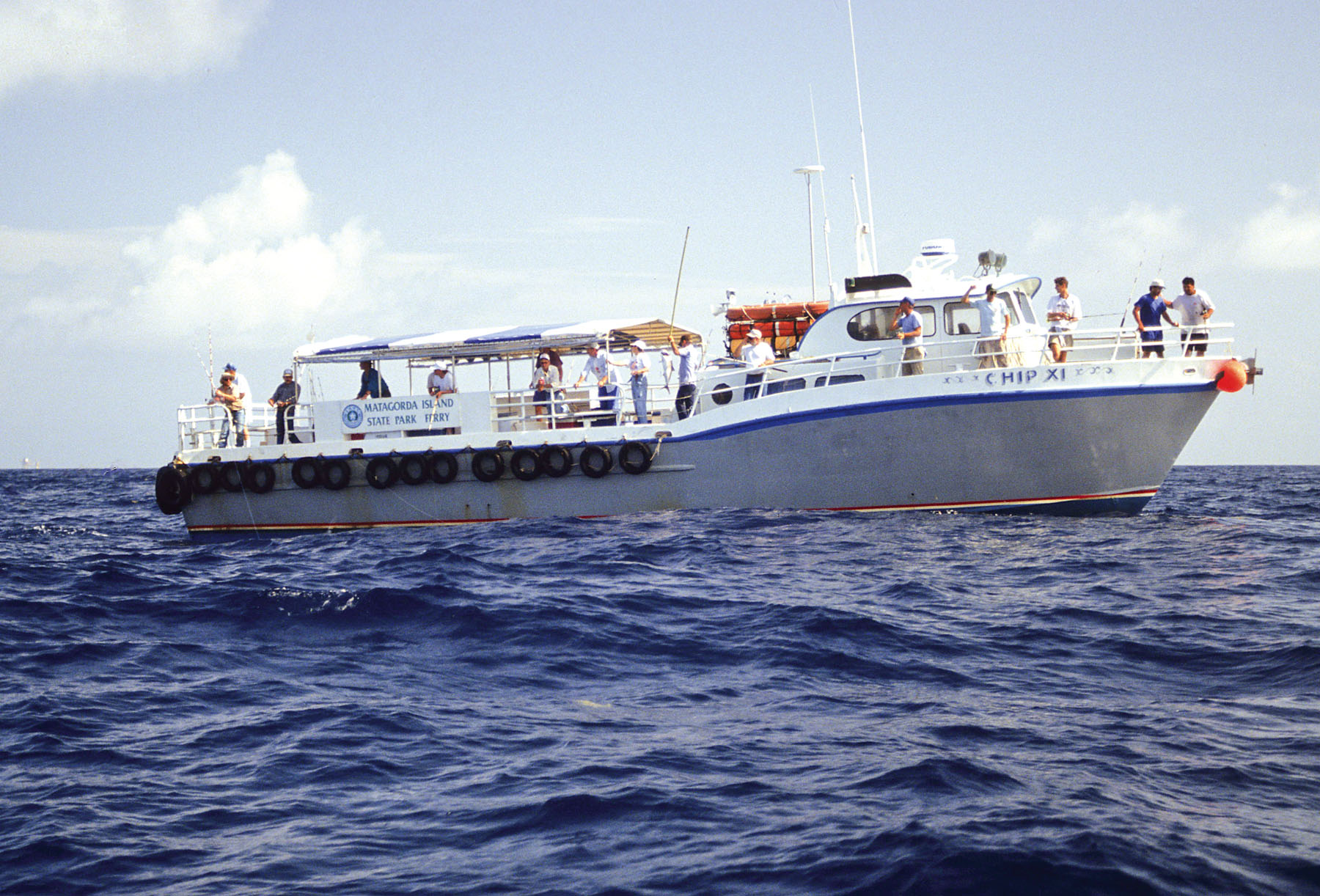 Former Port O’Connor party boat Chip XI makes a snapper drift past a platform off Matagorda Island.
I am not exactly a stranger to Gulf partyboats, with a number of memorable voyages over the years, and in all seasons. Our winter trips saw solid snapper and Warsaw grouper action at the snapper rocks off Cameron, La. and also Sabine, Galveston and Freeport. (I also fished other ports and boats in warmer weather). Some of the boats are gone now, federal mismanagement of red snapper and/or the economy have shut down former party boat operations in Sabine and Port O’Connor, for instance.

Fishing aboard these bigger, safer vessels in winter is a relatively cheap day spent offshore, typical 18-hour trips back in the day, a good deal. The weather is mild out there, even balmy some trips, as opposed to another episode of Deadliest Catch. With offshore Gulf fishing, how else can you meet lots of new shipmates on a long trip, and catch a pile of fish without the cost of owning a boat? (Or trailering it). Toss a big Igloo in the back of the car, and head for the docks. Adventure beckons and we often found it.

One winter trip stands out: We watched the Superbowl on a black and white TV on the big boat during the ride back to port. I have no idea how we got reception, but there we were, watching Miami versus Washington, an epic game. But the fishing that day also stood out. The night before we departed, there was a light snow and fish kill in Cameron harbor, trout floated by the hundreds under the dock. We’d driven in from Port Arthur—at the time we had no local partyboat  at Sabine Pass. (Bluewater was recently retired and Big Momma was 11 years in the future). Anyway, we filled two Igloos full of fine trout, destined for cut bait…It was either use that, or frozen stinky purple California squid provided by the boat.

It was a typical 18-hour trip, back then we always headed offshore at midnight and returned at 6 p.m. Fifty miles out next morning, our chunked trout fillets had a telling effect on snapper; they flew over the rail. Problem was, seas were still choppy after the cold front. I was confined at times to my bunk below decks, while the guys above whooped and hollered. Finally, fishing time was winding down just before lunch, seas were calming, and I eased upstairs. By then we knew the captain had a habit of hitting a few so-so spots, and then visiting his honeyhole on the Calcasieu Rock, for exactly a half-hour before heading in. (No need to fish out his spot in one trip). I just happened to arrive at my post near the bow, as the anchor dropped and the mate paid out rope. He wrapped it off and as it tightened, I lowered down the head of a 3-pound trout on the lowest of my five circle hooks, hastened with a pound of lead. “Swinging for the fence,” as they say in baseball. Soon enough, something ponderous bent my snapper rod to the reel, taking 80-pound line, and the fight was on. Soon enough a huge red shape showed below in blue water, then surfaced. The mate took a headshot with the gaff but accidentally lip-gaffed it, a rarity on a vessel with high sides. Dragged aboard, it was a 25-pound red snapper, my biggest ever.

The owner, Teeboy McCall, came down from his throne and offered to trade my entry fee for that snapper; he wanted to have it mounted in his office. I said okay, and my paltry dozen or so snapper were taken home. But not before we watched the hated Redskins get spanked by an unbeaten Miami team. Oh, it was sweet…while the Gulf slicked out on our ride home. My buddies all caught twice as many snapper that day, but had to pay their entry fee. And back then, that $30 dollars could buy enough gas to drive to Florida, plus a sack of burgers.

Such is the stuff memorable trips are made of. And now that I’m done reminiscing, what’s available on the boats this winter? Red snapper season is closed, but there are alternative fish species available for the big boats still docked in Galveston and Port Aransas.

Winter tuna trips are available. One example is the newer Capt. John, a 75-foot catamaran with Williams Party Boats in Galveston. They offer 40 bunks and restricts their crew to that same number, during the long tuna trips lasting anywhere from 36 to 60 hours. Battling tuna at the deepwater rigs is a kick, and of course the boat stops along the way in somewhat shallower water for grouper and amberjack. Tuna school thickly around the deep rigs each winter. I know this for a fact, having jumped overboard one sunny day for underwater pictures in February, while the crew of Abra-ca-Dabra was fighting a wahoo. Below me 20 to 100 feet down in super-clear blue water, surrounding the platform, swam slowly thousands of tuna. They looked like minnows, but they were 20-pound blackfin tuna, which still have no bag limit. And much bigger yellowfin tuna are out there, too. Might make a good Christmas present, buying a gift certificate for one of those longer partyboat trips. Two Years Before the Mast, and all that.

Warsaw grouper, the big boys weighing up to 300 pounds, move inshore to spawn during winter. They’re commonly found in depths out to 900 feet or so, but 100 feet is often good enough during the colder months. This puts them within reach of all partyboats. If you’re serious about catching one, use a live bait. However, only one Warsaw is now allowed per vessel, so you’d better be first to land one, if you want to haul it home. There are many other species of grouper out there, however.

Amberjack season is open this winter. If you want one, best bring a few heavy-metal jigs about a foot long (see picture). They’re built to sink fast, even in a current. Best tackle is a long stiff rod, eight feet, which certainly stands above short partyboat tackle. The jig is worked with great sweeps of the rod, up and down, and a short rod does a poor job. The rod tip is yanked high overhead, and the jig allowed to settle. The fish typically hit while the jig is sinking. You have to react quickly and slam the hook. I suppose a no-stretch 80-pound braid line would work best, with no stretch and less drag in the current, though we managed with 40-pound mono line in the past.

If you have the only long rod and metal jigs on a partyboat, you’ll likely win biggest fish in the pot, unless someone drags up a Warsaw grouper bigger than, say, 50 pounds. You might also make fast friends with several anglers around you, who may depend on you for their amberjack. Amberjack tend to school, are greedy and almost as good on the table as ling. Miss an AJ and it’s no big deal, there’s probably a hundred more down there. But you really have to work that jig up and down, AJs seldom hit snapper bait. Best keep a 30-pound AJ or bigger, if you’re allowed only one fish per day. I suppose the longer trips involving two calendar days still allow for double fish limits, however.

Kingfish prowl Stetson Rock off Galveston during winter, if your party boat stops there. Kingfish have to winter somewhere, they don’t all run the gauntlet into Mexico or South Florida in southern latitudes. On some winter trips at Stetson the kings averaged 25 pounds and were as energetic as summer; they wore us out. And hungrier; drag a 3-ounce white bucktail jig 20 yards behind the boat as it circles before anchoring, and watch what happens. There are other bonus species at Stetson, such as big African pompano.

Mangrove snapper prefer warm weather, but they’re offshore during winter. One should remember that, when far enough offshore, the weather can be quite warm out there, while chill weather lingers on the coast.

This leads me to deflating fish. Bring a deflator along, which is hypodermic steel of about 1/8 inch diameter, mounted on a wood handle. Any fish to be released should immediately have this steel (or even a clean, thin fillet knife inserted deep under a scale, where the fish’s pectoral fin folds down to the body. Unhook the fish first, because it may wiggle hard when the gas is removed. Never deflate the stomach of a fish protruding from its mouth—that causes peritonitis and can be fatal, according to biologists. Work fast, before the pressured gas harms the fish internally.

Sharp, sturdy fillet knife: Many people won’t have one, for cutting bait or gutting fish.
Small cutting board: Where else to cut bait?
Rough towel: Keep those hands clean and dry.
Knit cap in winter: Pull it over your eyes to sleep, and they also stay on your head in the wind.
Jacket: It can get chilly offshore, too.
Small pillow: Catch up on sleep during the ride.
Sunglasses: Wear them on sunny days or to grab sleep when the lights are left on.
Ear plugs: Cuts the diesel engine noise and nearby chit-chat while you nap.
Favorite tackle: Long, stiff rod for casting and jigging up AJs and tuna.  Short, thicker rod for going deep with bait.
Ice chest: They’ll probably make you leave it in the car, but you do have to haul those fish home.
Sleeping bag: If you can score a bunk or long empty seat on the boat, a mummy bag is mighty nice in winter.
Grab the stern: If available, arrive early and reserve a spot on the stern. All that bait in the water will attract fish from down-current, which is usually dead-astern.