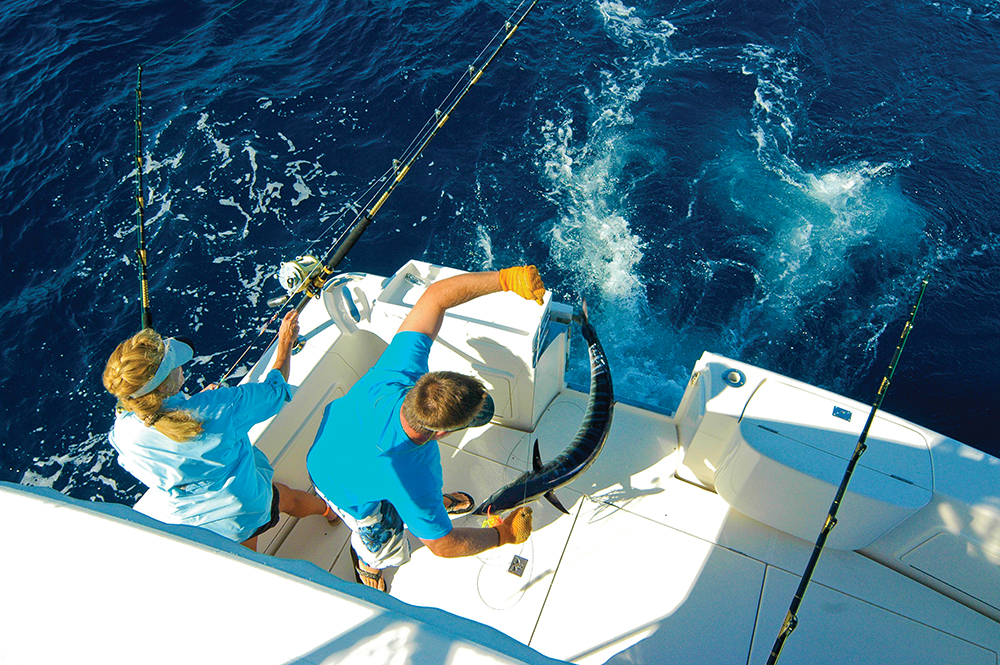 Snatching a wahoo through the tuna door. The mate is wearing flip-flops. Watch those toes!

Coastal fishing is at a low ebb in January, but there’s one fish that peaks out this month, and that’s wahoo. Prowling in blue water all year long, wahoo often are single fish caught by accident. Except during winter, when they actually gather up at offshore pinnacles, such as the East and West Flower Gardens and also Stetson Rock, off the coast of Galveston. They’re way offshore and often can only be reached in winter during “weather windows,” such as the day after a cold front when the north wind subsides. These windows of low wind may only last for half a day, however, before an easterly wind picks up. With luck, the wind might turn to a lucky southeast and blow only mildly, assisting the boats right back to Freeport and Galveston after a day of furious action with these high-performance, ocean speedsters. Off Texas, it’s the big, fast center console boats that can race out to these hotspots and cash in on a winter wahoo bonanza.

On the subject of speed, fishing for wahoo in many areas, especially tournaments, involves the highest trolling speeds in the world, from 15 to 18 knots. Literally plowing along back and forth over a designated mile or so, with four heavy Penn 50-class billfish outfits, 400-pound test cable leaders, often with a 4-pound streamlined lead weight above the leader. And heavy, one and two-pound plastic-skirted baits with quality hooks sized up to 9/0. These fish are so fast and powerful, a big one will occasionally empty one of these marlin-class reels filled with something like 600 yards of 50-pound line. It can be hard work and to compound that, the boat is kept in forward gear while fighting the fish, keeping the line tight. Why? The hook often wears a hole in a wahoo’s jaw, and will drop out without serious, constant line tension. Using this technique, pumping and reeling on a 40-pounder easily feels like a hundred-pounder. After catching a few of these powerful fish, I would imagine the crews have a hard time staying awake, on the long run back to the Texas coast. I certainly would. These days, I wouldn’t go without a beanbag chair and a pair of ear plugs. Wake me up at the jetties.

When we’ve caught winter wahoo, we started out with the all-important dawn bite, trolling slower with lighter Islander trolling baits with a fresh, “horse” sized ballyhoo attached. As the morning progressed, we switched to fast trolling without ballyhoo. One trip we had 11 wahoo strikes, but reeled in only four fish, all modest, identical 40-pounders. We had to pull our lines at 11 a.m. because we were filming a TV show, and they needed footage back at the docks…I wanted to fish all day, but they just wouldn’t listen.

Trolling and covering water is the ticket. Aside from fast-trolling, other options include pulling lipped, diving plugs at five knots or so. A spread of four, wiggling plugs may draw vicious strikes. You want flashy plugs that signal wounded baitfish, though bright colors work too, especially fire tiger. If the same plug catches several fish, set out more of the same.

Live bait is another option. Most big center consoles carry live wells, and it isn’t difficult to stop at a platform and jig up a few blue runners. Which means carrying lighter trout tackle on the boat, of course. Pull up to within 30 feet of the rig, lower those ½ ounce jigs down about 20 feet, and jig away. Actually trolling blue runners requires a much slower speed, however. But it’s worth it, to see a wahoo “sky” jump on a frantic runner. And it’s difficult to beat a live bait. It just doesn’t cover as much ground, trolling that way. The seamounts off Texas involve quite a few acres, and you need to find the action quickly on those short winter days. The fish might be ganged up a quarter mile away.

Wahoo may be built like kingfish and have been confused with kings during tournaments, but they’re different. Wahoo have white meat that is like turkey breast, when cooked. Wandering the world’s seas, they can grow to 150 pounds, and are said to be the world’s fastest fish. Their teeth are smaller than kingfish, but sharp as razor blades, and can easily cut heavy mono leaders rigged for marlin. That’s why serious wahoo trollers use braided cable leaders. Like kingfish, wahoo can jump high and have injured anglers. One wahoo free-jumped right through the porthole of a partyboat south of California, trashing the galley where breakfast was being cooked. Another wahoo in the Florida Keys sat in the fish box for a few moments, then jumped out and clamped down on the nearest angler’s butt, causing serious injury.

Veteran wahoo anglers say it’s best to stick a strong gaff near a wahoo’s head, so it can’t twist around and bite someone in the boat. Boats should carry several gaffs of different sizes, and not some little 3-foot Mickey Mouse gaff used for inshore fishing. If the winter doldrums have you down, a wahoo trip might be the cure, if you have the right boat and tackle, and a weather window.

Wahoo in the Bahamas

If you want to try an adventurous trip this winter for wahoo, without making the long runs off the Texas coast, wahoo season peaks out in the Bahamas from December through February. San Salvador is widely accepted there as the best island for wahoo, located about 400 miles from South Florida, so they don’t get many visiting boats. At least, not the fast center consoles that have competed in winter wahoo tournaments on islands closer to Miami. It’s best to just fly to San Salvador and rent a charterboat. Wahoo exceeding 100 pounds are fairly common there and the locals know where they live. Especially a seamount 10 miles offshore that rises from 4,000 feet up to 180. Small tuna school there and the big wahoo feed on them. A charterboat will run about $1,500 for a “full day,” which starts after breakfast and ends at 3 p.m., which sounds pretty short. However, it may yield more time with hooks in the water, than running a hundred miles out of Galveston or Freeport and back. A Bahamas charterboat is big enough for six anglers, so that’s $250 apiece, not too bad for a short boat ride to where the big ones bite. Covid restrictions now apply in The Bahamas, such as getting tested before arrival. Details listed on their websites.

Bahamas islands closer to Miami and West Palm Beach, in recent years hosted a series of winter wahoo tournaments, but they now have a problem—they got wasted by Hurricane Dorian and are still in recovery mode. I’m referring to Grand Bahamas and the Abacos Islands, where I’ve seen 100-pound wahoo weighed in during winter tournaments—held in wonderfully idyllic weather for January, where everyone wore shorts and these ocean fish are caught only a few hundred yards from dry land and the water was flat calm. Sometimes a winter cold front will reach down that far however, and blow northwest at 40 knots. Those are the days when Miss Amy and I stayed ashore, sipping rum punch and holding on to our hats even on a restaurant’s outdoor patio. On that trip, several dozen big center console boats had to return to Florida the next day in what they said were 15-foot seas while crossing the Gulf Stream current. We could see huge whitecaps a mile below our plane’s window. When that (always) north-bound Gulf current collides with a cold front, look out.