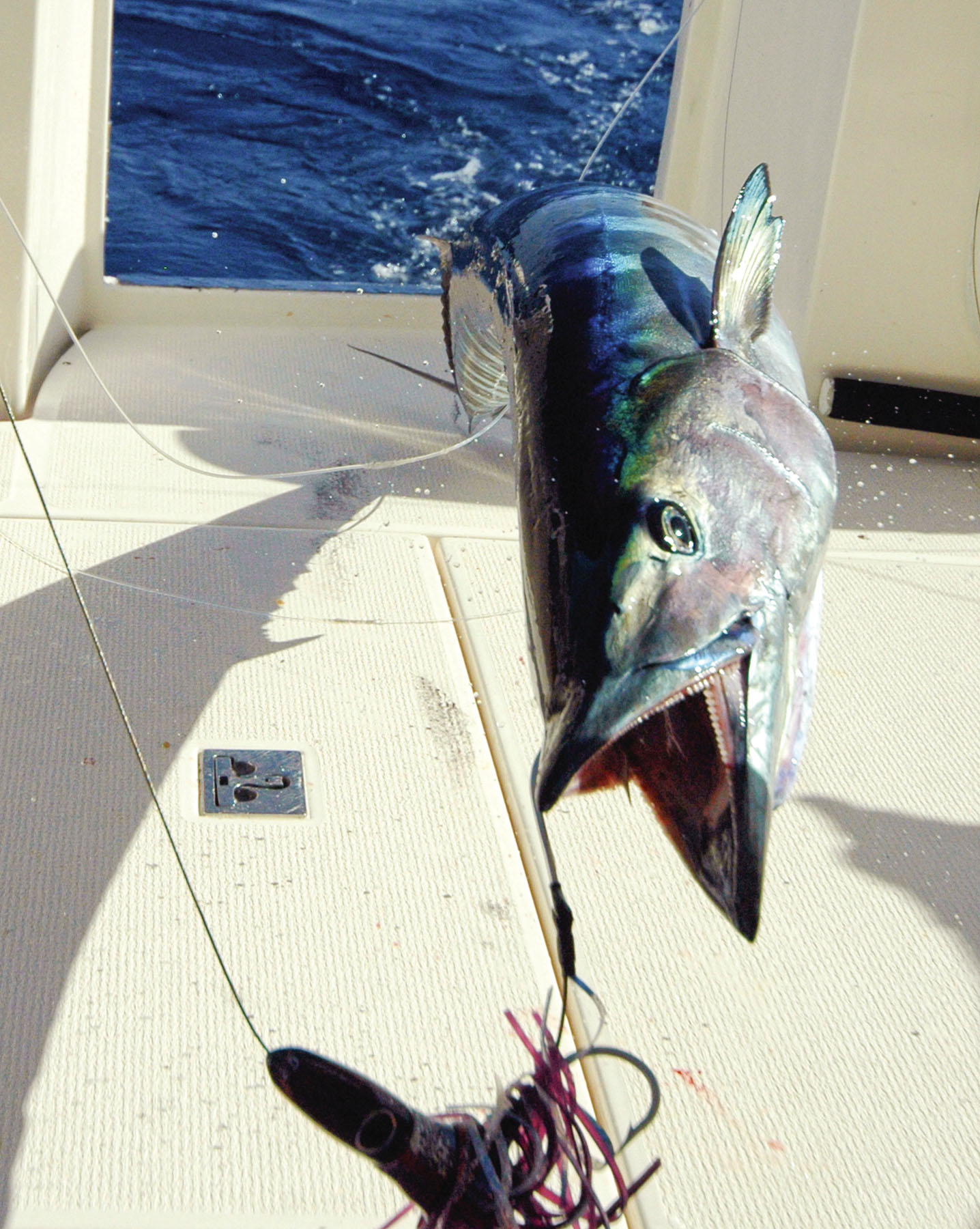 Smaller wahoo snatched through a tuna door, about to be released.
The Flower Gardens reef off Texas very likely offers the best wahoo action in the country, right off Galveston, and these speedy gamesters arrive in early January. Why is difficult to say, but captains who have experienced Texas' annual winter wahoo bite know it's something special.

Captain Bryan Cardwell in Freeport says it may be the best wahoo action in the world, but that covers a lot of ground for this worldwide fish. But Bryan also draws a lot of water among Texas wahoo anglers, so to speak. He's fished the Gardens during winter for 10 seasons, and this new year will make 11.

Two winters ago on Jan. 13, Bryan decked a 142-pound wahoo at the Gardens, a fish now recognized as a record for the entire Gulf of Mexico. He's seen bigger wahoo out there, one of which straightened a 9/0 hook. Monsters out there, that can spool a Penn-50 marlin reel. Catch a fickle weather window and reach this spot by boat, and you could easily have an epic day.

The Gardens are big-fish rich because they're so hard to reach, which means little fishing pressure. It's true wahoo are found off Venice, Louisiana, but a number of guides can reach those platforms on easy day trips, and on many fishable days. Off Texas, you're looking at an overnighter, if you want a decent number of fishing hours. The Garden's isolation and weather "protection" from anglers makes this place a gold mine, but the big snag is actually getting there. And know what you're doing, when you get there...

Fast, modern boats certainly improve the odds. "We've been running 36 and 42-foot center consoles out there. We don't have a set departure schedule, it all depends on finding weather windows. Wahoo are well-known for biting during the first two hours of sunrise, but I prefer not to run out there at night, in preparation for a morning bite. I've found it's better to arrive and fish the evening, enjoy some bottom fishing at night, maybe a drift for swordfish, then hit the morning wahoo bite. That 140-pound wahoo we caught was actually landed in the evening. But it's a long run out there, and you might as well have some fishing time. You also don't have to run as fast as during a day trip, it's just easier on the crew.

"Action out there is really something. We're not sure why these fish visit here each winter. We seldom find anything in their stomachs, or even eggs. Our 140-pounder was empty inside. Makes you wonder what she would have weighed, when completely full."

Running out there and back in one day requires a ton of fuel, versus scant fishing time. During winter, when the days are short and wahoo are daytime-feeders.

Bryan says he didn't pioneer the wahoo fishing out there, by any means. "There are guys who have been hitting these winter wahoo longer than me. We see a few other boats out there each winter and some great people; we share information and have a lot in common, as it turns out.

"One thing that's really necessary out there is rigging up right," Bryan says. "We pretty much use 50-size reels [such as the Penn 50 International] because these are powerful fish, a big enough wahoo could actually spool one of these reels. However, the 50 is a good all-around size."

With a 50 reel, one can actually stand up and crank without too much exertion. Wearing strap-in stand-up gear of course, so you won't drop this fairly heavy rig. We're not talking about trout tackle here.

"Another important item is attaching a 25-foot wind-on mono leader that cranks right onto the reel," he says. "That way, the mate can leader the fish close enough to gaff. Beyond that, past the mono leader, and running through the lure itself, is three to five feet of steel cable, from 125 to 400-pound test. I prefer the lighter test."

"Putting a crimp in the wire cable is a very good idea, because with a hooked fish, the plastic skirt bait will slide down along the cable to the swivel, and you don't want a second wahoo attacking that, easily cutting the mono leader at the swivel. Wahoo will sometimes even attack the four-pound streamlined, lead trolling weights some anglers use on their cable leaders, resulting in slits bit into the lead. Wahoo have small, but lots of extremely sharp teeth.

"I don't use lead weights. I'm not knocking those who do, however. A lead weight tends to wear a bigger hook-hole in the wahoo's mouth, as he dashes around at high speed. If you want to troll deeper when the fish are lower in the water column, you can slow down and set out dive plugs [usually seven-inch Yozuris and Stretch-30's] that will dive down 30 feet. The only problem is that you're dealing with huge fish that can break the baits. Our wahoo are mostly 50- to 100-pound fish, they're pretty rough. There are also disadvantages to using treble hooks with those plugs; you might hook a wahoo in the top of the head, and have it pull loose. Or someone in the boat could get slammed by a loose treblehook still attached to a thrashing wahoo."

Which isn't as much fun, as it sounds.

"Another important item: I only troll three lines. A pod or small group of wahoo are well-known for attacking every passing bait in the spread, and five wahoo hookups at the same time can turn into a fiasco. Better to hook three at a time, get them all landed, and return for more action. If they're not biting, five lures aren't going to help.

"With these bigger wahoo, boat-handling is key to landing them," Bryan says. "They'll typically dump half the spool on a Penn 50, then double back on you. Anglers often think they're lost the fish. But the captain should keep the boat moving forward in gear, keep driving, and let the wahoo make its long runs, then you can adjust the boat's course when the fish makes shorter runs.

As for line on his reels, Bryan doesn't care for the piano wire spooled onto big reels, like they use on wahoo in the Bahamas. "150-pound braid line is a favorite of mine. You don't want a lot of stretch like mono line offers. Braid is thin, it cuts through the water better. It will break if it hits something, but out where we are, there's nothing to hit. But you have to make sure the braid is packed on the reel properly, where it won't bury into itself on the spool."

Sticking a gaff into a big wahoo can be a daunting task; some of these wahoo can make a 40-pound kingfish look easy.

"We've had to put two gaffs into plenty of wahoo," Bryan says. "For a 150-pounder, you're going to need two big

gaffs. If you're picking gaffs I recommend four on each boat, sized from three to eight inches at the curve."

It's easy to lose a gaff on a wahoo. I was on board one boat when a gaffer sunk a long, slim gaff into a 42-pounder. It dove under the hull, and the guy holding it, however briefly, had a problem: he'd lost his thumb a month ago in his carpentry shop, though a surgeon reattached it. Apparently, there is no way to hold onto a gaffed wahoo when your thumb was recently sewed back on. The gaff was ripped from his hand. But that episode had a happy ending: the anodized gaff floated, and the wahoo was patiently leadered back within range of a second gaff. There were no losses, though the gaffer required Advil soon after.

These fish don't come easy. But when they do, they're a special treat.

"There's no wahoo bag limit in Texas, but at 50 to 100 pounds each, we can only carry so many back to the dock," says Cardwell. "And how many wahoo does a guy need? That's a whole 'nother process, icing and cleaning that many pounds of fish properly, treating right what is the finest-eating fish Mother Nature has to offer."

Turkey breast of the sea, that's what I call wahoo fillets fresh off the grill. Except wahoo has a much-better favor than some warehouse-raised turkey that escaped the soup can. We've grilled wahoo steaks only a day after they were caught, and one bite was enough to make your eyes roll back in your head.

But getting your hands on a winter-caught Texas wahoo isn't easy, without a fine weather window that somehow never seems to arrive on weekends. To get them, you'll need a flexible work schedule, your name on a list of go-to anglers when conditions are right, and the fortitude to face the Gulf during a long boat run, that is certainly different from summer's warm embrace.