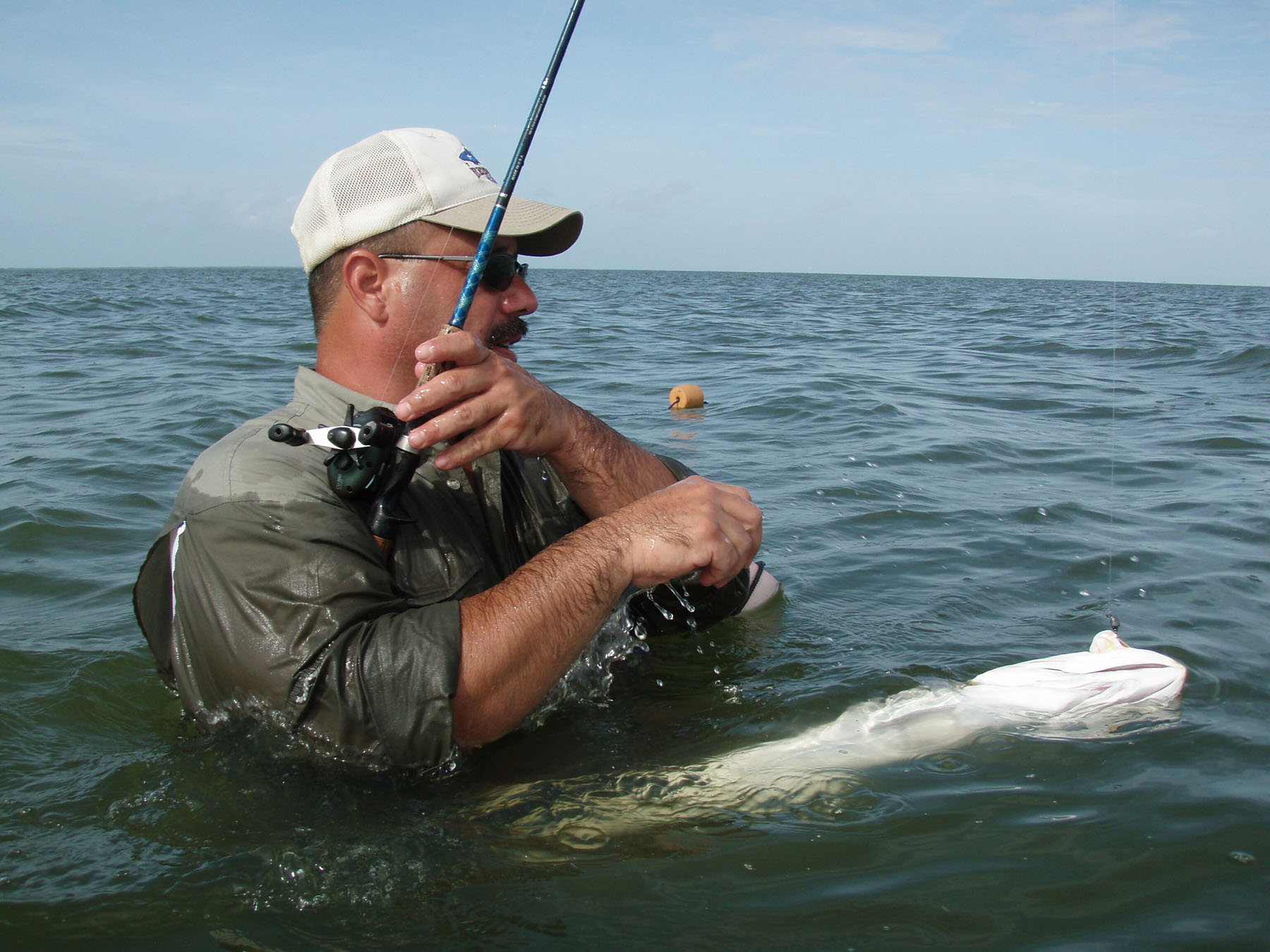 Bruce gave it a good effort, but this 24-incher just never recovered.

Every year for the past three or so my son Sterling and I have gone south to do a night wade with Captain Aubrey Black. This year, though, my good friend Aubrey forgot. Ever happen to you? The good Captain redeemed himself however by calling and telling me that he had set aside the weekend of August 25th for some fishing without customers and that his brother-in-law Bruce Miller and nephew Travis would be joining us for some fishing fun in Baffin Bay.

I hadn't been down to Aubrey's in over a year and was really surprised at all the work he has done. He's turned the garage into a dandy living area for his customers and friends to sleep, play cards, watch television and yes, even eat. Karen, Aubrey's wife, has finally figured a way to get us out of her kitchen. So after much oh and ah about the modifications to his dome-shaped abode; we unpacked the truck and watched a few videos Aubrey had taken recently of Baffin trout.

We had a few cold drinks while rigging our tackle for the next morning, and since we had to get up early, we all said goodnight and turned in; but not before I turned the A/C unit down to 65-degrees. Yes, you could have hung meat in the room, but I sleep better when it's cold and excitement never lets me fall right asleep the night before a fishing trip.

The lights were turned on early the next morning and we were up and getting dressed as fast as possible; Captain Black doesn't not suffer sleepy heads gladly. I did hear him say something about it being too dang cold in our room, though. After a quick breakfast of egg and sausage tacos we loaded up our gear and headed to the boat ramp. Aubrey knows Baffin and he knows it from spending many man-hours exploring it. He's got the bent props and ruined lower units to prove that there are many uncharted rocks located all through the bay system.

One of my favorite times to be on the water is that period just between dark and dawn when you can barely make out shapes against the horizon. That part of the morning would have to wait though because there's no way you could see anything when we left the ramp. I'm talking DARK here folks. The only light on the entire bay was coming from the GPS mounted on the center console of the Haynie 23' Bigfoot and its running lights.

While we were cruising in the dark, Aubrey told me that if I wrote about our trip I couldn't tell anyone where we fished. He mentioned something about loose lips sinking ships and maybe keelhauling me at the Badlands should I reveal the spot. Ooops! Nah, we didn't go there, but it can be a great place to fish.

The southeast wind was up a little but the boat handled the bay well and no one got wet during the ride; which is a good thing, because at dark-thirty the last thing I want to do is get wet before I climb out of a perfectly good boat to do some wading. I know, I have issues, but I'm dealing with them.

Aubrey set the game plan for us as he slowly brought the boat to a windy shoreline. Using lights on the horizon as our landmarks, we all headed in the direction he sent us. We made a large arc that would take us out deep and then turn us so we could cast back to the shoreline about 200 yards from where the boat was anchored. We found fish immediately.

We were using the Brown Lure Company's new Devil Eye in their amber color. I'll admit it felt a little awkward on the end of my line at first since I normally use a smaller bait, but my confidence in the lure was about to go through the roof. The lure casts very well with a 1/8-ounce screw lock lead head and I was muttering to myself that I really didn't like the way it felt on my Texas Wader rod when I felt that familiar thump. I set the hook on a fat 15" trout that I released and I heard the sounds of other fishermen down our skirmish line setting hooks. The wind covered a lot of it but I did pick up an obscenity when a fish was missed, and shortly an, "Oh man, this is a good fish," from someone else.

The fish were deep and they wanted the bait moved slowly across the bottom. It took a while for this to sink in for yours truly, but when it did I was happy to oblige them. When it got light enough to see I noticed that all the guys had their stringers out except me. Hoping to save face, I mentioned that I don't keep trout under 16 inches, and that's why I didn't have any fish on my stringer. They all let me know very quickly that they weren't keeping any fish under 16 inches either. I changed over to the Devil Eye in dark strawberry and renewed my attack. It was a smart move on my part.

I wish I knew how many trout were holding in the area we fished that morning. It took us almost four hours to move 200 yards and we caught fish the entire time. We never left it. Sterling caught a 21" trout that had recently had part of its removed by Flipper, and indeed we had seen a very large pod of the friendly pests come by us earlier; feeding as they went along their way. Injured though it was, it still had an appetite and put up a good fight for Sterling. For about an hour we literally caught trout on every cast.

Aubrey and I were heading back to the boat for some water and to rest our backs when I saw some shrimp come to the top of the water and I tossed the dark strawberry bait in amongst them. The results were immediate and I knew right away that I had a very good trout at the other end of my line. Aubrey double-timed it to the boat to get his camera while I fought the fish. Bruce began heading my way to see if any other Baffin biggies were in the area. I wanted to keep the fish in the water and hooked up for a video but as I led her in around me in circles she managed to shake loose. I should have put the Boga Grip on her, but I was going to let her go anyway, so what the heck. At least we got to see her and I'm not going to tell you that she was thirty inches or more, but I will say if she wasn't, she was close.

There's something magical about fishing Baffin. There is always a chance that the next cast you make will result in that fish of a lifetime, one of those fish that could in all possibility move your name to the right side of the big trout ledger. It didn't happen to us that day, but it could have. That's the allure of Baffin Bay it could happen!

We kept some fish for frying and released all our bigger trout except for one 22 and a 24 that didn't appear to be doing well after removing deeply lodged hooks. I've included some pictures of what was a very good day on the water. But you know what? It occurs just as I am writing this; every day is good when you're on the water. The time is just made more special when you spend it with good friends, new friends, and your number one son.