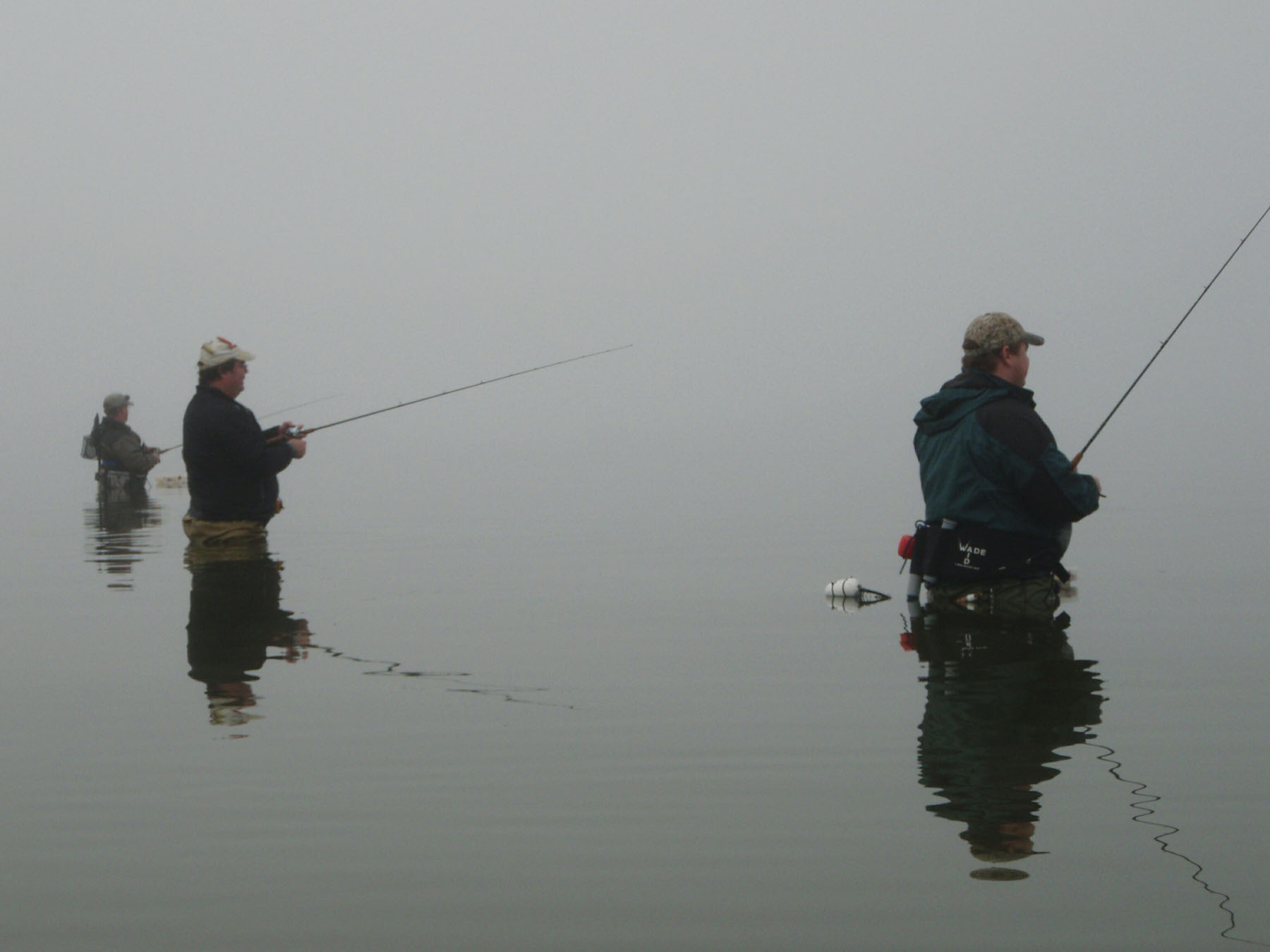 When my friend Mike Horton called me and asked if my son and I wanted to come down and fish Baffin, I looked out the window at the trees bending and listened to the racket the wind chimes were making. My first thought was that he'd lost his mind.

"It's blowing a steady twenty-five here with gusts to thirty," I told him.

"Well the wind laid here and it's supposed to be only about five miles-an-hour in the morning and I'm down here at the house by myself," Mike said.

"Oh and Keith was looking for some place to fish this weekend do you mind if he comes along?" I asked.

We waited on our friend Keith Evans to get to my home in El Campo from Alvin, which gave us time to pack our clothes and gear and to make a quick run to HEB for groceries. Keith arrived on time and we were headed south on US-59.

We pulled into Mike's driveway right at midnight tired from working all day and the two and a half hour drive on a semi-foggy night, said hello, stowed our gear and hit the sheets. I was so tired that I had no problem falling asleep and too early the alarm went off. When it did I was up and getting ready as was everyone else.

Mike's forecast turned out to be right on the money. There was heavy dew on everything with zero wind and I couldn't remember the last time I had been down there that we had calm weather in January. We were stoked! While we were anxious or eager to get into the water, prime time wasn't until 10:00 and, unlike summer, we didn't need to splash the boat in pre-dawn darkness. A lot of other people did though; the parking lot at the ramp showed that plenty of other anglers were taking advantage of the weather.

We arrived at a favorite spot to find some duck hunters with decoys still out so we went on to our second favorite spot where we found no boats and a lot of bait in the green calm water. Mike stuck the Power Pole and we quickly exited the boat and spread out casting topwater baits and soft plastics. From Spooks to Skitter Walks, soft plastics, and a Corky or two or three, I fished for an hour with no blowups, no swirls (other than those made by bait I pulled my lures through) and no action at all. I had started fishing my way back to the boat and I saw Mike waving to come pick them up so once I had stowed my gear in the Mosca I idled down the shoreline to get them. No one else had caught anything or even had a bump so it was on to our third spot.

Mike had said that there had been a lot of redfish holding at the next place we went and he was right. Ten minutes after shutting down, barely managing a drift in the light wind, we could see redfish tailing on the mud flat we were on. I took some pictures but for some reason they do not show up on my camera and I have no idea why. I've tested the camera and it works fine. Probably operator error on my part but it's never happened before. I just hope it doesn't do it when I'm taking pictures of a trout that could put my on the ten pound side of The Ledger. We tried to entice the reds into taking our baits but only a single 21-incher was fooled. The rest simply moved a wake towards our lures then snubbed them and continued feeding along their way. We had one more spot to try so we headed that way.

We were all puzzled at the lack of action, what with the ice cream conditions that we had, but all we could do was continue to look for fish and hope that we would find some. It's on days like that one that I'm glad I'm not a guide responsible for putting my clients on fish; so far it had been a pretty rough day of not catching anything notable.

At our third and final spot we again found pretty water and lots of bait and I actually had a bump on a soft plastic. My son Sterling stuck a trout but it was an inch shy of being legal. Other than that all the rest of us stuck were rocks. We quickly decided that our best course of action was to head back to the ramp, load up and fire up the pit. We talked to a lot of fishermen at the ramp who shared the same experience that we had; lots of bait, beautiful water but no fish to be caught. In fact a quick check of the cleaning table showed that it hadn't been used that day. While it made us feel better to know that we weren't the only ones to have been skunked, it still had us wondering why.

As you can imagine the "whys" of not catching any fish was the topic of discussion that evening and while we had theories we had no real answers, only supposition. Plans were made to try a different area of Baffin the next morning. It's happened to all of us before and as I have written in the past there has to be a reason for it but perhaps it's a combination of things. All I know is that we were fishing pre-frontal conditions in gorgeous 71° water with plenty of perfect sized mullet swimming around unmolested and, the fish, if they were there, didn't want anything to do with us.

When we got up the next morning we were greeted with completely different conditions than the day before. Strong winds were blowing and hard enough that given our experiences the day before we decided to pass on fishing and decided on breakfast, more coffee and conversation before packing up and driving home.

It is the attitude of my son and I and all of my friends that not catching fish doesn't make for a wasted trip. Just being out on the water with good friends and fishing with my son on a beautiful day offsets the fish not cooperating. And while I'll take blowups, hookups and catching all day long, I'll always be happy to have had the chance to try.

Hunting season is over for me so I sure do hope that my catching improves pretty soon; I'll let you know one way or another.