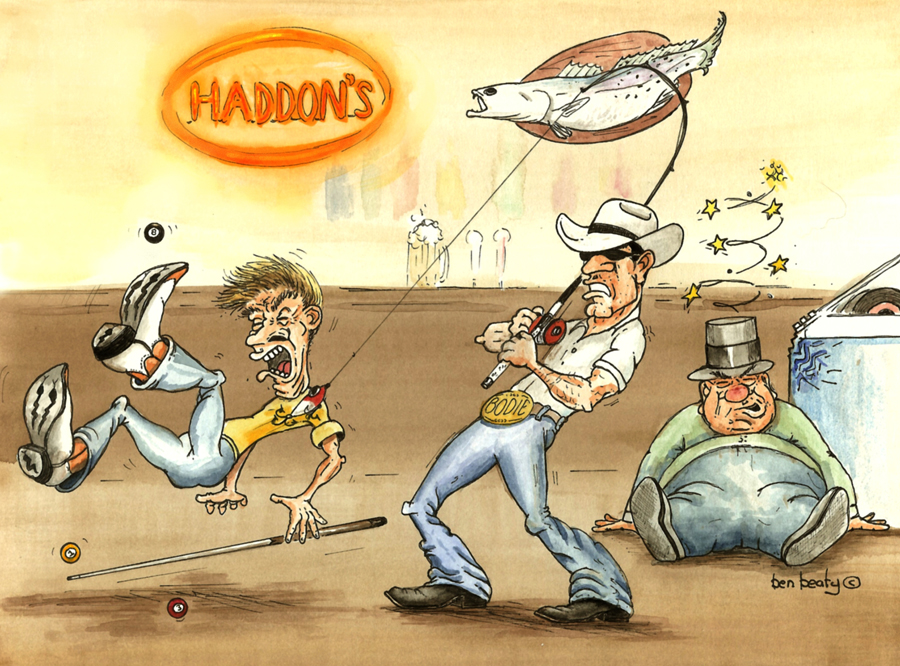 Bodie Allen had strung his eighth flounder and figured that it was time to head back to the boat. His friend Tommy was huffing and puffing trying to keep up with Bodie's long stride and was struggling with the lantern and gig he was carrying. He had only one flounder on his stringer and was carelessly dragging it behind him on the sand. Suddenly, Bodie stopped walking and turning towards the bay, turned his lantern off and just stood there staring out into the darkness. "You hear that Tommy?" "Hear what?" asked Tommy "All I can hear is my own heart pounding. Can we please slow down a little?"

Bodie turned and told Tommy to turn his lantern off and when Tommy started to protest a curt look from the big man told him he wasn't kidding and Tommy complied. Standing in the darkness on a hot summer night wasn't exactly Tommy's cup of tea and he started to imagine all sorts of things; rattlesnakes crawling over his feet, bats getting tangled in his hair, and when he imagined Karankawa Indians moving about in the salt grass he couldn't stand it anymore and was about to complain when Bodie whispered to him. "Do you hear those cattle Tommy boy?" And by gosh Tommy could hear cattle, but there was only water out there, what in the world would cattle be doing out in the middle of the bay?

He was about to ask Bodie just that when Bodie said, "Rustlers!" "Someone is stealing Mr. Connor's cattle and barging them out of here." "Bodie, rustlers have guns and stuff, let's get out of here!" Tommy said. Bodie said nothing in reply; he just stood there staring out into the dark bay, his jaw clinched and when the sounds of cattle could no longer be heard he told Tommy, "Let's go."

Stumbling in the dark and trying to keep up with his fast moving friend, Tommy ran into the broad back of Bodie and face first into one of the flounder that were hanging by a stringer over Bodie's shoulder. The sharp teeth of the flounder found Tommy's nose and he screamed in pain. Even Bodie jumped a little at the sound and figured that a rattler must have hit Tommy or that he stepped on a dead hard head or something. Bodie lit his lantern and in the glare he saw Tommy sitting on the sand holding his bloody nose, his lantern and gig lying in the sand. "Quit fooling around, pick up your stuff and get in the boat!" Bodie said. "I want to get back to Port O'Connor and check on some things before daylight."

Tommy stowed his gig and lantern and feeling the teeth marks on his nose with his fingers he climbed into the flat bottom boat. Bodie shoved off from the shore, jumped in and started the small outboard. The short ride back to the docks was a quiet one with Bodie deep in thought and the only sound other than the hum of the motor was Tommy groaning each and every time he felt his now swollen nose.

The next morning Bodie paid a visit to his boss Mr. Connor, filled him in on the events of the night before and together they drove to the holding pens down at Crown Point. Sure enough there were nine steers missing that were being held there prior to moving them to another pasture. The tracks left by the cattle led to an old channel that was used by an oil company years ago. The channel was about a foot deeper than the surrounding water and was just perfect for a small cattle boat. The two cattlemen stood there by the water looking and figuring how the crime was committed then headed back to the truck.

Mr. Connor was not a happy man and told Bodie that he was going to contact the local sheriff and file a report. Bodie however had another idea. He asked his employer and old friend to hold off on contacting the local law and give him a little time to have a look around and do some investigating himself. Mr. Connor looked at Bodie and asked what was on his mind and Bodie simply said, "They took them on my watch and I'd like to think I can get them back." That was good enough for the old rancher and Bodie told him what he knew on the ride back to the ranch headquarters.

That afternoon Bodie walked into Haddon's Place and found the usual group of fishermen and cattlemen hanging about and Tommy and someone Bodie didn't recognize playing pool. Bodie sat down at his usual place at the bar and Eloisa the bartender brought him a hot cup of coffee. "Heard y'all lost some cows last night Bodie," Eloisa said. Bodie grimaced and asked, "Did Tommy tell you that Eloisa?" "Nope, heard three guys talking about an hour ago that they'd heard some cows got stolen from the Connor place last night. "These guys still around?" asked Bodie. "Two of them left about 15 minutes ago but one's still here; he's over there playing pool with Tommy." "They've been buying him beer in here for the last week or so and he's been hanging around with them when they're in here."

Bodie moved over to the jukebox and nodded to his friend while the other guy took a shot at the eight ball. Bodie looked down at the man's boots and smiled. "How's your nose today Tommy?" Bodie asked. "Sore as heck Bodie, I can't even touch it and the wife put alcohol on it last night and this morning and that just made it hurt worse." "Did you hear that last night Mr. Connor lost 50 head of cattle?" The stranger looked up and said "50 head, no way we only took" The man made a move to run but Bodie was faster and grabbed him by the arm and swung him around and right into Tommy who fell into the jukebox and busted his already battered nose right on the Wurlitzer logo. Tommy screamed in pain–again.

The cattle rustler made another run for the door and Bodie reached up and grabbed an old Lamiglass rod with a mint Ambassadeur 5000 on it that had an old Super Spook tied to its line. It did make for a nice decoration in the bar and as Bodie found out still cast just fine. The big lure with three treble hooks sailed over the right shoulder of the thief as he ran and Bodie set the hooks with all his strength. "I swear Tommy this old boy screams louder than you do when he's got something ailing him!" Bodie said. Bodie handed Tommy the rod and reel and said, "Here, hold a tight line on him for a minute while I ask him a few questions and if he don't want to talk, well just you try walking the dog with that old lure and stiff rod a few times and we'll see what he says then."

The thief confessed to everything and gave Bodie the names of those involved. The Sheriff's department recovered the stolen cattle and the boat used in the thefts and carted the thieves off to jail. Two paramedics worked on Tommy's nose while he screamed and finally got the bleeding stopped. Bodie thought Tommy looked a lot like a shorter and fatter W. C. Fields.

The next morning Bodie was casting towards some mullet that were being harassed by some good sized Trout. As he was stringing one Tommy had to ask. "Bodie, how'd you know that fella I was playing pool with was involved in stealing Mr. Connor's cattle?" "I thought they were pretty good old boys." Bodie looked at his old friend and smiled. Said, "your pool playing buddy was wearing Texas Two Step snake boots and the tracks leading from the holding pen down to the water Tommyone of the rustlers had on a pair of Texas Two Step snake boots." "Those boots have a snake design imbedded in the heel and it leaves a pretty nice track." "But Bodie, a LOT of people wear that type of boot here in rattler country, how'd you know it was that old boy?" asked Tommy. "Well you old son of a gun, when Eloisa told me you had been hanging around those fellas it was pretty easy to figure out it had to be them." Bodie replied. "Tommy, the only person besides me and Mr. Connor that knew those cattle were at Crown Point were some of the ranch hands that have worked for Mr. Connor for twenty years and you." "I told you that I had to get those steers moved over there and you were the only other person who knew." "When Eloisa told me that you'd been hanging around here with some strangers who were buying you beer I figured maybe the subject of those cattle may have come up in conversation." "Then when I saw those boots on your new friend, well let's just say it all came together."

Tommy looked at his friend with his mouth open and his swollen nose throbbing and said, "So it's my fault that Mr. Connor got his cows stole?" Bodie looked at his friend, shook his head no and said, "Let's just forget about the cows and concentrate on these Trout–when they leave they don't leave tracks that are as easy to follow as those made by Texas Two Step snake boots."