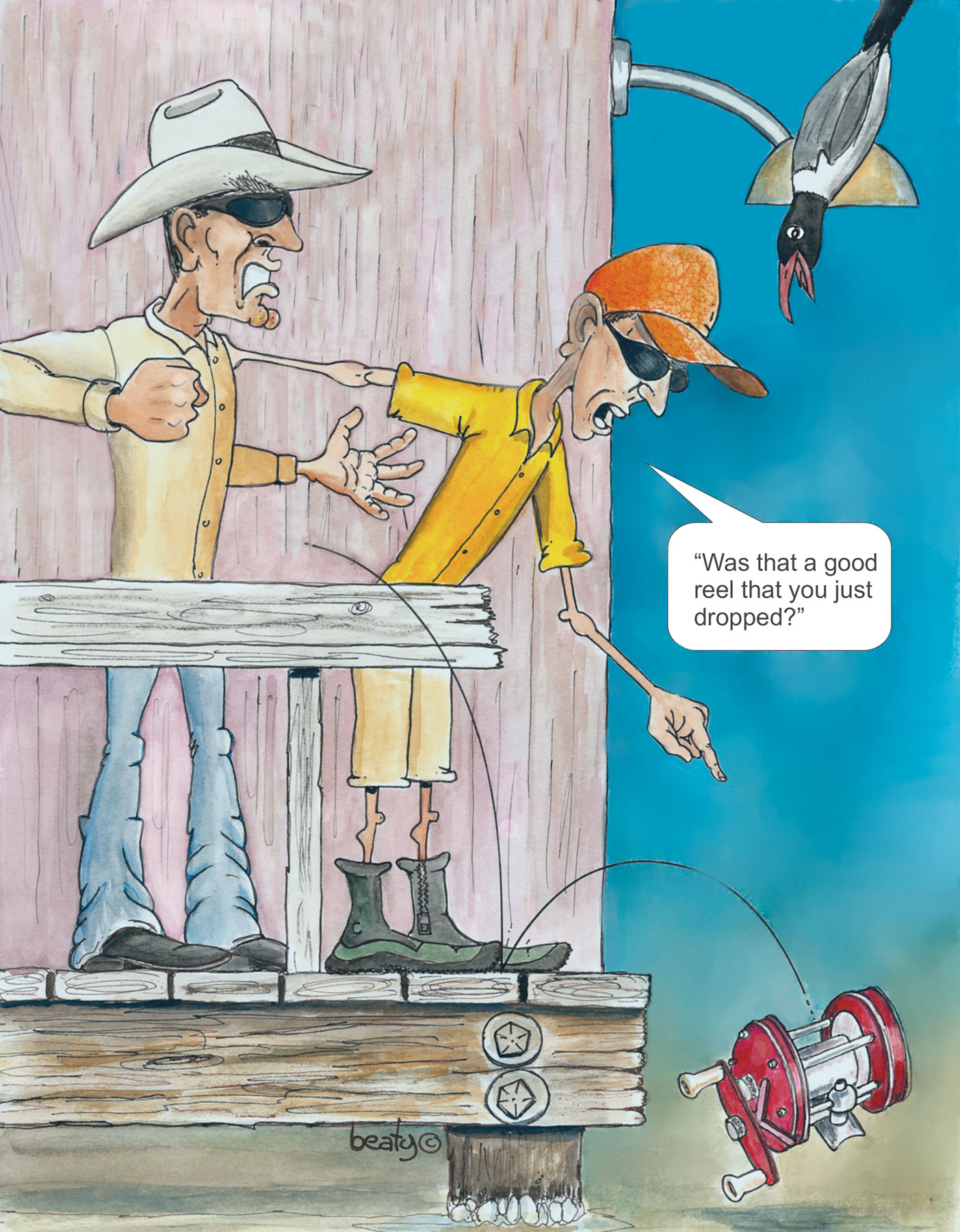 Bodie was at his boat stall busily hunched over the combination work and junk bench that he had there. He muttered under his breath as he rebuilt an old Ambassadeur 5000 reel that his Dad had given to him when he was a kid. "Swedes must have hands as small as the Japanese do."

Wiggling the side plates clear of the frame on the antique he felt a little sad as he saw the results of his neglect on the treasured reel, the one that had set the bar for all casting reels so long ago. There was so much corrosion, salt and sand that cleaning it wasn't hardly an option. One of the things his Dad had told him when he gave him the much sought after reel of that era was to "take care of it and it will serve you well son." Well he hadn't taken very good care of it in the later years. Newer reels had come along that had caught his attention and the old "red reel" just sat in its leather case on a shelf in his store room and Bodie hadn't cleaned it after a wade fishing trip to the surf.

Bodie had found an almost new 5000 at a flea market a few weeks before and bought it with the intention of gutting it to rebuild the reel his father had given to him. Work at the ranch and just nasty cold weather had kept everyone busy feeding and moving cattle from one pasture to another and today was the first day that he'd gotten a chance to devote some time to tackle chores.

After cleaning out the reel he felt a little better since there was no serious damage to the side plates. Just a little "boat rash" showed on the outside and he began to feel a little excited to be giving new life to the reel that had served him so well for so many years.

He had just gotten the anti-reverse dog in place when a jolt to his back caused him to drop the reel and in his horror he watched it hit the edge of the work bench, bounce to the plank floor and roll into the eight foot depths of his boat slip. The bottom there was soft gooey mud at least a foot deep.

Things were about to get mighty ugly in that boat house.

"Whatcha workin' on Bodie?" asked Tommy Meyers as he watched the reel plop into the water. "Was that a good reel that you just dropped?"

The instant anger on Bodie's face frightened his long time friend and Tommy took a step back fearing what Bodie might do next.

Bodie though didn't yell and he didn't grab Tommy and throw him into the harbor; the big man simply sat down on the stool at the bench and stared down at the water. Tommy should feel mighty lucky that it was he and no one else who had startled Bodie with that backslap.

"Are you okay Bodie? Did I cause you to drop that reel? Man I sure am sorry buddy but I'll sure buy you another one," Tommy blurted hoping to calm his friend.

Bodie could tell that Tommy was sincere and told Tommy the story behind the reel. Tommy felt really bad about the whole thing and offered to buy Bodie dinner and a few cold beers at Haddon's. Bodie just sighed and told his friend that no, he was going to head on home and call it a day and waited for Tommy to head out the door so he could lock it.

Tommy headed to Haddon's Place and ran into Captain Red who was just climbing out of his jacked-up golf cart. "What are you up to you ignorant freak of nature" Red asked.

"Now don't go starting on me already Red, I feel bad enough right now as it is," Tommy whined.

Red could see that something was really bothering Tommy and he almost, just almost, felt sorry for him. "I haven't seen you this down since you got sick after eating whipped goose liver," Red chuckled.

"Who told you that, I , oh it don't make no difference, I really screwed up this time Red, serious bad. I just really made a mess of things," Tommy cried.

Well even old Red was a bit concerned. Hell, and even a dumb old stray dog needs a pat on the head now and then. So Red told Tommy, "Let's go inside, grab a table and a beer, some supper and you tell me what's ailing you."

Eloisa was tending bar and there was a fair crowd for a week night. The juke box was playing an old Johnny Duncan song and Red and Tommy grabbed a table near the back of the room. A waitress named Belinda Sue took their order and said to Tommy, "You look terrible Tommy; are you sick or did you eat some more of that whipped goose liver?"

Tommy looked up with sad puppy-dog eyes then down at the table again and Belinda looked at Red who just shook his head and told her to bring them a pitcher of beer and two mugs. "And put that on Tommy's tab," he added.

When the beer was set before them Red poured each a mug full and told Tommy to tell him what was going on. Red listened as Tommy told the story of how he had gone to Bodie's boat stall and had accidently caused the special reel to go into the water.

"Well, I don't know what to tell you Tommy," Red sadly said. "You really messed up and even if you found another reel to replace the one you made him drop it won't be the same because it's not from his father.

"I know that Red, jeez I already know that and I've been racking my brain trying to figure out what to do. Bodie's really upset and I ain't never ever seen him look like that before," Tommy cried.

Red stared into his beer for a bit then looked at Tommy and asked, "Do you know the exact spot where that reel fell off the dock?

"I'll remember that for the rest of my life" Tommy said.

"Well then meet me at Bodie's stall in thirty minutes and let's get that reel back," Red said.

"Uh ain't you hungry Red, I mean all this sadness and stuff has made me powerfully hungry" Tommy whined.

"You can feed your face on your own time Tommy. Thirty minutes and if you're not there you'll get no help from me," Red snarled.

Tommy had Eloisa fix him a cheeseburger and some fries and he was still munching when Red pulled up to Bodie's boat stall. "What are you eating Tommy?" Red asked.

"I had Eloisa make me up a quick cheese burger and some fries," Tommy smiled as chewed.

"Well great, I've not had any supper so when we get that reel back I know that you'll be glad to follow me back to Haddon's and buy me a nice chicken-fried steak for my supper," Red scolded.

Tommy noticed the sack Red was carrying and asked what was in it. "You'll see soon enough you pathetic poster boy for Misery Incorporated, now open up that door." Red yelled.

Now Red was giving Tommy a look almost as bad as Bodie had given him and the feisty former boat captain tore into him with a verbal assault that would have made a Marine DI blush.

Bodie's boat slip was at the end of a long row and next to it were some open boat docks. Red looked at the dock that ran the depth of Bodie's stall and figured that all a person would have to do would be to walk that dock then slip around the corner and into Bodie's slip. Tommy didn't like the plan at all and told Red as much.

"Well too bad Tommy; you got yourself into this mess and you're going to get yourself out of it, with my help of course." Red snapped. "Now get your butt down on that dock and climb around and open the damned door; I'm hungry," Red fired back in a rough voice.

Tommy whimpered but did was he was told and made it to the end of the dock. Tommy realized that stepping around the corner wasn't going to be easy and the landing in Bodie's stall was much higher than the dock that he was standing on. "You'll have to come give me a boost Red," he called out.

"I'll give you a boot is what I'll do if you don't hurry up," Red threatened.

Tommy thought about it but knew he couldn't make it so he walked back to where Red waited.

"Let's go get my boat and I'll dock us up at Bodie's slip Red; it will be a whole lot easier and there's less chance that I'll fall in," he pleaded.

Red thought about it for a minute then agreed, so off they went to get Tommy's boat.

Idling up to Bodie's stall and Red told Tommy to just hold up for a minute. From the sack he removed a big chunk of steel tied to a rope. "What IS that thing you got there Red?" Tommy asked.

"It's a magnet, you lame brain, a really powerful magnet, and we're going to pull that reel up with it." Red said.

Tommy started laughing and almost swallowed his plug of tobacco and told Red with a laugh that the Ambassadeur reel was made of aluminum not steel and a magnet wasn't going to work. Irritated, Red told Tommy that there was enough steel in fishing reels and his magnet would find it.

Red lowered the magnet into the water and when he found the gooey bottom he worked it side to side. "Are you sure this is the spot where it fell in?" Red asked.

About then Red felt a "thunk" through the rope and knew that the magnet had hooked on to something. He pulled it up and attached to the end was what appeared to be an old Bowie knife.

"Hey, I remember that knife!" Tommy yelled out. "Bodie used to keep it on his work bench and I was going to show him how I could throw it and stick a piling. I kinda missed and it bounced off into the water." Tommy said with an impish grin.

Red just glared at him and tossed the crusted relic onto Bodie's dock. "I'm going to turn on some lights and you tell me right where to stand so we can find that reel," Red ordered.

Red climbed out of the boat, turned on the light, and with Tommy's instruction lowered the magnet again. In just a few seconds he had another thump. This time the magnet had latched onto something unidentifiable but Red tossed it up onto the dock anyway. Time after time he lowered away and each time he found some other corroded artifact, but no reel.

"I give up," Red huffed in defeat. "Meet me at Haddon's and I'll let you buy me supper then come over to the house and I'll give you a new reel you can give to Bodie. That's the best I can do."

Just as Red was about to climb back down into Tommy's boat the boathouse was lit up with red and blue lights from an approaching boat.

"Keep your hands where I can see them boys!" a stern voice ordered from behind a blinding spotlight.