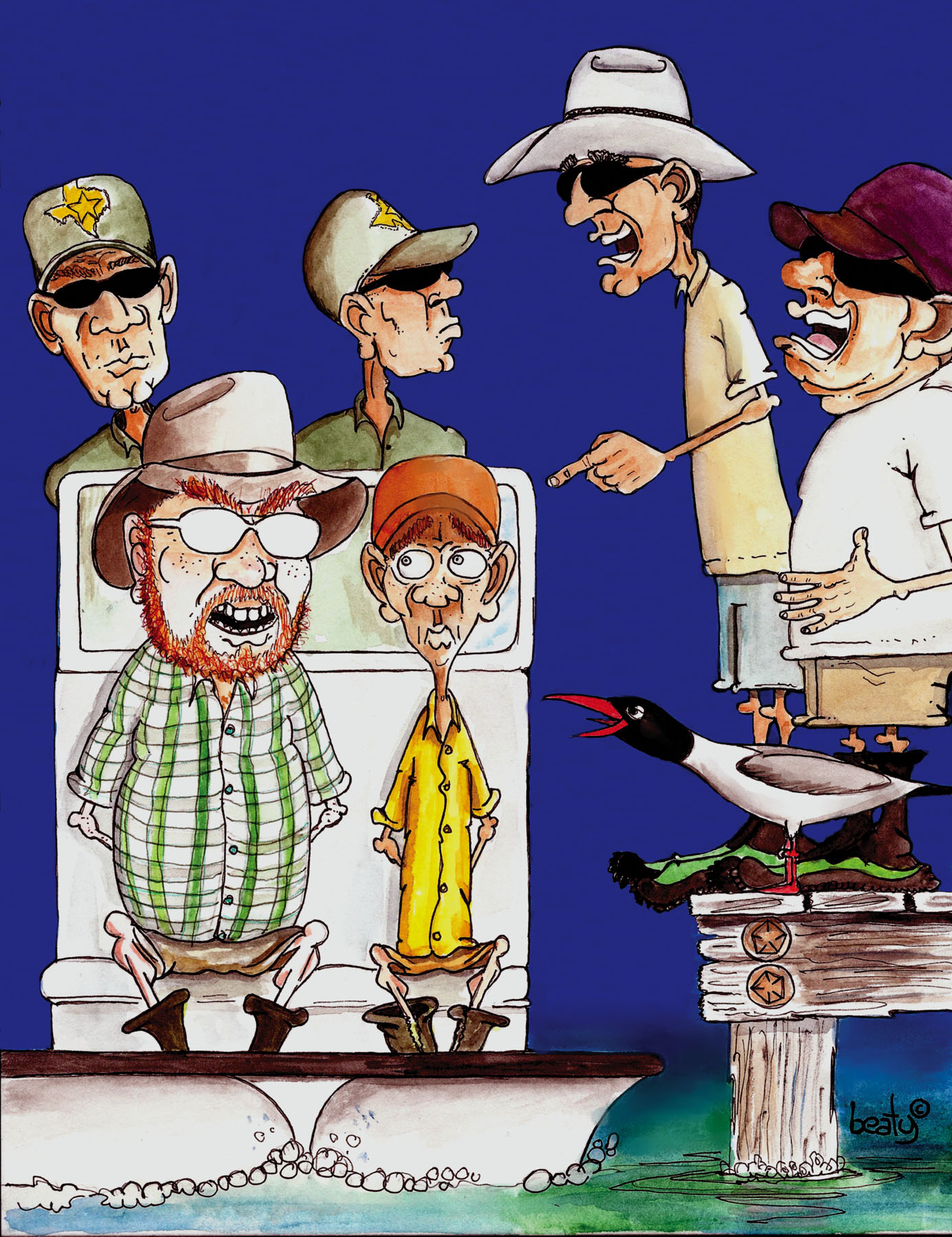 Two Texas game wardens pulled up to the stern of Tommy's boat, purposely blinding them with their spotlight, ordering Tommy to remove the key from his boat's ignition.

"We've been up here from South Texas for almost a week now staking out this boathouse due to all the recent burglaries and prop thefts and we've come up empty-handed until tonight," one of the wardens said from behind the bright light.

"Now you boys just hold on a second," Red said.

"Yeah, you just hold on there," Tommy chimed in, bolder than himself in Red's shadow. "The only reason we're in here with my boat is because the door was locked and we don't have a key," he squeaked meekly, suddenly remembering who he was talking to.

"Well that sure sounds logical to me; thieves don't always use keys," the other warden informed him rhetorically.

The wardens put life jackets on Tommy and Red and then applied handcuffs, much to the humiliation and disdain of Captain Red.

"Bodie should have drowned you when he had the chance," Red snarled to Tommy. "Now I'm going to have to do it instead."

Tommy began whining to the wardens telling them exactly how the day had played out and how they were only trying to retrieve the reel. Red even told them to call the owner of the stall and gave them Bodie's cell phone number.

The wardens said that they would definitely give him a call but that they would do it from land, and much to Red's horror they motored up to the busiest boat ramp in town. Red saw the mouths dropping open and could almost hear the whispers as the night fishermen saw Ol' Red handcuffed in the warden's boat.

"Nah, Ol' Red don't need no fishing license, he's grandfathered in because he started fishing before there were any licenses," another fishermen sputtered between belly-laughs.

"Who's your partner in crime there Red, why is that Lil Tommy Meyers?" The whole dock erupted in laughter.

Once on land the wardens phoned Bodie while Red and Tommy slumped on a bench just outside of the combination bait camp, general store and hamburger joint.

"If you got fifty bucks, I've got a hacksaw in my truck Red," somebody cackled from the darkness.

"Careful what you say there, I won't be in these cuffs for very long," Red shot back at the wisecrackers.

"The owner of the stall is on his way up here and if your story adds up and he doesn't want to file any charges we'll be letting you go," the taller of the wardens informed them.

When Bodie got to the dock and saw Red and Tommy handcuffed together he started laughing so hard that he had tears in his eyes.

"Well you caught you a couple of real desperados here boys," Bodie said to the wardens, slapping his thigh.

"I sure do and I hate to tell you that you did not catch your thieves with this pair," Bodie said while still laughing.

The shorter warden stepped forward and began removing the cuffs from Red and Tommy and everyone shook hands. The wardens headed back into the ICW in hope of catching some real crooks.

"Oh I have to hear this story, so which one of you is going to tell me all about it?" Bodie asked with tears still streaming down his face.

So Tommy and Red told Bodie all about it. How Red had a big magnet and that they were just trying to get Bodie's reel back for him.

Bodie suddenly felt mighty sorry for his two friends and almost didn't have the heart to tell them, but he did.

"Boys, I was so heartbroken when that reel fell into the water that I just went to the house, sat in my chair and stared at the wall. But then I got to thinking about that reel and it having a little steel in it and all, so I borrowed a large magnet from one of my oilfield pumper buddies and went back to see if I could snag it. Would you believe that I got it on my very first try?"

Red muttered some profanities that even Bodie had never heard before but Tommy was so happy that Bodie had his reel back that he was, well... just happy.

The wardens had towed Tommy's boat to the dock when they brought them in, and as Tommy headed for it Red stopped him.

"Nope, I'll take the boat back to the dock where my truck is and you can have it from there. I need some fresh air and I need to be away from you two," Red informed both Bodie and Tommy.

So Bodie gave Tommy a ride back to his boat stall and they had a beer from the fridge while they waited on Red.

"He sure is taking a long time to get here Bodie" Tommy said.

"You're right about that Tommy; it doesn't take this long to get from there to here," Bodie said with a worry.

Just as Bodie was contemplating lowering his boat to go look for Red they heard a boat turning into the harbor from the ICW and sure enough it was Red.

"Hold on to him and don't let him get away Bodie; he's dead meat," Red said while pointing at Tommy.

"What's got you all riled up now Red?" Bodie asked.

Red waved a piece of paper as he put the bow against the stall piling. "No anchor light, an expired fire extinguisher and no throw cushion is what's up!" Red screamed. "And as the two nice Wardens pointed out to me after I told them that this is NOT my boat, I was the Captain and I'm responsible," Red said. "So hold on to him for me and help me up out of this boat because the last few minutes of life as he knows are ticking off fast!"

Bodie turned around to find Tommy pressed up against the refrigerator, eyes wide and mouth open, and told him to head to his house pronto.

"No, you'll go to MY house and you'll wait for me there!" Bodie muttered in a low tone. "I'm taking Red to Haddon's to buy him a beer and some supper to get his mind off of you."

"Oh I get it. Would you please bring me back a cheeseburger and some fries?"

Tommy ran out of the boathouse and threw a ton of dust into the air as he left for Bodie's house. Bodie tied Tommy's boat off and helped Red up on the dock. To Bodie's amazement Ol' Red shot by him like a rabbit to the parking lot, nothing left of Tommy but the squeal of tires in the distance.

"Where'd he get off to Bodie? So help me I'm going to have to remove him from the gene pool!" Red yelled.

"How about I meet you at Haddon's, buy you a few beers and one of Eloisa's tender-grilled T-bones instead?" Bodie offered.

"Well I guess I can kill him later. I'll meet you there," Red chuckled. "You know he deserves every bit of it."