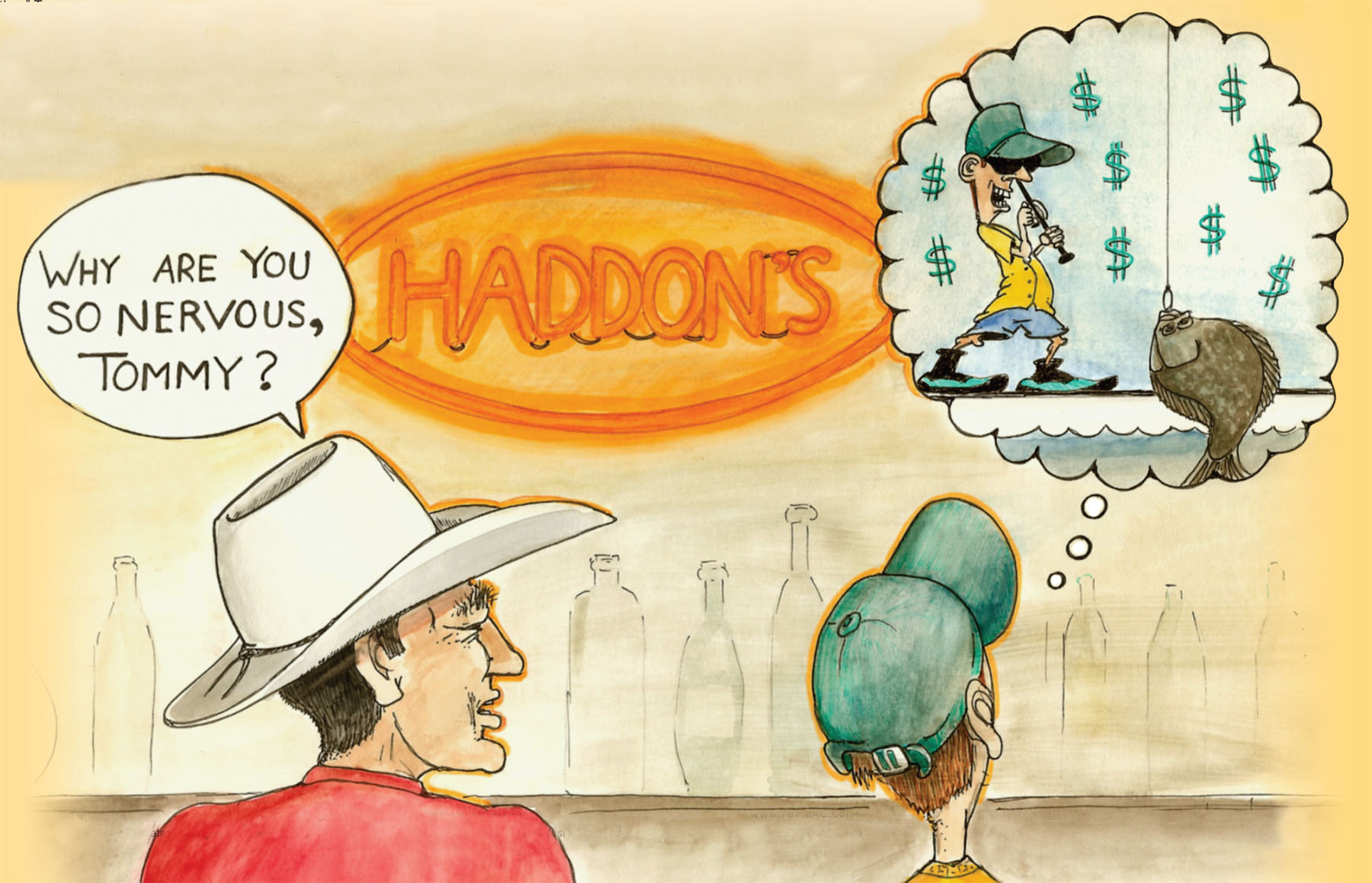 Haddon’s was having a flounder tournament and the whole town was buzzing about it. No, the Haddon’s Cup wasn’t on the line for this tourney, the grand prize was every penny that the bar took in on the Friday night of the tournament and that promised to be quite a chunk of change.

Tommy Meyers was excited. Catching flounder took no skill at all and it was as simple as catching some live finger mullet and fishing them on the bottom near the cuts that water and bait flow out of with a moving tide. Tommy knew exactly where to go to catch a tournament-winning flounder.

Near the old abandoned Army base is a cut that runs back into what is known as The Army Hole. Tommy knew that flounder moved in and out of this cut and he planned on testing his theory two days before the start of the tournament.

“Where have you been Tommy?” Bodie asked.

“Oh just doing this and that Bodie, I’ve been just really busy with the yard and stuff,” Tommy said.

“Well pull up a stool, have a beer and set a spell.” Bodie urged.

Tommy sat down and Eloisa set a cold beer in front of him.

“I thought you might be out scouting for flounder,” Bodie quipped to his buddy with a grin.

Tommy spewed beer and immediately started choking and gagging and Bodie slapped him on the back until Tommy caught his breath.

“Why are you so nervous Tommy?” Bodie asked.

Tommy had left the boat sling early that morning and after cast netting some nice finger mullet he had made his
way to a small drain that fed into the backwaters of Espiritu Santo Bay. He had timed the tides just right and with the moon on the rise he anchored at the mouth of the drain and set two rods out, one on the port and one on the starboard side of his boat baited with the finger mullet. Tommy watched as the line of one of the rods started moving slowly to the right and picking the rod up counted to five and then set the hook.

The drag responded immediately as the fish took line and made a run away from the cut. Heart pounding, Tommy fought the fish and was disappointed to see a slightly undersized redfish break the surface as he brought the fish to the boat. He released the red and was reaching for a fresh finger mullet when the port side rod tip began to quiver.

Tommy grabbed the rod just as a fish headed south with the bait. He did the “mandatory” five count and then set the hook as the fish signaled it’s displeasure by running off 20 yards of line.

“Another redfish,” Tommy said out loud.

But then the fish came to the top of the water as Tommy worked it towards the boat. It wasn’t a redfish. Redfish aren’t fl at and they’re not brown either.

“Well Mr. Connor has been keeping me pretty busy at the ranch and I figured you’d be out trying to pattern some flat fish cause that’s surely what I’d be doing if I had the time,” Bodie said to his friend.

“Well I’d never think to do that Bodie, I mean we’re partners and all and I figure we need to be doing our scouting together,” Tommy said.

“Truth be known Tommy, I don’t know if I’m going to be able to get off to fish the flounder tournament since we’re moving cattle,” said Bodie.

Tommy saw the flounder and knew it was bigger than most any he’d ever caught. He set the hook again just to be sure that the fish wasn’t going to get off and he played it up to the boat. Sliding the net under the big flounder Tommy managed to get the flounder into the boat. Laughing and snickering Tommy applied the Boga Grip and lifted it up. The Boga scale said 8 ½ pounds and Tommy knew that if the tournament was going on at that moment he would win it.

Tommy put the big fi sh into his cooler and giggled again as he marveled at the size of the flatty and then an idea struck him as he noticed that the fish was still very much alive.

Dumping the mullet out of his bait bucket and filling it with fresh bay water, he took his homemade ice (empty Clorox bottles filled with water and frozen) out of the cooler and started filling it up with saltwater. He put the big flounder in the cooler and dropped the air stone from a battery-powered aerator in and turned it on. Millions of bubbles started rising from the stone and Tommy was satisfied that the fish would be okay until he got it to his “secret” spot.

“You’re not going to fish the tournament Bodie,” Tommy asked while sounding relieved.

“Doesn’t look like I’ll be able to make this one Tommy what with everything that’s going on this weekend,” Bodie said.

“Oh, that’s a shame Bodie, I mean you know us being partners and all I got a feeling we would win that tournament hands down!” Tommy said with a smile.

Tommy ran his boat the long way back towards town and stopped at a short slough where he knew there were several abandoned crab traps still in good condition. He had found the traps while cast netting for bait one morning and kept that information a secret so he could snatch them during the annual Crab Trap Clean Up that happens every year. He could make a quick run out, pick up the traps and be back in no time just to be able to say that he had done his part for the sake of conservation.

He pulled one of the traps from the shallow water, tossed it in the boat and headed towards his secret spot. Many people knew about Tommy’s private sanctuary but he still considered it to be a secret spot and the unique thing about it was that boats seldom ran through the immediate area. People didn’t fish there much because there were never any fish there to catch.

Tommy looked around to make sure that no one was watching him, and satisfied that no one was about, he tied a small red trotline buoy to the end of a length of nylon rope and tied that to the pilfered crab trap. He had to make some adjustments to the trap to keep crabs from getting in and the flounder from getting out. Then he pulled the big flounder from his makeshift live well. Sliding the flounder into the trap, Tommy wired the door shut then tossed it over-board and watched it sink. The only clue that it was there was the small red trotline buoy that bobbed on the surface.

“Well I’m heading to the house Tommy Boy; early morning coming up and a lot of work to do in a short period of time,” said Bodie.

“Night Bodie and I’ll see you tomorrow; this place is going to be jumping the night of the tournament.” Tommy said.