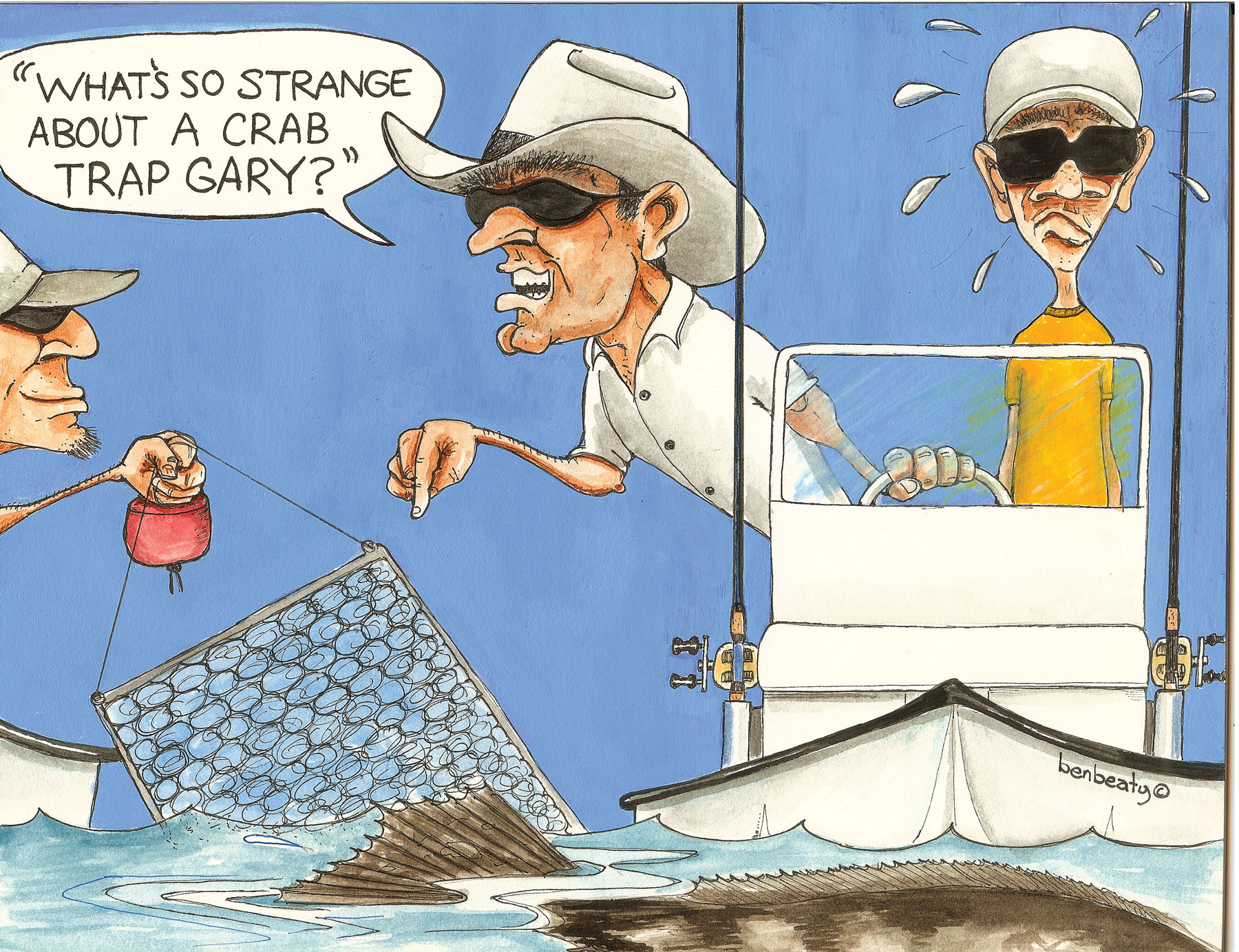 Early the next morning Tommy fired his boat up and ran to his "secret" spot. He panicked for a moment when he couldn't see the red buoy that marked his trophy but then saw it bobbing in the waves. Tommy pulled the trap and the flounder was flapping and flopping around and Tommy breathed a sigh of relief. The fish must have been eating well because it didn't look like it had lost any of its girth. Satisfied that all was well, Tommy dropped the trap back into the water and headed to the house.

Haddon's was jumping all right. The place was full and the parking lot and both sides of the street in front of the place had cars and trucks lined up as far as you could see. Old Red Childers who had retired from being a fishing guide was charging folks a buck each to give them a ride to the front door in his golf cart and it looked like he would clear a couple hundred bucks or more for the night. Old Red knew too that he'd make more than that if he waited around for the patrons to want to go back to their vehicles but he really didn't want to stay up that late if he didn't have to, and besides those meddling Deputy Sheriffs would be around by then and make him get his golf cart off the street.

The customers at the bar were two deep ordering beers and every table in the place was full. The pool tables were all busy and, in spite of it being a little chilly outside due to the norther that had blown in, the patio was crowded as well. Tommy was seeing dollar signs everywhere he looked.

Tommy looked around for Bodie but didn't see him so he waited in line at the bar to get a beer. About the time that it was his turn to order, Tommy saw Bodie walk in so he ordered two.

"Bodie can you believe all the people that are here can you, huh, can you?" Tommy stammered. "Why there's more people here than there is for the Haddon's Cup Tournament, can you believe that?"

Bodie gave Tommy a sort of disgusted look and said, "Well of course there are more people here for this tournament, Tommy, it's the Crab Trap Clean Up weekend. Old man Haddon is holding the tournament now to try and get more people involved in the Clean Up and to sort of reward people for their time and troublebut you knew that Tommy," Bodie said.

Tommy looked like he was going to be sick and the last time Bodie saw his friend look that way he had just eaten some whipped goose liver.

"I forgot, I seriously forgot they were holding the cleanup this weekend Bodie, I thought it was next weekend. Oh my Lord, I plum forgot," Tommy cried.

"Settle down boy, no need to get all upset over that, I'll be off tomorrow after all so you and me, Tommy Boy, we'll see about catching us a big old flounder and we'll pick up our share of traps too; that make you feel better?" Bodie asked.

Tommy wanted to throw up.

Tommy didn't know what to do. It was too messy outside to try and make a run for his trapped flounder tonight by himself in the dark and Tommy didn't really like being out in the dark anyway. If Bodie expected him to be with him in the tournament tomorrow there would be no way that he would get a chance to pick up his winning fish. All he could do was wait until after the tournament, head out, turn the fish loose and just go about his business.

The next morning the weather was as nasty as it had been the night before; cold, windy and miserable. Bodie said that he thought they should just fish where they would be protected and pick up traps when they saw them. Bodie didn't want to cross a lot of open water in this weather and that was perfectly okay with Tommy. Tommy liked rough water about as much as he did being on the water at night.

"What is wrong with you Tommy?" Bodie asked. "You've hardly said a thing since last night and this morning you not only look a little green around the gills but you're down right surly!"

Tommy just looked ahead at the cut they were running through and said, "Oh, it's nothing Bodie, I was just hoping for some better weather is all."

"There's nothing we can do about the weather, so let's just try to have a good time." Bodie said.

Bodie and Tommy anchored next to a slough with a strong current running and some bait milling about. They fished for a while and made note of some crab traps they would pick up when they were through fishing. No fish were found so they started the outboard, pulled anchor, and idled around pulling traps.

"What say we see if there are any traps in your "secret" spot Tommy," Bodie asked.

"Uh, there ain't none Bodie. I was there not long ago, not a trap in sight, no sir, not a one of them." Tommy muttered.

"Well, let's have us a look anyway since we're so close and besides, being out of the wind there might get a little fishing in to boot," said Bodie.

"See Bodie, I told you, not a trap in sight, no sir, not one, not one trap here so you ready to go now?" Tommy asked.

Bodie looked around and sure enough there were no crab trap floats to see but he did notice some bait milling around some grass so he thought they should fish a little while they were there. Just as he was about to tell Tommy what he was thinking Bodie saw a boat that belonged to Gary Messer, one of those Houston boys, heading towards them loaded down with traps.

"Bodie ya'll ain't going to find any traps in here today, we checked it first thing and only found one and it's the strangest thing you ever did see," Gary offered in greeting.

"What's so strange about a crab trap, Gary?" Bodie wanted to know.

"This trap had a red trotline buoy attached and had the biggest flounder you ever saw inside. It was rigged so that no crabs or anything but little fish could get in or out of it," Gary replied. "If I didn't know better I'd think someone had planted a ringer in that trap so they could win the tournament old man Haddon is putting on," he added.

Just before Gary left Tommy choked out a question, "What did ya'll do with the big flounder that you found in the trap Gary, ya'll can't keep it? You know that would be illegal!" Tommy said.

Gary chuckled and told Tommy, "Don't worry about it Tommy, we let it go where we found the trap, right here in your "secret" spot!"

Bodie and Tommy could hear them laughing even as they were speeding away in their boat as Bodie wondered aloud, "Now who do you think would have done such a thing as to try and win this tournament by cheating, Tommy?"

Tommy pretended he didn't hear; he had already baited up and cast his line to the spot where he thought he had left the trap. Now with any luck...!

"Reel in Tommy, we've got traps to pick up and I don't want Gary Messer bringing in more than we do." Bodie said. Bodie had to tell him to reel in three times.

Bodie and Tommy didn't bring in the most traps that day nor did they place in the flounder tournament; Tommy couldn't help repeating over and over to himself that cheaters never win.

"What are you muttering about Tommy?" Bodie asked. "I uh, I said, that cheating's a sin Bodie, you know that flounder in the trap and stuff."

"I know what you mean Tommy Boy and I can tell you that if I ever found out someone was cheating in a tournament that I was fishing in and I could sure lay my big hands on that fella. Let's just say it wouldn't be a pretty sight, not by a long shot," Bodie assured him.

Tommy didn't have much to say the rest of the night there at Haddon's Place.