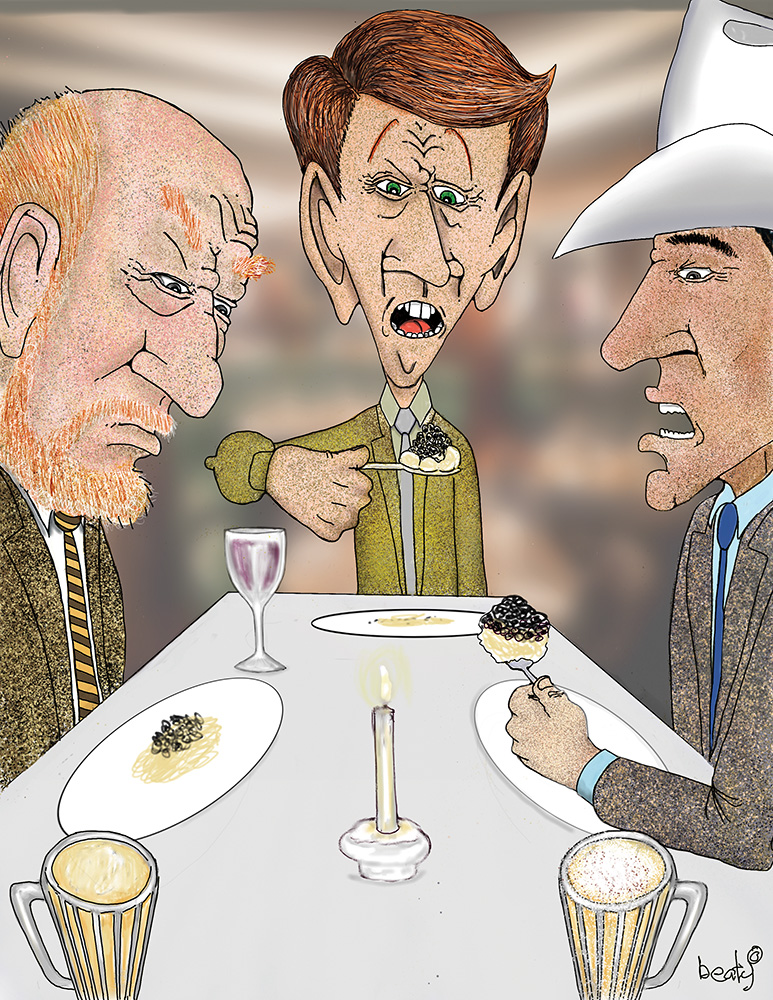 During the limo ride to the restaurant Tommy began playing with the bottles in the bar and offered to pour drinks, if anybody wanted one. The consensus was that they’d wait and have drinks when they arrived at Core. Tommy, though, decided he would like a drink of the expensive Scotch Doug had them sample earlier. Sipping his whiskey, he asked Doug, “So how come this restaurant only has two Michelins?”

“Well Tommy, I guess that’s all that they have been honored with thus far,” Doug informed him.

“Must be awkward just having two new tires. I hope they put them on the front and not the back,” Tommy commented.

Doug looked bewildered and was about to say something but Red interrupted him, changing the subject. “Say Doug,” he began, “We are thinking about visiting some of the famous English gun shops tomorrow.”

“Great idea, Red,” Doug answered. “There are many, for sure, but go to the big-name shops first; Purdey and Sons, Holland and Holland, and John Rigby. After that you can visit some of the smaller shops, if you want to see more.”

Thinking for a second, he added with a chuckle, “I am certain you will enjoy the showrooms. If you happen to find something you really like…all it costs is money.”

“Well, I know that I can’t afford anything from those gun builders, but I’ll have a good time looking and just let Red and Tommy spend their money,” Bodie quipped.

“I want to get me an elephant rifle,” Tommy proclaimed excitedly.

Surprised, the group all looked at Tommy sipping his Scotch and in unison asked, “Why an elephant rifle?”

“I’ve just always wanted an elephant rifle. Like the ones Capstick wrote about in all his books,” Tommy replied. “Not one of those big Nitro rifles, I want one of those .375 H&H rifles,” he smiled.

Doug chuckled at Tommy’s announcement but Bodie and Red were a bit worried – knowing that he could afford one and likely wouldn’t hesitate to buy one.

“Well Tommy, you know that makers like H&H, Purdey and Sons, and Rigby as well, will custom fit you for a rifle of your choosing and they really are works of art,” Doug advised.

“If they custom fit Tommy for a double rifle, it’s going to be so short and so light that it will kick like a mule!” Red interjected.

Everyone laughed but Tommy who glared at Red for a moment and then said, “Well, I was going to get one for you too, Red. But on second thought, if they would custom fit a rifle for you it would probably be too ugly for them to let it out of the store.”

Thankfully, before Red could come unglued on Tommy, the limousine pulled into an alcove and the driver announced they had reached their destination.

Men in fine suits met the car and opened the doors, welcoming the group to Core.

Tommy whispered to Bodie, “Where are these people from? I can’t understand a word they’re saying.”

Bodie laughed a bit and answered, “Tommy, their English is a bit different from ours, but that’s what they’re speaking.”

The group was shown to their table and Doug spoke to a sommelier and ordered wine for his guests.

“Doug, please don’t order for me, I’m not much on drinking wine,” Bodie informed his friend.

“Me either,” Red agreed. “Just never could make myself like the stuff.”

“Well, I like wine, so I’ll drink it with you, Doug,” Tommy chimed in.

Bodie asked if Bulleit Bourbon might be available, and he and Red each ordered a glass on the rocks.

As they waited for their drinks, a waiter came to the table and started going over the courses for the evening.

Since Bodie and Red didn’t understand a word themselves, they looked at Doug for direction.

“He said that their five-course meal for the day consists of potato and roe, Morecambe bay shrimps, Swiss chard, brown butter, Scottish venison, smoked chestnut, pearl barley, whiskey, lemon verbena and fig roles,” Doug explained. “How does that sound to you boys?”

“Well I know what shrimp are, and I know what venison is – so let’s go for it.” Bodie answered for the group.

Tommy excused himself to go to the restroom and along the way he stopped a woman in a chef’s outfit and asked her where they kept the two Michelins they’d won.

“Oh,” she exclaimed with pride. “We now have three Michelin stars! You will see them displayed on the wall in the hallway there to your left.”

“Thank you, ma’m. I want to check the tread on those Stars to see if they’re different from our Michelins back in the USA,” Tommy explained walking away.

“Some lady told me those Michelins were hanging on a wall back by the toilets, but I didn’t see any tires back there,” Tommy informed the group when he got back to the table.

Doug wanted to explain but thought better of it after seeing Bodie shaking his head, “No.”

The wine and drinks arrived, and the boys talked about what gun shop they wanted to visit first. Tommy wanted to know where to get a fishing license and Red wanted to know if the Westley Richards gun shop was close to Holland & Holland.

“Westley Richards is in Birmingham, Red. About a two-hour drive northwest of London,” Doug said. “Just tell the driver and he’ll take you there and you will see some beautiful countryside along the way.”

“And Red wants some authentic fish and chips,” Tommy spoke up. “Where would we find that?”

“Just tell the driver what you want boys, and he’ll take you to the best places. You will like the fish and chips, I promise. And please remember, the driver works for you. He will not only take you where you wish to go but he can also answer most questions about the area,” Doug assured the group.

Doug ordered another round of drinks for the table, along with another bottle of wine as conversation centered around the events of the day ahead and the excitement pleased him. He leaned over and told Bodie not to forget the card that he had given him and that he should use it for any and all expenses.

“So, Doug. If I see a rifle or shotgun that I want at one of these high-dollar gun shops…I should use the card?” Bodie whispered.

Doug’s eyes widened, and he tried to speak but choked on the wine he was swallowing. Tommy slapped him on the back, a little too hard, the way Bodie always did him. When Doug recovered he saw Bodie grinning from ear to ear and he knew that he’d been had.

“That’s what Bodie does to me whenever I choke. It works, too. Don’t it?” Tommy beamed.

“Why yes, yes it does, Tommy,” Doug agreed, still chuckling at Bodie’s humor.

“Doug, do you think we can we have some of that famous English black pudding for dessert tonight?” Tommy asked.

Surprised, Doug said, “They don’t have it here but most of the fish and chip shops have it, so you can get some with lunch.”

“That will work. I’ll try me some tomorrow,” Tommy answered. “By the way, I’ve been meaning to ask, if I buy me one of those elephant rifles, can I take it home with me on your jet?”

“Unless you buy a used rifle or one from finished stock, I think the waiting period on a custom build might require a year or longer,” Doug replied. “But, if you buy one that is already built they might be able to accommodate you with a partial fitting. It would then be shipped to their Dallas shop and you could pick it up there. You would need to enquire about all the particulars during your visit.”

A chef appeared as the first course was about to be served and a bunch of people started carrying food to the table and placing it in front of the boys.

The chef said, “Your potato and roe gentlemen.”

Tommy looked at his plate and whispered to Bodie, “Our taters have flowers and stuff in it and it sort of smells like fish.”

“Just watch Doug and see what he does. I’m not sure what to do with it either,” Bodie whispered back.

Picking up on the boy’s confusion, Doug spoke, “They’re not real flowers, they are food. Just pretend it’s a baked potato like you get at home.”

“OK, Doug, but these little round balls sure look like salmon eggs to me. Am I supposed to eat these, too,” Tommy asked very timidly.

“That’s what roe is, Tommy. Fish eggs, but these are not from salmon. This is trout and herring roe – try it, you might like the flavor.”