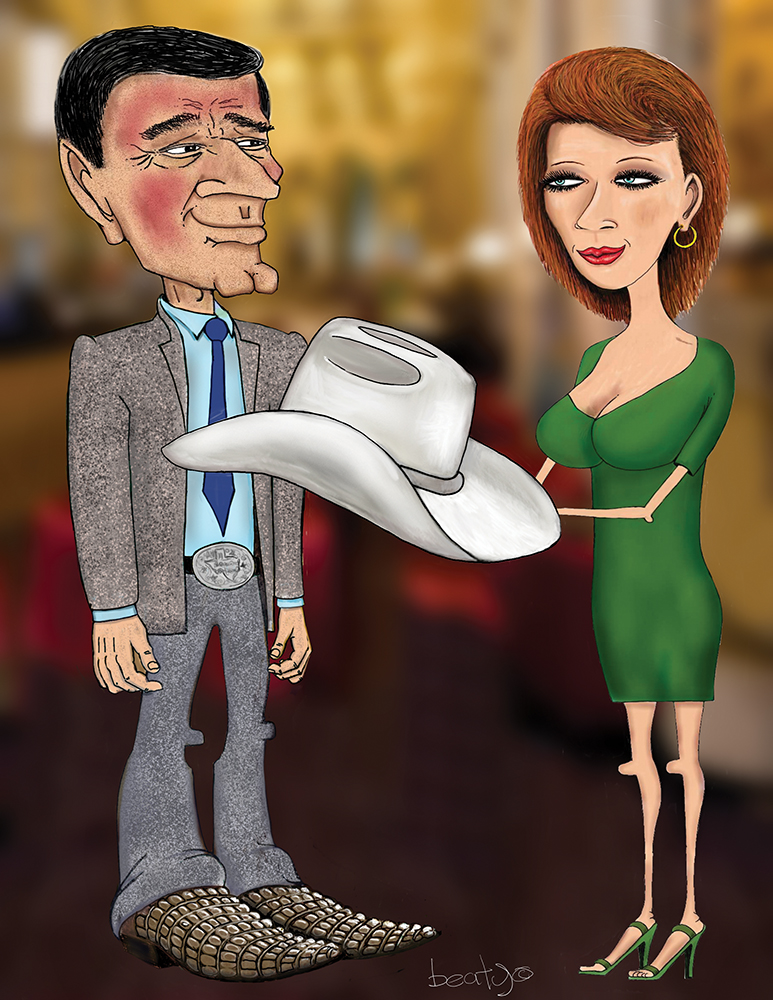 Tommy looked across the table at Bodie. “I’m not eating fish eggs in my ‘tator,” he said, trying to scrape away the roe with his fork. “Ugh! It STILL tastes like fish, Bodie!”

Red and Bodie exchanged glances as Doug realized the boys were not going to eat the dish. Calling to the waiter, he asked that he bring three plain baked potatoes and told the boys not to worry about it. “It’s definitely an acquired taste, boys. The waiter will bring you a plain potato instead.”

Tommy was gulping wine, swishing it around in his mouth, trying to get rid of the taste.

Tommy shoved his empty glass toward Doug for a refill. “Man, that stuff sticks with you like burnt roux in gumbo!”

Doug chuckled at that. Bodie and Red began laughing as well, and then Tommy joined in.

The chef arrived with the shrimp, chard and venison about the time their potatoes without roe arrived. Doug watched as each of them signaled approval at the first taste and he began to relax.

“Now this stuff is good!” Tommy said. “I’d like to shoot me one of these Scottish deer. It’s tender and tastes good!”

Red chimed in, “Maybe Doug will fly you to Scotland and you can shoot one with that new elephant rifle you’re talking about buying tomorrow.”

As soon as he said it he regretted it and the glare Bodie gave him almost caused him to lose his appetite. Well, almost.

“Can I do that, Doug?” Tommy asked excitedly. “Man, that would be something, to shoot a Scottish deer with an elephant rifle. Can we do it if I buy one tomorrow?” he pleaded.

Doug looked to Bodie for some help and Bodie said, “I think that Doug is doing plenty for us, what with inviting us on this trip, Tommy. And besides, you’d probably have to wear a kilt to hunt in Scotland.”

“A kilt? You mean one of those dresses that men wear over there?”

“Well, that just ain’t going to happen, so scratch Scotland off our list, Doug,” Tommy assured him.

Doug chuckled some more, Red rolled his eyes, and Bodie let out a sigh.

The crew finished their meal and desert with Tommy telling everyone repeatedly that while he didn’t care for the figs, the Scottish venison was the best he’d ever eaten.

“Would you boys care to join me for a nightcap when we get back to the hotel?” Doug asked.

All three answered in the affirmative as they got back into the car.

“Hey Doug, can we go get a drink at that sky pod bar place?” Tommy asked.

Everyone looked at Tommy as Doug answered, “Why, of course, Tommy. It’s a beautiful place with a spectacular view of the city. I go there often.”

Doug told the driver to take them to the Sky Garden as Red quizzed Tommy, “So how do you know about this bar, Tommy?”

“I saw it advertised in a magazine and it looks like a neat place to go, and besides, they have a red drink I want to try,”

Red replied with his customary eye roll. Bodie looked at Doug and winked, and the group settled in for the ride to Sky Garden.

The driver let the men out of the car and Doug spoke to a doorman who led them to an elevator that took them to the thirty-fifth floor. They were met by the bar manager who shook hands with Doug and exchanged pleasantries.

“Man, this place sure is way up there,” Bodie commented as he removed his hat.

A very pretty young lady approached and asked Bodie if she could take his hat. Bodie looked at Doug who nodded and Bodie handed the girl his hat. “That’s a new one that I haven’t had a chance to get dirty, so be gentle with it,” Bodie smiled to the girl.

Returning his smile, she asked, “Begging your pardon, sir. But are you a real cowboy?”

“He sure is. He rides horses and ropes cows and has a ranch that is miles wide. Maybe bigger than London!” Tommy blurted.

Bodie looked again at the girl and politely said, “Yes ma’m. I’m a cowboy and I work for a man who owns a very large ranch. I doubt it’s as large as London, though.”

“I think you have an admirer,” Doug whispered to Bodie as they were seated at a table beside a floor to ceiling window.

“She’s sure a pretty filly at that,” Bodie whispered back, just as he and the young lady made eye contact again.

Getting seated, Red ribbed Bodie, saying, “Maybe you should invite her to visit the gun shops with us, she seems to like you.”

Bodie grinned back at Red while Tommy admired the night view of London through the tall window. “Hey guys, I bet you can see Scotland from up here!” Tommy commented, jerking his thumb toward the window.

Doug ordered Scotch on the rocks, Bodie ordered bourbon, and Red decided on gin and tonic. Tommy informed the waiter he wanted whatever that red drink was that he saw in the magazine ad.

The waiter thought for a moment and said, “Let me ask the bartender if he knows what that might have been. I’ll be right back.”

“Tommy, you could just have something normal, maybe a Scotch like Doug is doing,” Bodie said.

Before Tommy could reply, the waiter returned to say the red drink was probably their signature watermelon margarita.

That’s it. That’s what I want!” Tommy replied gleefully.

When their drinks arrived Tommy said, “See, I told y’all that it was a pretty red.”

The others asked in unison, “Well, how does it taste?”

Tommy took a sip and smacked his lips, “Delicious!” Turning quickly, he advised the group he’d be right back.

“Where ya going now?” Red asked.

“To ask the bartender if they import their watermelons from Texas.”

Doug, Bodie and Red just looked puzzled at each other and Red said, “Well, it is a pretty drink, and it does smell like watermelon.”

With Doug, Red and Bodie all engaged in conversation, Tommy found the pretty young lady that had taken Bodie’s hat and told her that Bodie liked her. He then asked if she might want to give him her phone number so that he could give it to Bodie. She smiled and blushed a bit, and then scrawled the number on a cocktail napkin. Handing it to Tommy, she glanced toward Bodie who was looking on, wondering why Tommy was speaking with her. Surprised that Bodie was watching, she gave him a quick wave and smiled approvingly.

Of course, Bodie had to quiz Tommy what was going on.

“Her name is Pamela. Here’s her phone number and she will be expecting your call,” Tommy announced, proud of himself.

Bodie had bourbon coming out of his nose, Red was choking on gin, and Doug was having a giggling fit.

“Tommy, I don’t need a matchmaker and especially not here in England,” Bodie chided his friend; trying to sound more irritated than he actually was.

“Oh, you should definitely ask her out, Bodie.” Red chortled.

“I must say that I have to agree with these other gents, Bodie. She’s a real looker and she seems more than a tad interested in you,” Doug added.

After more than a few rounds, Bodie said he’d had enough for the night and everyone agreed.

“We need to get to bed so we can have an early breakfast before we go gun shopping,” Tommy announced with excitement.

Doug paid the tab and the group walked toward the door.

“I have taken extra care with your hat, sir,” Pamela said smiling at Bodie, handing him his hat.

“Pamela, I don’t think the two of you have been properly introduced,” Doug said. This is Bodie Allen from Texas.”

“Pleased to meet you, Miss, uhm, I mean Pamela,” Bodie stammered. Holding her hand just a bit too long.

“We’re going elephant gun shopping in the morning if you want to go with us. And we’re gonna have fish-n-chips and black pudding for lunch!” Tommy told Pamela rather glibly.

“Well sir, while I certainly appreciate the invitation, I’m afraid that I have previous plans for tomorrow. But I have no plans for the evening,” she answered. Looking directly at Bodie.

“You turned redder than a Case tractor!” Red laughed as they were getting into the car.

“I did no such thing,” Bodie shot back.

“Oh yes you did, too. Redder’n a beet!” Doug and Tommy agreed.

“Keep it up and see where it gets you,” Bodie replied, but with a slight grin.

Everyone was tired from their evening of gourmet food and good liquor and headed straight to their suites upon arriving at the hotel.

Bodie sat on the side of bed, staring at the napkin with Pamela’s phone number. “Nah, there’s nowhere for this to go. What with her living in England and me in Texas,” he muttered.

He was about to turn in when the telephone on the nightstand rang. Thinking it was Red, Tommy or Doug with more ribbing about Pamela, he picked up the phone and said, “I told you that you were gonna regret it!”

Pausing momentarily, a voice came on the line, “Mr. Allen, this is Pamela, we met this evening…”

Caught totally off guard, Bodie managed to stammer an apology, “I, I am very sorry, Pamela. I thought you were one of my friends playing a joke.”

“Oh, I see,” She replied. “No sir, I decided to give you a ring and ask if you might like to have dinner tomorrow evening…since I do not have to work.”

Bodie was stunned and all he could say was, “I would like that a lot, Miss, uh, Pamela.”

“I think that would be fine, Pamela, and I’ll be looking forward to it.”