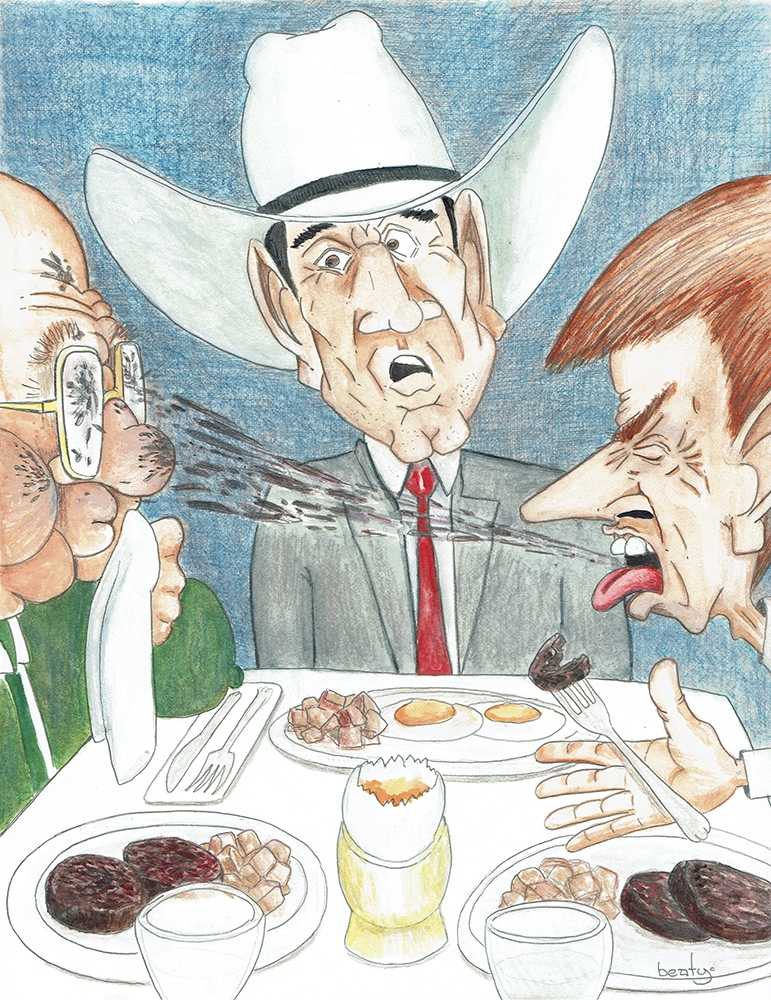 Entering the breakfast dining room, Bodie noticed Tommy at a table and joined him. Tommy was peering at an egg on a small stand and holding an instrument in his right hand.

“I ordered toast and coffee and the guy brought me this.”

“Not sure. All I know is it’s an egg on a stand and I have no clue what to do with this thing either,” handing the instrument to Bodie.

Bodie called to a waiter and explained that neither he nor Tommy knew what to do with the egg or the tool.

“Oh, forgive me, sir. It’s a soft-boiled egg.” the waiter advised, taking the tool from Bodie. “You simply place the cutter over the egg like so, pull the handle to snip off the top, and enjoy the egg inside.”

Tommy and Bodie were impressed how easily and neatly the waiter had opened the egg, but Tommy was still not sure how to eat it.

“Well that’s a pretty handy gadget but the egg don’t look like it’s cooked all the way,” Tommy grimaced.

“It’s soft-boiled, sir. If you’ll add some salt and pepper you should find it delicious,” the waiter added.

Tommy continued staring at the egg while Bodie ordered coffee, scrambled eggs and sausage with a side of toast.

“So, you going to eat that thing or just stare at it all morning?” Bodie asked.

Tommy shot Bodie a sour look and dipped his fork to get a taste.

“Hey this is pretty good, Bodie. But it’s a strange way to eat an egg,” Tommy admitted.

Red joined the boys and ordered coffee and toast.

“Not much of a breakfast for a guy your size,” Tommy managed between bites.

“After all the rich food last night,” Red growled, “I’m not ready for a big breakfast. And what is that you’re playing with…an egg erector set?”

“It’s a soft poached egg; but I wouldn’t expect you to know anything about that,” Tommy sassed.

Bodie chuckled at the banter and urged Red to order something more substantial as they had a busy morning ahead.

“Well maybe I’ll just try me some of that black pudding Tommy’s always raving about. That should tide me over ‘til lunch.”

The waiter overheard Red mention black pudding and, stepping to the table, informed him that the restaurant in fact offered it for breakfast.

“Hmmm,” Red grumbled. “Somebody told us you didn’t serve it here, but I’ll give it a shot.”

“Hey there, Mr. Waiter,” Tommy called. “Bring me some of that black pudding too, please.”

Bodie observed that other diners had begun taking notice of them – their Texas accents, clothes, and manners were attracting attention and he whispered to Tommy to keep it down.

Tommy blushed. “Sorry Bodie, I got excited thinking about that pudding.”

The waiter came back with Bodie and Red’s orders and black pudding for Red and Tommy.

“What in the name of all things Holy is this?” Red asked the waiter, pointing at the black pudding with his fork.

“It’s your black pudding, sir,” the waiter replied as he turned to leave.

“Now I’m no world traveler or anything close, but that sure doesn’t look like any pudding I’ve ever seen,” Bodie announced to his companions.

Tommy lifted his plate and took a sniff. “Ooo-whee,” he exclaimed. “This stuff stinks!”

“Red, you might want to try just dipping your fork and see if tastes any better than it looks,” Bodie suggested.

“By the smell of it I wouldn’t taste it if you held a gun to my head!” Red snorted.

Summoning the waiter, Red asked what the black pudding was made of.

“It’s a blend of onions, pork fat, oatmeal, seasonings, and pig blood. And ours is the most delicious in London,” the waiter declared matter-of-factly.

Red fixed his gaze on the pudding again and exclaimed, “Oh, Good Lord!”

Curiosity got the best of Bodie and he suggested, “Tommy Boy, you taste it. You’ve been crowing about the stuff since we left Texas.”

Tommy made a horrible face and spit the black pudding from his mouth and it splattered in Red’s face. Red screamed in horror as the foul-smelling concoction landed on his beard and shirt, some in his mouth.

Red began gagging convulsively and grabbed his napkin. Tommy tried to kill the taste with a big swig of coffee, that a waiter had just refilled, but only succeeded in burning his mouth, causing him to scream in pain.

Red bolted from his chair and went straight for Tommy. Tommy jumped up and it became a cat and mouse chase, trying his best to keep a table where guests were seated between himself and Red. Round and round; Red gagging and spitting, Tommy screaming his tongue was burning.

Bodie couldn’t help, as much as he wanted to, unable to catch his breath from laughing so hard since Tommy spewed the black pudding in Red’s face. Red was gagging and drooling all down his shirt and cursing like a sailor. Tommy running for his life and screaming while holding his tongue. Guests nearby began to panic.

A manager and two waiters were able to separate Tommy and Red, leading them to the lobby. Another waiter joined the fray to help contain Red, who had almost broken the grasp of the two holding him.

Bodie finally was able to force himself to get up from the table and collar both Red and Tommy. With as stern a voice as he could muster under the circumstances, he told the two to knock it off and go to their rooms and clean up. “Take different elevators. AND DON’T make me have to come up there!”

Bodie apologized to the irate manager, waiters, and frightened guests as he paid the tabs and left a more than generous tip. Thinking over what had just happened he sunk into an oversize lobby chair and began uncontrollable laughter again until tears streamed down his face.

Tommy made it back to the lobby first and pushed a chair over to sit next to Bodie.

“Getting a might close aren’t you buddy?” Bodie asked.

“I don’t want Red getting me when he comes down,” Tommy squeaked.

“So, tell me, Tommy, did it really taste that bad?” Bodie asked.

“It was horrible. It tasted worse than a boiled hardhead catfish. I know, ‘cause I tired that once.”

Bodie burst out laughing again as the elevator door opened and Red entered the lobby.

“I don’t know why you’re sitting next to Bodie, you little freak of nature. He ain’t going to be able to save you!” Red shouted.

“Okay, you two, that’s enough. I told you to knock it off and I meant it,” Bodie snapped. “Let’s just pass this off as a bad morning caused by bad decisions and let’s go to a gun shop.”

Tommy and even Red sort of perked up and their moods improved at Bodie’s mentioned of a gun shop.

They got into the car and asked the driver to take them to Holland and Holland when Red said, “I had to shower to get that smell off me and I used an entire bottle of mouthwash trying to get rid of the that horrible taste.”

Tommy looked meekly at Red and said, “Me too, Red. Wasn’t that black pudding horrible?”

“I don’t think I ever tasted the pudding. It was your spit and breath and the thought of it coming from your mouth that made me sick,” Red replied.

Bodie stared out the window and tried not to laugh aloud until the driver announced they had arrived at their destination.

Getting Tommy and Red together, Bodie warned, “I want the both of you to be on your best behavior in here. Hell, for all we know these folks might know Doug and we wouldn’t want y’alls rude behavior embarrassing him.”

A man dressed smartly in suit and tie answered the door.

“Would the gentlemen be interested in a custom fitting and build, or prefer to view our stock of used rifles?”

“I want one that I can take home with me,” Tommy blurted again.

“Unfortunately, sir, we have no used firearms at this location. However, our Dallas, Texas shop keeps such an inventory and I will be happy to show you the online photos.”

Tommy, Bodie and Red looked at each other and exclaimed in unison, “Dallas?”

“But, sir, we came all the way over here from Texas to look at rifles,” Tommy replied dejectedly. “Now we can’t look at any?”

“Oh, no sir, we have new display rifles available for you to view, but nothing used or ready for delivery today. Would you have a preference?”

“Very well, sir. I can show two models of express rifles that we currently build to order. This is our Royal Double Rifle and we have a pre-owned one in the caliber you desire in Dallas,” the salesman said as he broke the rifle open and handed it to Tommy.

Tommy closed the rifle and held it up, aiming at a stuffed animal on the wall. “Yup, this is what I want. Can I see a picture of the one in Dallas?”

“Tommy Boy, you might want to find out the price of that rifle before you go any farther with this,” Bodie whispered in Tommy’s ear.

“Here it is sir,” the salesman said pointing to a large computer monitor. “Our Royal Express Rifle chambered in .375 Holland and Holland. Priced attractively at only eighty-thousand dollars.”

Tommy started choking, and Red, too. Bodie was so flabbergasted that he nearly forgot to slap either on the back to restore their breathing.