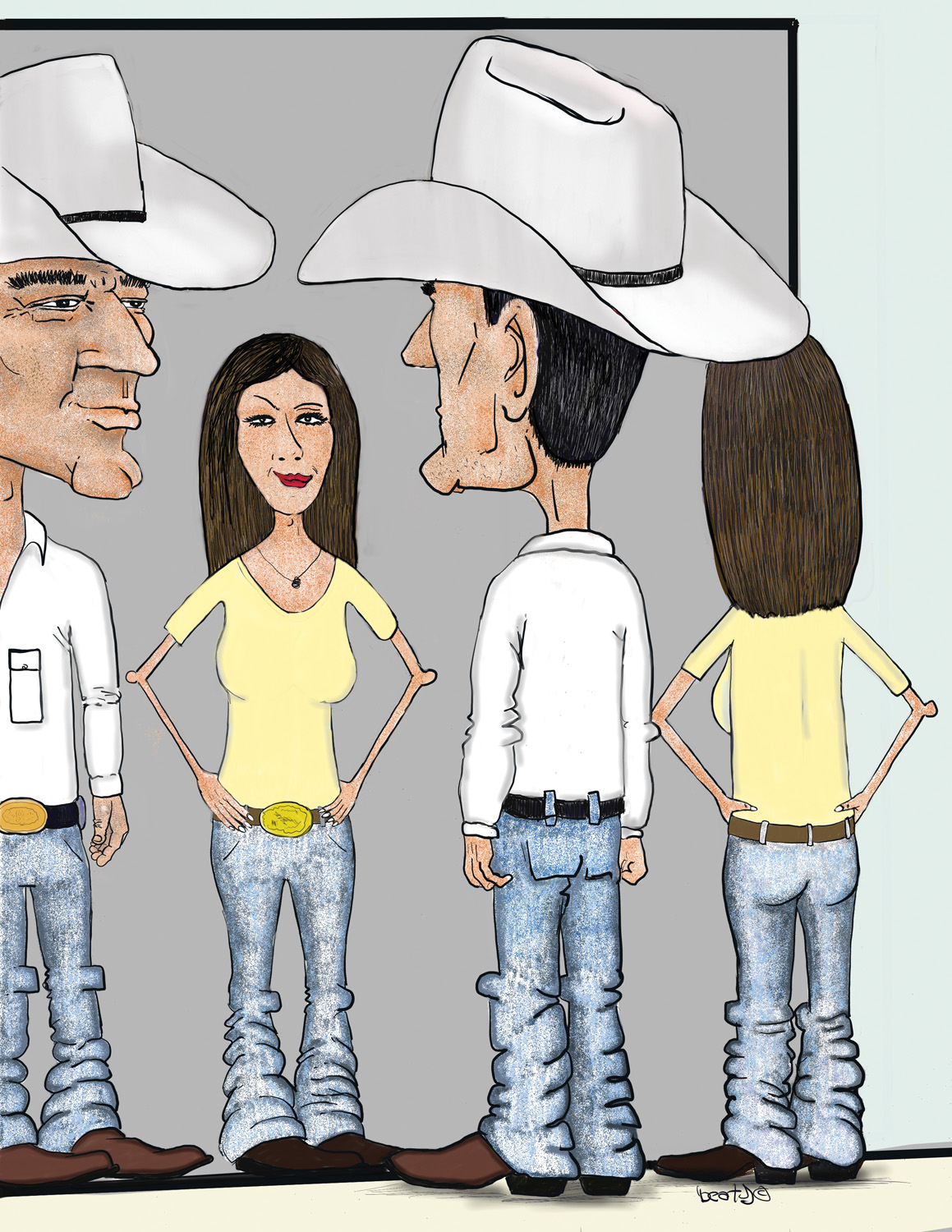 Tommy concluded his business with the Dillard’s clerk and pulled out his phone. “Hey, Bodie, where ya at right now?”

“About thirty feet behind you,” Bodie’s voice boomed clear as a bell in his ears as well as the phone.

Tommy turned and giggled sheepishly. “So, where we headed to now, Bodie?”

“Well, Tommy, I need a new hat and I’d like to check out some boots. What say we head across town to the western store? Oh, and I found a few shirts and some jeans, so I guess a hat and boots are in order, too.”

Walking into the western shop, Tommy commented that he always liked the smell of new leather goods.

“Maybe you should come out and help me work cattle sometime, Tommy. A good saddle smells just like this,” Bodie chuckled.

“Ugh, no thanks,” Tommy replied. “Dust and cow poop and mean horses – No Way!”

Bodie laughed and walked toward a rack of hats as a very pretty young lady in western clothes approached and asked if she might be able to help.

“Are you a real cowgirl?” Tommy asked.

Bodie shot him “the look” and Tommy pretended to be suddenly interested in something on the next aisle.

“Well, I run barrels and my dad has lots of cattle. So, maybe I am,” the girl replied sweetly.

Tommy blushed and pointed at Bodie. “Yeah, well he’s a real cowboy. And he fishes, too!”

Bodie flushed a bit at that, and cleared his throat. “Hello, Miss. I’m interested in a new felt hat, if you don’t mind.”

“Yes sir, we have lots of hats. Do you already have something in mind, a brand and style you normally wear?”

Bodie said most of his hats were pretty worn and that it’d been a long time since he bought a new one, but he liked silver belly Stetsons and Resistols.

“Good choices,” the girl remarked cheerfully. “And we have a good selection of each. So, lemme guess…you need a 7-3/8s?”

The girl quickly returned with a pair of hats. “This is the Resistol Challenger and this one is the Stetson Lariat. Both are 5x silver belly.”

Bodie took the hats from her and stepped in front of the full-length mirror. He liked the fit and shape of both. Minor shaping, he thought to himself, and either would be perfect.

“I like both of them,” Bodie answered. “Is there a price difference, Miss?”

Bodie flinched. “Well,” he stammered again, “That’s a good deal more than I was hoping to spend, but it’s certainly been a while since I bought a new hat and it’s for a special occasion.”

“They both look really nice on you,” the girl offered. “I think they both accent your strong, handsome face.”

Tommy had never seen Bodie so obviously flustered so quickly and began giggling again. Bodie shot him “the look” but with a quick wink.

“I’d like to change the shape just a little, if it’s not too much trouble,” Bodie said, admiring the Stetson in the mirror.

“Oh sure, I can do that for you, right over here, if you’ll tell me what you want done,” the little cowgirl chirped. Knowing she had him hooked.

“I’d prefer to do it myself,” Bodie informed her politely. “If it’s okay with you and the steamer is hot.”

“Oh sure. Follow me and you can have at it.”

Bodie used the steam to bend the brim to his liking and went back to the mirror to make sure. “That’s what it’s supposed to look like,” he affirmed.

“Well then,” Bodie replied. “I like George’s music and I’m glad he likes the shape of my hat.”

Tommy asked the girl a question about a cavalry hat and then asked, “What is your name, Miss, so we don’t have to keep calling you, Miss.”

“Oh, I’m sorry. My name is Charlisa,” she replied as she and Bodie made brief eye contact. “My dad’s name is Charlie and my mother is Lisa.”

Bodie told Charlisa he would like to look at some dress boots and she asked him if he had a particular brand in mind.

“I’ve always liked Noconas and Tony Lamas, if you have them.”

Charlisa said they carried both and led Bodie to the boot section. Bodie looked for Tommy and was horrified to see him straddling a bench wearing the cavalry hat, pretending to shoot at something while riding the bench. Before Bodie could get his attention a male sales associate approached Tommy. Bodie grinned and turned back to Charlisa and the boots.

“Any particular color or style you’re looking for?” she asked.

Charlisa told Bodie to have a seat and she’d be back shortly with a selection for him to try. Bodie was secretly hoping he’d worn socks with no holes. Looking around for Tommy, he noticed the male sales associate leading Tommy toward him, wearing the cavalry hat, making Bodie wonder what story he was about to hear.

Tommy took a seat next to Bodie. “Did you get some boots?”

“Not yet. She’s in the back gathering up some for me to try on.”

“Did you buy that cavalry hat?”

“Not yet, but I might. It would make a good fishing hat and I’m pretty sure it would irritate Red. That alone would make it worth the price,” Tommy grinned.

Charlisa came out with both arms full of boxes and stacked them on the floor in front of Bodie.

“Now, sir, please don’t get all flustered when I show you this first pair. I think they are the most beautiful boots I have ever seen,” Charlisa said, opening a Tony Lama box.

Bodie had removed his work boots and agreed the Tony Lamas were sure enough fine looking.

“Is that alligator?” Tommy asked.

“No, sir. These are Nile crocodile” Charlisa replied.

“Why do they call them Miles crocodile?” Tommy asked.

“Not Miles, sir, Nile. As in the Nile river of Egypt,” she politely corrected.

“Pfft,” Tommy retorted. “There’s no Nile River in Egypt. The Colorado is close but there ain’t no Nile River anywhere near there.”

“She’s talking about the country of Egypt, not the little town up near Wharton,” Bodie fired back with a glare.

“Oh, well okay, ‘cause there sure ain’t no Nile River anywhere near Egypt, Texas,” Tommy replied, very sure of his geography.

Bodie rolled his eyes and Charlisa laughed while Bodie tried the boots on.

“I swear, these are the most comfortable boots that I have ever had on my feet,” Bodie allowed.

Tommy looked at Charlisa and asked, “Whatta y’all ask for a pair of boots like that?”

“Well, being Nile crocodile and all, these are $1650, but they’re the last pair we have and they’re just your size,” she smiled.

Tommy went to choking and Bodie whacked him on the back. Feeling dizzy at the price, Bodie retook his seat and very carefully removed the boots and handed them back to her.

“Young lady, I might pay that for a horse or a used pickup,” Bodie informed her. “But I would never, ever, pay that much for a pair of boots. Maybe you have a nice pair of calfskin or cowhide for a couple hundred dollars?”

Bodie settled for a nice pair of cowhide Noconas with a half-moon toe for $214.00 that Tommy agreed would go with anything – jeans, slacks, a suit, or wading shorts.

Bodie and Tommy headed to the register with Charlisa as Bodie remarked again how comfortable those boots were and how he wished he could take that Resistol hat for a spare. But wasn’t about to go broke getting outfitted for a trip to England.

While Bodie settled up for his hat and boots, Tommy said he wanted to look at the cavalry hat one more time and walked over to the guy he had been speaking with. He told the man that he wanted the cavalry hat and he pointed to the Resistol box that Bodie didn’t take and said he wanted that too. He also walked the guy over to the boots and told him he wanted the Miles Crocodiles as well. The man corrected him but Tommy let it pass. He informed the man to hold everything in his name and he’d be back in the morning when they opened.

The salesman was quite happy about the matter until Tommy told him to give Charlisa credit for selling the Resistol and the crocodile boots. He could have sales credit for the cavalry hat.