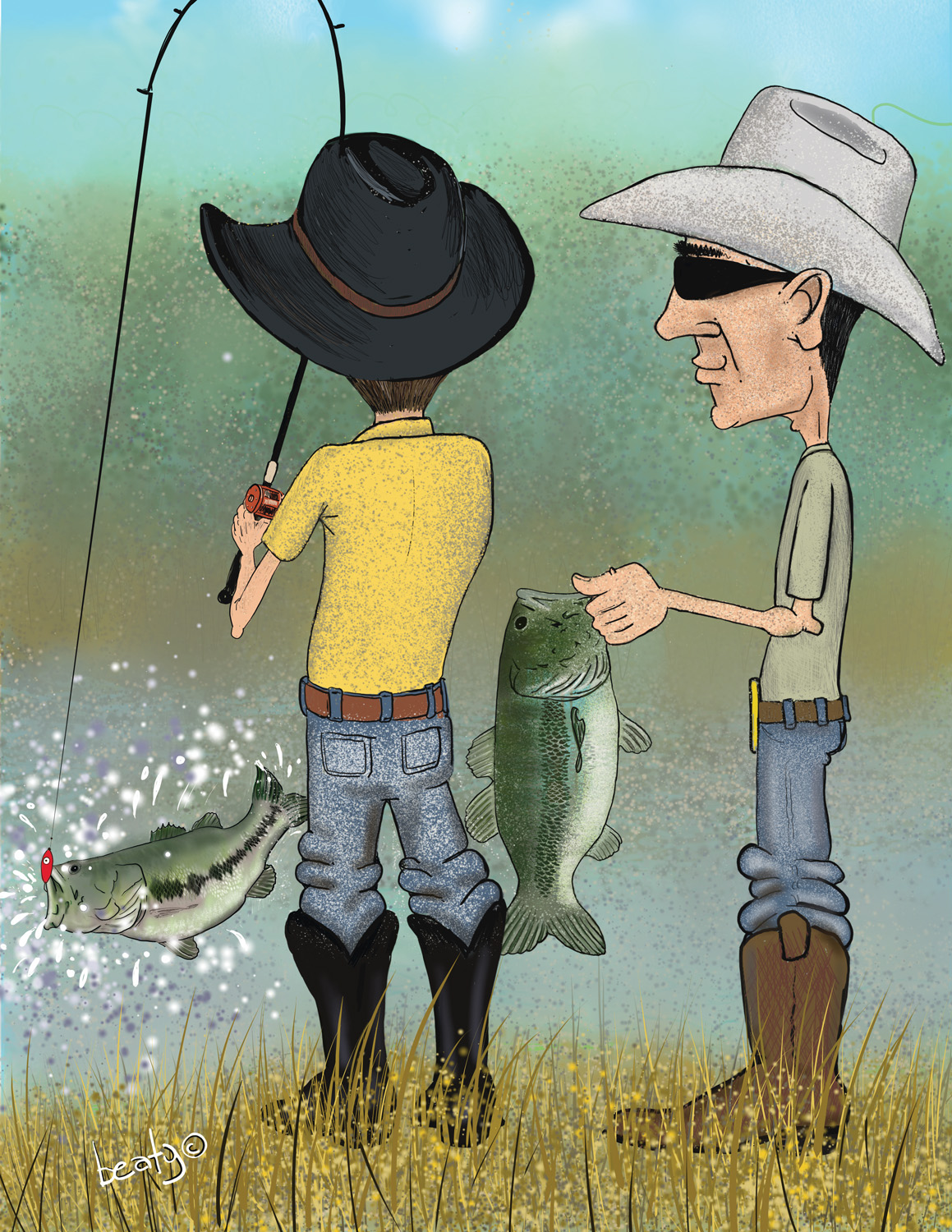 Bodie and Tommy left the western wear store and were heading home when Tommy asked Bodie if he wanted to grab some supper at Haddon’s Place.

“I was just thinking the same thing, Tommy Boy. I’m feeling about as empty as my wallet.”

“Aw heck, Bodie, a man has to dress his part. You got some nice clothes, a new hat and a nice pair of boots that will last you a good while…it’s all good,” Tommy replied with a smile.

“Well, you know me, Tommy. I even complain about the prices when I’m at the grocery store.”

Eloisa came to the table where Bodie and Tommy sat, delivering two cold draft beers. “So, did y’all two buy up the stores today?” she asked.

“Sure did,” Bodie smiled to her. “I’m thinking I’m going to be on a hamburger diet until I can pay off my credit card bill.”

“We didn’t really spend all that much, Eloisa. But Bodie did try on a pair of sixteen-hunnerd-dollar boots!” Tommy chortled.

“Tried them on is all I did, and I wouldn’t have done that if I had known the price beforehand,” Bodie added.

“You guys need to learn about online shopping and stay out of those western boutique places. You’d like the prices,” Eloisa chided in jest.

“Oh, and by the way,” she continued, “We made a really big pot of chili if you guys are interested…and plenty of jalapeño corn bread to go with it.”

“Me, too, if it’s not too hot. I can’t take it if it’s too hot…wakes me up at night and gives me bad dreams,” Tommy lamented.

Bodie and Eloisa rolled their eyes as she headed for the kitchen.

“Well it does, Bodie. And you know it does,” Tommy whimpered.

“I know what does?” Bodie asked after a big swig of suds.

“That chili. If it’s too spicy it keeps me up and gives me bad dreams.”

“I know, you’ve told that many times. We just like picking on you,” Bodie assured him.

Eloisa brought the chili along with a big plate of cornbread, grated cheese, chopped onions and sliced jalapeños. Bodie spooned some peppers and onions into his bowl and topped it with cheese. Tommy added onions and cheese to his bowl, but no peppers.

Red walked in and dragged up a chair as Eloisa called from the bar if he wanted chili.

“Oh, Hell No!” Red shouted back. “You know that stuff tears me up if it’s too spicy. But I will have one of your magnificent chicken fried steaks, my dear.”

“You really know how to talk to the ladies, Red,” Eloisa beamed at the compliment.

“It does it to me too, Red,” Tommy said excitedly, glad that somebody agreed with him.

“What does what to you, Tommy?” Red asked.

“Spicy chili gives me problems. Gives me bad dreams,” Tommy said. “I remember one really bad dream, you were wearing a dress and sitting on the swing in my backyard, singing Over the Rainbow. Now, tell me that’s not a bad dream!”

Red glared and instantly turned crimson. Bodie chimed in before he could say anything.

“Look you two, I’m trying to enjoy my supper. No more talk about old redhaired men wearing dresses and sitting in swings. And, you can’t kill him in here, Red. Not while I’m eating, anyway!”

Tommy stared into his bowl a few minutes while Red’s color faded to normal.

“So, when are you leaving for England?” Red asked.

“Doug helped me with my passport and we leave next Friday,” Bodie replied, reaching for another chunk of cornbread.

“Well, Bodie, seems to me we should get some fishing in between now and then,” Red announced.

“You’re reading my mind, Red. I’m planning on doing just that, soon as I can line out a few things at the ranch tomorrow. You two care to join me toward evening?”

“So, Bodie, has your passport arrived?” Tommy asked.

“Not yet but Doug says it should be here pretty quick.”

Bright and early, Tommy headed to town to pick up his purchases at Dillard’s and the western place. Man, Bodie sure is going to be surprised when he finds these clothes, hat and those boots on the plane, Tommy thought proudly to himself.

Bodie and Monroe had gotten an early start as well and were horseback, riding a fence line on the far side of the ranch. “We need to get a dozer in here and clean up this fence line Monroe,” Bodie said to his foreman. “Have Pete and Horacio load it up and they can drop it back at the road and get started at the cattle guard.”

“How wide do you want the cut along the fence?” Monroe asked.

“Well, this is a long fence, Monroe. Let’s just do a blade’s width or they’ll be out here for a week,” Bodie advised. “Oh, and have them bulldoze that old deer blind back into the brush. I swear I thought we got rid of that old stand ten years ago.”

“We did get rid of that stand ten years ago, Bodie. That’s the one we replaced it with.” Monroe laughed. Bodie laughed as well and commented that he really should get down to this part of the section more often.

By noon the two had completed their ride and were back at the truck and horse trailer. Bodie and Monroe unsaddled the horses, wiped them down and put them into the trailer for the hour drive back to headquarters.

“So, Bodie, what are you going to bring me from England?” Monroe asked as they bounced along the rough road.

“I was thinking one of those English hats like you see in the movies, to replace that worn out old cowboy hat of yours.” Bodie said with a grin.

“Bowler, they’re called bowlers, Bodie. And I’ll pass, but thank you just the same,” Monroe smirked to his boss.

“Yeah, good point, Monroe. You’d probably get bowled over if you wore a bowler into Haddon’s. Maybe I’ll just bring you some tea – to see if you can brew up something better than that stuff you call coffee,” Bodie jabbed. “I’ll need to figure out something to bring Mr. Connor, Red, and Tommy, too.”

Changing the subject; Bodie informed Monroe that he’d packed some sandwiches, and maybe they could swing by Mr. Connor’s bass lake, have a quick lunch and see what’s biting.

“Sounds good to me, and it’s sure better than the beans and tamales that I’ve been eating for three days,” Monroe replied.

“Well, that’s what you get for telling Horacio you were hungry for beans and tamales. That boy doesn’t know how to cook anything unless it’s enough to feed three people for a week.”

Finishing lunch, Bodie was already working a weedless-rigged worm along a line of old stumps.

“You planning to do any fishing when you’re in England?” Monroe asked.

“Heck, Monroe, I can get all the fishing I want right here in Texas. And besides, I want to spend my time seeing the country and find out what they’re grazing their cattle on,” Bodie said, setting the hook on a nice bass.

“Probably grazing them on fish and chips, and that figgy pudding we hear so much about,” Monroe answered, reeling in a bass of his own.