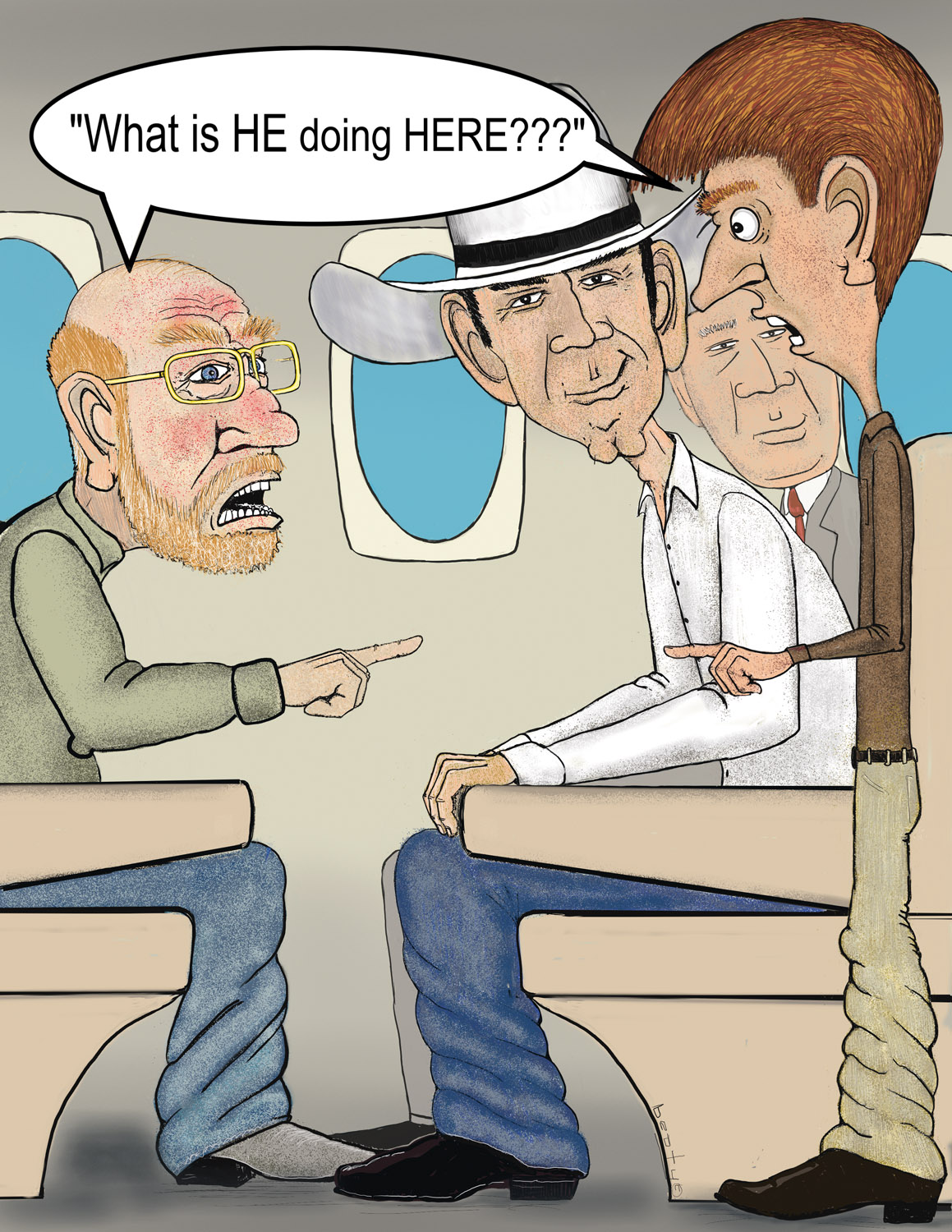 Tommy had all of his stuff and the things he had bought for Bodie packed and was trying to think of anything that he might have forgotten. “I got folding money, my two-piece rod and reel and some lures, plenty of Red Man and other necessary stuff,” he mumbled aloud to himself as he took a final look around the room. Satisfied that he hadn’t missed anything, he began the task of stacking everything at the back door.

Doug had informed Tommy they would be taking off at 7:30 in the morning, and in order to surprise Bodie, he should be there by at least 6:00 to board the plane. Tommy had arranged for Skinny Johnson to pick him up at 5:00, just to be safe. Having Skinny drop him off seemed a good plan, to avoid Bodie seeing his truck in the parking area and ruining the surprise.

Bodie was pacing the kitchen floor and drinking way too much coffee for as late as it was, but his nerves were shot. “I should never have accepted Doug’s offer to go on this trip.” Bodie thought. “I spent fishing and hunting money on clothes and sundries and, well, who am I kidding? I’m going to stand out like a three-legged calf at a roping over there in England.”

Bodie had his bags packed and was suddenly a little ashamed at their worn appearance. Thinking aloud, he said, “I should have bought a nice suitcase and one of those wardrobe things, I guess.” But the fact of the matter was that the worn leather King Ranch duffle and carry-on bags that he had won in a fishing contest years ago would just have to do.

Bodie carried his luggage out and put it in his truck, then went back inside to go over his list for the umpteenth time. Picking up the worn list from the kitchen counter, he noticed his passport lying beside it and tucked it carefully into the inside pocket of his vest. “Hard enough to keep up with a billfold and all this other stuff, much less a passport,” he grumbled. “Heck with it,” he announced loudly, though he was alone. “I’m going to Haddon’s for a beer and try to relax a bit.”

There weren’t many vehicles in the parking lot at Haddon’s when Bodie pulled up. He recognized a few trucks and Red’s souped-up golf cart and he was glad there wasn’t a big crowd. Red was at the bar and Bodie took a stool next to him.

Eloisa drew a cold beer into a frosty mug and placed it in front of him. “Will you be having dinner?” she asked.

“Man, my nerves are so shot that I hadn’t even thought of supper,” he replied.

Red laughed and said louder than necessary that Bodie should stop hanging out with Tommy so much because he was starting to act like him. Bodie shot him a look but broke into a grin and laughed along.

“Red, I sure hope I never get that bad!” Bodie retorted, lifting his mug toward Red for a toast.

Eloisa, Red and others in the place all laughed at that and Bodie ordered a chicken fried steak with mashed potatoes and gravy and a salad to go with it.

“As nervous as I am about this trip, Red, I can’t believe that I’m eating anything at all,” Bodie allowed, wiping suds from his lip.

Bodie let that sink in a few seconds and then offered, “Red, you wouldn’t go even if you had the chance.”

“The Hell you say. I’d be packed and ready within the hour.” Red bellowed.

Bodie stared at Red for a moment and then excused himself to get something out of his truck.

Bodie called Douglas Sellers on his cell phone. “Bodie, how are you? All packed and ready to go, I hope?”

“I sure am Doug. I might be a tad bit nervous, but I’m definitely up for the adventure. But, say Doug; I really hate to ask since you have already been so generous. But, uh, do you think it might be possible to invite a friend along on this trip. Might help settle my nerves a bit, having a friend with me. But the expenses and all, I just really hate asking.”

Doug caught himself before nearly blurting that he already had a friend going on the trip, so he paused and asked instead who Bodie might have in mind.

This is a good thing Doug thought quickly to himself, having just learned that his business meetings would require much more time than he originally planned. Having another friend along would be perfect to keep Bodie entertained around London.

“Bodie, that is a splendid idea. Please do invite the good Captain to go with us. There is plenty of room on the plane and, please do not even give a second thought to the added expense.”

“Well heck, Doug, that’s mighty kind. But, I don’t know if he has a passport or even if he wants to go, but he was popping off a minute ago about how he’d be packed and ready in an hour if he had a chance to go to England.”

“Please do ask him to go, Bodie, and I hope to see both of you tomorrow morning at the airport.”

Bodie got back inside just as a very pretty lady was setting his food down on the bar. “Who on earth was that?” Bodie said excitedly.

“Friend of Eloisa’s who’s staying with her and needed a job,” Red answered.

Just as Eloisa came by to refill their mugs, Bodie dropped the bomb. “Uh, say Red, I just got off of the phone with Doug Sellers and he would like for you to go to England with us, all expenses paid and everything. Maybe you were just flapping your jaws earlier but this is the real deal and a once in a lifetime chance. Whattaya say?”

“I’m out of here,” Red exclaimed, draining his mug “I’ll be packed in an hour and I’ll just come to your house and stay the night. We can ride to the airport together!”

“Wait, Red, don’t you need to call the wife and get permission? And do you have a valid passport?” Bodie stammered.

“Got it all covered, Bodie. Nancy’s on a ten-day Alaskan cruise with the girls and is going to stay with the oldest daughter another ten days when they get back to California,” Red assured him. “And my passport is always up to date.”

Red plucked a ten from his wallet and dropped it on the bar, nearly knocking two tables over as he turned and bolted for the door.

“So Bodie, umm, what’s Tommy going to think when he finds out that Red went to England with you and Mr. Sellers and he wasn’t invited?” Eloisa quizzed.

Bodie frowned, stroking his chin. “To be honest, Eloisa, I never asked him because I didn’t think he would go. I swear.”

The flight attendant on Doug Sellers private jet told Tommy to hide in the galley until about twenty minutes after they got airborne, and then he could surprise his friend when she took breakfast out. So, Tommy sat in the galley bothering the nice lady, eating everything she would give him, while slurping some really good tasting coffee.

Bodie and Red arrived on time and were welcomed aboard by the attendant and the pilots. Doug Sellers arrived a few minutes later and Red thanked him profusely as they took their seats. The co-pilot announced they were cleared for take-off and would be departing momentarily.

The fasten seatbelt light flashed in the galley and the flight attendant took a seat next to Tommy, informing him to buckle up as they were about to depart. Tommy had just put a fresh chew of Red Man in his jaw and started choking as the plane began rolling down the tarmac. The attendant slapped him on the back and he recovered just as the engines went to full throttle.

Gaining cruising altitude, the seatbelt lights were turned off and pilot announced they were free to move about the cabin. The galley attendant, whose name Tommy found out was Pamela, said that she was about to serve breakfast and that he should get ready to surprise his friend.

She placed the food and beverages on a serving cart, opened the door and started into the main cabin, Tommy in tow.

Tommy and Red saw each other at the same time and Bodie noticed Red’s face suddenly flush and his mouth drop open.

“What is HE doing HERE?” they blurted in unison.