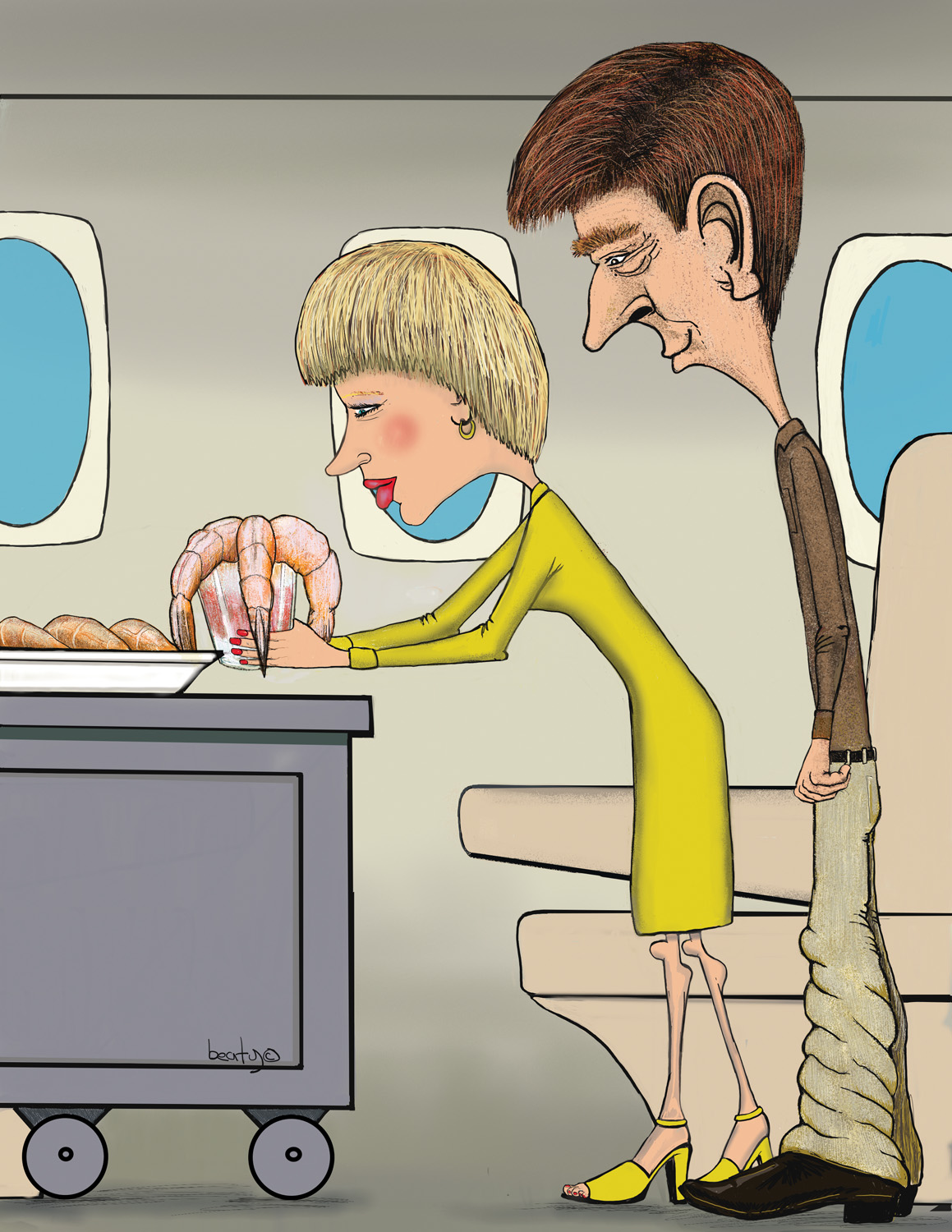 Bodie bolted upright at the sound of Tommy’s voice and whacked his head on the ceiling panel. The impact knocked him back into his seat but undaunted, he stood again more carefully, staring agape at his friend.

Flabbergasted, Bodie looked at Doug, his jaw still on his chest. Doug quickly said, “Tommy wanted to surprise you and keep you company in England. Of course, this was before you invited Red to come along.”

“Turn this airplane around or give me a parachute because I need to get off,” Red stated gruffly.

Bodie chimed in, “Okay, everyone just calm down and stop scaring the lovely lady here, whom I believe was about to serve us some breakfast.”

Quickly gathering his thoughts, Bodie then said, “It’s a nice surprise Tommy, and you sure got me. I also think that it was most generous of our host to have me and my two best friends accompany him on this trip to England…don’t you both agree?”

Along with the announcement, Bodie gave Tommy and Red “the look.” And with that they both settled into their seats like scolded school children as an icy stillness came over the group.

Doug spoke first. “Boys, boys, we are going to be on this plane together for a good while and we should be celebrating, not arguing. So, let’s have a nice breakfast, a Bloody Mary or two, and settle down to enjoy the flight.”

Breakfast was huevos rancheros with a great sauce, smoked ham, refried beans, fried potatoes and some of the best corn tortillas the boys had eaten in quite some time. The Bloody Mary was spicy and delicious. Tommy asked Pamela for another Bloody Mary and Red asked for a glass of milk.

“Why on earth do you want to drink milk when everybody’s having Bloody Marys?” Tommy asked, very puzzled.

“Maybe you shouldn’t fly if it upsets your stomach,” Tommy shot back, completely missing Red’s sarcasm.

“Flying’s not what upsets my stomach, you ignor----!” Red stopped mid-sentence as he felt the toe of Bodie’s boot digging into his shin.

Pamela returned with a Bloody Mary for Tommy and milk for Red. Doug and Bodie both took refills of coffee and struck up a conversation of England. Doug began filling them in on things to do, what to visit and areas of interest, and such.

“I will have dinner commitments the first two evenings of our stay but after that I will be able to join you all and I have some favorite restaurants I want you to experience. And, of course, there’s Holland & Holland and James Purdy & Sons, both very famous gunmakers in London, as well as paying a visit to Birmingham to see the Westley Richards gun factory,” Doug informed the group. “It’s a couple of hours from London proper but it would be a nice drive and a good way to spend a day.”

“I have a feeling that anything any of those gun stores have for sale is going to be more than I can afford,” Bodie chuckled.

“Goes for me, too, but I would like to be able to say I’ve at least been there and held one of their rifles or shotguns,” Red offered.

“Not to worry,” Doug assured him. “There will be a car and a driver at your disposal twenty-four hours a day, and I do hope you will keep him busy showing you the sites.”

“Not to look a gift horse in the mouth Doug, but that goes double for me,” Red added.

Doug spoke before Bodie could say a word, “I have arranged a suite for each of you at the Savoy Hotel, overlooking the River Thames. I stay there every trip to London and believe me, you will want for nothing.”

“I stayed in a suite once at a La Quinta in San Antonio,” Tommy blurted proudly.

“Maybe so, Tommy Boy. But I do not believe it will compare with the Savoy,” Bodie grinned.

At Doug’s suggestion, the group decided to nap until lunch and soon Tommy and Red were snoring peacefully. Doug and Bodie chatted quietly about London and the trip in general.

Bodie was asking Doug dozens of questions about London, who answered each in turn when he could and, also offering detail on sites of interest and where they might want to take lunch.

“I have to be honest with you, Doug,” Bodie spoke sincerely. “I don’t want to be embarrassed after going in to eat at one of the restaurants you suggested and finding out that I can’t afford the meal.”

Doug reached for a portfolio that was lying on the table next to them and removed an envelope. “Bodie, inside this envelope is a corporate credit card with your name on it. The billing zip code is also in the envelope in case you are asked for it. I want you to use this to pay for anything that the three of you might want to eat, see or do outside of your hotel. Everything at the hotel should be charged to your suite, of course.”

“It’s not often that I’m speechless, Doug, but you sure do have me this time,” Bodie said appreciatively, accepting the envelope.

“Bodie, you saved my daughter’s life and have become a very close friend. Believe me when I say it is my entire pleasure to accommodate you, Tommy, and Red, on this trip.”

Bodie had just closed his eyes when Pamela came to inquire whether they might be ready for lunch.

“Nap or lunch, Bodie? I guess we talked longer than I had planned,” Doug smiled to his friend.

Bodie took a quick look at Red and Tommy still snoozing and said, “Nap sounds good to me.”

“And to me as well,” Doug agreed. “So, Pamela, a late lunch would be much better. Thank you.”

Bodie was going over all the things Doug had told him about London and soon drifted off to sleep. Doug did the same.

Tommy woke up hungry, got up to stretch his legs, and drifted back to the galley to see what Pamela might have to snack on. “I’m hungry enough to eat raw fish,” he announced to the lovely lady.

“Well, I did not plan for sushi, but I am going to serve shrimp cocktails and baked halibut for lunch,” Pamela replied.

“Man, I just love me some shrimp,” Tommy exclaimed. “Could you put me about a dozen of them in my cocktail, please?”

Pamela looked surprised and politely told Tommy, “Why certainly, but they are really large shrimp. Perhaps you would like to start with eight, and if you want more I can bring them to you.”

“Well, eight skate and donate those shrimp to me, Miss Pam,” Tommy giggled loudly, and returned to his seat.

Pamela didn’t know exactly what Tommy meant, but he was going to get eight of the jumbo shrimp in his cocktail.