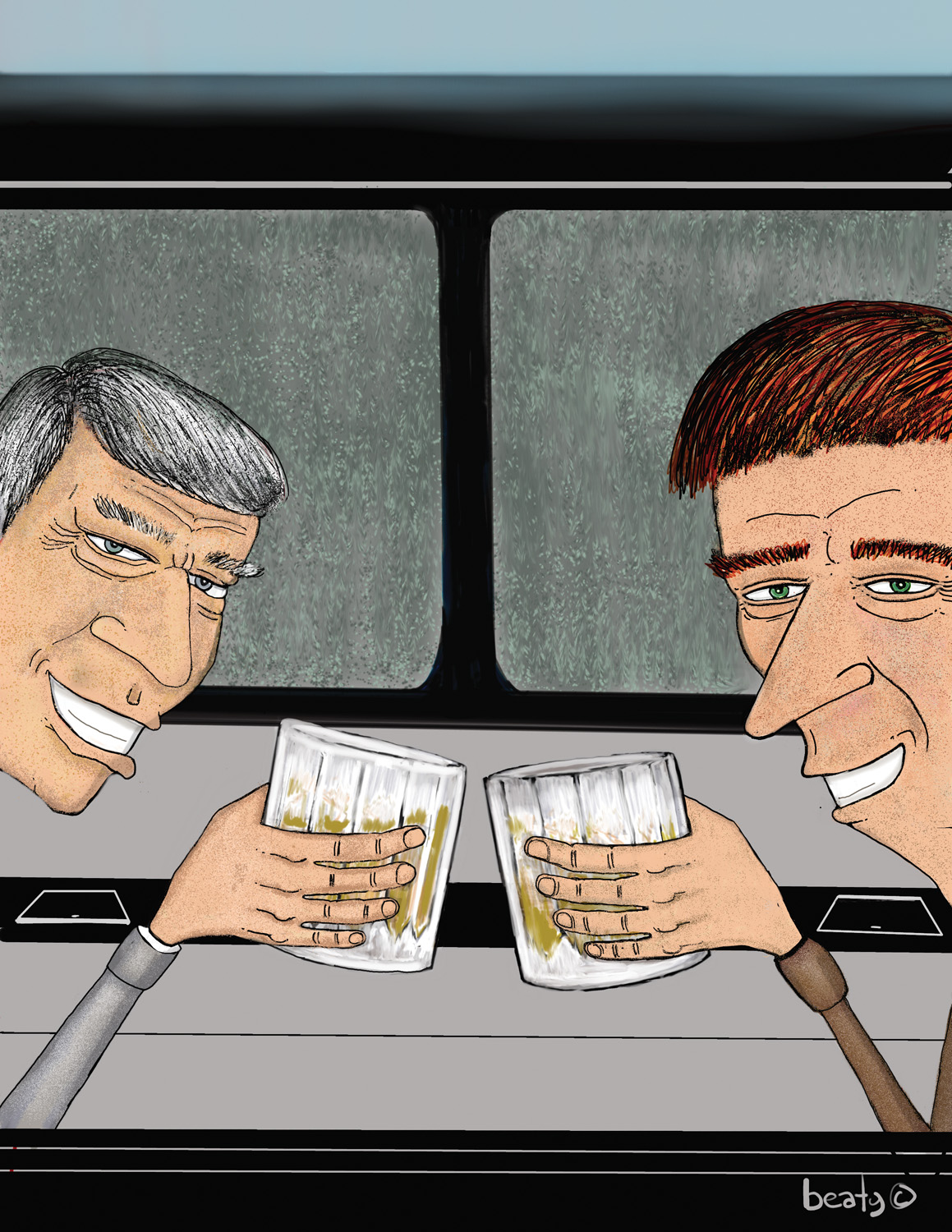 Tommy was on his tenth jumbo shrimp from a second cocktail that Pamela had served him when Red woke up and sleepily looked around.

“Where did you get that? You airplane-hijacking no-account!” he snarled.

“Pamela fixed it for me. I already ate one and am working on this one now,” Tommy smiled between bites.

Red was about to get up when Pamela appeared at the galley door and noticed he was awake. Before she could ask if he was hungry, Red pointed at the shrimp cocktail Tommy was devouring and said, “I’ll have two of those shrimp cocktails, please.”

Red got up to visit the restroom and bumped Bodie’s arm in passing. “Better get you some of these shrimp,” he said, pointing back at Tommy. “Before we wipe ‘em all out.”

Bodie reached across the aisle and tapped Doug’s arm. Doug opened his eyes and looked at Bodie who whispered, “Shrimp! Great big ones!”

Doug pressed his call button and activated the intercom. “Miss Pamela, if you’re serving shrimp cocktails, Mr. Allen and I would each like one, please.”

Stepping from the restroom, Red could see Doug and Bodie were eating their shrimp. Bodie looked up at Red and smirked, “Hey Red, shrimp, big ones! Better hurry before they’re all gone.”

Red hurried to his seat to find a shrimp cocktail waiting for him and sat down to enjoy it.

Tommy gobbled down his sixteenth shrimp and walked into the galley. “Miss Pamela, do you know how long before we land in England?”

She picked up a phone that rang in the cockpit and asked when they would be landing. “The pilot says we should be landing in about an hour.”

“Could you wrap up about a dozen of those jumbo shrimp and put them in a Ziploc bag, please?” Tommy asked.

Pamela allowed that she had plenty and that if he got hungry later the hotel should be able to accommodate him.

Tommy thought for a second and then replied, “Oh, they’re not for me. I was just thinking I might need some bait when I fish that Tame River when we land in England. But please don’t tell the others, I’m not planning to share!”

Tommy turned to go back to his seat and Pamela rolled her eyes. “Now there’s a first,” she muttered under her breath.

Gentlemen, the pilot says we will be landing in about twenty minutes and asks that we fasten our seatbelts and settle in. If anyone wants a drink now is the time to get it before Pamela locks down the galley.

The boys all asked for a beer and sat back to enjoy and await landing in England.

“Any of you guys happen to see Final Destination?” Tommy asked nervously.

Doug, Red and Bodie all turned around and looked at Tommy, and the look that Bodie gave him sent chills down his spine.

“I was JUST asking is all,” Tommy whimpered.

The pilot came on the cabin intercom and advised everyone to remain seated until he gave the all clear, and went on to say that Customs would be coming out to the plane.

“Customs is coming to the plane and we don’t have to wait in line?” Red asked.

“One of the perks of private aviation,” Doug said with a smile.

“Do they search your bags when they come to the plane?” Tommy asked nervously.

“They can, but I haven’t ever had them do that here” Doug answered.

Bodie turned and looked at Tommy. “Do you have something in your bag that might cause problems, Tommy Boy?”

“Four or five fillet knives and my .45 automatic is all I can think of,” Tommy replied.

Doug, Red and Bodie all turned and stared at Tommy with their mouths open.

“You brought a handgun to England?” Red asked loudly.

“No Tommy. That’s a very serious offense. Let me have it and I’ll instruct the pilot lock it in the cockpit safe,” Doug announced sternly.

Tommy retrieved a small bag from his backpack, took out the Colt and handed it to Doug. “I’ll just take care of this right quick,” Doug said as he made his way to the cockpit door.

The door opened and Doug handed the pistol to a wide-eyed crew member who stared at the handgun, shook his head, and then nodded yes, closing the door.

Bodie looked at Tommy and hissed, “What in the world were you thinking, bringing your pistol on the plane to England?”

“Well, they got muggers in England. I read about them and the bubbles can’t be everywhere at one time.” Tommy whined.

“Bobbies, Tommy! The English police are called bobbies,” everyone corrected in unison.

After everyone signed their custom’s forms and exited the plane, a group of attendants began placing their bags into the trunk of a large limousine. A man held the door open and Tommy shoved his way in first, then Bodie, Red and Doug.

“You in a hurry, Tommy?” Bodie asked in a stern tone.

“No, ah sorry, but I was freezing out there in that wind,” Tommy replied.

“It is a bit chilly with the wind, isn’t it?” Doug agreed.

Tommy was playing with the built-in bar and asked Doug if he could mix a drink.

“Scotch on the rocks, if you please,” Doug answered.

Tommy took a decanter labeled “Whiskey” from a slot on the bar, dropped a few ice cubes in a glass, poured a good double and handed it to Doug.

“If you see any bourbon in there you can pour me some over ice.” Red said.

Tommy found a bottle labeled bourbon behind the Scotch but grabbed the decanter of Scotch instead and poured a generous helping over a couple of ice cubes and handed it to Red. Red took a sip and made the most God-awful face any of the men had ever seen. Swallowing it and gasping, Red asked, “What in the world did you just give me to drink, you ignorant little freak of nature?”

Tommy looked back at the bottle, feigning innocence, and said, “Oh, I’m sorry Red, I gave you Scotch by mistake.”

Doug chimed in, “It really is a very nice single malt, Red. If you’ll let your taste buds adjust you might actually find that you enjoy it.”

“Doug, with all due respect, I don’t think I’ll live that long.” Red replied.

Doug and Bodie chuckled as Tommy grinned at Red, whose face was about the color of a ripe apple.

“Hand it to me, Red,” Bodie said and took the glass.

Bodie took a sip and tried not to make a face, but couldn’t help himself. Fighting back a cough, Bodie allowed that he’d have to agree with Red. “This stuff is terrible! Might make a good horse liniment though!”

Even Doug laughed at that and soon all of them were laughing until Doug said, “I can’t understand that neither of you like the Macallan.”

“Is it some kind of special Scotch?” Tommy asked.

While Bodie and Red sat with their mouths open in disbelief, Tommy took the glass from Bodie and began sipping.

“It won’t beat a cold draft beer from Haddon’s on a hot August day but it really is good Scotch,” Tommy said.

Red and Bodie stared in amazement as Doug and Tommy clinked glasses in a toast to good Whiskey.