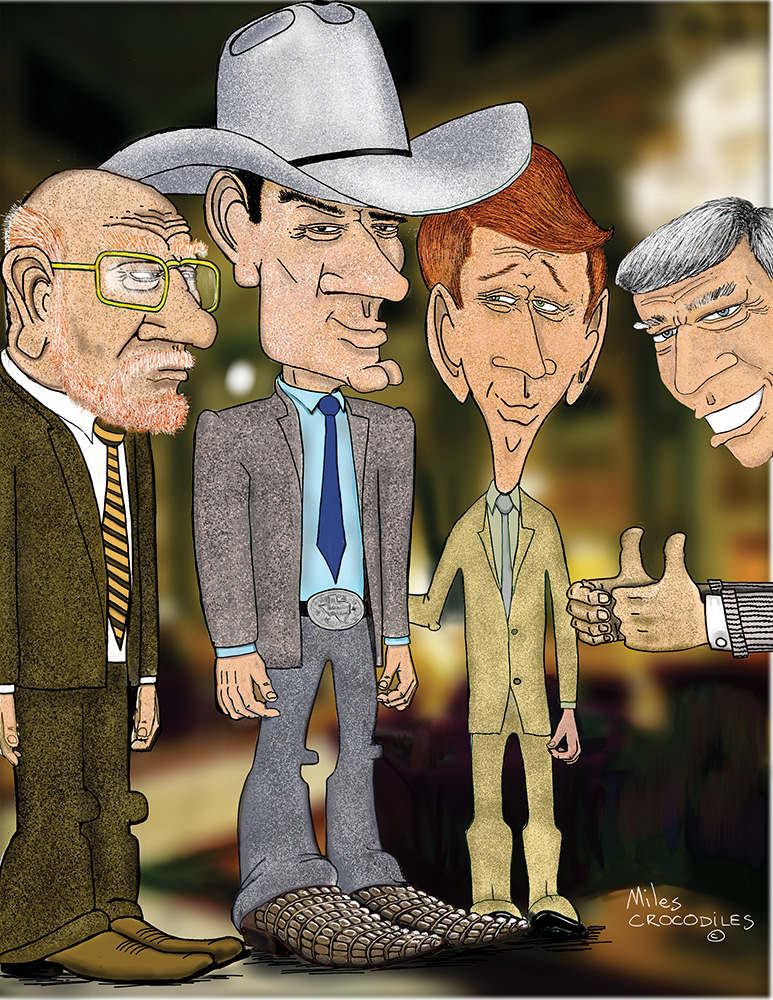 The driver let Tommy off at the front entrance to the hotel and, crossing the lobby he bumped into Bodie exiting the elevator.

“I already fished but didn’t even get a bite on my shrimp,” Tommy lamented.

Bodie chuckled and remarked that the shrimp being cooked might have had something to do with it. “Anyway,” he continued, “Go wash your shrimpy hands and meet us in the bar.”

“Bodie, are we going out somewhere tonight?” Tommy quizzed him.

“Yeah, Doug is taking us to some hoity-toity place for dinner and we thought we’d grab a beer before we get all dressed up. We’re supposed to dress for the occasion and I hope that jacket I bought for this trip will do,” Bodie responded.

Tommy headed up to his room. Giddy with the idea that he was going to surprise Bodie with the clothes, boots and hats he’d bought, all laid out on his bed. “Ol’ Bodie’s gonna be blown away when he sees those Miles crocodile boots!” he chuckled aloud.

Tommy called for a bellman and had him take all of Bodies things to his room and place them on the bed. Then he washed up and headed down to the bar.

Tommy joined Red and Bodie at their table and, noticing they both had full mugs in front of them, signaled the barmaid to bring him one as well.

“Oh, I can handle my beer alright,” Tommy assured him.

“Tommy Boy, what Red’s saying is that this stuff has a bit more kick than what we get at Haddon’s. Drink slowly just to be safe – OK?”

“Ugh…I don’t care for the flavor of this brown beer at all,” Tommy winced.

Red and Bodie agreed, which prompted Bodie to approach the bartender.

“Excuse me, sir, but do you by chance have any American beer?”

The barmaid brought three beers to the table and the trio each took a taste.

“Tastes like Miller Lite to me, but a bit fruity,” Red announced, taking another sip.

Startled, and having never heard of it, Red and Bodie both asked what the hell he was talking about.

“I had it a few times on the River Walk, in San Antone. I think Coors owns it,” Tommy answered smugly.

The barmaid happened by and Red asked if she knew the name of the beer they were drinking.

Tommy smirked. Bodie laughed. Red turned a little redder than usual. But they all laughed about it later.

“Any chance you have Dos Equis?” Bodie asked.

Now that they had a beer they all liked, Red asked where they were going for dinner.

“I don’t know the name of the place, but Doug said to dress nicely and that a car would be out front and take us there,” Bodie told him.

“I want to try some of that black pudding I hear about all the time,” Tommy told the others.

“What kind of pudding is black?” Bodie wanted to know.

“Not sure, Bodie, but it must be good because I have heard a lot about it,” Tommy responded.

“Well,” Bodie began. “We can certainly ask Doug about it. If he says its good we might as well all try it.”

Changing the subject, Red suggested, “What say we visit a few of the famous London gun shops in the morning and then get some authentic fish and chips for lunch. You know, just take our time and walk around a bit.”

Bodie liked the idea but Tommy had other plans. “I wanted to go fishing in the morning.”

Bodie interjected, “We fish all the time at home, Tommy. We’re in London…”

“I know that, but I want to catch at least one fish while I’m here,” Tommy insisted. “But I’ll have to get a fishing license first. Maybe we all get a license and check out one of those lakes Doug mentioned.”

“We might just do that, but let’s hit those famous gun places in the morning and worry about fishing later,” Bodie said. “Anyway, guys, right now we need to get up to our rooms and dress for dinner.”

“And having cold beer,” Tommy agreed.

Red went into his suite and when Bodie was about to open his door, Tommy asked, “Uh…say Bodie, can I come in for a second?”

Bodie walked through the door and into the living area and asked Tommy what was up. “I think you should go and look on your bed,” Tommy answered sheepishly.

Bodie glanced at his friend for a second but went into his bedroom and noticed the hat, boot boxes and the garment bags. “What is all this, Tommy?”

“Well, Bodie, you remember those Miles crocodile boots that you said felt better on your feet than anything, and that Resistol hat you wanted but didn’t want to spend the money for two hats?”

“And do you remember that Hart Schaffner Marx blazer, the Polo shirts, and other stuff I told you that you should get but wouldn’t spend the money?”

“Tommy, please tell me you didn’t buy all of this stuff for me.”

“Well those things and a few more, like slacks and ties and belts. You’ll need all these things. And besides, it didn’t cost that much, and I can afford it. It’s what friends do; take care of each other, like you always take care of me.”

Bodie’s mind was racing. The boots, hat and blazer, along with the rest of the stuff, probably set Tommy back three thousand or more. Bodie just wasn’t used to people doing things like this for him and it made him uncomfortable.

But, seeing Tommy beaming the way he was, and knowing that with him there were never any strings…Tommy bought the stuff because he could and because he wanted to. Bodie sighed and relented – sort of.

“Tommy, this is one of the nicest things anyone has ever done for me and I appreciate it very much. I’ll probably look right smart in these duds and I betcha I could dance all night in these boots. But – If you ever do anything like this again I’m going to be very angry.”

Tommy let out a sigh of relief just as Bodie picked up a necktie, “Now show me how to tie one of these things. It’s been a while.”

Tommy picked out a pair of slacks, and shirt and tie to match Bodie’s new blazer. Tying it around his own neck, making it longer than normal so it would look right on Bodie, he loosened the knot and slipped it over his head.

“Here you go, Bodie. Now I’ve got to hurry and get dressed myself. I’ll meet you and Red in the lobby.”

Bodie sat for a minute, looking at all the things Tommy had bought for him. “You know, for a man that could mess up a county fair…Tommy sure has a heart of gold,” he muttered aloud.

Tommy was happy that Bodie wasn’t mad at him, and proud that Bodie’s new outfit would make a great impression on Doug.

When Bodie, Red and Tommy met Doug in the lobby, Doug whistled approval and flashed two-thumbs up.

“You men look like you dress like this every day,” Doug said admiringly. “Bodie, that beautiful hat, the blazer and tie, and those slacks. And my word, those boots; you look stunning. Red, you and Tommy look like Manhattan bankers!”

“Speaking of bite, where are we eating?” Tommy asked.

“We’re going to Core, one of the best restaurants in London, with two Michelin stars,” Doug replied with excitement.

As the group was getting into the limo, Tommy whispered to Red that it was probably a good place to eat, since they run Michelin tires and all, but that he’d never heard of any of their tires being called Stars.

“Must be an English tire.” Tommy surmised.