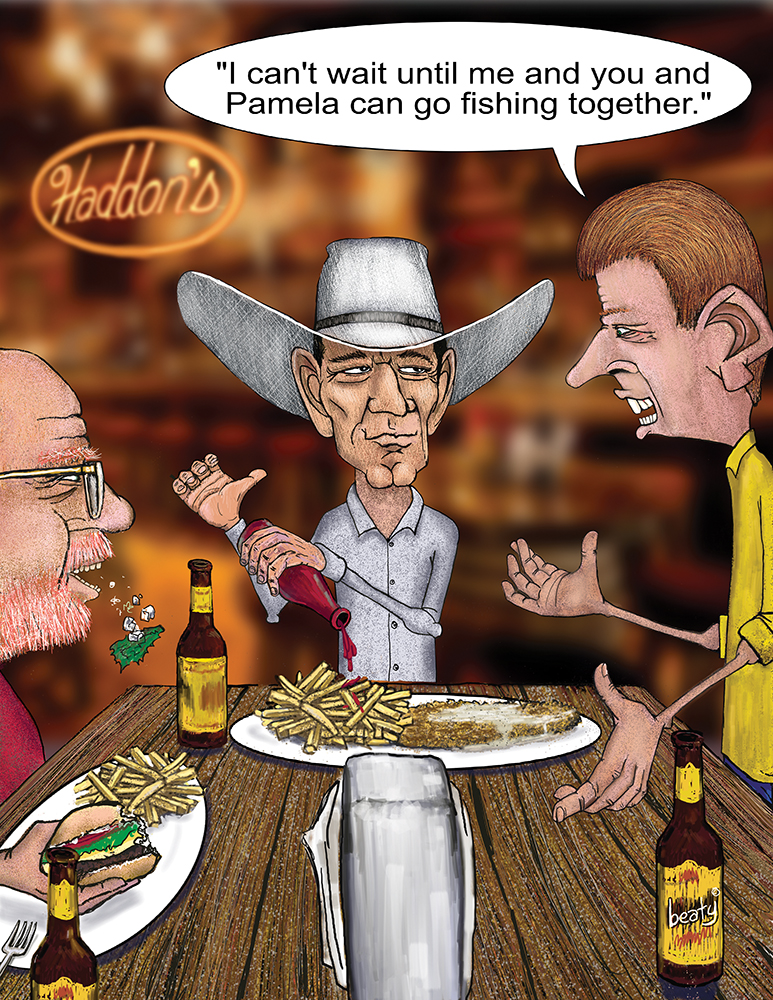 I need some fishing time, Bodie mused, staring out the window as the drab winter landscape flew by as he made the long drive from South Texas to Prasek’s Smokehouse. No sooner had that thought crossed his mind when his cell phone rang and a charming voice brought an ear-to-ear smile to his face.

“How are you Pamela?” he asked.

“I’m fine, Bodie, and I just found out that I will be in Texas for the New Year’s holiday instead of flying back to London. It looks as though I will be able to stop by your place.

“So you’ll be in town through the holidays?

“Yes, Mr. Sellers is having a small New Years Eve party at his home and I am supposed to somehow convince you to attend,” came Pamela’s sultry reply.

“Just tell me what time I need to be there…and I’ll be early!” Bodie teased.

The miles flew by as they chatted and Bodie realized how much he had missed talking with her. He hadn’t seen her since they returned from London and their phone conversations had been unfortunately brief. Suddenly realizing that he had passed Prasek’s, he signaled to take the main El Campo exit off US-59 at Highway 71 for a U-turn.

“What was that you said?” Pamela asked.

“Oh, nothing. I was so into our conversation that I missed my turn.

“Well, I’m certainly flattered that I had your undivided attention but you must be more careful when driving and talking,” she giggled.

Pamela said that she would most likely get to town on December 27 and the plans were to stay a week. They said goodbye and Bodie was excited that he was going to be able to show her around the ranch and, if the weather cooperated, maybe even take her fishing.

“Son! You haven’t had feelings like this in a coon’s age,” Bodie quipped aloud, slapping his thigh in excitement.

Bodie pulled up to the rear drop-off door where Prasek’s receives game animals and walked inside. An employee he didn’t recognize removed the quartered deer from his cooler and then searched the computer for Bodie’s order history.

“Just make everything into Czech-style link sausage like last time with cheese and jalapeno,” Bodie told the man.

A printer next to the computer spit out a couple of forms, one the man asked him to sign and another for Bodie to keep.

“Probably be at least a week or so; we’ll call you when it’s ready,” the man informed him.

Bodie was about to leave when he decided to grab some of Prasek’s famous ribeyes and New York strips to grill when Pamela made it down. “I’ll show her what a real Texas steak tastes like, grilled over mesquite coals,” he muttered to himself as he viewed all the fine cuts in the butcher’s case. He also picked up several dozen cookies of various types and an assortment of fresh kalaches for Monroe, Mr. Connor, Red and Tommy.

Bodie stopped by the ranch to check in with Monroe and Mr. Connor and drop off their pastries before making his way to the house to unload his hunting gear. While unloading the truck and carrying his gear, he looked around and wondered what Pamela’s impression might be of the place he called home.

I know for a fact that she’s never been to a fishing cowboy’s house, he speculated. But it is what it is and I am who I am. She’ll either accept me and this house or she won’t.

Getting everything unloaded and put away, he jumped back in the truck and headed for Haddon’s for one of Eloisa’s chicken-fried steaks, a couple cold beers, and to catch up on the local gossip.

Red’s golf cart was parked out front and the bright yellow sign on the back made him chuckle. Yosemite Sam with his two six shooters drawn, warning anyone close enough to read that they needed to “Back Off!”

Red was seated at the bar and noticing Bodie coming through the door gave his usual nod toward a table. “I’ve been wondering when you were going to come back and actually do some work,” Red greeted as he shoved a frosty mug across the table.

“Hellfire, Red, I worked the whole time,” Bodie answered, clinking mugs with his friend. “Been up every morning and in the deer stand before daylight. Hunted every evening, too!

Red laughed and assured Bodie he hadn’t missed anything around town. Except for Old Man Fowler’s house catching fire because he forgot he had bacon frying when he went outside for a smoke. It only got the kitchen though, and his wife had been hounding him for years for new cabinets and counters, anyway.

“Yeah, it’s either been raining or it’s been blowing, or it’s been doing both,” Red frowned as he took a big swig of suds. “I swear if I don’t get some fishing time in soon I’m going to lose my mind and take my wife to a casino or something.”

“Heaven forbid!” Bodie mocked with a false look of worry on his face. “What’s Ol’ Tommy been up to? I’m surprised he isn’t here.

“Oh, he’s been around alright,” Red lamented. “He’s been run off from every bait camp in town. Since he can’t fish he’d rather just hang out there and talk the bank fishermen to death until they leave.

“So, how was the hunting?” Red asked.

“Well, Red, I shot an old cull buck and let a bona fide monster keep on walking. I dropped the meat at Prasek’s and we should have us some fresh sausage in a week or so.

“Oh, say Bodie, have you heard that Pamela is going to be in town next week?” Red taunted him.

“Now how on earth did you find out about that?” Bodie asked.

“Well, Tommy was bored so he called Doug to see when he was going to come down and I guess he told him,” Red replied.

Bodie broke out in a grin. “Yeah, she called me while I was driving up from South Texas. We talked on the phone all the way from Refugio to El Campo.

“I bet that made for a short trip,” Red teased.

They chatted until Eloisa came with fresh mugs and Bodie ordered a chicken-fried steak and Red ordered a cheese burger.

“I’m on a diet,” Red explained. Bodie and Eloisa just raised their eyebrows.

“BODIE, BODIE, BODIE!” Tommy shouted as he ran up and crashed into the table, spilling both their mugs.

“You ignorant freak of nature,” Red shouted, reaching for a napkin.

But Tommy was too excited to hear or care, and just started jabbering to Bodie and everybody else within earshot.

“Man, I been missing you Bodie. The weather’s been terrible and I haven’t been able to go fishing. And, Red; he’s just been doing nothing and I’ve been waiting on you to get home so we can all go catch us some trout!

“It’s blowing about twenty-five knots out there right now, Tommy. And I’m afraid I don’t see fishing in our immediate future,” Bodie offered, hoping to calm him down a bit. “And besides, I have to go to the ranch tomorrow and catch up on things and start earning my keep again before Mr. Connor runs me off.

“We heard Pamela’s coming to town!” Tommy blurted loud enough for all to hear. Which of course caused everybody in the joint to look straight at Bodie.

Bodie felt a blush climbing up his neck.

“Jeez, Tommy! Keep it down,” Bodie said softly but sternly. “Not everyone in here needs to know that she’s coming to town, or even who she is.

“Well, yes, she’s a girl and she’s my friend,” Bodie agreed. “But she’s not my girlfriend.

“Oh, but she surely will be once she gets down here and you show her around and take her fishing. She’ll never want to leave,” Tommy chortled.

Red was about to say something but Eloisa arrived at the table with their food and fresh beers, including one for Tommy.

“Who’s that you say is coming to town, Tommy?” she asked.

“So you’ve got you a girlfriend, huh Bodie?” Eloisa smirked.

Bodie wanted to crawl under the table. “Yes, I have a friend who happens to be a girl. And why must everybody be prying into my affairs, anyway,” he asked shyly.

“Right! You know a lot of girls, including me, but I didn’t know you had a girlfriend,” she shot back.

Bodie gave up and was putting ketchup on his fries when Tommy said, “Oh man, I can’t wait to go fishing with you and Pamela.”

Bodie froze. A bit of onion and some lettuce fell from Red’s mouth as Tommy beamed like a lighthouse.

“Yeah, I can’t wait either,” Bodie offered, still fooling with the ketchup jar.