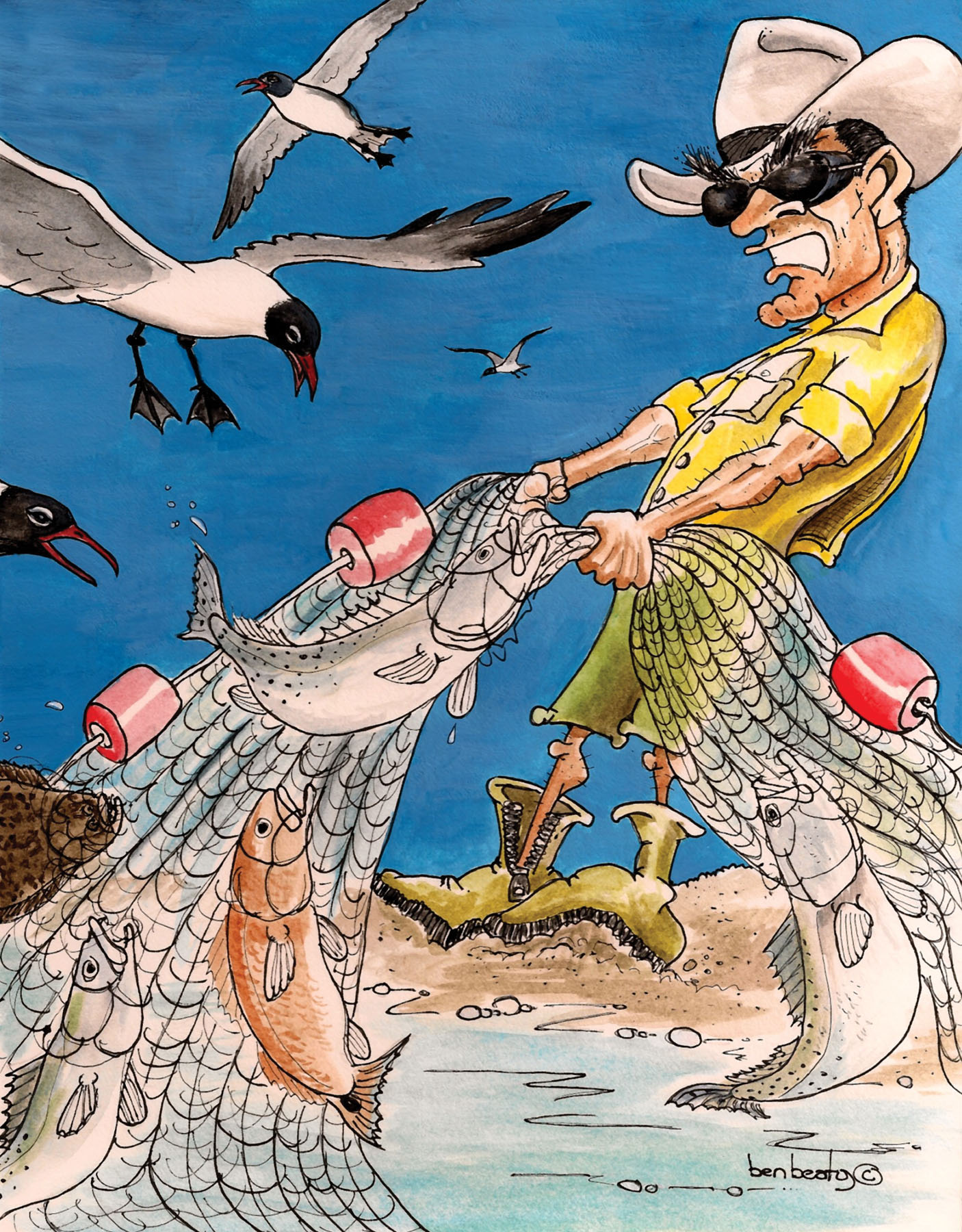 Bodie jerked the throttle back as soon as he saw the partially submerged float but the forward progress of his boat pushed him past and he felt his lower unit hang up.

"Netters!" Bodie said out aloud to himself.

He untangled the hated mesh and started pulling the net to see how far it stretched and what was in it. Drum, a few flounder, a bunch of redfish and a lot of trout, some horse mullet and a few hardheads hung dead-stiff in the deadly monofilament webbing. Bodie started walking the net to see where it terminated and some 200 yards later he came to the stake that held it in place. Unfolding his pocketknife he cut the rope and began dragging the net toward shore. He couldn't do anything for the fish and, since they appeared to have been in the net for quite a while, they weren't edible. The wasteful sight made him spit in anger.

"Some outlaw set this net and never returned to run it," Bodie hissed to himself.

When he had all the net on the shore he went back to his boat and called the local game warden on his cell phone. He told the warden, who happened to be a friend, what he had found and where it was located. The warden asked him to stay there and wait for him.

Warden Wigginton arrived at Bodie's location about 45 minutes later and made some photographs before he and Bodie rolled it up and loaded it into the warden's boat.

"This is the third net that has been reported this month, Bodie. They're getting braver and they must be making money. They don't even seem to care if they lose their nets. We do what we can but we're spread pretty thin, you know. We could sure use you local fishermen to be our eyes and ears for us while you're out here on the bays," the warden said.

That night at Haddon's Place, Bodie let it be known that he had found a gill net near the entrance to Crab Bayou. Someone asked what he had done with it and Bodie said he had turned the net over to Warden Wigginton. Tommy Meyers chimed in that the game wardens always hold the nets for evidence and then burn them; and that was a good thing. There were a couple of dirty looks cast their direction and Bodie took notice of the fact.

Later over dinner and a cold beer, Bodie told Tommy to go home and pack a lunch and some clothes because the two of them were going to do a little late night exploring.

"I don't feel much like doing any floundering tonight Bodie. My leg hurts, and besides, I'm pretty sure my lantern is busted and my gig is rusted so I guess that leaves me out," Tommy squeaked while guessing what Bodie was planning.

"We're not going floundering Tommy, we're going hunting. Meet me at the boat lift around ten," Bodie replied to his squeamish friend.

The night was dark with no moon and it was dead calm. It seemed the cables and pulleys made more noise than usual as they lowered Bodie's boat into the water; it was that still.

"Every netter in the world will hear all this noise, Bodie, and they'll know we're coming so maybe we should just stay home tonight. What do you think, buddy?" Tommy whimpered.

"Unless you told someone what we're doing Tommy then no one is going to know what we're about, we could be floundering or going for a night wade. Stop worrying about it." Bodie said.

Bodie idled into the channel while setting the GPS to take them to a spot he thought would be a good one to sit watch and listen. Jumping the boat on plane he handed Tommy the Q-Beam to light the way.

"If we use a Q-Beam they'll see us and know we're out here Bodie, we can't use a light and that means running lights too!" Tommy cried.

"Now look here Tommy Boy, if we're running around out here with no lights they'll sure as heck know that somebody is out and about and probably snooping. As still as it is they'll hear the outboard for miles. We might as well make like a couple of guys heading out to do some night fishing," Bodie fired back with authority.

Running just fast enough to hold the boat on plane, Bodie steered through several cuts and then across the open bay. Tommy laid the light dutifully on every crab trap float, piling and such, while Bodie steered carefully clear of each. After a twenty minute run, Bodie told Tommy to kill the light and eased the throttle back to neutral. When the boat settled in the water, Bodie switched the engine off and raised the motor a little on the jack plate. In a few seconds they felt the bow of the V-hull nudge hard sand and Bodie set the Stake-Out Stick.

After thirty minutes of just sitting, looking and listening, Tommy commented that he needed a snack and a drink and stood to open the cooler he was sitting on. Bodie turned to tell his friend to grab him something as well when he caught a faint glimmer of light just off the starboard bow.

"Tommy I think I just caught the flicker of a light off to the right there, have you seen anything over that way?" Bodie asked.

"Nope, nothing but a firefly now and then is all I've seen Bodie, no spotlights or nothing like that." Tommy said.

Bodie stared down at his friend and said "Tommy, use your head boy. There ain't any dadgum fireflies this time of year."

Bodie scanned the area carefully with his binoculars when suddenly it appeared again. Just a faint glimmer of light is all, but what he saw left little doubt. Way too weak for a lantern or normal flashlight, Bodie figured what he was seeing was a cap light, the tiny ones fishermen use, probably to give just enough light to work close and not enough to be seen from a distance. The person using it was moving far too much to be in a boat and that meant they were probably in the water.

Bodie dialed Warden Wigginton on his cell-phone to let him know where they were and what he thought was going on. Warden Wigginton advised Bodie that he was on a stakeout about twenty miles northeast of their location but he would hurry.

"Do not try to apprehend anyone or anything like that, Bodie. Just stay put and keep an eye out. I'll be there as quickly as I can," the warden said switching off the phone.

"What did he say Bodie? He didn't say we had to do anything did he? I mean he surely doesn't want us to try to arrest anyone or nothing like that, I mean we're not lawmen, so I mean we should probably just not do anything right?" Tommy whined.

An hour later Bodie and Tommy could hear the outboard and see the spotlight as Warden Wigginton closed the distance on them. As the warden's boat slid up beside Bodie's the warden apologized for the delay but he was farther away than he thought he had been.

"So have you seen anything lately?" the warden wanted to know.

"Every now and then I'll see a flicker but it's been a good 30 minutes since I've seen any light at all. I think they may have made a set and took off but I'll be danged if I heard a motor or saw any light when they left. No instrument lights or anything.

"Let's ease over that way and see if we can find anything," the warden replied.

Bodie fired his boat up and backed off the sand bar then followed the warden to the general location where Bodie had last seen the faint light. Tommy shined the spotlight and looked the opposite way that the Warden was shining his light to see if he could pick up anything in the darkness.

Bodie and Tommy both knew the area probably better than anyone else and they knew that there was a gut that ran parallel to the shoreline about where Bodie had seen the light. They idled their boats over that way when Tommy's light picked up something in the water. It was a cork line and the boys had found their gill net.

While Tommy and the Warden pulled the net Bodie studied the footprints that had been left in the sandy shore. He noticed where a boat of some kind had been pulled up onto the sand but it had left an odd impression, like none he had ever seen.

Tommy cringed when he saw that the net had already begun to kill fish. A school of redfish had swum into the killing net in the short time that it had been set and were already drowned. Pulling the fish from the net, Warden Wigginton told Tommy to place them in the large cooler in the front of his boat. He'd see to it that some family who needed fresh fish got them come morning.

Bodie helped load the net into the warden's boat and asked both he and Tommy to walk over where he had found the tracks in the sand.

"Nothing to tell from the tracks, looks like they were wearing ordinary wading booties like most wade fishermen wear, but what kind of boat hull would leave a mark like this when pulled up onto the sand?" Bodie asked.

Warden Wigginton and Tommy knelt and examined the impression and like Bodie said, they looked strange, not very wide and not very deep as if the boat was much lighter than the type of skiff netters use.

"I know what made this impression," Tommy blurted out. "It was a kayak!"

Bodie and the warden looked at each other then at the hull marks. In unison said to Tommy, "You're right!"

Farther down where the other end of the net had been tied, they found three more sets of marks they thought had been made by a kayak; different in a way, but the same depth and width.

"It would seem so," answered Bodie. "Makes sense, though. No noise, no lights, no wake or prop wash. All they have to do is follow the shoreline and stay shallow so as not to be seen. It's a handy piece of work."

Warden Wigginton and Bodie are hot on the netters trail. Join us next issue for the conclusion.