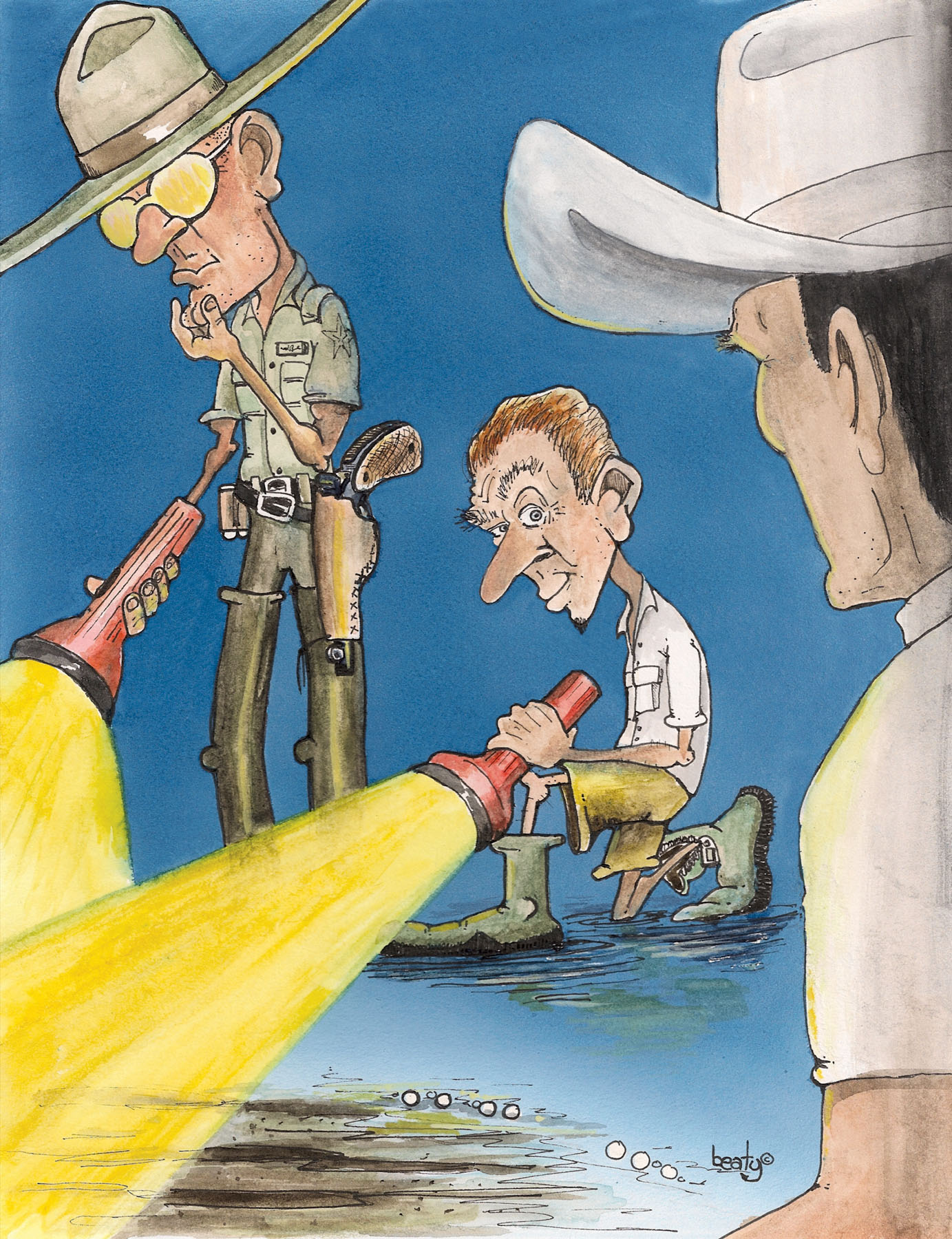 Bodie dialed Warden Wigginton on his cell-phone to let him know where they were and what he thought was going on. The warden advised that he was on a stakeout twenty miles away but he would hurry.

"Do not try to apprehend anyone or anything like that, Bodie. Just stay put and keep watch. I'll be there as quickly as I can," the warden said switching off his phone.

"What did he say Bodie? He didn't say we had to do anything did he? I mean he surely doesn't want us to try to arrest anyone, we're not lawmen so we should probably just not do anything, right?" Tommy whined hopefully.

"Calm down, Tommy, we're going to for the warden," Bodie assured, still peering through his field glasses.

Almost an hour later Bodie and Tommy could hear the outboard and see the spotlight as Warden Wigginton closed the distance. As the boat settled the warden apologized, "I guess it was further than I thought. Seen anything lately?"

"Every now and then a flicker but it's been a good 30 minutes. I think they may have made a set and took off but I'll be danged if I heard a motor," Bodie answered.

"Let's ease over and see if we can find anything," the warden replied.

Bodie fired his boat up and backed off the sandbar following the lawman to the general location they had last seen the light. Tommy worked the spotlight to see if he could pick up anything in the darkness. Bodie and Tommy both knew the area probably better than anyone and they knew a gut ran parallel to the shoreline about where Bodie had last seen the light. Idling along, Tommy's light picked up something in the water. It was a cork line and the boys had found their gill net.

While Tommy and Warden Wigginton pulled the net, Bodie studied the sandy shore for clues. He noticed where a boat had been pulled onto the sand but it left an odd impression, like none he had ever seen.

Tommy cringed when he saw that the net had already begun its deadly work. A school of redfish had swum into the killing net in the short time that it had been set and were already drowned. Pulling the fish from the net, Warden Wigginton told Tommy to place them in the large cooler in the front of his boat. He'd see to it that some needy folks got them come morning.

Bodie helped load the net into the warden's boat and then asked Warden Wigginton and Tommy to walk over where he had found the tracks in the sand.

"Nothing to tell from the tracks, looks like they were wearing ordinary wading booties like most of us do, but what kind of boat do you suppose made these marks?" Bodie asked.

Warden Wigginton and Tommy knelt and examined the impressions. Like Bodie said, they looked strange, not very wide and not very deep, as if the boat was much lighter than a common skiff.

"I know what made this impression," Tommy blurted out. "It was a kayak!"

Bodie and the warden looked at each other then at the hull marks. In unison they said to Tommy, "You're right!"
Farther down where the other end of the net had been tied, they found three more sets of the strange marks; different in a way, but the same depth and width.
"Four kayaks total?" asked the Warden.

"It would seem so," answered Bodie. "Makes sense, though. No noise, no lights, no wake or prop wash. All they have to do is follow the shoreline and stay shallow so as not to be seen. It's a handy piece of work, no doubt about it."

Warden Wigginton told Bodie and Tommy they could head in and home to bed. He said he was going to hang out a while and look for signs in the morning where the kayaks had been pulled out of the water. Bodie and Tommy said good night and headed back to the boat slip.

"Bodie, I think it was two fellas that set those nets. I think they used one of the kayaks to haul the nets and one to put the fish in while they paddled the other two. You know they could pull the net out of the kayak while wading along side of it and it could be set a lot faster than trying to string it out any other way." Tommy said.

"Tommy you sure have your head on straight tonight. It sure could have been done like that and right now I can't think of a better explanation. I'll run it by Warden Wigginton when I speak with him tomorrow." Bodie told his friend.

The next morning Bodie paid a visit to the county sheriff, an old friend and who carried Bodie as a reserve deputy years earlier. Bodie resigned that commission when he realized that between his fishing and the time that he spent working on the Lazy C he simply had too little time to fulfill the obligation. The Sheriff was glad to see him and over coffee he asked Bodie what he could do for him.
"Sheriff," Bodie began, "We have a problem with netters down on my home waters and the wardens are spread pretty thin right now. I was thinking that if you would reinstate my commission it would allow me to act in an official capacity, maybe even make an arrest should a situation arise."

The Sheriff folded his hands and gave Bodie a long look. Bodie tried not to stare at the man across the desk and instead looked behind him at the huge map of Texas on the wall. After a few seconds the Sheriff cleared his throat and leaned forward on his desk.

"Bodie," the Sheriff said, "I could use another reserve officer but I think what would suit you better would be a fulltime non-paid position. The department would carry your commission and insurance but you wouldn't be tied to any set of required hours. I think you could do a lot of good down there in a covert way; consider yourself deputized."

Bodie and the sheriff talked a while and the Sheriff gave Bodie a deputy's badge and had him sign some papers. When all was done they shook hands. The sheriff wished him well as Bodie climbed into the cab of his truck to head back out to the ranch.

Rolling down the two lane blacktop, Bodie phoned Warden Wigginton to tell him what had transpired and naturally the warden was happy to hear the news. Bodie also related Tommy's theory of how the kayaks were being used to hauls nets and fish. The warden agreed with Tommy's theory and told Bodie he had been unable to find any sign where the kayaks had been unloaded and hauled out but would continue looking. In the meantime he told Bodie that he would appreciate all the help that he could get and cautioned him to be careful.

Join us again next month for the conclusion.