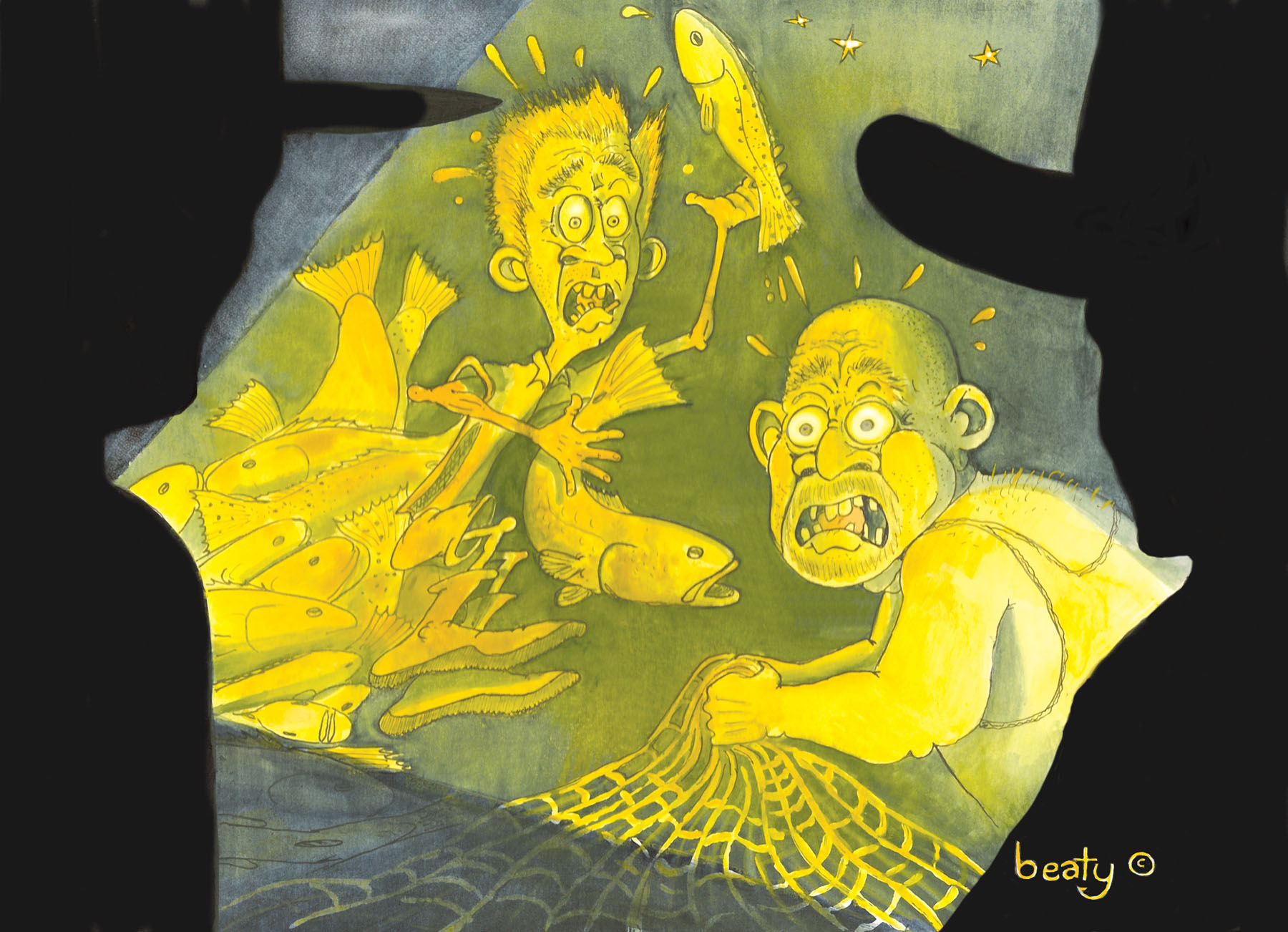 Bodie didn't see the blow-up because there wasn't one. The trout just came up and sucked the Mirrolure down in the classic toilet bowl flush and started taking line. Bodie set the hook and let the fish pull all the line it could then began slowly bringing it back to him. Tommy was wading up a slough hoping to find a school of reds when he noticed something on the muddy bank.

"Hey Bodie, you better come here and take a look at this." Tommy yelled.

Bodie lifted the trout and admired her glistening length before reviving her and completing the release. Wading back to the boat he iced two fat fryers and then made his way to where Tommy was standing. There in the mud were two of the same impressions they had discovered with the warden the night they found the last net.

The slough fed into a medium sized marsh lake and Bodie and Tommy moved along the muddy bank until they came to the edge of the lake. It didn't take but a minute for Bodie to see the net strung across the waist deep water. Bodie estimated that the net was well over three hundred yards long and he believed that the people who set it wouldn't want this one to be found and destroyed.

"They're getting better at hiding their nets Tommy Boy. We wouldn't have known it was here if you hadn't waded up this slough and noticed those skid marks. I have an idea how we might go about catching these netters and I think we can do it tonight, but we're going to need some help." Bodie said to his friend.

Bodie used a piece of driftwood and stalks of marsh grass to erase all their tracks along the slough before he and Tommy pulled anchor and headed back to port. While running back across the bay Bodie told Tommy of his plan.

On the back side of the lake within fifty yards of the marsh grass was the start of the beach that composed most of the barrier island. Bodie figured that if he and a couple of wardens could get a ride in one of the departments 4x4 trucks down the island to where the lake starts, they could hide and keep an eye on the nets from a direction the netters wouldn't be looking. In the mean time, another warden or two could stand ready in boats well away from the slough but near enough to close in when alerted via radio.

Bodie called warden Wigginton telling him what they had found and laid out his plan. The warden agreed and said that he would make it happen.

Later, with the night as dark as it had been the first time they had seen the netters, Bodie accompanied two Game Wardens and made the trip down the beach to the back side of the lake. Tommy had already announced that it might be better for him to stay in town and keep an eye out for suspicious-looking people. He was doing just that, and enjoying a cold beer at Haddon's Place, as Bodie and the wardens crept into their hide.

"I'm sort of like on a secret mission," Tommy bragged to Eloisa. "I can't tell you what it is but trust me, I'm working with Bodie and Parks & Wildlife on this and it's BIG!"

Luckily there were no other customers within earshot and Eloisa simply shook her head and drew Tommy his second frosty mug.

The wardens had toys that Bodie didn't have access to and the night vision goggles that they were looking through at the moment were just a few of them. The night took on an eerie green hue while looking through the goggles and Bodie thought how great they would be for running a boat at night. At 11:00pm on the dot Bodie saw movement across the lake where the slough dumped into the lake.

"I think they've come back to work their net," Bodie whispered to the warden crouched beside him.

They watched the forms took shape as the kayakers paddled into the lake. And just as Tommy had guessed, there were two men, each paddling a kayak and towing another. When the two men reached the starting point of the net they slipped out of their kayaks, turned on cap lights and started working, one man on each side. They pulled net quickly and tossed the fish that they wanted to keep into the other kayak. The other fish they simply discarded to rot or be eaten by raccoons and crabs. When the men made it to the stake at the end of their set, Bodie and the Wardens removed their night vision goggles and lit the men and the lake up with spotlights. The surprised netters had nowhere to go but back the way that they had come and it was obvious they were going to make a run for it. The wardens in the bay boats had been alerted and motored up to block the slough. The frightened outlaws were in the trap and gave up sheepishly as they were taken into custody.

Back at the dock, Bodie recognized the men as the very shame that had shot him and Tommy the dirty looks after Tommy had made the comments about destroying nets.

During their confession they coughed up the full story. They had been staying in a seldom used cabin on a spoil island as a base on the bay to store the kayaks and hide their skiff. The outlaws would run their boat in the daylight to the cabin and then after nightfall load the kayaks and paddle out to set their net. They would then wait at the cabin until time to run the nets and then use the empty kayaks to haul their nets back along with the fish. The kayaks and nets would be left in the cabin and the men would use the power boat to haul the fish to a place where a truck could back right up to the water and they would off-load their catch then head back to port.

Bodie was tired and his crews had fence to build and windmills to maintain the next morning so he bid the wardens good night and was going to head back to the Lazy C. He figured that Tommy could wait until the next evening to hear about catching the nettersno point in interrupting his part of the investigation.

Bodie would like everyone to keep an eye out for illegal netting activity. If you ever happen to find one, alert the nearest Game Warden or contact Operation Game Thief at 800-792-4263 (GAME).