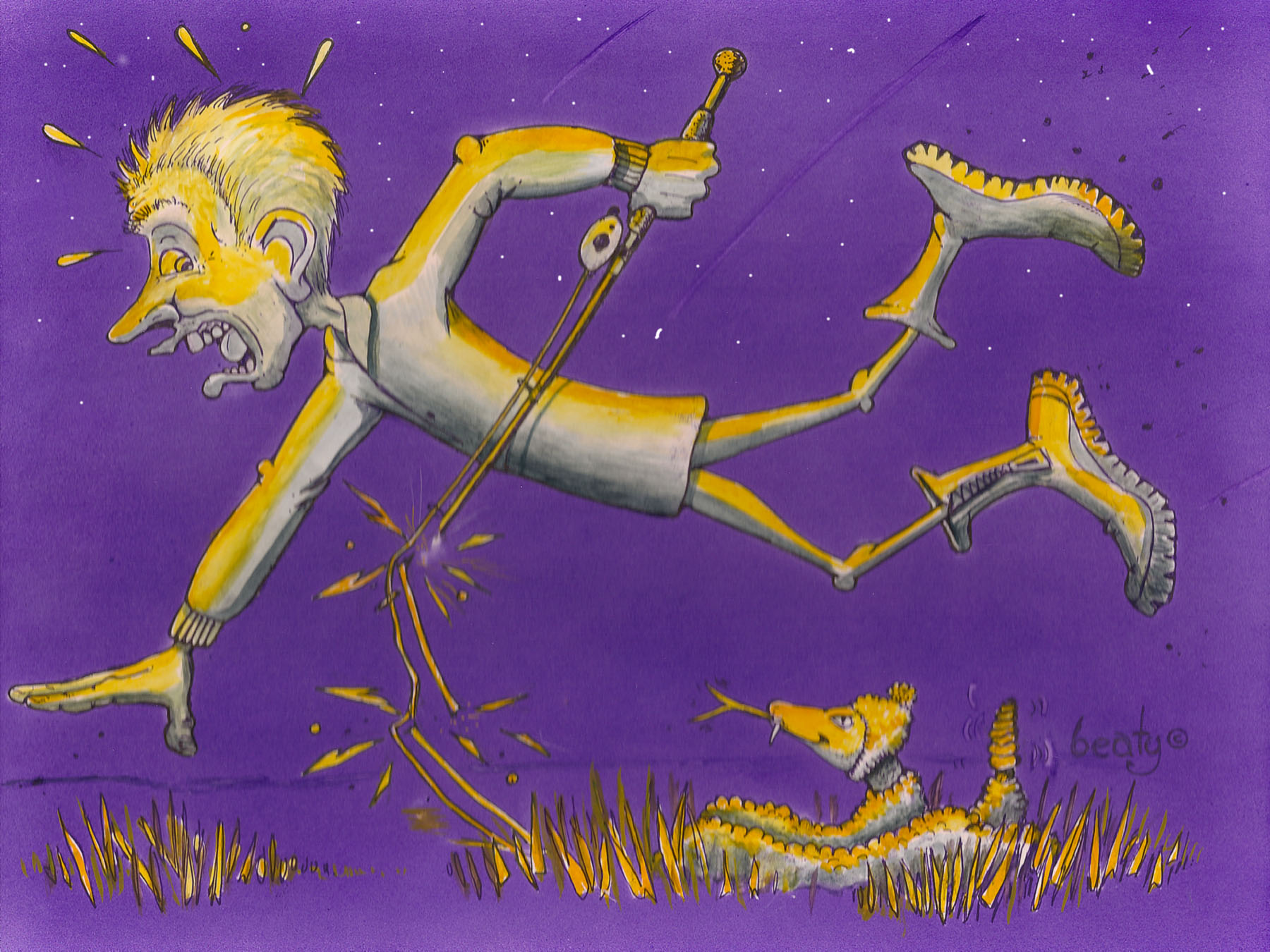 Smoke from the driftwood fire rose up and circled around Bodie's ancient Stetson as he added another chunk of wood to the blaze. It was cold and very still; the full moon lit the early January night like a giant Q-Beam. A meteor streaked across the sky, a giant tracer fired from an unseen gun in space, mocking the moon's bright glow.

Bodie's friend and fishing partner, Tommy Meyers, ran into the camp and dumped an armful of driftwood next to the fire. "I thought I heard a rattler while I was picking up wood, Bodie. Maybe we should cut our trip short."

"It's too cold for snakes, Tommy. You probably just brushed some dry saltgrass or something," Bodie said.

"Well it sounded like a rattler," Tommy insisted, "and I could hear something sneaking around in the grass like it was stalking me or something, so it could have been a cold weather rattler," he muttered to himself. Bodie smiled at his timid friend's nervousness; Tommy just didn't like being out in the dark.

The coffee pot began percolating, the hot coals next to the fire working as well or better than any gas stove, and Bodie pulled out two beat up, stainless cups from his bag. Using his coat sleeve as a potholder, Bodie grabbed the hot handle and poured two cups of steaming coffee. "Coffee's ready, Tommy," Bodie told his friend who nearly standing in the fire, staring back into the saltgrass. Tommy moved closer to Bodie and gratefully took the steaming cup.

"In my bag Tommy; help yourself," Bodie sighed. Tommy rummaged through Bodie's bag and found a Ziploc containing packets of sugar and creamer, a welcome surprise.

"Can I have a honey bun Bodie? There's a couple in your bag!" Tommy pleaded.

"Help yourself, but make sure you leave me one for later," Bodie said. "Didn't you bring any food, Tommy?"

"I got some sardines in mustard sauce, some cans of those vie-ennie sausages in bbq sauce that I like, some cans of beanie weenies, some dried sausage from deer season three years ago, and crackers if you want some, Bodie," Tommy proudly offered.

Sipping coffee, Bodie walked the narrow strip of sand to the water's edge where he had jammed a stick earlier. Lit up by the moonlight, Bodie could see that the stick was now quite wet.Tide's coming in, Bodie thought to himself. Just then, something rammed him from behind. "What are you doing, Tommy?! You almost knocked me into the water!" Bodie yelled as he wrung spilled coffee out of his coat sleeve.

"I, uh, well, thought I'd better go with you in case you saw a cold weather rattler or something," Tommy finished lamely. Bodie gave his friend a narrow-eyed look that made Tommy flush in embarrassment, then headed back to the fire with Tommy right on his heels.

Refilling his cup, Bodie thought about the school of redfish the helicopter pilot had seen as he flew over a channel the day before, the same channel that he and Tommy were now camped on. Mr. O'Connor had hired the helicopter and its pilot to help Bodie and his crews gather cattle into working pens and trucked to a new pasture. When the work was done, the pilot told Bodie that he had seen a huge school of fish moving through a channel, covering at least a good acre of water. Bodie asked the pilot for more details and found that he knew exactly the place the pilot spoke of. The pilot told Bodie that he would be happy to take him up in the chopper but Bodie declined the offer, telling the pilot thanks but he knew the area. Besides, the helicopter was costing his boss a lot of money and not for finding fish. Now, Bodie hoped the school would be moving into the channel with the tide tonight.

"Better get your waders on and grab your gear, Tommy. Those fish can't be long in getting here as fast as the tide is moving in!" Bodie whooped.

"Maybe we could just get in the boat and sort of drift with the tide, Bodie. That way we wouldn't have to wade and get all cold and stuff," Tommy suggested hopefully.

"Nah, a boat will spook them, and if it's as big as that pilot claimed, we're in for a night of catching that doesn't come around very often, so get ready," Bodie told his friend.

Pouting, Tommy started pulling on his waders, and after falling twice (and three more times while trying to put on his wading boots), he finally succeeded. Bodie was already on the shoreline with his rod and reel in hand, waiting not quite patiently for his friend. Realizing he was 20 yards from Bodie, who offered him safety from things that go rattle in the night, Tommy sprinted towards his friend and fell on his rod breaking it in half. "Dang it! Bodie, I broke my rod and didn't bring another one, so I'll just sit in the boat and let you get the fish," Tommy lamented, sounding a bit too relieved.

"No, you'll go to the boat and get one of my spares and you'll do it pretty dang fast, too," Bodie said. Tommy recognized that tone and hurried to the boat, only tripping once in the process. He grabbed an expensive, seven-foot Laguna with a new Calcutta reel on it and carefully made his way back to where Bodie waited.

Bodie pointed with his rod, "The fish should come in right over there Tommy, where the sand bar dips down to about three feet. There's more than enough room for both of us to stand on hard bottom and not crowd each other, so let's spread out some."

"You ever hear of cold water sharks cruising around here, Bodie?" Tommy asked.

"No" was all the reply he got, so Tommy inched slowly away from his friend, careful in not moving too far.

With the bright moon, there was no need for head lamps, and together Bodie and Tommy slid their feet along the sandy bottom, feeling the cold water as it squeezed their waders against their legs. Tommy started casting, reeling his soft plastic bait back slowly to him. After doing so about ten times, he announced, "Well, they didn't show up tonight, Bodie, so I guess we might as well go home right?"

"Give it time, Tommy," Bodie grinned. "They'll be here when they get here and not before, so stop wasting casts, and don't be complaining about a sore shoulder from empty casts either." Tommy cursed under his breath since that was going to be his next excuse for a nice warm bed back at his house.

They both saw the wake. It was subtle but noticeable, quite wide, and it was coming fast. "They're coming Tommy Boy! Cast out ahead of the school and let your lure sit for a while before you work it back. Let's not to spook them before we get hooked up," Bodie instructed. Both watched the school of fish move towards the mouth of the channel, stirring up the bottom as they foraged for whatever they could find along the way. They both cast slightly ahead of the moving wake and slowly twitched their rods, hoping the fish would find their lures.