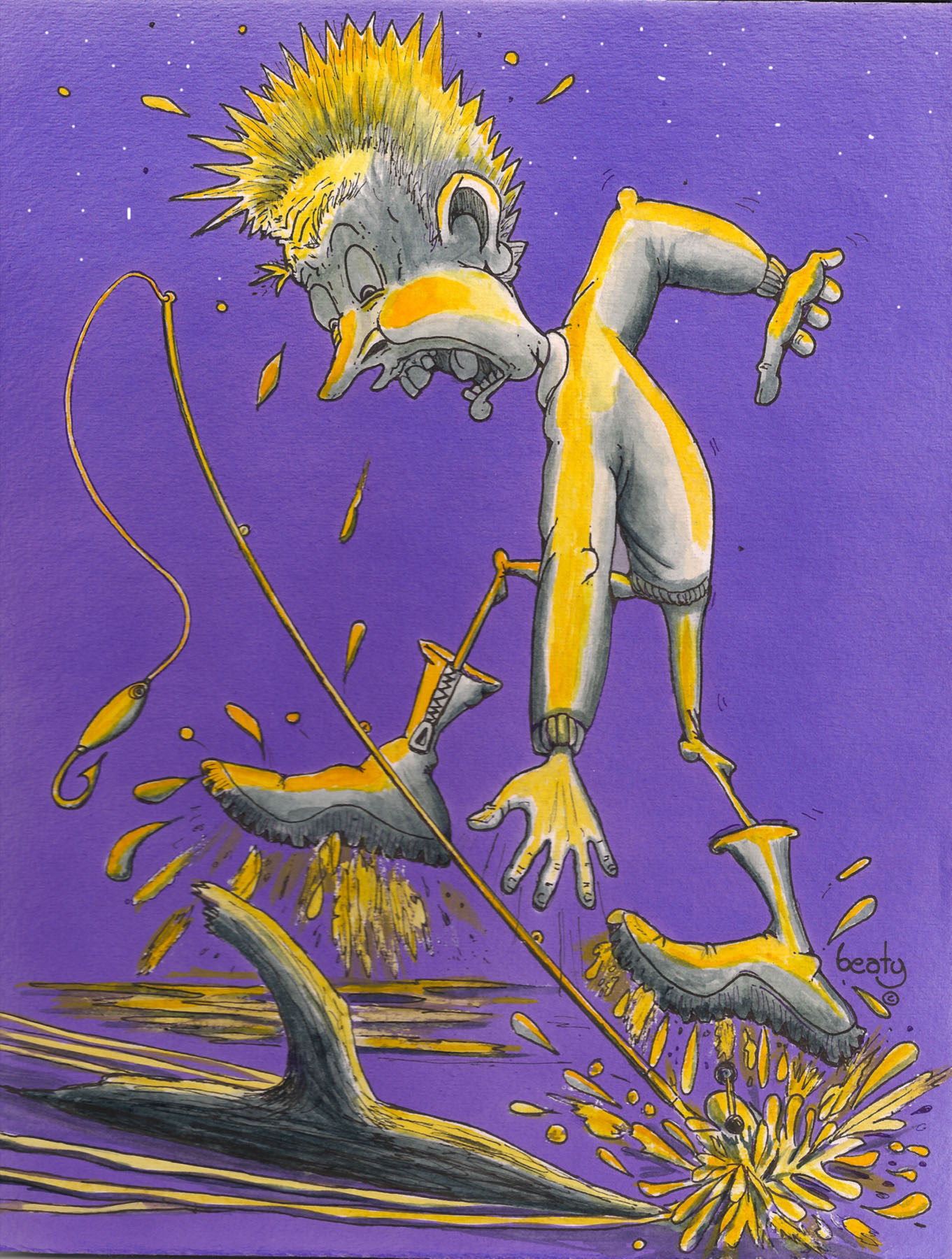 An audible grunt caused Bodie to turn and look at his friend as Tommy's rod bent and gave in to a strong fish that had been fooled by the plastic lure the first hookup of the night. Bodie threw another cast and almost as soon as his lure hit the water he felt the thump. He knew when he set the hook that it was a huge fish. Tommy was having some trouble standing in one spot while playing the big red on the end of his line. "I don't think this fish knows he's hooked," Tommy grunted. Bodie simply nodded his head as he was thinking the same thing. The fish he had hooked was oversized and very strong; Bodie was glad he had spooled up twenty-pound line for this night trip. Slowly, the fish started turning, allowing Bodie to gain line. Tommy was getting some of his line back, too, and was the first to hoist a large redfish into the moonlight. "She's about thirty-five inches or so Bodie," Tommy grinned.

Bodie's fish still had fight left in it and began stripping more line. Bodie tightened the star drag just a hair and started forcing the fish back to him. When the tired red rolled over next to his left leg, Bodie found he couldn't get his hand around its back to grip it and had to cradle his rod under his right arm and use two hands to lift the fish. "Forty-plus inches," Bodie smiled triumphantly, "and more to be caught." Bodie released the tired red and watched it stir up sand as it swam to rejoin the school.

Tommy was fighting his second of the night, and it was proving more difficult than the first. The fish was taking so much line that Tommy thought he might have to tighten the drag down to break it off and save line. But just then he felt the lure come tear loose from the fish's mouth. Tommy reeled in as fast as he could and tied on a new lure.

"Do we want to keep and tag any of these fish Bodie?" Tommy asked.

"Nah we don't need them Tommy, and besides it's more fun to catch and release them than to try and eat these big ones," Bodie replied. Tommy started whining that maybe he could make one taste good if he slow cooked it on the pit and that maybe he might want to mount one and hang it over the bar at Haddon's. "You tried making that javelina taste good on the pit once, too, remember? You invited everyone you knew to a free BBQ and nothing but the tater salad and beans Eloisa brought was edible. And do you really want to pay to mount one of them? I thought you were saving money for a new boat?" Bodie reminded him. Tommy muttered something under his breath and pretended to concentrate on his fishing.

An hour passed and Bodie released what he decided would be his last fish of the night. The drag on his Calcutta reel was making a noise that told him it was dry and probably burned, and although he hated to admit it, his arms were getting tired from fighting these powerful fish.

He was about to tell Tommy to spool it up when Tommy hooked up with another of the strong fish. Bodie could hear the line peeling off of his friend's reel. "Let's go when you get that fish in and released Tommy boy" Bodie said.

"Heck no, Bodie! Let's stay and catch these fish until they quit biting!" Tommy insisted.

"Our reels need attention, Tommy, and besides I know you're tired" Bodie countered.

"You have more reels in the boat, Bodie; we can use them. I plan on catching a really big one and smoking him in my pit. I'll invite everyone at Haddon's to come over, and I'll get Eloisa to make tater salad and beans, just in case!" Tommy chattered with wild excitement showing in his eyes.

Bodie sighed and headed off to get another rod and reel. He just hoped his friend would tire soon. As he started back to the shoreline, he noticed a large log just at the water's edge with a protruding limb that looked quite like a shark fin. With a devilish grin, Bodie set about putting his newly formed plan into motion.

"What?" Tommy grunted as he set the hook on another fish.

"I was thinking about what you said earlier about cold water sharks, and I think you're right. They do exist. I remember a game warden telling me about one once upon a time," Bodie said quite seriously. Tommy stopped fighting the fish and looked around, then realized what Bodie was up to.

"Bodie there ain't no cold water sharks around here, and you should be ashamed of yourself for even trying to fool me that way."

"Okay Tommy, whatever you say. I was just remembering is all," Bodie defended.

Bodie moved the log out into the current and, aiming it as best as he could, set it moving forward towards Tommy. Satisfied that it was going to produce the desired effect, Bodie yelled to his friend, "I think I just saw a shark or a gator, Tommy! You better get to shallower water!

"Pfft give it up Bodie. I ain't gonna fall for that. Why, everyone knows that gators bury up with the cold and besides, I made that up about cold water sharks earlier cause I wanted to go home," Tommy snickered. Still, he scanned the water with a nervous sort of look.

"Okay, well I'm going to head back to the fire and start getting our gear back to the boat. You let me know when you're ready to go, and we'll head back, and for God's sake watch out for sharks," Bodie warned.

Bodie was up on the bank watching the log move towards his friend but lost sight of it as it floated up towards Tommy. Tommy let out a shriek and started running back towards the bank, almost as if he were on top of the water. "What the heck is wrong with you, Tommy?!" Bodie yelled.

"Shark! Big shark's tryin' to get me, Bodie!" Tommy screamed as he thrashed through the water.

Tommy finally collapsed onto the sand while Bodie watched the log drift up the channel with the current. It does look like a shark, thought Bodie as he watched the "fin" in the moonlight.

"It almost got me!" Tommy gasped as Bodie helped his friend to his feet. "It hit me to see if I was edible and it was coming back to chomp me with its cold-water shark teeth, but I got away at the last moment!" Tommy cried. Bodie said nothing, trying his best not to burst out laughing. Regaining his composure, he looked down on the sand for the rod that Tommy had borrowed but didn't see it anywhere.

"Where's my rod and reel you were using Tommy?" Bodie asked.

"I threw it at the shark when he almost got me Bodie. That rod saved my life for sure and certain when it hit the shark," Tommy replied with a look of horror still on his face.

"That was a five-hundred dollar rig, Tommy!" Bodie yelled.

"But it did save my life, Bodie, and without it, I'd be shark chum right now" Tommy puffed.

Bodie looked for the rod in the clear water for an hour while Tommy kept a look-out for sharks, holding Bodie's revolver just in case, but he never did find it.

While loading their gear into the boat, Tommy kept on talking about how much he liked this night fishing now, but how it would be safer to do it out of a boat what with the cold water sharks and all. Bodie just bit his bottom lip in consternation.

Bodie idled the boat away from the shoreline towards deeper water; then Tommy said, "I can't wait to tell everyone at Haddon's about how that cold water shark almost got me and how throwing your rod and reel at it saved my life, Bodie. That's going to really stir them up!" Tommy exclaimed. Bodie bit a hole in his bottom lip.

"Hey, your lip's bleeding Bodie," Tommy said with concern in his voice.

"Yea I know" was all Bodie could say.