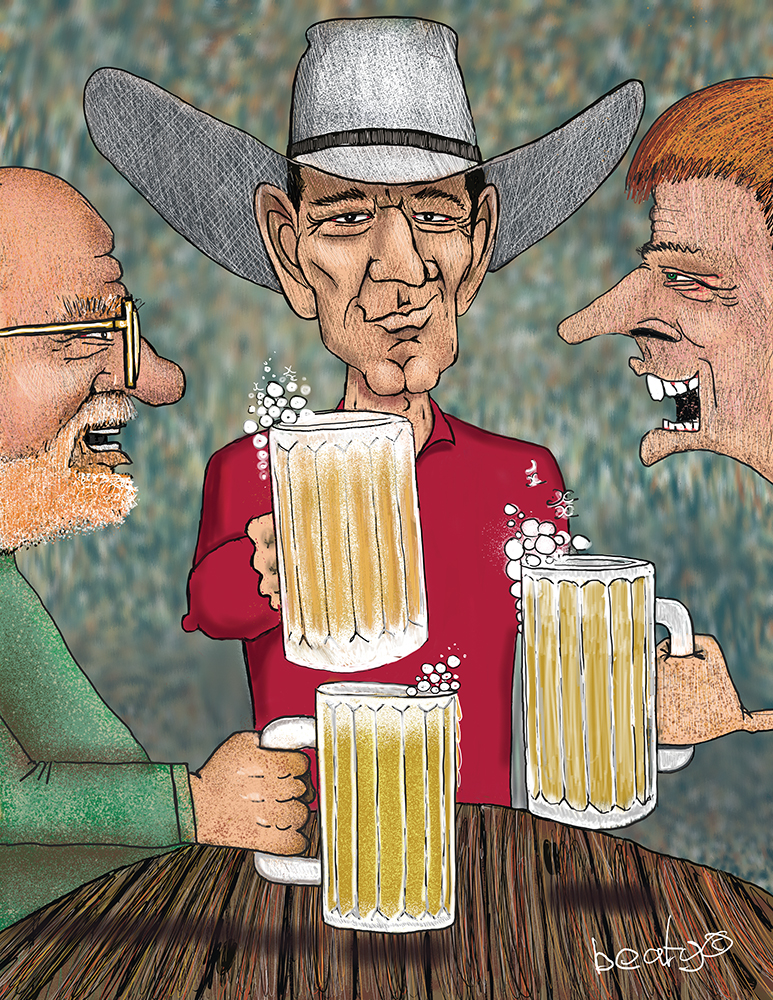 While Red and Tommy had slept through most of the flight from England, Bodie and Pamela remained busy getting to know each other better on the way to Houston.

At the airport, Doug told the boys that he hated to rush off but he and Pamela needed to prepare for a meeting. He’d be in touch as soon as he was able.

Pamela and Bodie got off to themselves for a moment and gave each other a kiss on the cheek that left Bodie emotional as he watched she and Doug drive away.

“I know it, Red, and it sort of scares me,” Bodie replied with a straight face.

Red laughed at that and then turned to see what the commotion behind them was about. Tommy was tugging at a sack that Doug’s chef was doing his best to hold on to. Breaking free and clutching the sack, Tommy came running down the airplane’s stairs and across the tarmac to join them.

“What in the world was that all about?” Bodie asked.

“I loaded up on those big shrimp and I guess he was planning on eating them himself because he tried to grab the bag from me,” Tommy gushed, quite out of breath. “I got ‘em though, and I’m going to eat them on the way home.”

Bodie and Red could only shake their heads in disbelief.

“I’ll see you later Tommy, I have to drop Red off and head out to the ranch. I’ll probably grab a chicken-fried steak and cold beer at Haddon’s this evening. I’ll call you,” Bodie informed his friend.

Bodie arrived home and hurriedly unloaded his gear. Looking around at the plainness of his home he muttered aloud, “Well it’s what I have and she’ll either like it or she won’t. Heck, she may not even want to come down here to see the place.”

Bodie phoned his foreman Monroe and asked him to meet at the main barn to go over recent events and work at the ranch. When Bodie pulled up to the barn Monroe came out to greet him. “So do you still have a Texas accent or do you sound like one of those fancy English butlers on TV?” Monroe kidded him.

“Get your butt to work, Monroe!” Bodie yelled. “How’d that sound?”

“Well, you still sound like the same old Bodie to me. Welcome home boss!”

They shook hands and Bodie handed Monroe a small box. “It ain’t much Monroe but it’s from London.”

Monroe opened the box and removed what looked like a small pocket watch. “It ain’t real gold so don’t worry about me spending too much,” Bodie chuckled.

“The lady that sold it to me said it was more than a hundred years old, and save for a few scratches it’s almost perfect.”

It bore the name Dollond London Pocket Compass on the lid with an inscription inside - May Angels fly with you wherever you roam and guide you back safely to home.

“Well don’t go getting all mushy on me buddy, that inscription is original. I didn’t make it up,” Bodie chuckled.

They covered all the work that had been carried out in Bodie’s absence and what still needed to be done. Monroe asked advice on a backhoe with recurring hydraulic issues and Bodie recommended a mobile mechanic who should be able to fix it. Bodie shared a bit of his London experiences and Monroe told him of a successful fishing trip down to Port Mansfield. Bodie wrapped it up saying he needed to get on over to see Mr. Connors and catch up on a few things.

Mr. Connors answered Bodie’s knock and invited him in. “Well, the world traveler is returned. Tell me, Bodie, how did you find Old London Town, and what about that long flight you were fretting over?”

Bodie told Mr. Connors all about the trip and made sure to include the boys going to the big name gun shops. Mr. Connors laughed when Bodie told him about Tommy wanting to buy an elephant rifle and his reaction to the price tag.

“I warned you about that. I told you you’d see guns you could never afford,” Mr. Connors interjected comically.

“I picked this up for you while I was there, Mr. Connors,” Bodie said, handing a gift sack to his boss. “Doug said it’s really good Scotch. Not knowing good Scotch from bad I took his advice and bought you a bottle.”

The old gentleman rancher and oilman opened the package and pulled out the bottle. “Really good Scotch?” he exclaimed. “Bodie, this is 18 Year Single Malt, and probably one of the best around. You shouldn’t have spent so much.”

“Well, Doug got me a good deal on it; I didn’t have to pay full retail, if that’s any consolation. I hope you enjoy it.”

Bodie and Mr. Connors continued visiting and ended the meeting with a warm handshake, as was their custom. Bodie said he needed to get home and organize a few things after being gone so long and headed to the house.

Bodie arrived home and unpacked what he felt like unpacking and then headed to his boat stall to check on his Tran Sport 24’ SVT. All was well other than a little dust and some seagull poop on the cowling of the big outboard. “Hang in there old girl, I’ll have you in the water soon as I can,” he assured the beautiful rig.

He locked the stall door and drove to Haddon’s, happy to see the place wasn’t too crowded. He wanted to enjoy a couple cold beers and one of Eloisa’s chicken-fried steaks with his friends and relax.

Bodie took a seat at the bar and ordered a cold draft beer. Eloisa came around to give him a proper hug and wanted to know all about England. Bodie told her about the trip and then reached into his pocket and pulled out an object wrapped in tissue paper.

Eloisa removed the wrapping to find a miniature bronze of Big Ben Clock Tower. “How perfect and thoughtful of you,” she exclaimed, placing the souvenir on the shelf next to the big Haddon Cup for all to see.

“Now tell me about those English girls. I know a big handsome cowboy like you had to have hooked up with a few of them,” she asked in a lowered voice with a sly grin and wink.

Before Bodie could say anything Red and Tommy burst through the door offering raucous hellos to everyone and pointing to a table.

“Eloisa, that’ll have to be a story for another time. But trust me when I say that I  only met one girl over there that interested me,” Bodie confided quietly.

“Pffft, I know better than to believe that. I’m sure I can get it out of Tommy for the small price of a chili burger.”

Bodie joined Tommy and Red at the table while Eloisa brought a pitcher of draft and three mugs. Topping off the mugs, Red raised his and proclaimed a toast…“Here’s to being back home in Texas!”

They all took a long sip and Tommy raised his mug again… “And here’s to Bodie and Pamela!”

Eloisa spun around, “Bodie and WHO?”

“I’ll tell you all about it later,” Tommy called to her above the hubbub.

“Oh no you won’t!” Bodie and Red assured him in unison.