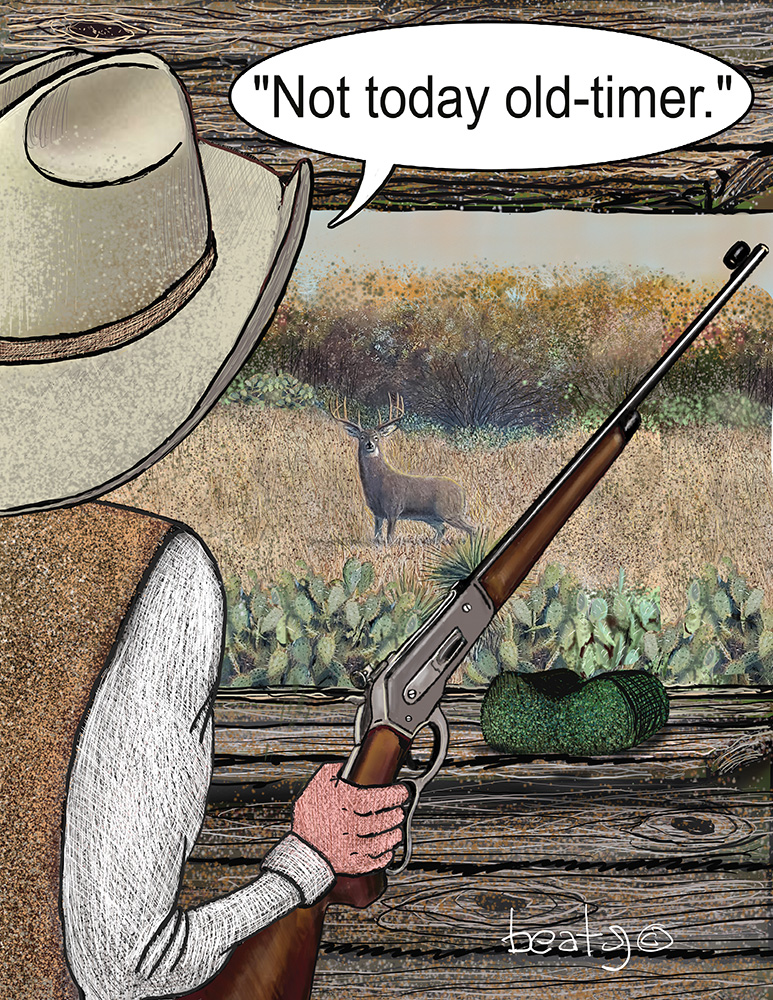 Bodie and Jake were enjoying the cabrito they had grilled over a bank of mesquite embers. Seasoned with only a blend of course ground salt and pepper and a dash of cumin, the meat was tender, juicy and very flavorful. Jake had made some fiery salsa to go with the meal. Bodie had mixed a batch of masa dough and made tortillas. Refried beans that Jake had been simmering all day completed the menu.

“Jake, that’s some mighty fine eating,” Bodie said with a satisfied smile as he wiped his plate clean with a buttered tortilla.

“Well, it’s one of my favorites and I’m sure happy you enjoyed it,” Jake replied, rubbing his full belly.

“I’m going to want your salsa recipe; I believe that’s the best I’ve ever eaten,” Bodie complimented his friend.

“Chili pequins are the secret, Bodie. A few of those with all the usual fresh ingredients, some lime juice and salt is all it takes,” Jake assured him. “I’ll scribble out something before you have to leave tomorrow.”

Bodie was down in South Texas doing some deer hunting on property that Mr. Connor leased from Elpidio Alvarez for winter pasture and the hunting rights came with the grazing. So far he hadn’t seen a buck that was any bigger than the one he had shot the season before and tomorrow morning would be the last hunt for him until the peak of the rut, later in January. “I’ve been down here long enough and I sure am missing the saltwater and the winter trout bite,” Bodie thought aloud.

Bodie was up before the alarm and turned it off to avoid waking Jake. Bodie liked Jake. A hard worker and knowledgeable about both cattle and deer. He kept up with the place and there wasn’t a lazy bone in his body.

Bodie grabbed his rifle and hunting bag and quietly slipped from the cabin and into the ranch’s four wheel drive truck. He smiled as he glanced at the electric winch mounted on the sturdy headache rack. The year before he had killed a huge bodied buck and loaded it by himself. His back complained for several days and so did he to Mr. Connor. Mr. Connor told Bodie to find a good hunting truck and add a winch along with a high rack for hunting out of. “I hope that helps load those deer,” the old gentleman quipped to his top hand.

It was a cold morning and Bodie thought maybe he should have worn his insulated coveralls as he walked the quarter mile to his stand situated on crossroad senderos. He

climbed the stairs to the blind, unlatched the door and ducking his head, stepped inside. He flipped on a battery operated light mounted on the wall next to the door and began readying his gear. He chambered a round into the venerable Winchester Model 71 lever gun that had become his favorite hunting rifle, stood it in a corner, turned out the light and leaned back in the comfortable chair.

Not really sleeping but resting, Bodie would open his eyes every four or five minutes then close them again. When it finally got to where he was just able to see his surroundings he picked up his binoculars and began glassing the brushy countryside.

On his left was a prickly pear flat he knew to be a well-used deer pathway and had seen some nice bucks there during past hunts. The light was still a bit too weak to judge a trophy. Several doe and their yearlings were milling around, waiting on the nearby corn feeder to go off. A bobcat sneaked across the sendero less than fifty yards away. The feeder went off and, like ants to a piece of candy on the ground, deer emerged from all around the clearing.

Turning to the left window and glassing the pear flat, Bodie caught a momentary glint of sunlight. Concentrating on the spot, he sucked in a breath made a barely audible whistling sound. “I’ve seen a lot of big bucks in my lifetime but I ain’t ever seen one that big,” he muttered under his breath.

The buck was out of range for the old lever gun but Bodie kept checking on the buck as he glassed the surrounding brush. “Daddy always said not to stare too long at a big old buck because they can feel it, just like people can,” he reminded himself.

The big buck continued picking his way across the pear flat and the closer he came the more magnificent he appeared. Double drop tines on what Bodie figured was the most perfect 6x6 rack he’d ever seen. The big twelve or fourteen point, counting the drops, was a monarch for sure. “He’s probably seven or eight years old by the looks of him,” Bodie surmised as he carefully lowered the binoculars.

Reaching for his rifle, Bodie slid the window open as quietly as he could and rested it on the windowsill. Now less than 100 yards, even without the glasses, he noticed a white slash that ran from behind the buck’s right ear and down along his neck. That and the enormous rack would make good identifying features.

At seventy-five yards Bodie eased the hammer back on the old Winchester and peered through the Williams peep sight, centering the front post just behind the buck’s

shoulder. Bodie slid his finger onto the trigger just as the old buck stopped abruptly and looked up at the stand Bodie was sitting in.

Evidently satisfied that no danger was present, the buck turned his head toward the feeder and took a step with his right front leg extended. Perfect. Bodie had him dead to rights.

Bodie thumbed the hammer and eased the trigger back to let it rest in the safety position as he continued to watch the buck cautiously approaching the other deer at the feeder. “Nope, not today old-timer,” Bodie uttered under his breath.

The buck sniffed the air curiously, ignoring the scattered corn the others crunched, and vanished into the mesquite as silently as he had appeared. Bodie placed the rifle back in the corner and picked up his binoculars. He waited and watched until just the head of the big buck peaked out from the brush, watching the other deer at the feeder.

A few seconds later the buck again stepped into the clearing, took a nibble of corn, and quickly raised its head, staring straight at the blind where Bodie sat. The buck fed nervously for several minutes, always with its head erect, staring toward the blind as it chewed.

When the deer had all left, Bodie gathered his gear, walked down the stairs without making a single sound and made his way back to the truck. On the drive back to the house he saw an older eight-point, probably a five or six-year-old that needed culling. Bodie made a clean one-shot kill with the big lever gun and proceeded to winch it into the bed of the truck. God, he loved that winch!

Back at the house, Jake and Bodie dragged the buck to the cleaning rack. “Well, it sure is a big fat old eight-pointer,” Jake exclaimed.

Bodie told Jake about the big buck, described it perfectly, and let Jake know it was off-limits to everyone that might come down to hunt the ranch. “I want that one to breed until it dies of old age,” Bodie explained.

“I don’t think I could have let one like that walk away, Bodie.”

“Well Jake, the way I see it, big old bucks like that are just like big old speckled trout. They are the most valuable breeders and they don’t eat nearly as good as the smaller ones. I figure it’s best to let them go if you can to make more fish and, in this case, make more big bucks.

The two made short work of the buck. Bodie gave Jake both backstraps and tenderloins. “I’ll take the rest of this meat and drop it by Prasek’s over towards El Campo. They make some of the best sausage,” Bodie told his friend. “I’ll bring you some links when I come back.”

“You gonna have him add some jalapeno and cheese to that sausage, Bodie?”

“Absolutely, Jake, wouldn’t have it any other way.”

Bodie thought about the trophy buck during the long drive to Prasek’s but never second guessed the decision for letting him walk.

Gazing in the rearview mirror, Bodie winked at himself and said, “Like a big ol’ trophy nine-pound trout…let em swim to make a bunch more babies!”