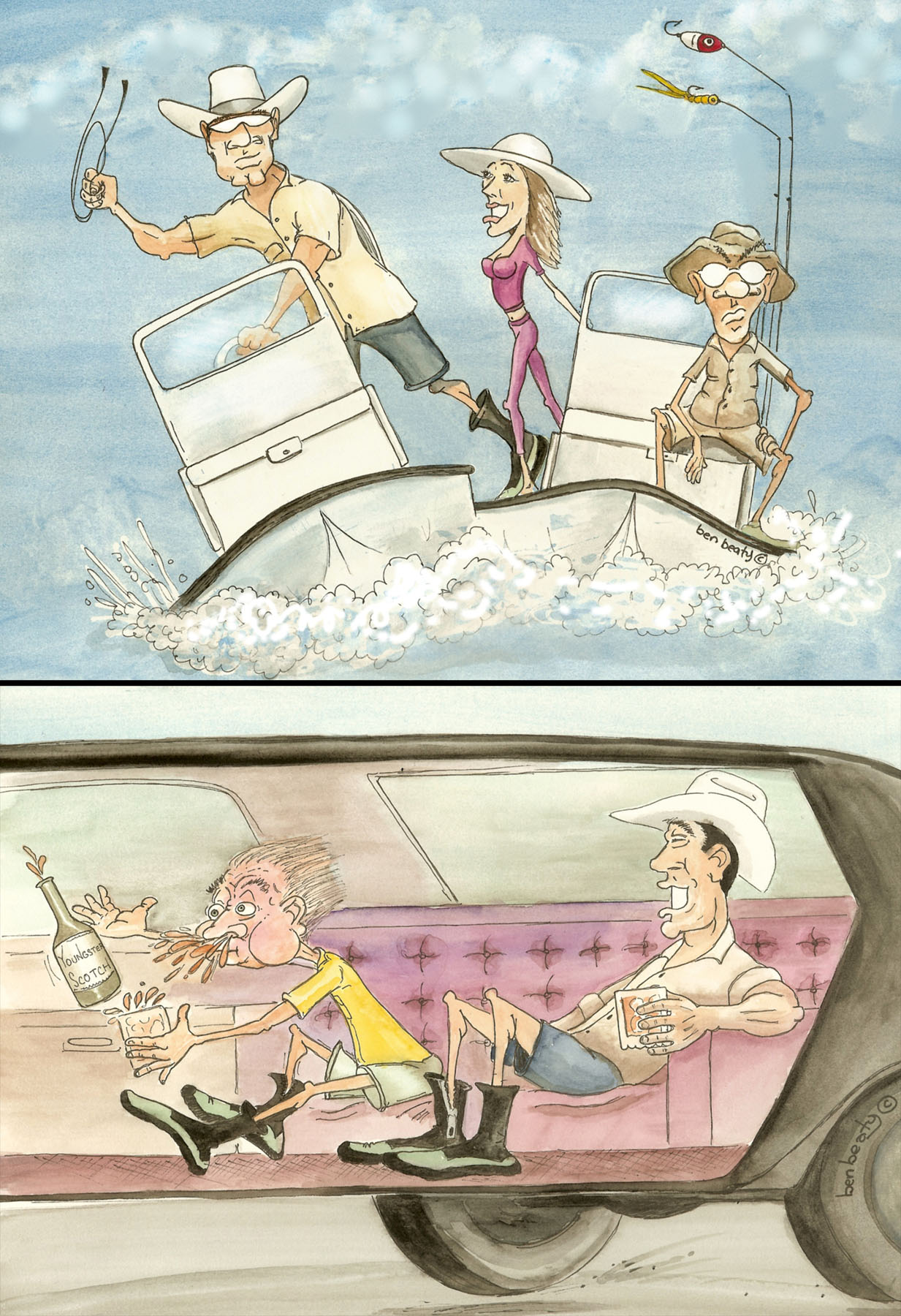 Bodie saw the boat running in circles with no captain at the helm and his eyes quickly scanned the surrounding water for people who may have been thrown overboard. In the wake left by the boat on its last pass, he saw two heads bob up and he pushed the throttle of his own boat all the way forward.

The boat was now coming back in a slightly wider circle and, to Bodie's horror, he saw the two people were swimming in a direction that would allow the boat to intercept and run over them. He changed course and rammed the side of the errant vessel, causing it to veer away from the hapless swimmers. He throttled back and watched as the boat began making a much wider circle and he idled over to pull the folks out of the water. The man and the young lady were already offering 'thank you' as he pulled them onto the deck. But before introductions and before he let them pat him on the back; he barked orders.

"I'm going to pull alongside your boat and I want you to climb in and shut it down, can you manage that?" The man didn't speak; he just nodded his head up and down. Bodie brought his boat up onto plane and in a moment was sliding up against the circling craft. Bodie told the man to go but he froze and looked at Bodie as if he didn't know what to do. With his kill switch lanyard attached, Bodie jumped into the unmanned boat, pulled the throttle back then made a turn to the outside until he was heading back to his own boat, which was sitting dead in the water. Bodie noticed with disgust that the kill switch lanyard of the boat was looped neatly around the throttle and wondered if people will ever learn.

Easing up to his boat he pulled along side and looked into the frightened faces of the man and woman. "What happened?" Bodie asked. The man who at that moment looked like he wanted to be anywhere but right there shrugged his shoulders and looked past Bodie focusing on something only he could see. The girl said, "We were idling along watching some birds working, I lost my balance and fell against the throttle." "The next thing I knew I was in the water and Mr. Fails was swimming to me." "The boat kept coming closer and closer and then you showed up." "Thank you!"

The man looked at Bodie now and said thanks as well and Bodie told them to be careful and looking right into the eyes of Mr. Fails told them to wear their kill switch lanyard when the boat was in gear. He helped them into their boat, reattached the lanyard to the ignition and started his outboard. The girl looked at Bodie and said something about paying him for his trouble but Bodie shook his head, smiled and pushed away from their boat. As he got up on plane he looked back at them and he hoped that Mr. Fails would remember what he had told them. Bodie couldn't help but think to himself that the girl was a looker and that was for sure and certain.

Tommy Meyers was cutting across the bay and he saw Bodie's boat leaving a boat he didn't recognize, so being the nosey fellow that he is, Tommy steered towards the unknown boat. As he pulled up, Tommy noticed the two people were putting on life jackets and asked if everything was all right. "Everything is fine thanks to that good looking cowboy that just left", said the girl. "I sure wish I would have gotten his name." Tommy puffed out his chest and jabbing a thumb in the direction that Bodie had taken said, "Why that's Bodie Allen, the ramrod of the Lazy C ranch and MY best friend!"

The girl smiled at Tommy who immediately turned four shades of red and asked if Tommy knew where she might find Bodie. "Why sure I do. Right now he's probably heading in to put his boat in the sling and then he'll be cleaning his fish, 'cause Bodie always catches fish and then" Tommy stammered but the girl interrupted him and said, "Just tell me where he will be in an hour or so, please?" "Oh that's easy; he'll be at Haddon's Place 'cause that's where ME and Bodie always go after a day of fishing."

The girl and the man said goodbye to Tommy and sped away. As they turned to go the girl blew a kiss just as Tommy was shifting his chew of tobacco from one side of his mouth to the other. Gagging and choking, and without Bodie there to slap him on the back, Tommy flopped around in the bottom of his boat until he swallowed the vile stuff and then peaked over the gunnels to see if anyone had seen his "near death experience."

Tommy was pretty close at predicting where Bodie would be in an hour, and Bodie would have been at Haddon's Place, except he decided to take a shower at the boat barn first. When he pulled up to Haddon's he noticed a large crowd out front and wondered if someone had brought in a bragging sized trout. Tommy Meyers waddled out from the crowd and grabbed Bodie as he was getting out of his truck. "Bodie you won't believe it you won't believe it in a million years I just know you won't believe it", Tommy said. Bodie grabbed Tommy and asked, "Now just what is it that I won't believe Tommy Boy?" "The girl's rich Bodie, I'm telling you she's richer than rich, she's plumb wealthy Bodie!" Tommy said.

Curious now, Bodie made his way through the crowd and saw the stretch limousine idling across Haddon's parking lot. "Now ain't that a sight," said Bodie to no one in particular. Bodie shook his head and started to walk into the bar when a hand grabbed him firmly by the left arm. Bodie turned to look at whoever had him and saw a man in a black suit wearing a funny looking cap. "Partner, Bodie said–unless you're not particularly fond of that hand, I'd suggest you let go of my arm." The man jerked his hand away and apologizing profusely asked, "I'm terribly sorry sir, might you be Mr. Allen?" Bodie squinted at the man and replied, "Mr. Allen was my Daddy but he passed a good number of years ago–I'm Bodie Allen."

"Very good, Mr., ah, Bodie Allen, sir–I'm Bradley Shaw, Mr. Seller's personal chauffer and I was told that you would be here and I was instructed to tell you that you are invited to Mr. Seller's home for dinner." Bodie knew the name Sellers. There was a Douglas Sellers who had just bought twenty thousand acres near the Lazy C and had built one humdinger of a mansion on the place. They ran no cattle and they had no hired hands that Bodie had noticed and Mr. Connor had said that he thought they were going to subdivide the acreage and turn the old ranch into one big mess.

"Would Mr. Sellers be Douglas Sellers?" Bodie asked. "That he would be and he's more than eager to make your acquaintance", said Bradley Shaw. "Well, I'm sorry that you had to wait, but tell Mr. Sellers that Eloisa should have a cold beer sitting next to a big chicken fried steak for me and I would just hate to see that go to waste." "But Mr., I mean, Bodie Allen sir, Mr. Sellers specifically told me to bring you back for dinner so he can thank you for saving his daughter's life," stammered a now flustered Bradley Shaw.

Tommy clawed at Bodie's arm, "Bodie, they're rich, wealthy even, and you done saved a rich girl from getting ran over by a boat and they want to thank you–seems the least you could do would be to go to dinner and take me along to watch your back for you." "I mean they might have some of that Patty fur grass that I've seen them rich folks eat on the TV and we, I mean you, wouldn't want to miss that would you?"

"Mr. Shaw, my friend would like to go with me, but I'm afraid that neither one of us is dressed right for a fancy sit down dinner", said Bodie. "Posh Tosh", said Bradley Shaw, "I can assure you sir that your manner of dress is not important, not important in the least!" Bodie stuck his head into Haddon's and yelled, "Eloisa, keep it warm for me and give my beer to EJ, he looks plumb thirsty–we'll be back before closing."

Tommy Meyers was so busy opening and closing the moon roof on the limo that he almost didn't find the hide-a-way bar. He just happened to hit the release button with his knee and the top of a cabinet opened and crystal decanters of various types of booze rose up from inside just like Lazarus. "Holy Smokes Bodie", Tommy exclaimed. "There's more booze here than there is at Mr. Connor's Christmas parties!" "Can we drink some, can we?"

The partition that separated Bradley Shaw from Bodie and Tommy slid down and Bradley told them to help themselves to a drink. He also told them that they would find the ice and glasses below the bar. "I'll mix the drinks Bodie," Tommy said, and he went about pouring and mixing until he figured that he had them just right and handed one to Bodie. Tommy took a big gulp of his and started sputtering and spitting, gagging and coughing, and luckily Bodie was around this time to slap Tommy on the back an d bring him out of it.

"Don't drink it Bodie, that Bourbon has done ruined," Tommy said. Bodie laughed at Tommy and said, "That's not Bourbon, Tommy, that's Scotch. Judging from the taste and smell, I'd say really expensive Scotch at that." "People PAY for that? That's horrible stuff–I wonder if one of these here jugs has some Jack Daniels in it?" wondered Tommy.

The limo pulled up to a gate and Bradley Shaw rolled down the window and pressed a code into the keypad. The electric gates rolled open and they proceeded down the recently paved road. Bodie could see the sprawling mansion, lit up brighter than an offshore drilling rig.

The limo pulled up in front of a huge flagstone staircase that led up to the biggest doors Bodie had ever seen. They reminded him of the big doors he'd seen at a museum in Houston. Bodie looked at the way the house had been made and thought that the architect had known what he was doing. Everything was built up and it would take a really big storm tide for water to get inside the house. Bradley Shaw opened the door for them and Tommy climbed over Bodie to be the first out of the limo. Bodie followed and the huge front doors of the mansion began to open.