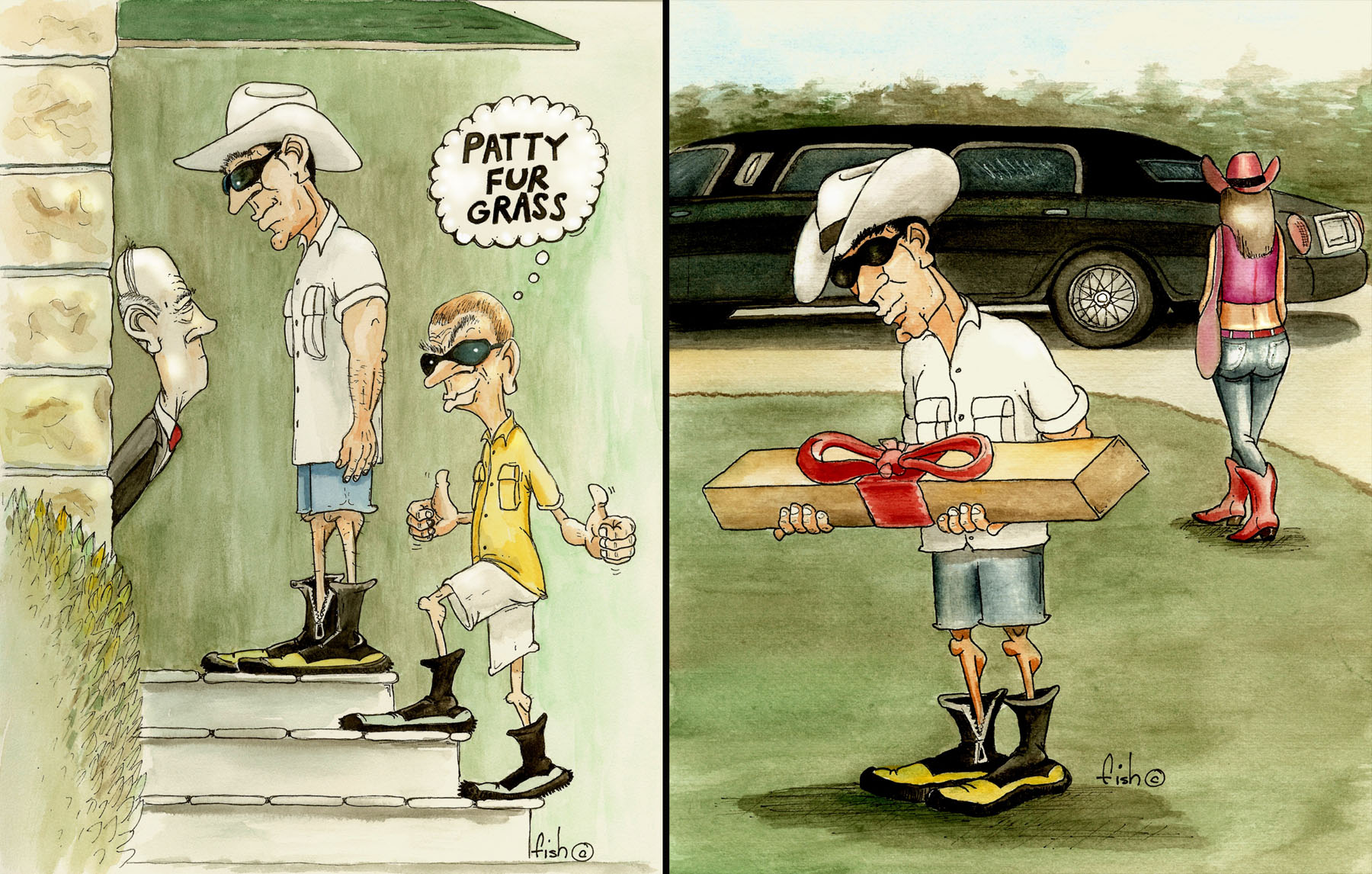 A man appeared in the doorway and Tommy ran up to him saying, "We sure are pleased to make your acquaintance Mr. Sellers...we done heard nothing but good things about you."

The man looked down at Tommy and said, "I'm Aubrey White, sir, Mr. Sellers' personal and private secretary. Mr. Sellers is waiting for you in the study Mr. Allen?"

"Oh heck, where did I leave my manners? I'm Tommy Meyers and this here is my buddy Bodie Allen who done saved Mr. Sellers' daughter," Tommy blurted.

Bodie moved past Tommy and shook hands with Mr. White. "Bodie Allen," was all he said as a way of greeting.

"If you gentlemen will follow me," Aubrey White replied and spun on his heel and started walking down a long hallway.

Tommy was staring at every picture and every statue. While studying a painting that looked like it was made of nothing but dots he tripped over an umbrella stand, spilling canes and umbrellas all over the tiled floor. Bodie picked Tommy up and brushed him off. "Knock it off Tommy," he whispered in a serious tone. Tommy nodded and turned to help Aubrey White pick things up off the floor.

"Aubrey what's all that noise?" a voice called from down the hall.

"The umbrella stand fell over," said Mr. White, "we'll be with you in a moment, Sir."

"Don't worry about that now Aubrey, show our guests in, please," the voice replied.

They rounded the corner into a cavernous room adorned with dozens of trophies from the Dark Continent. Elephants, zebras, Cape buffalo, lions, leopards and some animals Bodie didn't even know existed. The floors were covered with hides of the various animals and ivory tusks were displayed in an exhibit that made up the center of the room.

Next to a huge gun case stood a man who looked like he had been born to wealth. He was dressed in safari clothes that were probably hand-tailored on Bond Street in London. He wore hand-stitched ostrich boots. The watch on his wrist was worth more than Bodie could make in five years as a ranch foreman, but strangely he was missing the snobby countenance Bodie always associated with the rich.

The man smiled and crossed the floor with an outstretched hand, "I'm Douglas Sellers, and I wanted to thank you for saving Alexandria's life today, Mr. Allen."

Bodie felt the man's strong grip and his eyes showed sincerity. "I'm glad that I happened by Mr. Sellers, but I didn't do anything any other man wouldn't have done," Bodie replied.

"Please, let's do away with formalities, call me Doug," Sellers offered warmly.

"Only if you'll call me Bodie," he replied genuinely, still gripping Sellers' hand.

"Done," said Sellers relaxing his grasp, "and who is your friend here?"

Tommy Meyers started forward with his hand stuck out but the toe of his boot caught a zebra skin causing him to stumble forward. Flailing, Tommy caught the only thing he could reach, a huge elephant tusk. Problem was; the tusk wasn't anchored. It was simply leaning with another against a gold double-U shaped brace. Tommy sprawled full-length on the floor, but before the tusk could fall to the tiled surface Bodie stepped in to make the save. Bodie also stepped on Tommy's hand, and of course Tommy began squealing until Bodie gave him the look.

"Well, it seems that damsels in distress aren't the only thing you've saved today Bodie", laughed Sellers. "Shall we have a drink before dinner?"

Bodie was pleased to see Sellers stride toward the massive bar to pour the drinks himself.

"Bradley told me the two of you prefer Bourbon; is that correct?" Sellers asked.

Bodie said that Bourbon would be fine and Tommy mumbled that he could use a double as he rubbed his sore fingers. Bodie had been drawn to the gun case and was admiring a Model 71 Winchester .348 lever gun when his host walked up and handed him a Baccarat crystal glass.

"Ah, the Model 71 is a fine rifle indeed", said Mr. Sellers. Bodie nodded agreement. This one wore its original Williams receiver peep sight; the wood and the bluing were all mint, looking as though the rifle left the factory that very day.

"I have a friend whose Daddy shot a bear with a rifle just like this one", said Bodie. I've always admired this model Winchester but I've never been able to afford it when I found one for sale.

Bodie and Douglas Sellers discussed guns, cattle, ranching, and life on the coast until Tommy butted in and asked if they were ever going to eat. "I sure hope you have some of that patty fur grass I've heard so much about, I betcha it's as good as a mesquite grilled rib eye", said Tommy.

Douglas Sellers stared at Tommy for a moment and then said, "Oh, do you mean petit fois gras, Tommy?" "I'm sure our chef can whip some up for you."

Bodie glared at Tommy but Tommy just shrugged his shoulders and looked at Bodie as if to say, "WHAT?" Then Tommy whispered, "Huh... he's not so hoity toity; he doesn't even know what Patty fur grass is."

It was just about then that the girl Bodie had pulled from the water walked in. She was beautiful and glided along on the skin-covered floor as if moving on greased wheels. "Mr. Allen! I'm so glad that you could make it, thank you so much for what you did today," she said.

"Like I told your daddy Miss, and please call me Bodie, it wasn't anything that anybody else wouldn't have done."

"But it wasn't anyone else Mr. Allen, I'm sorry, Bodie–it was you. And please call me Alex, all my friends do." Bodie could feel his face flushing and was saved from having to reply because at that moment a man entered the room carrying a silver tray and simply announced, "H'orderves."

"Hot dang Bodie, they got whore derves and I betcha they have some of that patty fur grass on that tray." Tommy moved over to the tray and grabbed a few crackers that had meat on them and stuffed them in his mouth.

"I see you found the petit fois gras Tommy, I do hope it's to your liking", said Douglas Sellers. Bodie had seen the look that Tommy had on his face before and he moved as fast as he could. He grabbed Tommy and clamped a big hand over his mouth walking him French doors that opened to a balcony. Reaching the railing, Bodie removed his hand from Tommy's mouth and pieces of cracker and goose liver spewed everywhere. Oh and yes, Bodie was slapping Tommy on his back to keep him from choking to death.

"Good Lord, I hope that there is nothing wrong with the petit fois gras," said Douglas Sellers.

"No sir, nothing wrong with that, just went down the wrong pipe I guess," said Bodie. Tommy tried to say something but Bodie whacked him on the back again and no words came out of his mouth, just more goose liver and crackers.

Fully recovered, Tommy approached Bodie and whispered, "Bodie these rich folks drink and eat some of the nastiest stuff I ever tasted in my life."

Bodie told Tommy to go back to the tray and get something without the brown pudding-looking stuff on it and he'd be okay. Tommy walked to the tray and was looking at the various choices when Alexandria Sellers reached for one herself.

"Say, that's not patty fur grass, is it," asked Tommy?

"Oh no Tommy, I can't stand petit fois gras, this is beluga caviar and it's simply delicious, you will love it." Tommy was hungry so he grabbed three of the crackers and stuffed them in his mouth. Bodie noticed Tommy running for the balcony, cracker crumbs falling from his mouth and he walked out to see what the problem was this time. "I told you not to eat anything that was brown and smooth looking Tommy." Tommy was gagging and snorting and spitting crumbs and caviar out of his mouth and told Bodie, "Wasn't brown and smooth, it was like little balls and it tastes like rotten fish Bodie." Bodie laughed and told Tommy to wait for dinner, but Tommy told Bodie, "Bodie, I'm sick, that last batch of whore derves did me in. I can't eat dinner, take me back to Haddon's Bodie, I've got to have a beer and a cheeseburger or else I'll die", said Tommy.

Bodie hated to do it, but Tommy was pretty green around the gills. He apologized to Douglas Sellers and his daughter but told them that Tommy had picked up a stomach bug and that he sure didn't want them to get it so he'd best get Tommy back to the house. Though disappointed, Alexandria and Douglas Sellers both understood, but made Bodie promise that he would return, perhaps without his "friend" for another try at dinner. Bodie promised them he would but in his heart he knew that he probably wouldn't and Mr. Sellers called for Bradley Shaw to take them back to town.

Bradley had to stop the limo three times between the Sellers spread and town to let Tommy puke but other than that the drive back was uneventful. Haddon's was still open and Bodie dragged Tommy inside, bought him a beer and ordered him a cheeseburger and asked Eloisa to heat his chicken fried steak up for him.

The next morning Bodie was lining out the fencing crews and the windmill hands when a long black limousine pulled through the gate and drove up to the foreman's house. Alexandria Sellers dressed up like a cowgirl in clothes and boots that came probably came from Rodeo Drive bounced out of the rear door before Bradley Shaw could open it. She carried a long box that was neatly wrapped and had a large red bow on it. "Bodie, this is from Daddy. He wanted me to deliver it personally and to remind that you promised to come to dinner soon."

Bodie took the box, which he noted immediately was heavy for its size. Alexandria told him to open it later, when he had more time. Bodie nodded and told her to thank her Daddy for him. Bodie mentioned that he hadn't seen her companion since the incident on the bay.

Bodie nodded and hoped that Mr. Fails was better at whatever he would be doing now than he was at running a boat.

Bodie watched as Alexandria walked to the limo and then turned to face his crews who had watched the entire scene, their mouths still open. "Sure is a pretty package you got there Bodie," said Jake the crew leader with a grin on his face.

"Shut up and get your butts back to work," Bodie growled with a wry smile.

Bodie took the package inside his home and placed it on the kitchen table. He opened the card that was attached and read, "From one hunter to another, I hope you do me the honor of visiting my home again soon." It was signed- Douglas Sellers.

Bodie slit the plain wrapping paper with his Case pocketknife and then carefully opened the cardboard box that it covered. Inside, wrapped in a silicone rifle sock, was the pristine Model 71 Winchester he had admired the evening before.

"Douglas Sellers doesn't play fair," said Bodie to himself. "I wonder if he can fish."