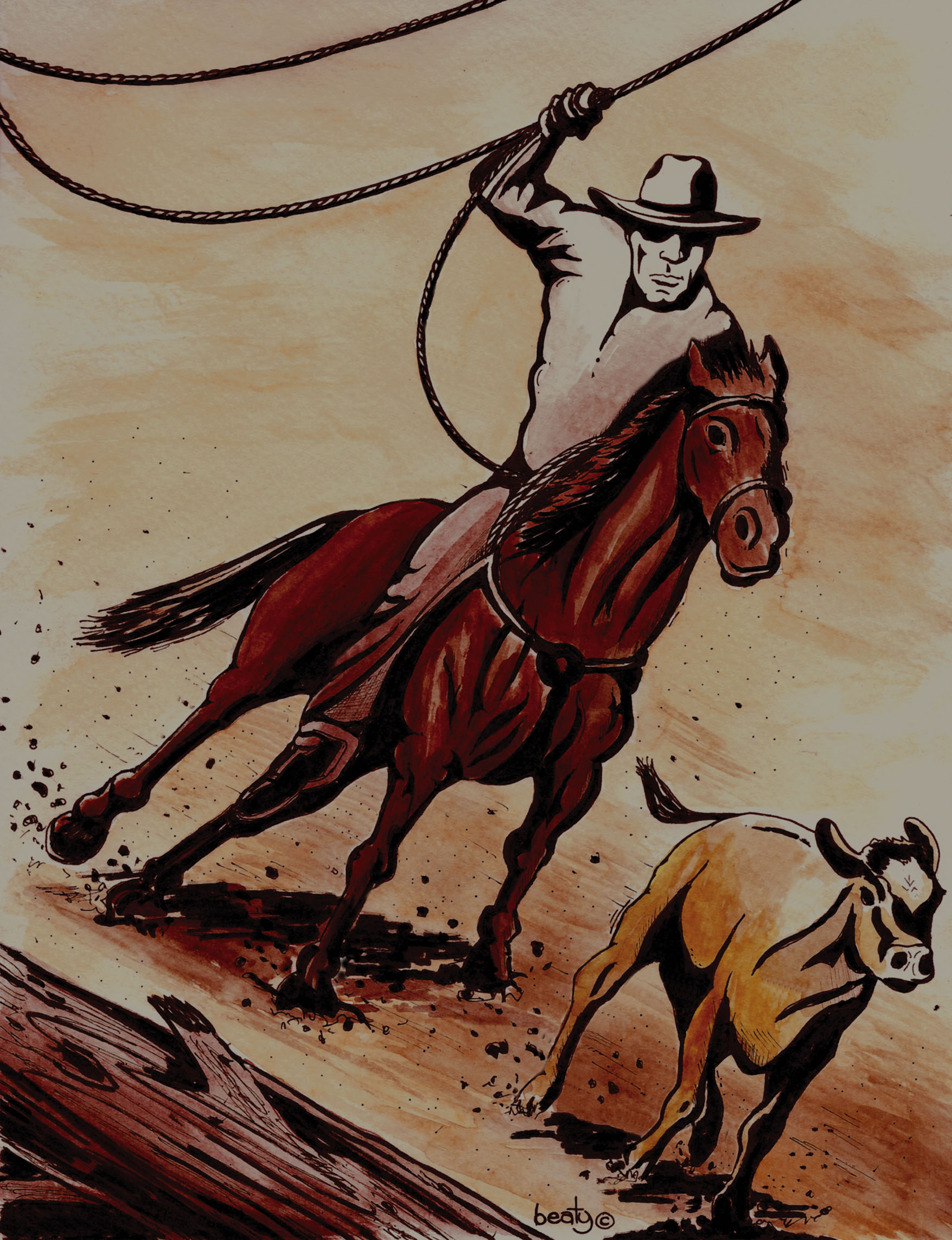 Bodie was nearly finished cleaning a well-used Shimano when his cell phone rang. Not recognizing the caller ID he let it go to message. A few moments later the message alarm sounded. Wiping his hands he decided he'd better see who called.

Bodie's suntanned face frowned as he hit delete. Stretching his tall and muscular frame he drew the stainless revolver that rested on his hip and flipped the cylinder open of habit, already knowing it was ready. Leaving the reel project, he grabbed his Stetson and stepped onto the porch.

Closing the truck door he glanced at his watch. "Thirty minutes," he spoke to himself. Plenty of time to think things through, all the while praying the situation would not require using the Smith & Wesson.

The day had started well. He and old Captain Red had made a first-light run to the Pringle shoreline and found some decent trout on thigh-deep grass. They picked up self-imposed five fish limits with Ol' Red adding a fat bonus flounder. Bodie had teased that if he didn't fish so slowly he wouldn't have to mess with those flatfish and Red laughed.

"You know Bodie, speaking of slowing down, I told that danged Yankee carpetbagger if he could learn to slow down he might catch a flounder now and then," Red said.
"You're dreaming Red, he's a mile-a-minute, you'll never change him," Bodie snickered.

Now that the wind had come up Bodie dreaded the ride across the bay in Red's boat. Actually, boat didn't quite apply, "surfboard with a big motor" was his pet description. He did have to admit it ran as shallow as a shorebird and was easy to get in and out of, although Red would never hear him say it.

Running Lighthouse Cove and Big Pocket to avoid the open bay, Bodie spied gulls hovering and pointed them out to Red. Shutting down, they took a minute to check it out. A moment later Bodie said, "Looks like a school of reds tearin' it upmust have a bunch of bait corralled in there...look at 'em."

"We got 'em now," Red cried, cranking the outboard and jumping on plane to make a wide circle. Bodie could tell this wasn't the Old Reprobate's first rodeo as the boat drifted on a line that would take them within easy casting distance.

Bodie fired a MirrOlure Top Pup to the right as Red's go-to gold spoon sailed left. "Glad to see you working the edge," Red giggled with a wink, knowing full well Bodie would never cast into the middle of the action.

The strikes came instantly and both men leaned into their rods, hoping to fight the reds away from the school and prevent a scatter. That's when they saw the boat planning straight at them the driver seemingly oblivious to them and the still-feeding school.

Waving his cap and whooping like an Apache, Tommy Meyers was on a beeline.

"He's a damned fool Bodie and for the life of me I don't know why you tolerate him," Red snarled.

"He makes me laugh, Red. And besides, he needs someone to keep him out of trouble now and then," Bodie replied.

Red and Bodie tried waving him off. Tommy simply waved back, plowing right into the middle of the school. Still fighting fish, Bodie and Red feared being rammed until Tommy finally jerked the throttle and spun the steering wheel.

"Hey, ya'll catching anything? Man, did y'all see all the bait I just ran through?" Tommy squealed.

"Ignorant freak of nature," Red mumbled under his breath and Bodie shot him a hard look. Bodie netted both fish and, releasing Red's oversized brute, slipped his own into the cooler.

"Man, y'all catch those right here, in all this boat noise and hollering and stuff?" Tommy asked in disbelief.

Red had already turned his signature crimson and was about to bust when Bodie cut him off.

"That was a really nice school of reds you just ran through, Tommy," Bodie offered, very restrained.

"Oh man, I'm sorry. Y'all should have waved me off or something. I would have gone around," Tommy explained sheepishly.

"I'm going to have to shoot him Bodie. So help me I don't think any jury would convict me," Red whispered.

"Not even just a little, like maybe in the knee or something?" Red pleaded.

"Where are you headed Tommy Boy," Bodie asked.

"Well I was heading over to Lighthouse Cove but I saw you guys and thought I'd come over and see if ya'll were doing any good, maybe bum a couple beers. I forgot to pick some up before I left," Tommy replied.

"Okay, you can shoot him now," Bodie sighed placing his rod in a holder. "But just a little."

Bodie drove to the south pasture to check the windmill after Red dropped him off. He spoke with his pasture manager going over details. Mr. Connor would return from Amarillo soon and he wanted everything in top shape. Turning into the horse pasture he noticed one of the older but better cutting horses was down. Moonshine, Bodie's favorite, had put on weight over the wet months and just yesterday looked and acted fine. Now though, he had a yellow discharge from his nostrils, felt fevered, and was not breathing well.

Now Bodie knows a few things about doctoring horses. Rumor has it that he had worked for a vet out near Uvalde and hoped to attend vet school, but that's all anyone knew. Any time someone brought it up Bodie gave a look that made them change the subject.

Bodie told Monroe, his pasture foreman, to stay with the horse and move him into a stall if he got up while Bodie went for his doctoring kit. When he got back Monroe had the horse in a stall with a sling to keep him up.
"He looks bad Boss, " Monroe said.

Bodie didn't answer, went quickly to work administering an injection of Amoxicillin, then took a seat with Monroe. Bodie phoned Doc Young at his clinic and filled him in on the symptoms and the injection. Doc said he would be by in about an hour. Bodie paced nervously then sat back down with Monroe to watch and wait.

The old doc examined the horse and pulling the stethoscope from his ears grimly informed Bodie that Moonshine might be on his last legs. He told Bodie he would hang around for an hour or so and call if there was any change. Monroe stayed too to tidy the barn and other things while Bodie headed to the house.

It was Doc's call and message Bodie had received while cleaning reels. "No improvement yet, may even be worse," Doc's message drawled. "You should come for a look, might be decision time."

Bodie pulled up to the barn and Monroe and Doc met him outside. "He looks bad Boss," Monroe said again. Bodie nodded and looked to Doc Young.

"It's really up to you Bodie, he's very weak. I doubt he'll make it until morning," was Doc's assessment.

"I didn't recognize your cell phone number Doc," was all Bodie said.

"I'm sorry Bodie. I just got a new number and haven't had a chance to give it out yet," Doc replied.

Entering the barn Bodie could hear the big gelding struggling for breath. Slipping his arm affectionately around Moonshine's neck he whispered how much he appreciated the many miles they'd made together gathering cows and cutting yearlings off their mommas. He smoothed Moonshine's mane, thanking him for being such a fine companion.

Monroe and Doc jumped at shot and in a second Bodie was back outside. "Monroe, I reckon you better fetch the backhoe," Bodie said weakly.

Bodie stopped by Haddon's for a cold beer as Captain Red pulled up on his golf cart. "Heard about your horse, sure am sorry to hear that," Red greeted.

"Appreciate it Red, buy you a beer?" Bodie asked.

"I'll take you up on that but only if I can buy the second," Red quipped with a smile.

Word travels fast in small towns and it seemed everyone had kind words to offer. Tommy Meyers had tears in his eyes as he ordered three beers, although Red would end up paying for them.

A new acquaintance of the Haddon regulars asked Bodie if Moonshine had been a good horse.

"Good enough to ride the river," Bodie said with a smile, pointing to a faded snapshot behind the bar of him and Moonshine gathering cows in the river bottom.

Everyone nodded and smiled.