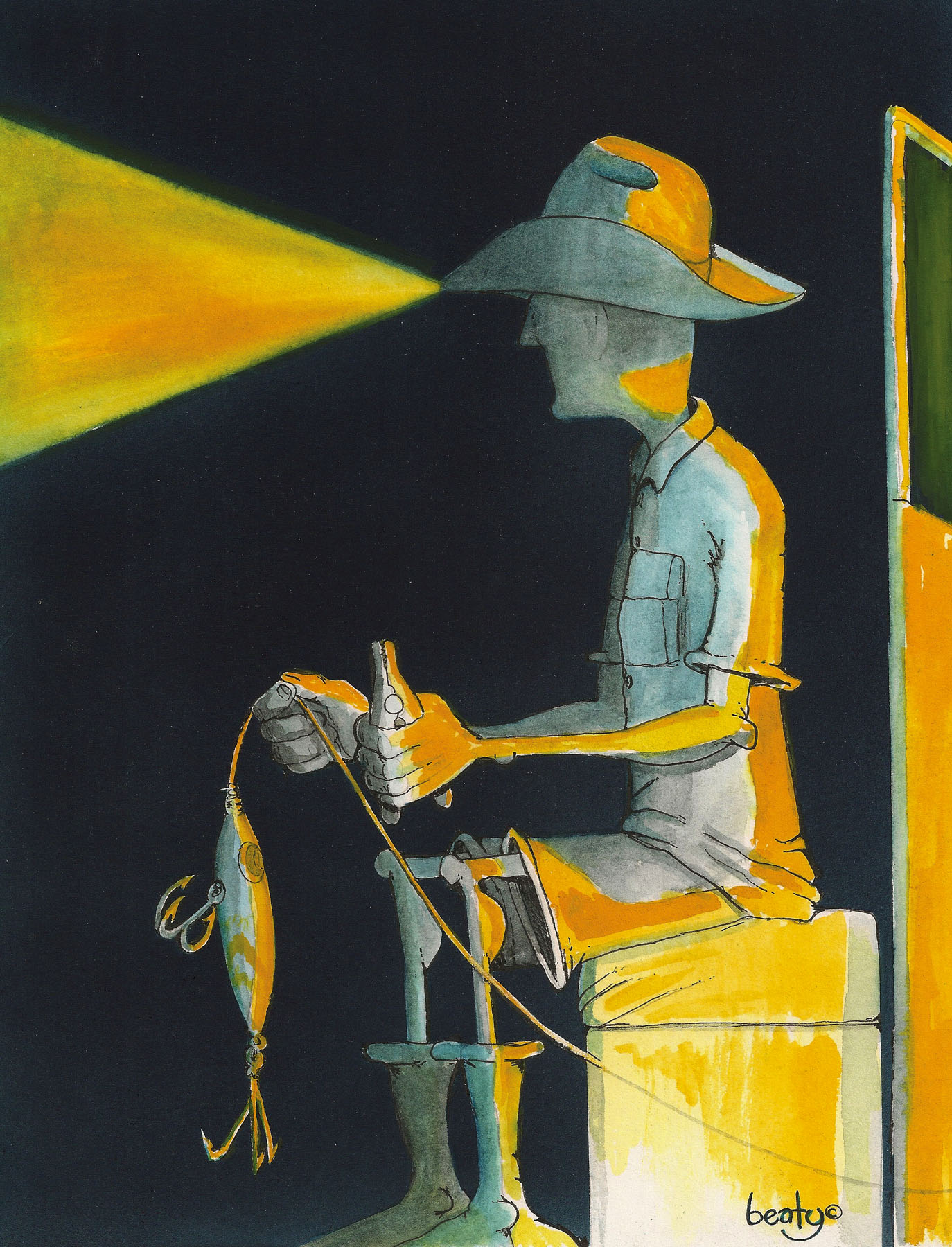 Bodie took advantage of what promised to be a slow moving incoming tide and left the dock at one in the morning. "And another good thing about this new SVT, is that there's plenty of room in it to sleep when I want to," Bodie said to himself.

Running by instinct, GPS and the help of a large powerful spotlight, Bodie steered the big shallow running boat through a narrow channel that was full of twists and turns but that was protected from the wind and would cut off more than a few miles that would have taken him across open water. Not that the wind was an issue this morning, and in fact he was hoping that it might blow just a little as the bay was as slick as a stock pond in August. But since he was going to be fishing an incoming tide and would be casting against the wind he wasn't going to complain about it.

The previous evening Bodie had been at Haddon's Place and had invited Red and Tommy, hoping they might want to do a night trip with him, but Red had to be somewhere early in the morning and Tommy just doesn't care much for the darkmuch less being on the water in the dark.

"I still remember the cold water sharks Bodie, and them rustlers too," Tommy wailed. "Ain't nothing good can come from being out on the water at night unless you're gigging flounder and then only within sight of houses and people and stuff," he added.

Red snorted and made a comment about Tommy's manhood and Tommy wanted to show Red that he wasn't scared but was worried that if he said anything he'd have to go with Bodie, so he let it go.

"You two need to stop that silly bickering," Bodie sighed.

"Heck, if I stopped giving Tommy a hard time then what would I have to do for fun besides fishing?" Red asked.

Both Bodie and Red just turned and stared at him as Tommy suddenly became more interested in finishing his cheeseburger.

"Where are you thinking about going tonight Bodie?" Red asked.

"I'm thinking about hitting the flats about a mile inside the pass, Red. I'm thinking that if I work the gut that runs along the shoreline and then curves out towards the middle of the flat I'll pick up some nice fish on the incoming tide." Bodie told him.

Red nodded, looked at his watch and told Bodie to be careful out there in the dark. Bodie said that he would then before he could say anything else Red said, "I think you should just hog tie Tommy, toss him into your boat and make him go with you."

Tommy was just swallowing the last bite of cheeseburger on Red's remark, and of course it went down the wrong pipe and he started gagging and coughing. Bodie had to slap him on the back to get him breathing again.

Bodie just looked at Red, rolled his eyes and headed for the door.

"You watch out for them cold water sharks and rustlers Bodie!" Tommy yelled as Bodie went out the door.

"Dang it Red you dang near made me choke to death!"Tommy protested.

"Yeah, if Bodie hadn't been here you'd have been crab bait by now," Red chuckled with a grin as he too headed for the door. Tommy just glared at him as he left.

Bodie swept the light across the flat looking for a small white PVC pole that would mark where he wanted to anchor up. He hadn't yet been able to put this location into his new GPS and the pole was hard to see in the daylight, much less in the dark.

He spotted the pole and idled up to it, set the Power Pole and then punched some buttons on the GPS. He then took his anchor, stepped out of the boat and pulled the bow tight towards the light southeast wind and set the anchor in the hard sand.

"I like the Power Pole, it's a handy gadget to have but I guess I'm just old school and like my bow pointed into the wind when I'm not in the boat," Bodie said out loud.

Back in the boat Bodie pulled a rod and reel from a rocket launcher and with the light from the LED's that were all over the boat he tied on a black and red MirrOlure She-Dog.

"Loud and obnoxious is what I'm after tonight and this lure is sure enough both of those," he thought.

Bodie had done some painting on this lure, adding diagonal yellow stripes to each side near the tail. What the fish thought it was he had no idea but he knew that they liked it.

Once out of the boat, Bodie uncoiled his stringer and let it fall into the water. He watched to see how fast the float moved with the tide and it moved rapidly into the darkness. Standing still, Bodie could feel the current moving his pant leg and he smiled to himself. He heard a school of bait fish escaping something with teeth and he thought it was nice of them to let him know where they were. Shuffling across the hard sand he moved into casting distance where he could cast south and up the gut and work the lure back with the current.

Bodie cast down the gut and a little to his left and he listened with his thumb on the spool to stop his line when the lure landed. He heard the splash, thumbed the line and just let the lure sit. After a ten count he walked the lure back to him with four twitches of his rod tip then he let the lure sit. He did this twice more and heard the explosion before he felt the fish then set the hooks by bringing the rod up to the twelve o'clock position. The fish took some drag running towards the shoreline then changed directions and started across the flat. The fish was stirring up the phosphorescence in the water and Bodie almost wished that he had one of those video cameras that he could wear on his head to record it. Then he thought that he wouldn't be caught dead wearing one of those things, someone might see him and he'd never live it down. The trout tired and after turning on his head lamp Bodie grabbed it and lifted it up. "I'll take about four more just like you" Bodie said to the trout as he slipped it onto his stringer.

After checking his knot Bodie turned his head lamp off and made another cast working it back the same way that he had before but didn't get a hit so he cast further out onto the flat and moved a bit closer to the gut. This time he didn't get a chance to work the bait and he didn't hear the water explode but he did feel the fish when it hit. Line sped off of his reel against his lightly set drag so he tightened it just a bit. "Jackfish" he said aloud.

Feeling with his thumb in the darkness he figured he had a little less than a half-spool remaining, and with this he tightened the drag. The fight then became a matter of him holding pressure and the fish doing the same thing. Then, almost as sudden as the strike, his line went slack and he reeled in his lure. Turning on his head lamp he looked at the lure and saw that two of the points on the treble hook had bent. "Yup, jackfish or a really big bull red," he muttered.

Not being far from the boat and without another hand-painted She Dog, Bodie waded back to his boat to replace the bent hook. As he was sitting on the leaning post trying to get the split ring opened he heard the distant sound of high-speed props out across the barrier island in the Gulf. He looked for running lights but saw none and he couldn't see a boat as dark as it was.

Bodie turned off his cap light and all the lights in the boat and sat listening. The boat stopped and then he heard the low rumble of diesel engines, but again, there were no running lights. In just a few minutes the high-speed props took off again. The boat had to have gone past the pass and was heading up the coast and as he listened the boat finally got out of range of his hearing.

But Bodie could hear the diesels churning their way south down the coast. "Strange those two boats would be in the same place in the gulf with neither having their running lights on," he thought. "But then if a man didn't want to be seen unloading or loading something, he wouldn't have his lights on," he said in a low tone, as if to avoid being heard.

Bodie used his cell phone to call the Coast Guard and found a Chief Petty Officer he knew working the night watch.

"Chief, did you get demoted or maybe you just couldn't sleep?" Bodie offered with a chuckle.

"I recognize that voicesome old cowboy who thinks he can fish. How're you doing Bodie?" the Chief asked.

"Well I'm out here near the pass trying to fool some fish and thought I'd let you guys know that a couple of boats were out in the gulf with no lights and they definitely spent a little time with each other out there," he explained.

"Thanks Bodie, we'll look into it but I think you've probably already figured out what they were doing," the Chief replied. "I'll do some checking and get back to you if I can sniff anything out."

Bodie finally got a new hook on his She Dog and again made his way toward the gut. He made a cast and another hungry trout nailed it after just a few twitches of his rod. He strung his fifth trout and one red before he thought he should head in.

After washing his boat and gear Bodie decided to pay a visit at the Coast Guard station on his way home and visit with his friend CPO Timothy Long... those Coasties always have a fresh pot ready, hot and strong the way I like it, Bodie mused to himself.