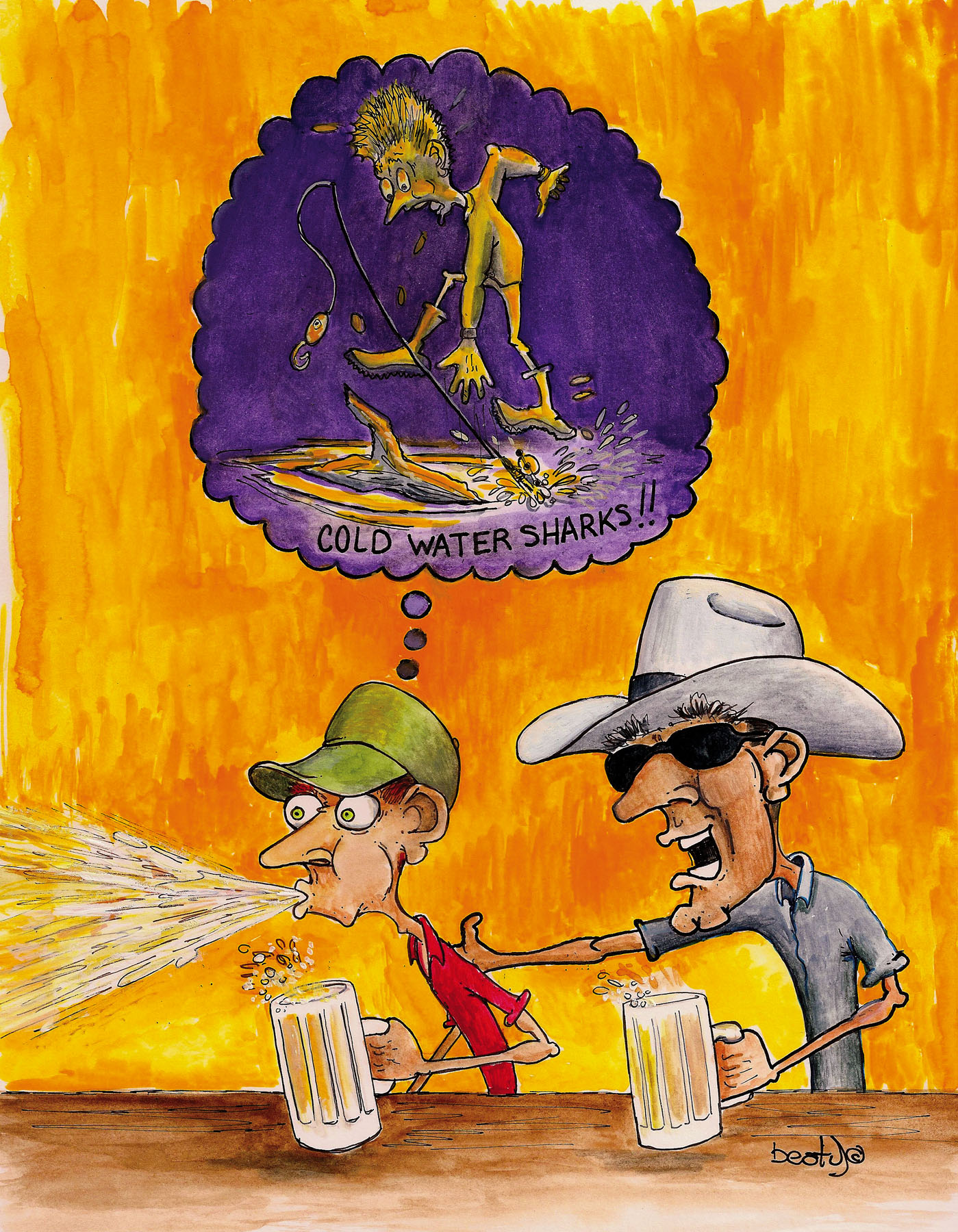 Bodie pulled up to the Coast Guard station and gave the guard his ID.

"Came by to visit with Chief Long," Bodie announced.

"You'll find the Chief in the mess room, sir" the guard replied and gave Bodie directions.

"Been there before but I appreciate it all the same" said Bodie.

Chief Long wasn't surprised to see Bodie. "I thought you might stop by for some coffeedon't you ever work?" the Chief asked.

"Don't you ever wash these cups" Bodie asked.

They laughed at that, shook hands, then sat down at a table where the Chief had a plate of eggs, potatoes and bacon. "Hang on just a minute and I'll have Toliver bring you some breakfast Bodie" the Chief said.

The two old friends sat and visited while the Chief ate until Petty Officer 3rd Class Toliver brought Bodie his breakfast. "So tell me about what you saw this morning, Bodie" the Chief said.

"Just what I said on the phone, ChiefI didn't really see anything, but I heard the boats and could picture in my mind what was going on" Bodie replied.

"It's a problem all along the coast, unfortunately" said the Chief. Chief Long detailed to Bodie what he could about what he knew of the smuggling going on along the Texas coast.

"The cartels use the waterways to move their drugs and human cargo into the country, and even with the P3 aircraft and US vessels on the watch some of it slips through. It starts in the Caribbean and it moves up this way through the bays and ICW and of course across the Gulf of Mexico" the Chief told Bodie.

"It seems somebody is always reporting bales of marijuana or cocaine on the beaches of San Jose and Matagorda Island. Boats get caught in rough water and sink or the contraband is tossed overboard when pursued, whatever the case may be, and it washes up on our shorelines" Chief Long said with a frown."As long as there is money to be made they'll keep sending it our way and all of the government agencies working on controlling the flow, and I say working on controlling because I don't see a way of really stopping it, but we are doing the best we can" said the Chief.

Bodie and Chief Long visited for a while longer then Bodie thanked him for the coffee, breakfast and the information and told the Chief that he had to head out to the ranch. "Glad to have you Bodie, drop by anytime but keep in mind that the smugglers moving this stuff are armed and buddy when I say armed I mean just as good as we arewatch your six when you're out there at night" warned the Chief.

Bodie dropped by his house and took a thirty minute nap then drove out to the ranch to make sure Monroe had everyone working on the projects that Bodie had given them the day before. "Man I'm getting too old to fish all night then work the next day" Bodie said out loud to himself.

Monroe had everything under control so Bodie spent the better part of the day ordering feed and checking on four different fencing crews working at various pastures on the ranch.

Bodie was dragging when he dropped by Haddon's Place on the way home for a cold beer and something to eat. Eloisa put a beer on the bar before he could sit down and said "Maybe I should change that beer to coffee because man you look worn out."

Bodie smiled and told Eloisa that he didn't want coffee because he needed to sleep then explained to her why he was so tired and ordered a chicken fried steak.

Tommy came in as Bodie was ordering a second beer and he had Eloisa pour one for him as well. "Did you catch any fish last night Bodie" Tommy asked.

"Got five nice trout and a red Tommy; you should have gone with methere were plenty there and I left them biting" said Bodie.

Tommy noticed how tired Bodie was and he figured that he wouldn't be going out again tonight so he said, "Well I can go tonight if you want Bodie, I ain't scared much at all about night wade fishing."

"As soon as I down the steak I just ordered I'm going to the house and pile up till morning" Bodie said.

Tommy said that was a shame because he really wanted to go. When Bodie said he would be welcome the following night Tommy choked and spit beer all over the place. Of course Bodie slapped him on the back so his friend could breathe again.

Tommy caught a couple good breaths and said "But you have to go down south tomorrow don't you Bodie, did you forget?"

"No that's all cancelled until next week so I'll just meet you at the boat stall at about 8:00 tomorrow night and we'll be on our spot just when the tide starts to move really well" Bodie said with a grin.

Tommy was instantly sick, lost his appetite and was overcome by a dizzy spelllike always. The last thing he wanted was to be out near the pass in the dark with daylight so far from happening, and on top of that in the water where something could eat him or someone could get him. Before he could think up a good excuse Bodie had finished eating, said good night, and was making for the door.

Tommy ordered another beer and sat nursing it, trying to think of something that could get him out of going with Bodie the following night. Just about when he had given up, Wehman came in and sat down next to him. Now Tommy had known Wehman since they were kids and he was a pretty good friend, one of the few that would put up with Tommy's shenanigans.

"Dang Tommy you look like you just lost your favorite rod and reel" Wehman said as he ordered a beer from Eloisa.

"It's terrible Wehman, just terrible" cried Tommy. "I have to go fishing with Bodie tomorrow night in the dark and way out near the pass."

Wehman just snickered and said that he couldn't figure out what the big deal was about fishing at night then ordered a cheese burger and fries.

"What's the big deal you ask me? Well I'll tell you what the big deal is" and Tommy went on to explain the few times that he'd been fishing with Bodie at night.

"The first time we went floundering and we ran into a bunch of rustlers stealing Mr. Connor's cattle and I got knocked out" explained Tommy. "The second time I was almost eaten by cold water sharks and you know how nasty and vicious those things are, Wehman" Tommy cried.

"Well if you don't want to go just tell Bodie that you can't go and I'm sure that he'll understand" replied Wehman.

Tommy told Wehman that he'd have to come up with a really good reasonbetter than just being scared of the dark.

So Tommy sat and worried and Wehman sat and thought as he sipped on his beer and then he got a great idea.

"I've got it" yelled Wehman. "You say that you ran into rustlers and sharks when you went with Bodie so just tell him that you went with me tonight and that we ran into pirates or something" Wehman said with a smile.

They sat and ordered another round of beer and while they drank they thought some more. "I've got it again" yelled Wehman. "It wasn't pirates that got us it was smugglers that got after us. They shot at us and we barely got away with our lives" Wehman said with a triumphant smile.

"Oh you're good Wehman" Tommy giggled in glee. "Heck there's no one to say that there might not be a smuggler or two or three around these parts. I mean anything is possible and we can make the story really good so he'd be sure to let me off the hook for going night fishing with him" Tommy said while beer dripped down his chin.

"Well not me buddy because I'm off to San Antone tomorrow and I won't be back for a week. But you can use my name and you can pull this off with no problem" Wehman told his friend.

After Wehman left Haddon's Tommy went home and made up his story. He wrote everything down and practiced it. If he had to say so himself, it sounded absolutely terrifying. Tommy fell asleep with a smile on his face.

"Probably a worn seal on the pump" remarked Monroe.

"I hope it's something else Monroe because I really don't want to have to pull it to find out" Bodie replied.

Sure enough the windmill was running just fine but no water was flowing into the cement tank.

"Well, I'll call Henry and get him to send a crew out here in the morning to pull it and repair or replace the pump Monroe, but I want you here to make sure that it gets fixed if it is repairable. Don't let him drop a new one in there if it isn't necessary" Bodie said with a scowl.

Monroe said that he understood and that he would meet the crew if Bodie would let him know what time they'd be there. The two of them checked a few other locations to make sure that the water was flowing and then they headed back to the ranch headquarters to meet Mr. Connor and discuss plans for a new bunk house and new working pens that needed to be built at a ranch Mr. Connor was leasing down south.

Bodie was impressed with the plans for the bunk house. It had private foreman's quarters and all the comforts of home. Since hands would be down here from November until the end of March and in a remote location, Mr. Connor wanted them to be comfortable and happy. The house had a fireplace and nice kitchen with built in bunks and two large bathrooms with showers. That was something that Bodie had long admired about his boss and friend. His motto was that if the men were comfortable and happy when they were resting, they would be happy when they were working, and Bodie agreed.

Bodie had already picked a spot for the bunk house on a previous visit and offered to make the long drive south to get the construction crews started but Mr. Connor said his old friend and landlord Elpidio Alvarez was going to take care of that. "He's supplying the labor and we're splitting the costs. And besides, that will keep you here where I really need you right now Bodie" said Mr. Connor.

"I'm sure okay with that" Bodie replied.