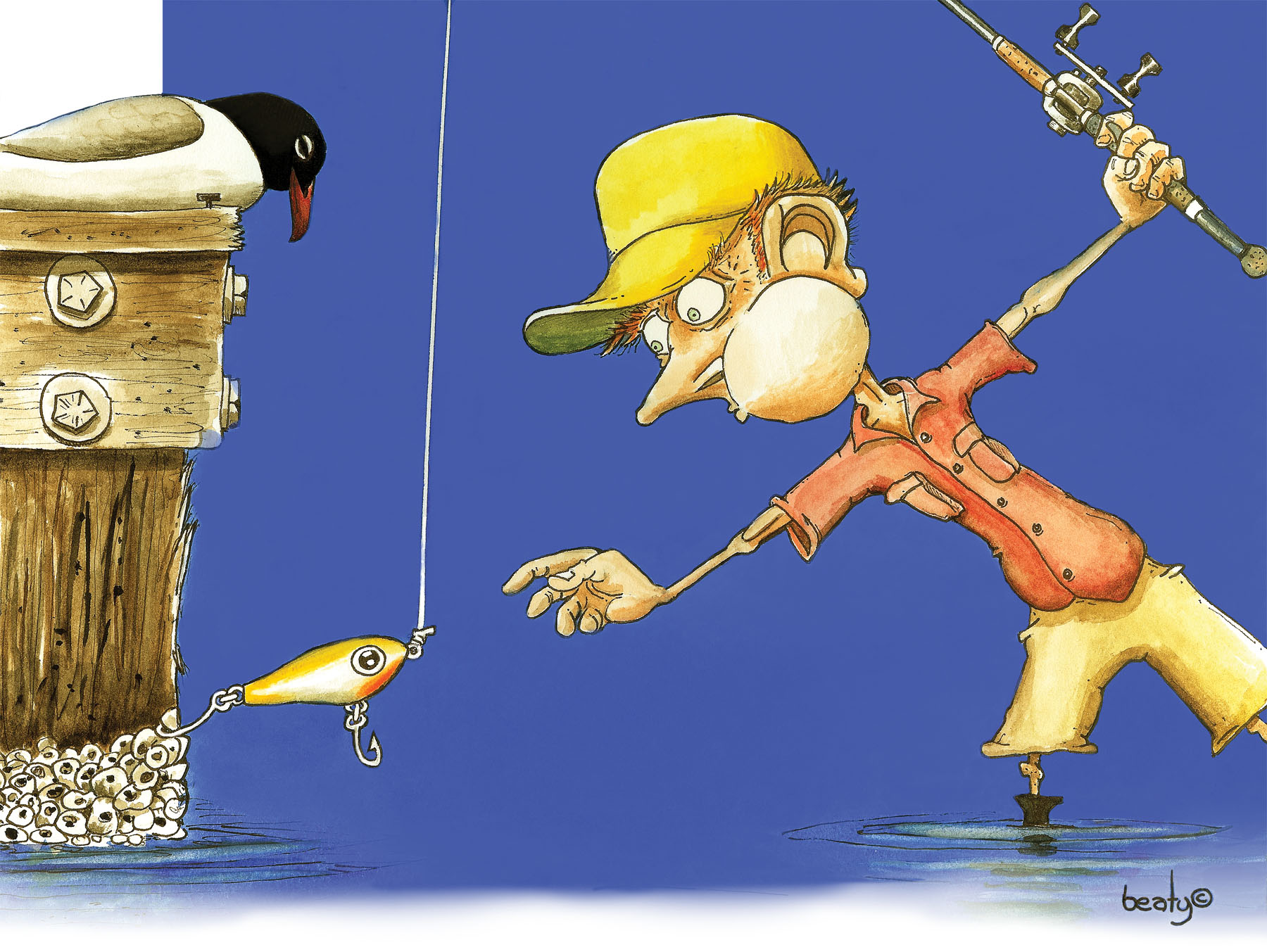 Last month we left Bodie struggling with a big fish in borrowed waders; let's see how our man handled the challenge.

Bodie knew if he didn't turn the big fish soon he was going to lose his lure and a lot of line and he didn't want that to happen. If he tightened the drag early in the fight and broke off, he'd still lose his lure but not nearly as much line would be left drifting in the bay. The fish stalled for a moment and Bodie moved faster trying to gain as much line as possible. It wasn't until he felt the cold water that he realized he'd gone too deep.

Now as you know, Bodie is not one to scream due to shock or pain but he did let out a "yippee" that was probably heard back at Haddon's Place. Tommy heard Bodie yell, saw his bent fishing rod and started moving toward the action.

"Bodie you probably shouldn't get so deep, you're gonna take water over your waders if you're not careful." Tommy advised his friend.

Bodie tried to ignore Tommy and concentrate on not getting spooled by the fish and all at once the fish gave up ground and Bodie was reeling up line just as fast as he could turn the handle.

Tommy Meyers figured there had to be another good fish there and made a long cast to the side of where Bodie was standing. The strike came instantly. Tommy set the hook hard and the fight was on. Bodie on the other hand was trying to back up into some shallower water, even though he was already soaked to the bone and it probably didn't matter.

About the time Bodie thought he had the fish whipped it surged again and started pulling hard. Bodie watched the line and heard it pinging as it stretched ever so tight. He then reached ahead of the reel to test the drag tension with his hand.

"I really can't tighten it anymore or I'll surely break that fish off" Bodie thought aloud to himself. All he could do now was hold on and hope the fish would play itself out.

Tommy yelled that he had a good one on and Bodie saw his bent rod wiggling all over the place, almost like he was in a sword fight. Tommy sure had a strange way of fishing, he thought.

The fish started taking drag again and Bodie figured it must be way oversized to be taking that much line and not giving up. He was cold and he was ready to go to the boat to change clothes and get a cup of coffee but he was bound and determined to land the bruiser at the other end of his line.

Glancing over, he could see Tommy struggling with a large fish of his own, and just as he took his eye off of his line he felt his line go slack. He reeled furiously but knew that the fish was gone. Strangely, he felt the drag of his lure in the water and he was happy to know he hadn't lost it.

When his lure came into sight he noticed that the hook had tangled in some monofilament and at the same time Tommy yelled that he had lost his fish too. It didn't take Bodie but a minute to figure out that Tommy had snagged his line and that Bodie had been fighting both the fish and his friend.

Bodie pulled in line until he saw Tommy's lure and that's when his thoughts turned to mischief. Ol' Bodie loves tricks and the old channel marker piling that stood nearby gave him a great idea. Sidling over to it, Bodie drove the single hook on Tommy's plug deep into the wet creosoted wood and began walking away while Tommy, dejectedly, reeled in his slack line.

"Well Tommy Boy, where there is one there is often another. Keep casting, that next bite could come any second," Bodie called out to his hapless friend.

Bodie had time to turn and take one step toward the boat before Tommy began screaming that he had hooked another really good one. Glancing over his shoulder he could see Tommy sword fighting with his rod again. He was putting a whooping on that old creosote post and Bodie couldn't help but chuckle. Ol' Tommy Boy was special, no doubt about it.

Tommy was too excited over his good luck to know any better, and just kept on flailing and shouting, "He's huge, it's gotta be the same one Bodie, the same exact fish!"

Bodie swung a leg over the side of his boat and was rewarded with cold saltwater pouring out of the waders and up onto his chest. By the time Bodie had changed into dry clothes and drank half a cup of coffee, Tommy still hadn't made any progress with the post he was fighting.

"Is he pulling a lot of drag Tommy?" Bodie yelled.

"Only when I really bear down on him," grunted Tommy. "He really gets after it when I pull back hard, that's when he takes more line."

Cold and ready to call it a day, Bodie yelled to his friend that he thought he saw the fish wrap around the channel piling and that Tommy might want to wade up on it and see if he could grab the fish. Tommy thought that was a good idea and waded to the piling, only to find the fish gone and his lure impaled in the wood.

Head hung low, Tommy waded back to the boat and proceeded to tell Bodie how the big fish had wrapped around the piling and broke off as he changed out of his waders. "He was huge and strong Bodie", Tommy said as Bodie started the outboard and idled up to the Stake-Out Stick.

"Oh I know he was Tommy, I had one on just like it." Bodie said, and told Tommy to pull the stick.

Tommy grabbed the stick and tried to pull it, but Bodie had stuck it good. Tommy's scrawny arms were no match for the job Bodie had given him. As Tommy leaned over to get a better grip, a field rat ran from under the center console and up the leg of Tommy's fleece wading pants. Tommy let out a scream, and like always he swallowed his chew of tobacco. In one frightened, choking spasm he launched himself from the bow of the boat.

Now those Stake-Out-Sticks are tough, and Bodie can offer up a testimonial that they'll not only hold your boat, they're hold up against the best effort of a not-so-tall fat guy as well. Bodie reversed the motor and swung the bow toward Tommy just in time to see him lose his perch on the Stick and fall headfirst into the cold water. He also got to see a field rat swimming frantically toward a nearby island.

Bodie reached down and grabbed Tommy by the collar and pulled him aboard. After slapping Tommy on the back to prevent him from choking to death, Bodie asked Tommy where his dry clothes were. Tommy told him that he had placed them in Bodie's waterproof wading gear bag so they wouldn't get wet and he had no others with him.

Idling into the boat sling after a 45 minute run in the cold winter air, Bodie saw his wading bag sitting right where he thought it would be. "Look Tommy Boy, there's my bag," he offered matter-of-factly to his shivering companion.

"Wh-what, whattaya know; some honest soul f-f-found your bag in the bay and re-re-returned it," Tommy stammered between shivers.

Bodie just shook his head. "Let's get some dry clothes on you and see if Eloisa has some hot coffee on the old wood stove at Haddon's Tommy boy," he sighed.

Embarrassed to rare speechlessness, Tommy offered only a nod in approval.