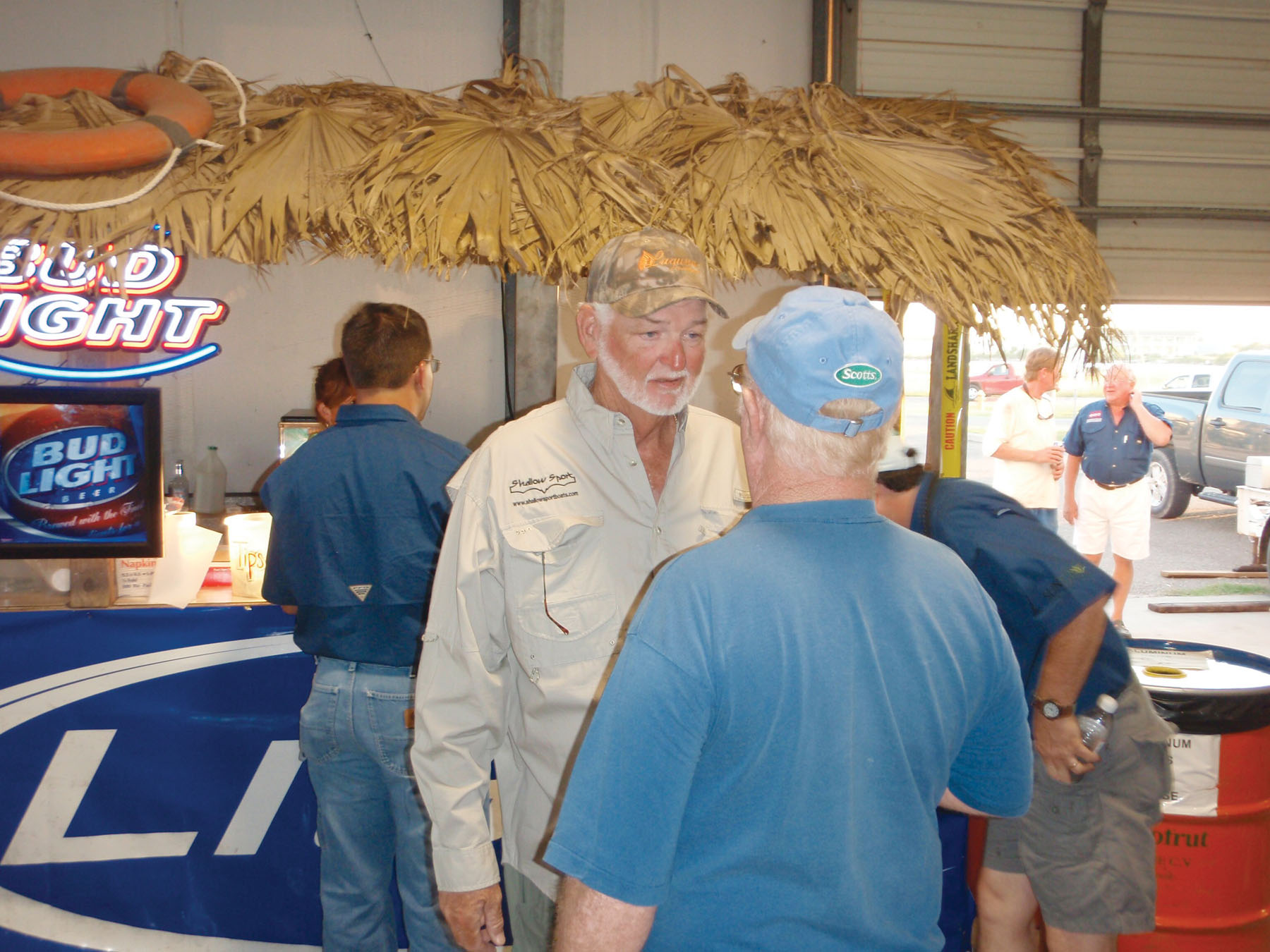 Capt. Wayne Stark in usual form; advising a visiting fisherman where he should go to find the big ones.

As we get older we lose people we care about and people we love. It's a sad part of life and there isn't a thing that any of us can do about it. If you have faith then there is comfort in knowing that the person you have lost is in a better place and that someday you will meet again. I don't know how people with no faith can cope with the loss of a friend or a loved one.

I lost a friend on June 16, 2011, when Captain Wayne Stark passed away all too soon at the young age of 62. Actually, anyone who had the pleasure of knowing Wayne lost a friend and even those of you who never met him, well you had a friend waiting on you in Port Mansfield should you have found yourself there and in need of one.

Wayne was one of those people who you like the moment you meet them. I remember quite well the first time that I met him years ago and how I could tell by the look in his eye that he was sizing me up as we shook hands. I liked him right away and since he put up with me for many years I guess I was okay with him as well. I could ask Wayne where he would advise a man to fish on a given day and without missing a beat he was pointing me in the right direction and only once did I fail to produce at catching fish in an area he suggested. Now that wasn't because the fish weren't there, but rather because Wayne was using a Shallow Sport to get to the spot and I wasn't and the water became way too skinny for the boat I was running and I made a quick exit. When I told Wayne about that his reply was "Take my boat next time; it will make it." But that was just typical Wayne being Wayne.

For quite some time I would rent the boat sling across from Wayne's when I was in Port and he would let me use his cleaning table. One day I was in a hurry and I didn't clean the table very well; okay I left some guts and scales on it and the mess had dried up by the time Wayne came in to clean his party;s fish. The next morning when we stepped into our boat there was a little bundle lying on top of the leaning post, wrapped up neatly in a paper towel. I got the message immediately. The little lesson was never mentioned by either of us but you can bet I left his cleaning spotless thereafter. That was his way.

I don't remember the size of the boat but Wayne had bought or traded for a huge Mako offshore boat one day. He had it at the south side car wash in Port and was cleaning it up. That Mako was so big and the gunwales so high; when it was on the trailer Wayne had to use a ladder to get into the thing. When we pulled in behind the boat to say hello, Wayne was sitting on the port gunwale just biding his time. We got out of the truck, said hello and made the usual small talk and I congratulated him on the boat then told him we were going to the house to unpack and would see him later. Calmly Wayne asked, "Would you do me a favor before you leave please?" Well of course I answered in the affirmative thinking he needed some soap or something and replied, "Absolutely what can I do for you?" Wayne replied, "You can walk around to the other side and stand that stupid ladder up for me so I can get out of this damned boat!" I've been in here for thirty minutes and every time I wave at someone for help, all they do is wave back and keep on driving!

Wayne's family and friends held a memorial service for him on June 22 in the East Cut at Marker 19, known to many as Wayne's Hole. They scattered his ashes there where he caught the largest trout of his fishing career. Wade fishing the next morning we all said that we were just wading with Wayne again and though we were all quite sad and down about the whole thing it made us feel a little better.

Wayne left our world much too soon but for those who knew him and whose lives he touched, we are better people for having known him. I will think of him often and I will smile.

Wayne's son Captain Chris Stark hopes to keep his dad's legacy moving forward and is going to continue to operate the guide service and the lodging at Wayne's home. I don't think anyone who fished with Wayne will be disappointed in fishing with Chris. After all, Wayne taught him almost everything he knew.

Wayne's daughter Sheila wrote a nice history of Waynes life and she printed it out to give to those who attended the service. I have copied portions of that history below and think it important because it tells you where Wayne came from and how he got to Port Mansfield.

Captain William Wayne Stark was born May 18, 1949, in Austin to Walter and Ruby Stark. He had three siblings, brothers Gene and Glenn and a sister Janice.

Wayne grew up playing baseball and golf and moved to Houston when he was seventeen. There he met the love of his life, Marie Louise Pawlik, and they were married on February 17, 1968. They were blessed with two children, Christopher Wayne and Sheila Marie.

Wayne was self-motivated and a hard worker. He began at the Painters Local Union in Houston as a green apprentice and received the Apprentice of the Year award. After many years of hard work and learning from his peers he started his own painting business. He operated that company until he got the saltwater fishing bug and decided to move to Port Mansfield and become a fishing guide. He operated as Captain Wayne Stark Charters for the fifteen years.

Wayne loved life and he always tried to make the most of everything, always leaving a lasting impression upon those he met. He was a wonderful husband and father and did everything that he could for his family.

He found joy in coaching baseball, softball, and football and he loved to play golf. He used to enjoy bowling until his wife beat him at the game so that was it for bowling. In his younger days Wayne was a member of the Houston Bass Club Association and fished bass tournaments. Then one day he got a taste of saltwater fishing and he was hooked. He got his Coast Guard and headed to Port Mansfield to live his dream.

A wonderful person was taken from us much too soon and we are left to walk this Earth with a piece missing. We will miss you and love you always.