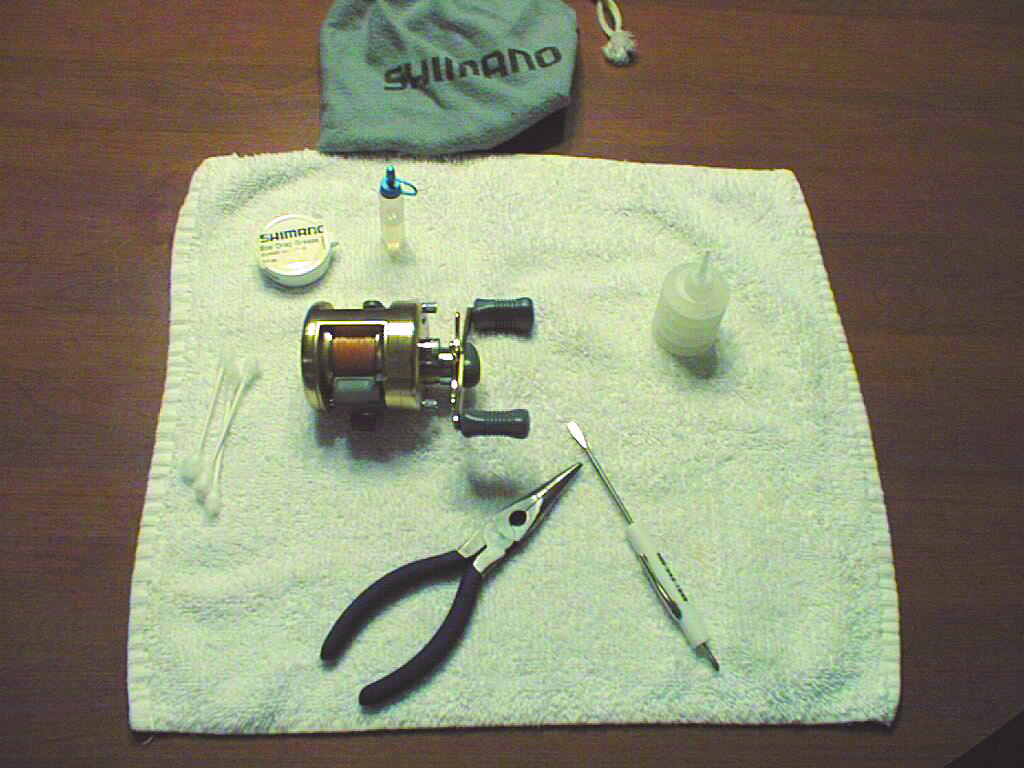 Unlike a lot of anglers I've always enjoyed tearing down and cleaning my reels. I will admit that until the Shimano Calcutta 200 came out, my reel cleaning was limited to the Ambassadeur and Daiwa reels and I had heard horror stories about tearing down one of the Shimano bait casters. Those stories were just that and after my friend Jonathan Seiler and I sat down at the Shimano booth during a fishing show a few years ago we learned just how easy it is to disassemble and clean these fantastic reels.

The first thing you'll need is a clean place to work and I suggest that you spread a white towel out to place everything on. You'll need a pair of pliers, a Phillips and a flat blade screwdriver or a combination thereof, some drag grease, reel oil, reel grease and some Q-tips.

While you are removing items from the reel, place them on the towel you're working over in the order that they are removed. This will help you keep track of where things are and also will help you when you reassemble the reel by knowing where and how things fit.

Begin by loosening the thumbscrews on the side plate and pull it apart from the reel body.

If you have line on the spool, take a piece of Scotch tape and tape it over the line and around the spool. This will keep the line in place and it will also make placing the spool back into the reel easier.

Next remove the two small screws that keep the side plate attached to the gear housing of the reel.

When you have finished removing the two side plate screws you can pull the side plate off and have a look at the inside of your reel. Take care to keep the gear housing level as you do because there are two small springs that will fall out if you're not careful.

In the picture above you can see the roller clutch bearing and the roller clutch tube still in the side plate. You should be able to pull the roller clutch tube out of the bearing with ease–if not and it's rusted you're going to have to buy some parts and probably take your reel to a pro. In any case, remove the tube and place it aside and then press against the roller bearing until it comes out of the side plate. When you have the roller bearing out, examine it to make sure that there is no rust or discoloring on the bearings. Take a Q-tip and swab inside with light oil and roll the bearing around it. If no rust shows up on the Q-tip and the bearings rolls okay, you're good to go. If it does show rust or discoloring, replace it.

After you have removed and examined the roller bearing you'll want to test the outer spool bearing, the one that you exposed when you removed the spool tension knob. To do this, take a small Phillips head screwdriver and place against the hole in the middle of the bearing. Gently turning the screwdriver will cause the bearing to turn as well and you shouldn't feel any roughness in the bearing. If you do, then you'll need to replace this bearing by removing the bearing retainer with a small flat-blade screwdriver. The retainer is really a small wire spring so take care when removing it less it wind up on the other side of the room. When the retainer is removed the bearing will press out and you can examine it to see if it has any rust or discoloring. If it does I'd recommend that you replace it. Now is a good time to do the screwdriver test again.

The gear housing is simple enough. What we will concern ourselves with here is the condition of the gears, the drag washer and the appearance of the working parts in general. You will notice the two small springs that I mentioned before here circled in red; remove these and set them on your towel as they are easily lost.

Gently lift the drag washer up with the screwdriver and place it on your towel. Using the flat-blade screwdriver, scrape all of the old drag grease off of the washer roughing up the washer as you do. When you have cleaned off both sides set it aside and clean the drag seat with a Q-tip.

When it is back in place, take a Q-tip and clean any dirty looking grease or oil from the gear case and then drop a single drop of reel oil on the outer edge of the large brass gear. This will seep down onto the plate below and lubricate the moving parts that are not easy to get to.

I like to put a small dab of light gear lube on the gears but you don't want to put too much as it will cause resistance and make your reel seem sluggish.

Next replace the two springs and add a drop of light reel oil to the top of each one.

Now you're ready to reassemble the side plate and you'll begin by replacing the roller clutch inner tube. It fits over the drive shaft with the notched end fitting down inside of the key washer.

Next, press the roller bearing into the side plate from the outside, with the blue end going in first. Then, since in this article we removed the spool bearing, replace it and the retainer as well. When it is seated, add one drop of oil to the bearing–only one drop. Replace the side plate, replace the two small screws and all that is left is to replace the items you removed from it during disassembly and the side plate is done. Before you replace the spool tension knob, check the rubber O-ring and make sure it is intact and that it is in good condition. If it needs replacing, do so as it is there to help keep water out of the bearing.

On the left side plate, the bearing that the spool sits on needs to be checked in the same manner that you checked the one in the right side plate. If it needs to be replaced or removed, you do so the same way by removing the retainer spring tapping the bearing out.

If the bearing spins okay on a screwdriver, add one drop of oil to this bearing and only one drop. Then, using a Q-tip, clean around the spool housing and make sure the area is clean of dirt and grime.

Before placing the spool back into the left side plate and reassembling the reel, make sure that the brake weights are in place and that they are set as you want them to be. In the picture below, there are two brake weights pulled out or set and four that are not.

Replace the spool and attach the right side plate, being sure that the thumb bar is in the upright position before you do. The side plate should set down flush with the reel body and if it won't, try turning the reel handle just a tad. All that is left for you to do is tighten the thumbscrews and you're good to go.