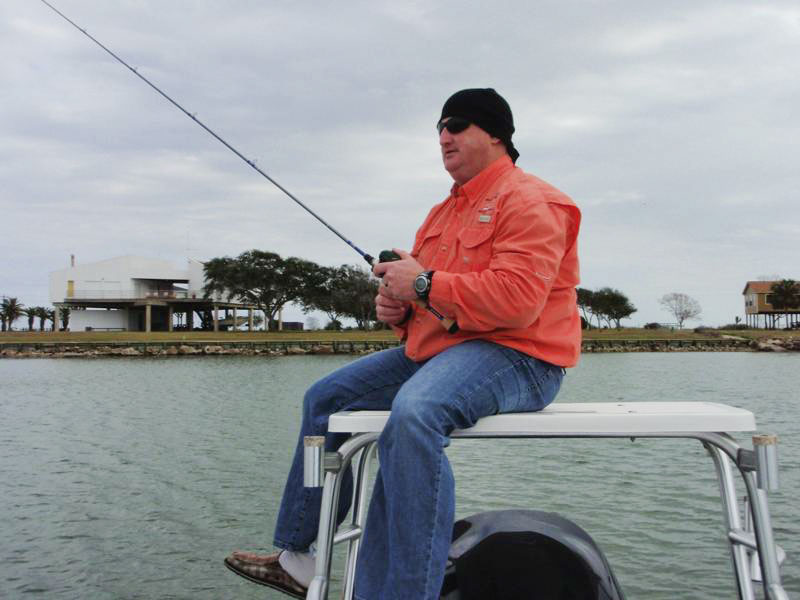 It was one of those perfect winter mornings. The wind was a tad cold out of the northeast but the water was green with the air temperature in the low fifties. It was cold enough for extra clothes, a good coat and knit cap and I was glad that when my friend Coby said that he wanted me to run his new 24' modified-V Shallow Sport that I had remembered to bring my gloves along.

The big 300hp Yamaha pushed the boat with ease and the light chop on the bay was barely felt. The quartering wind didn't get any of us wet. I must say the boat really impressed me.

The first spot we fished is an old favorite of mine. It is protected from both north and east wind and the water quality reflected that. We all have our favorite spots to fish, you know the ones that always hold fish and seem never to let you down, where you are intimately familiar with every ridge and ripple on the bottom, every gut and the depth of the water throughout the area. With high hopes and good intentions we set out to fool a few yellow-mouth trout but after two hours and having landed only two oyster clumps we had no choice but to admit defeat.

Undaunted, we moved to another spot that historically rewarded good intentions and hard work with at least a few nice fish, but again our efforts were thwarted. No fish were fooled by anything we threw at them. We couldn't even put an oyster clump in the boat much less a fish.

So we did what we usually do when we have to regroup and rethink our strategies; we pulled out some drinks, summer sausage, cheese and crackers, and discussed our options which by the way were growing fewer by the minute.

With hunger pangs relieved we could concentrate once again on fooling fish and we decided to do what used to work for us when fishing the small bays in the winter time, we pier hopped. Now if you've never tried pier hopping before don't worry about it, there's nothing scientific about it at all. You simply use your trolling motor to maneuver your boat throughout the spaces between piers and you fan cast the area until you've covered it well, then you move out and around the next pier and you do it again. Sooner or later you'll find some fish or a fish as was the case with us.

One fifteen inch kamikaze trout was fooled when I cast right up next to a pier and that was it. There were no more bites and it was time to head back to the ramp.

We talked about the day while we made the run back to the boat ramp and we discussed the full moon and the fact that the water temperature didn't get out of the 40's until after lunch. We talked about the cloud cover, the brutal east wind and how the water was just too clear and all of the other excuses that we could come up with for not catching the fish that we thought we should have. Butwe didn't talk about the absence of bait. There wasn't any bait action in any of the places that we fished, nada, zip, and when there's no bait there's really no reason for the trout to be hanging around the area either.

It really doesn't make much sense to constantly cast to dead water but when you're there and when conditions prevent you from heading out into open water to get to a different place you play the hand that was dealt to you. There's always a chance that at any moment rafts of mullet will move in or that fish will move from the deeper water up into the shallows to warm up. And all of us as fishermen and women take chances every time we head out, to, as my friend Mike McBride once said, "Match wits with something that has a brain the size of a pea." We take a chance that the fish will be where we go and usually if the weather permits and the fish aren't at the first spot then you move to another, then another and so on.

It didn't matter to us that we didn't catch fish. Oh don't get me wrong we would have loved to have felt a pull on every cast but that morning it just wasn't meant to be and that was okay. Sitting on the leaning post of a fine boat out on that green water with my son and neighbor, laughing and telling stories of fishing trips long past and enjoying the day, well only a really good bite could improve on that scenario.

So it's the fish one and the fishermen zero for now but there will be other days and other chances to redeem ourselves and prove to the fish who has the larger brain by outsmarting them with our offerings of plastic, lead and steel and we'll sure show them.

But should we find ourselves again in dead water with no bait and no fish to be fooled by our offerings and with nowhere else to go, well there's always the drinks, summer sausage, cheese, crackers and a million stories of fishing trips long past to entertain us.

After all, on some days the memories of fish that we've caught on previous trips are all that we'll be taking home with us.