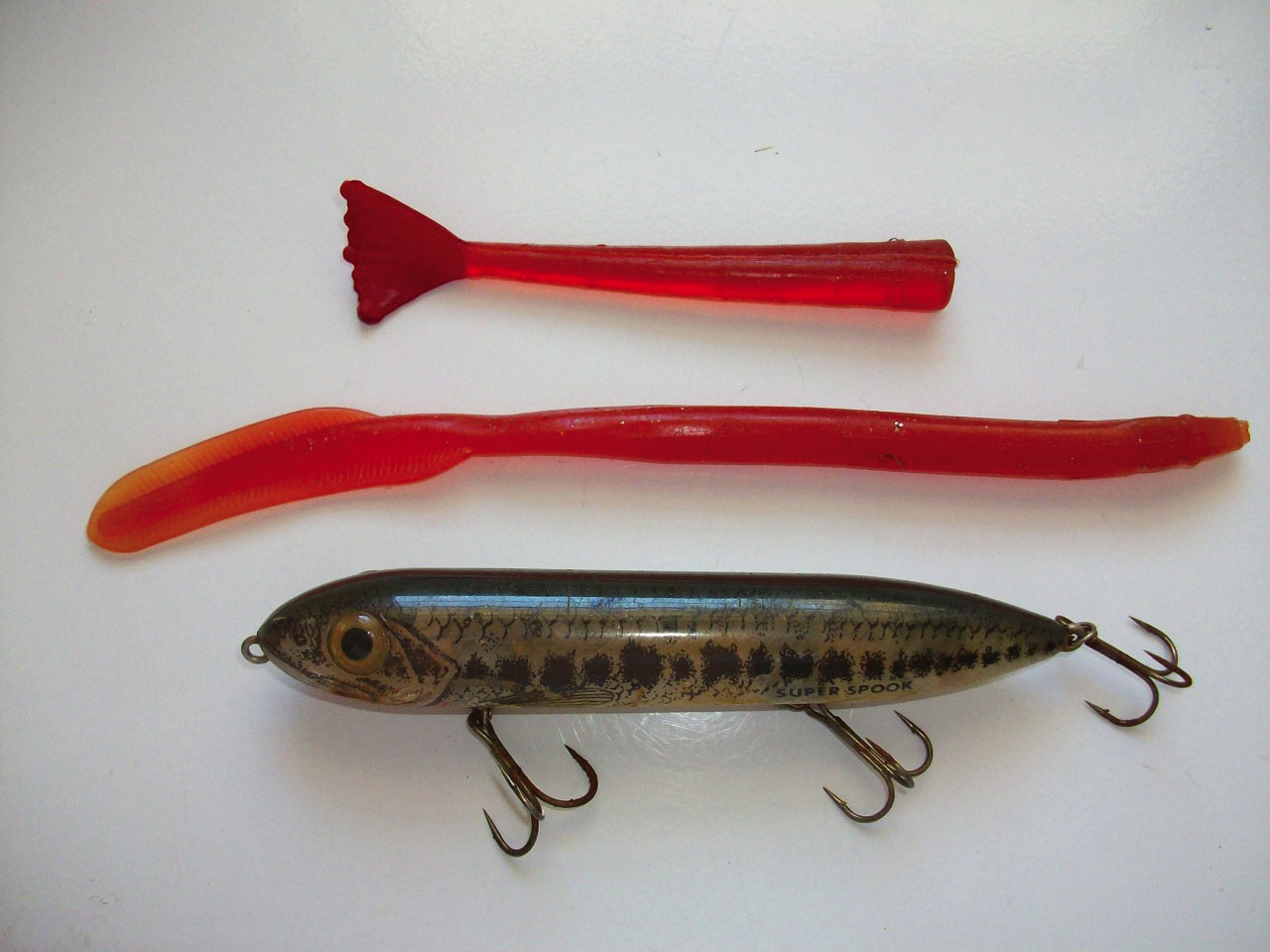 The Ernie Butler Sand Eel (center) is a large bait. When the shrimptail (we called them “Touts”) was king, it seemed even larger.
So it rained nearly nonstop and was unbelievably cold for weeks at a time this past winter and, naturally, my days on the water were fewer than I like to admit. Therefore, according to the Law of Averages, I'm guessing (hoping) that late spring and summer will be perfect. Who am I kidding?

I guess it's a part of aging of getting older becoming mindful of aches and pains, less willing to suffer pelting rain and numb fingers. I don't much care for combat fishing anymore, but does that make me a fair-weather fisherman? I think not.

My absolute greatest day of catching large trout was rainy and cold on Baffin Bay in late February many years ago. It was in the lower 40s, not much wind but misty rain stuck with us from the time we left Bird Island Basin just after dawn until we loaded the boat that afternoon.

I was planning to christen a trophy trout lure, a very large soft plastic bait that Ernie Butler was making at the time. He called it the Ernie Butler Sand Eel. Larger than anything you could buy back then and, to be honest, I had my doubts whether they would work they were that big. Ernie told me to trust him, the bait would catch big trout. So I did.

I watched my fishing partners catch multiple trout to twenty-two inches; cast after cast they were bowing up gleefully.

Me? I had made the same number of casts to the same structure but yet to receive my first hook-up. I was so tempted to cut Ernie's big bait off my line and tie on my old go-to but his words kept echoing in my brain. "Trust me," he had said. "This is the time of year to catch big troutthrow the biggest bait you have in your box."

I hadn't moved maybe twenty yards from where I had just fanned what seemed a thousand casts and threw the big chunk of plastic out past the faint shape of another cluster of rocks. Almost instantly that old familiar thump telegraphed through my rod. I waited a second to set the hook and soon the first five pound trout of the day came to hand. Over the next several hours I landed an eight pounder, another five, a seven, a four, an eight and a half, a nine, a five and a half, a six and a half, and finally another nine.

Those were the weights of my first ten fish that morning and I caught many more that were not weighed. All of a sudden I loved that big chunk of plastic.

That list of weights came from my old fishing log and sadly the few snapshot we made that morning has long since disappeared. Please remember that this was way before any of us had ever seen or heard of a Boga Grip, it is possible that it had not been invented yet. Back then we weighed our catch on some pretty primitive handheld devices so the weights can be called into question. Had I kept all those big trout, I feel safe in saying my stringer would have weighed at least sixty pounds, maybe more. Something was tapping at my wee small brain; large bait for big trout large bait for big trout. It had to be true I reasoned, nobody in our group had landed anything close to the solid and heavy trout that I was catching.

So, never having been one who cannot learn through experience, I continued fishing Ernie's big eel baits. And for a while, I did fairly well with them, but the catching just wasn't fast enough. While I was tossing the big baits and getting a hook-up now and then, my friends were hammering fish with smaller lures.

Rigged on a light jig, Ernie's baits would sink very slowly, almost capable of suspending. It was tedious work; tough to stay focused while other lures drew consistent strikes. Kind of like fishing a Corky. But like the Boga Grip, Paul Brown's creation that produced a state record and gained so much fame hadn't made it to the scene yet.

Speaking of the Corky; I've seen pictures and even a video that Mike McBride made at the cleaning table of a trout that had a huge mullet in its stomach but still ate a Corky. I've caught trout with mullet tails protruding from their mouths, too large to swallow, and I've been stunned to watch a large trout try to eat a smaller trout that was on the end of my line. So then it should be a no-brainer that the large bait is the way to go for large trout. Right?

So why don't we throw large baits all the time? Probably because we enjoy and look forward to the constant action of catching fish and a large bait doesn't produce those results with enough regularity.

See how confusing big trout fishing can be?

The largest trout that I didn't land was hooked in Baffin in late February a few years ago and I was throwing a Brown Lure Devil Eye in dark strawberry color. I didn't land the fish, came real close, several of us got a good look at her and she was absolutely magnificent. The Devil Eye is not nearly as large as the baits Ernie had given me years earlier but it did fool the largest trout that I've ever had on the end of my line (largest I have ever seen swimming for that matter.)

In all honesty, after all of the years that I've spent chasing the toothy fish I love to hunt, I think what it all boils down to is tossing something that looks edible to a trout or something that will irritate a trout enough to make it want to kill it, and, you have to toss it into the right place at the right time. If there's a ten pound trout or a one pound trout out there and it wants what it sees, it's going to be on. And if not, well, you make another cast.

Someone once said that where we as fishermen fail is when we try to match wits with something that has a brain the size of a pea.

I think that person was right.

Back to that incredible misty and bone-chilling day on Baffin; when we were loading the boat we noticed two teenage boys hefting a cooler from an aluminum boat there at the Basin. The lid of their cooler was propped open, too full to close. I had to look and I had to ask. They had more nine and ten pound trout in that box than I had ever seen before or since. Inquiring of their success they offered a tale of leaving before daylight and fishing all day. Never too fast or furious, just slow and steady, keeping the best they caught.

Their bait? Small mullet gathered with a cast net the evening before, some of them dead.