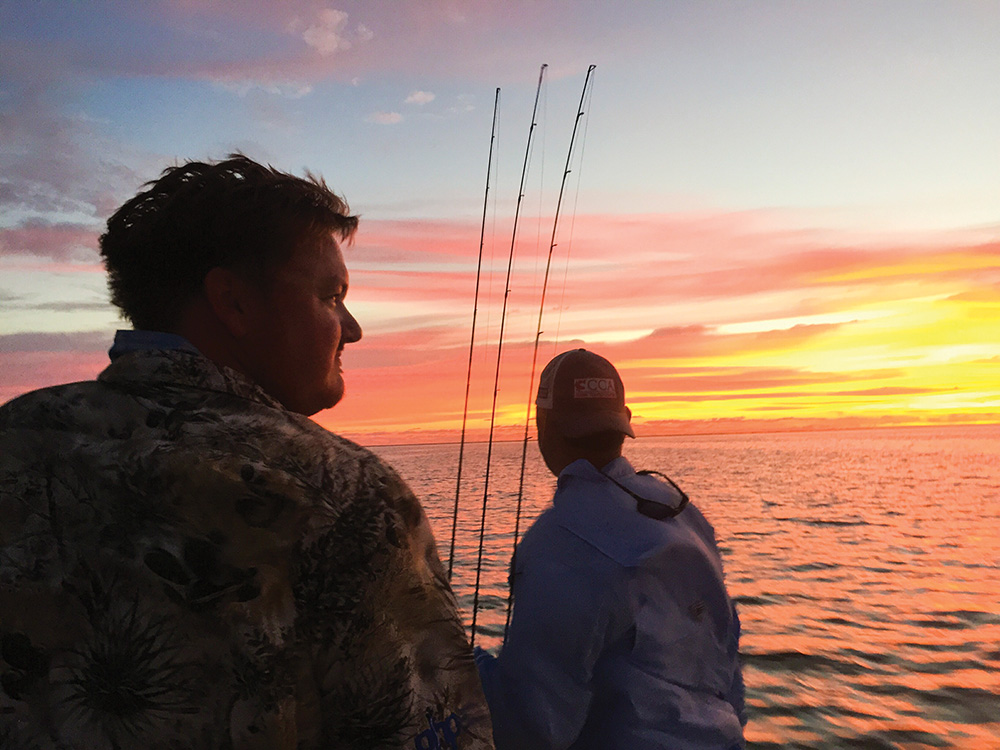 The sunset during the ride back to the boat ramp was nothing short of spectacular.

“Throttle back and ease up just past that old post straight ahead,” my friend Keith instructed me. “There’s a really nice reef here that I rarely see anybody fishing and it can hold some really nice trout.”

I put the boat into a good position about a hundred yards from the reef as Keith indicated and dropped the Power Pole. Keith then handed me and Sterling our wading belts as he grabbed his and said that he couldn’t believe that I had never fished this reef with him. My reply was that I never knew it existed. The surface of the water looked “nervous” and several heavy swirls made it look even more promising. As we separated and began moving toward the reef I wondered how I had never learned about it.

Granted, I was in unfamiliar territory. I had fished this end of the bay before, just not this particular location. I had no idea that only two or three feet below the surface there lay a pile of oyster shell about twenty feet wide and a hundred or more yards in length. The bottom dropped off of the north side to about five feet and the incoming tide flowed from those depths and rolled gently across the crown of shell. It was perfect.

The trout slammed into the Spook Junior and peeled off as much line as the drag would let her have. She danced, shook her head and pulled deep several times before she’d had enough and came to hand. Keith was working a Trout Support lure rigged weedless and the fish seemed to like the slow retrieve that he offered them. He flashed a satisfied smile as he strung his third fish of the morning. Sterling was on fish as well, tossing his favorite plum and chartreuse Norton Sand Eel. They were both ahead of me numbers-wise but as long as the trout were showing interest in my topwater I felt that I was obliged to keep throwing it.

Too often we get into a habit of concentrating on one spot, limiting ourselves to one particular area because it usually holds fish. Now that’s not entirely a bad thing, but in fishing, as in life itself, diversity can be a wonderful thing.

When we continue to hit one place trip after trip, we get to know the lay of the land, so to speak. We learn which way the guts run and how deep they are, and we learn the tiny nuances of the bottom structure. We can usually figure out where the fish will be if they are indeed there to begin with, and we learn all of this through familiarizing ourselves with the area.

So getting familiar with a particular piece of ocean front property isn’t a bad thing at all. But limiting ourselves to a few spots, over and over, and not exploring and learning other areas that can be used as back-up locations can certainly lead to empty stringers and frustrating days. In other words, don’t get into a rut or comfort zone when fishing.

I set the hook on a decent fish and she pulled hard and deep on me. She took plenty of line as she worked her way down and didn’t act like a trout at all. I figured that a red had worked its way into the bait school that was crowding the reef and the sudden surge and the loss of several more yards of line seemed to confirm that suspicion. The fish found what it was looking for as my line went slack when it cut itself free on the sharp oyster shell. I uttered a few choice words to no one in particular and was reaching for a different lure when Keith held up his Trout Support lure and pointed at it with one of those know-it-all grins. I shrugged my shoulders and found one to match the one he was nailing the fish with, got it rigged on the worm hook and tied it on.

If there is one thing I’m guilty of, it’s that I tend to fish places that I know hold fish. If someone tells me that I should try this spot or that and it is some place where I’ve never fished, I tend to accept their recommendation with a grain of salt and usually head to a place that I know. But on that reef with my son and my friend, I came to the conclusion that the places that are best known to me may not always be the best places for me to fish.

The lure landed in the middle of a pod of finger mullet and the trout hit it with a vengeance almost before I could lock my reel. Keith held up his stringer and made a slicing motion across his throat to signal that he had a limit before I could get the trout on my stringer. I reluctantly turned away from that productive little reef and met him halfway back to the boat.

Sterling was already in the boat with his limit. “We have what we need for the fish fry, what say we call it a day?” That was fine with me, but I hated to leave that new place so soon. Then again, I knew that I’d be back there again when the conditions were right.

We enjoyed a marvelous sunset on the ride back to the boat ramp and it brought memories of other great days in other spots on the bay. I thought about some of my favorite places to fish and wondered how we would have done at one of those spots. It would have been very hard to have done better than what we did. We were in the water, we were on fish, the fish cooperated and we strung what we wanted to keep. It would be very hard to improve on that.

Besides, I have a brand new spot to add to the list of my favorites. I just have to remember to go there instead of one of my other “favorite” spots.