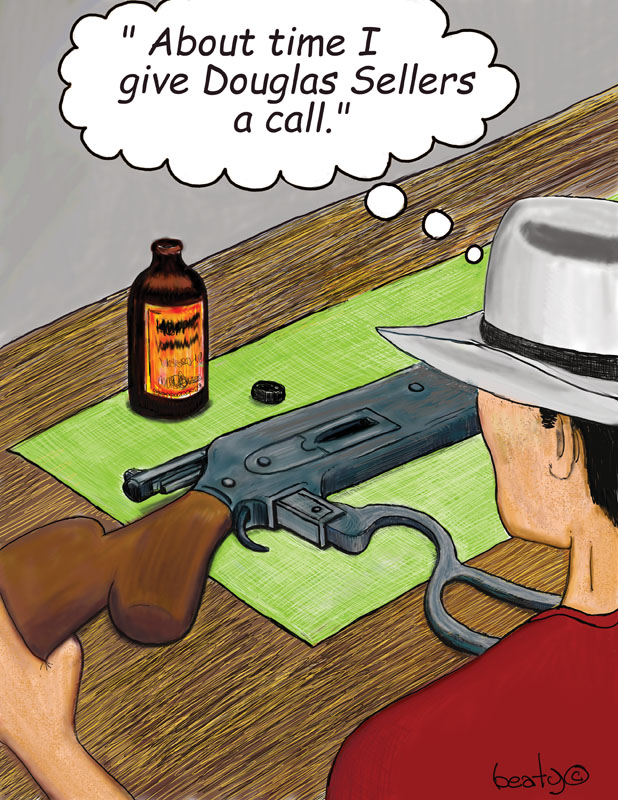 Bodie eased the hammer back on the antique Winchester. The click-click as it reached full-cock sounded loud inside the tiny elevated deer blind and he prayed the buck wouldn't notice. With the rifle's fore-end stock across his muscled forearm on the window sill, he put the gold bead of the front sight directly behind the shoulder of the whitetail buck that was one hundred and fifty yards in front of him.

Making sure the front bead was centered in the receiver peep and still on the buck's vital zone, he began a slow trigger squeeze. The rifle jumped while Bodie noticed the tell-tale high kick of its hind legs. Three leaps and it crumpled stone-dead, a perfect heart shot.

Knowing a second shot would not be needed, Bodie didn't bother to lever another round into the chamber. He leaned the prized rifle carefully in the corner of the blind and gathered his gear. Climbing down he marveled at the hand-cut diamonds of the checkering glistening in the early morning sun. "Never would have been able to afford a rifle like this," he muttered.

Arriving at his truck Bodie put his gear on the front seat and wiped the Winchester before sliding it into the case. With that done he climbed into the cab and drove down the sendero to pick up his buck.

It was a beautiful cold, crisp morning and Bodie felt a little homesick as he drove along the mesquite, huisache, blackbrush and guajillo-lined sendero. "The brush country of South Texas is a whole different world," he reflected.

Bodie pulled up next to the downed buck that had fallen at the base of a big Texas ebony tree. The branches covered with half-inch thorns brought back the painful memory of having climbed one as a small frightened boy to escape a pack of javelinas. The image of his mother doctoring hundreds of nasty scrapes and cuts and removing embedded thorns with tweezers and needle came back vividly, and the second-guessing of whether standing his ground might have been better.

Bodie dropped the tailgate and reached down to grab the front legs and antlers of the buck. It took all the strength he could muster to get one side of the antlers secured between the truck body and the tailgate cables so that he could lift the rest of the deer up. "I need to get me one of those fancy electric winches if I'm going to do any more hunting down here," he exclaimed to himself. "That buck gotta weigh 175 pounds!"

With the deer loaded, Bodie started the five mile drive back to the ranch house Mr. Connor had built on the property and the cleaning rack to skin and quarter it.

Rounding a sharp curve in the two-track, Bodie hit the brakes and grabbed his rifle case. Hurriedly unzipping and getting the Winchester out the window, he levered a fresh round into the chamber and leveled the sights on one of five coyotes milling about a momma cow. The rifle roared once, then instantly again, as the three yet healthy predators stole for the brush. Bodie drove up to where the dead ones lay, put his rifle up and got out to check on the cow.

She had just dropped a calf and the 'yotes hadn't been long in finding it. Walking to the edge of the sendero he lifted the calf in his arms. With the wild-eyed momma watching, he climbed into the truck with the calf in his lap to continue the drive to camp. Momma trotting along behind.

Bodie called ahead to Jake the ranch foreman and told him that he had a calf and momma cow to be put up for a while, and to sharpen his skinning knife.

"No problem, boss. Just leave some backstrap in a cooler for me when you head home," Jake replied.

The drive took a while, what with Bodie idling along so the cow could keep up. Jake had the gate open so Bodie pulled close, stepped out with the calf and walked into the pen as the momma cow followed. He placed the new calf on the straw Jake had scattered and the cow was already licking it as he latched the gate.

"Jake, come give me a hand with this buck, if you wouldit's a might more deer than one fellow can handle."

Bodie and Jake unloaded the buck onto the concrete slab and, pulling a well-worn pocket knife from the leather scabbard on his belt, Bodie made a slit in each hind leg between bone and tendon for the gambrel hooks.

Jake started cranking the winch after Bodie had the gambrel set and hoisted the buck toward the top of the cleaning rack. "Sure is a big old deer. I'd bet it was a chore to load by yourself."

"Yeah... and my old back is sure fussing about it right now," Bodie chuckled.

Between them they made short work of the skinning and while Jake was quartering the animal Bodie made busy sawing the skull and antlers for placement on the "antler board."

It had been Jake's idea to put up a wall between the north wind and the cleaning rack and it was Bodie who decided that's where they'd nail antlers that were not headed to the taxidermist.

With the antlers on the board, Bodie stood to admire them a few seconds and then walked to his truck for his rifle case and gun cleaning kit. The table on the front porch of the house would made a fine work bench. Levering out the remaining live rounds to avoid blowing his own head off, he dipped a bronze brush in Hoppes bore solvent and ran it down the barrel. He repeated this several times and then switched to a cloth patch. Another patch soaked with oil and a final dry patch completed the bore cleaning.

Bodie was carefully rubbing the action and receiver with an oiled patch as Jake came closer to admire the Winchester. "I saw a rifle like that in a museum a long time ago in San Antone," he announced; whistling at its beauty.

"It's a Model 71 Winchester, Jake. It shoots the .348 Winchester cartridge and pretty much kills whatever you can hit with it."

"Never heard of that caliber before, Bodie, must be pretty old," Jake remarked.

"Go to my truck and look in the bag on my front seat. Bring me a box of those shells over here and I'll show you," Bodie instructed.

"Nah, but I carry that bag to be sure that I'll have plenty ammo for whatever rifle or pistol I take with me," Bodie replied.

Jake brought the box of .348s to the table and pulled one out. "Man that's a big old shell right there," he exclaimed.

"It sure is and that ammo is about as easy to find as hen's teeth," Bodie informed him. "I just like taking this rifle out and shooting it every now and then but it's so rare and valuable that I seldom do."

"How much did you have to give for it?" Jake asked.

"You know Jake, I didn't buy it. An acquaintance gave me this rifle as a gift for helping his daughter out of a tight spot."

"Well you're sure lucky to have such an acquaintance, Bodie. Do you guys fish together or something?"

Bodie pondered the question. "Well Jake, as a matter of fact we do not. Fact is, Mr. Sellers is a very busy man. Has several businesses and evidently makes a lot of money. Flies all around the world doing business deals, hardly ever home. I guess that's the reason I never asked him to go," Bodie sighed.

"Well, maybe you should call him, Bodie, he just might take you up on the offer. That's a mighty fine looking piece of wood and iron right there, and you're lucky to own it."

After Bodie had packed the rifle and the rest of his gear in the back seat, he asked Jake to give him a hand loading the cooler into the bed of the truck.

"Did you keep a backstrap, Jake?"

"I sure did and I appreciate it. I'll put it to good use," Jake winked. "When do you think you'll be back down?"

"I have to bring some folks hunting but I'm probably going to wait for the new moon," Bodie replied. "Let me know if you need anything, and see if you can't put a dent in the coyote population until then."

Turning through the ranch gate onto the blacktop, Bodie made a mental note...

Call Douglas Sellers as soon as you get home. It's high time you take the man fishing!"