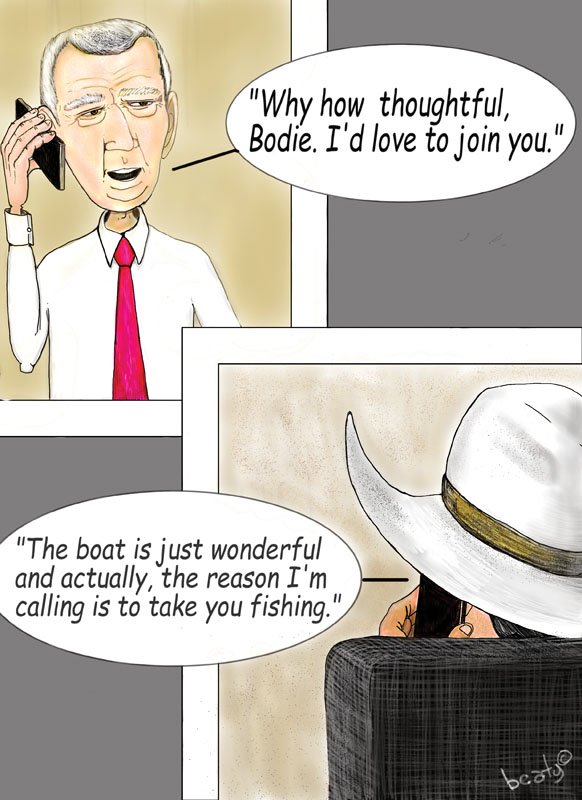 Bodie thought how best to approach Douglas Sellers about going fishing during his long drive home. He wondered if he'd even be able to get him to go, much less get him out of the boat and into the water for wading.

Bodie dialed Tommy on his cell phone and told him of his plans.

"Gee, Bodie, I doubt he even knows how to fish," Tommy said to his friend.

"Well, he will after we've shown him how," Bodie replied. "If I can get him to go we're going to have to be patient and help him. Can I count on you?"

"Sure, Bodie, sure thing. But are you inviting Red? If Red's going with us you can count me out because all he'll do is pick on me and make me look bad in front of Mr. Sellers," Tommy whined.

"I haven't talked to Red yet but that is a good idea to get him to go with us."

Bodie took Tommy's whining as a cue to say goodbye and then dialed Red.

"Say Red, I'm going to invite Douglas Sellers on a fishing trip and I'd like for you to go along to help me introduce him to wade fishing and just bay fishing in general."

"I think it's a great idea, Bodie, I got to know him fairly well on the drive up to Palacios when we picked up your new boat from Tran. I like him." Red replied. "I hope Tommy's not going, because if he is you can count me out. He embarrasses the daylights out of me," Red growled.

"I don't know, I haven't called him yet so rest easy," Bodie grinned into the phone.

Bodie decided to wait and call Douglas Sellers when he got home since he was going through an area of sketchy cell phone coverage. He planned the trip in his mind and almost missed the turn into the ranch.

Bodie met with his ranch foreman, Monroe, and went over some things. Then made some calls to order fencing materials and other things Monroe mentioned. Finishing that he headed to the house.

Once home and after unloading his gear and the ice chest of meat, he sat down to call Douglas Sellers. Bodie hesitated a few moments then made the call.

A voice answered: "Hello, this is Doug, who is calling?"

"Mr. Sellers, this is Bodie Allen calling and I hope I'm not interrupting anything important."

"Why Bodie Allen, it's great hearing your voice. I hope everything is going well with you, and how is that boat treating you?"

"I'm fine and the boat is just wonderful, and that's part of the reason that I'm calling you."

"Well I hope nothing is wrong with the boat, but if there is I can certainly take care of it for you, Bodie. And please, just call me Doug, we're old friends now."

"No sir, nothing is wrong with the boat at all Douglas, I mean Doug. What I want to do is to take you fishing."

"Fishing? You want to take me fishing?"

"Yes sir, I just took a nice buck with the Winchester you gave me and I decided that I needed to do something for you."

"Saving my daughter's life was more than just doing something for me."

"I know, I know but I would really appreciate it if you would come fishing with me on my new boat and spend a day on the bay while hopefully catching some nice trout and redfish."

"You know what, Bodie, I really like the idea and I accept the invitation. When would we be going?"

"The weather looks like it's going to be really nice the rest of this week, so how about you pick a day and we'll make it happen."

"Why actually, Bodie, I'm free for the rest of the week so just choose a day and tell me what I need to bring."

Bodie was pleased at the excitement in his voice. "Let's shoot for the day after tomorrow and you'll need a favorite bay fishing rod and reel, waders, and a wading jacket if you have one."

"I'm afraid I don't have waders or a wading jacket, but I'll have them by then. And I'd like to bring lunch if you don't mind. How many will be on the boat?"

"There will be four of us, Doug, and thanks for offering to bring lunch" Bodie said.

Bodie gave Doug directions to the boat house, the time to arrive and his slip number. He then suggested a few places in Victoria where he could get waders and a wading jacket.

Bodie could not have been happier and the thought occurred that he should have extended the invitation a long time ago.

Bodie got with Red and Tommy and let them know when to be at his boat slip then decided to take a shower and go to Haddon's for a bite to eat.

Bodie was just parking his truck at Haddon's when an excited Tommy pulled in beside him. "Bodie, hey Bodie" Tommy yelled. "I was thinking about frying up some chicken for the trip. I betcha Mr. Sellers hasn't ever even had fried chicken as good as mine."

"He's bringing lunch, Tommy, so don't go to any trouble."

"He'll bring that whipped liver and hoity-toity stuff, Bodie. We'll starve on little olives and dead fish eggs on crackers, it will just be awful."

Bodie shot him the look that says the discussion is over. "Let's give him a chance, Tommy, it's the least that we can do for him."

Tommy and Bodie walked inside and grabbed an open table. Eloisa came around the bar and brought them two cold beers, Red came over and sat down and Bodie ordered a bowl of Eloisa's famous Scorched Earth Chili.

"I don't know how you eat that hot chili, Bodie. The last time I had some I almost choked to death," Tommy whined.

"I know you did, you ignorant freak of nature, and if Bodie hadn't been there to get your cheeseburger out of your throat you would have died," Red snarled.

Tommy glared at Red and leaned over and whispered to Bodie. "See that's why I don't want him to go fishing with us."

Bodie just nodded his head as Red leaned over and whispered in his other ear. "See, that's why I don't want him to go fishing with us."

The trio visited for a while, Bodie beat both of them in several games of pool and then announced that he needed to get some sleep because he had a busy day at the ranch in the morning.

When Bodie got home he pulled out a couple of Shimano reels that were like new and already tuned up and paired them with a couple of custom rods that he had won in a fishing contest. He put fresh braid on the reels and then set them aside. "Those should work for Doug; Lord knows what he might show up with the day after tomorrow," Bodie said out loud.

Bodie was up early the next morning and didn't take time for breakfast which was unusual. He poured coffee into a fancy new Yeti cup that he had gotten for Christmas, pressed the lid on and took off for the ranch. Placing the cup into a cup holder on the console, he placed a call to an implement company in Victoria. He spoke with a salesman who assured him that the new head gate and some other items were scheduled to deliver before noon, and then made a call to Monroe.

"Monroe is the water well in the big pasture still giving you problems?" Bodie asked his pasture manager.

"The pressure is up and down all the time, Bodie. It would be nice if we could have it checked out." Monroe replied.

Bodie dialed another number and spoke to someone at the water well service he did business with and they too said someone would meet him at the ranch headquarters before noon. "Everyone's going to get here at the same time, yeah right" Bodie said to himself.