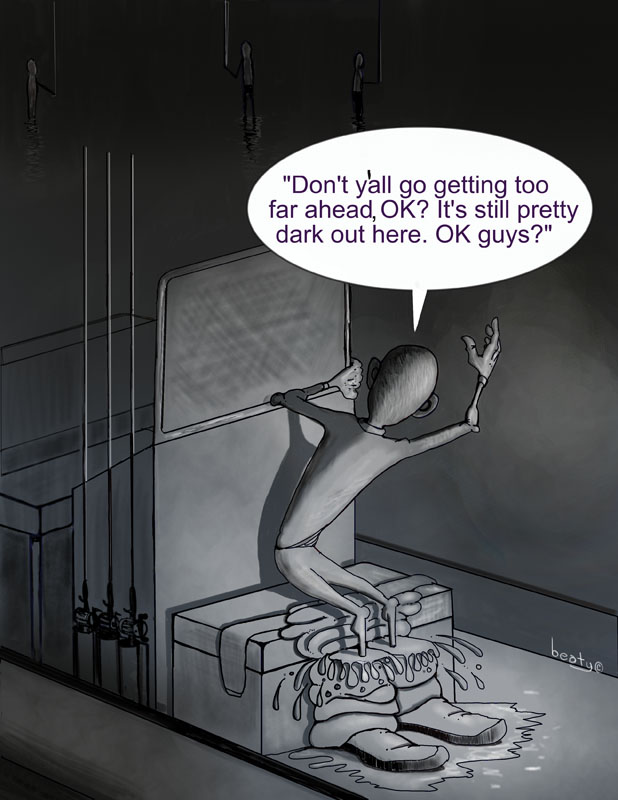 Bodie was stirring a pot of chili for his and Monroe's lunch when the headgate and other stuff they'd ordered from the implement company arrived. The water well serviceman showed up right behind. Bodie looked at his watch, shook his head in disbelief, turned the stove off, and went out to meet them.

After the headgate and other equipment was unloaded and Monroe had shown the water well man to the pump they were having trouble with, Bodie called him to come inside and eat.

"It is a might hot, I'll give you that," Bodie agreed, dabbing his brow with a paper towel.

Bodie informed Monroe that he would be available on his cell phone all the next day and that he would swing by after he got in from fishing.

"No, just her dad. And you should be ashamed of yourself–you a married man." Bodie jabbed back.

Monroe leaned back in his chair and grinned.

Satisfied that everything was in order, Bodie headed to the house and picked up his fishing gear and then drove to his boat slip. Locking his gear in the tall cabinet, he gave the boat a quick once-over, just to be sure. Preparing to lock the gate he remembered he'd have four onboard in the morning and added a life jacket to the bow compartment.

Bodie was early to the dock the next morning and was loading gear aboard the big SVT Tran Cat when Tommy walked in and greeted him good morning.

"Good morning to you, too, Tommy. Are you ready to catch some fish?"

"Shoot, Bodie. We ain't gonna catch anything with that old rich guy coming along. We'll be babysitting all day and it's not going to be any fun. The only thing that could be worse is if Ol' Red was coming," Tommy whined.

"Don't worry about Doug Sellers, Tommy. I'll have him under my wing. Your job is to be nice and get him anything he needs, if by chance I'm not handy."

Tommy was fussing around stowing his tackle and dry bag when Red showed up.

"What in the name of all things good and evil is HE doing here?" Red demanded.

Tommy was equally indignant. "What are YOU doing here, Red? You're not even supposed to be invited on this trip!"

Bodie interrupted, telling them of the trip's importance.

"Look here you two. I want to repay this man for the kindness he has shown me. I need you both to help me with that and I expect you'll behave like perfect gentlemen. Got it?"

"Whywhywhy sure, Bodie," Tommy groveled. "Red and I both want to help. Right, Red?"

"Good! Then let's us put on a fun day of fishing for Mr. Sellers," Bodie said with sternness still in his voice.

Tommy was helping Red with his rods and gear as Doug Sellers walked in.

The trio returned the greeting in unison. Red and Tommy nearly stumbling over each other to help Doug with his gear.

"I had to go to Victoria to pick up some things so I stopped by Popeyes and got a big box of chicken for our lunch. I do hope you all will approve of spicy–it's my favorite," Doug announced.

The trio quickly agreed that Popeyes' spicy recipe was awesome, as Bodie began sizing up his rods and reels.

None of the outfits were new but it was obvious that either he hadn't used them much or they'd been especially well cared for. Bodie couldn't make out the builder's name on the three rods but the wrappings were identical, each different length and possibly also different actions. Customs, no doubt, with the old Chronarch Super-Frees.

I don't believe he'll be needing what I brought for him, Bodie noted silently.

After Doug's food and beer in cute little green bottles was placed in the ice chest, Tommy lowered the boat into the water. Red fired it up and idled away from the slip. Bodie gave Doug a quick tour. Important stuff–like where life jackets, fire extinguisher and emergency gear were stored. Red steered into the ICW and asked Bodie which way they were headed.

Motioning north, Bodie said, "Up the ditch, Red. The wind is right for that slough behind Goodbye. If they're not in there we won't have but a short ride over to Grassy."

"Which of these switches turns on those fancy LED running lights?" Red asked.

"Top left, should be lit up in red," Bodie replied.

Red steered through the cut that led away from the ICW, and with no boats ahead he hit the light switch. The whole world lit up–illuminating everything you could possibly need to see to navigate safely at speed.

"Well okay but, I sure hope I don't like her too much. My wife will kill me if I tell her I'm buying one of these."

"If I can't find Goodbye Island in the dark I'll just take up golf," Red grumbled over his shoulder.

The boat jumped effortlessly on plane as Red pushed the throttle to three-quarter and adjusted trim.

Bodie had absolutely no worries about Red's ability. The crusty old salt was running boats before he was even in diapers.

As the boat skimmed along Doug, Bodie and Tommy sat behind the elevated console and talked about where they were headed and what they were going to be doing.

"Where we are going to be fishing is behind an island, and with this light north wind it should be nearly dead calm," Bodie explained.

"The slough there is about four feet deep with this tide, so don't go over your waders," Tommy warned. "The water's still kind of chilly."

Bodie and Tommy looked at each other in surprise. Then Bodie answered, "Well yes sir, I think the conditions could be perfect for topwaters."

Red eased back on the throttle and nosed into a small cove at the tip of Goodbye. He double-tapped the Power-Pole and switched off the powerful running-flood lights.

"I figure we'll anchor over here and ease around on the downwind side. So we don't spook any fish," he called out.

The others nodded agreement and with the aid of LED deck lighting began donning waders and tying lures.

"Bodie," Doug inquired, "I forgot drinking water. By chance, have you any on the boat?"

"You'll find plenty in the forward cooler, Doug. Along with beer, and I think some orange juice, if you care for any."

Tommy was the first of the crew ready and was quickly down the ladder.

"EEE-OWW! This water's COLD!" he screamed.

Red and Doug almost jumped overboard at Tommy's exclamation while Bodie glared irritably at his hapless friend in the water.

"Tommy, do you want to scare every fish in the bay?" he asked, agitated.

"I forgot to patch the hole in my waders and that cold water rushed in and liked to take my breath away. I'll probably end up with the new moany or something," Tommy whined.

"What the hell is new moany?" Red snarled, but let it drop when Bodie nudged him.

Doug chimed in, "Maybe from my scouting days, I always prepare for things like this. I brought extra waders, Tommy. If you've some dry pants I can fix you right up."

Tommy sprang back up the ladder, allowing that he had dry pants in his bag. Shivering and shaking as he struggled with his waders, he paused and looked suddenly sickly, mumbling.

"Well what the Hell are you waiting for you ignorant little?"

"Uhright, I mean sure thing little buddy. Here's my towel to dry off when you get out of those wet pajamas."

"I ain't wearing skivvies, and I don't want to get clear nekkid in front of you all," Tommy finally blubbered.

"We don't want that either, Tommy. Wait till we're off the boat and you'll have privacy," Bodie ordered.

Doug handed Tommy his spare waders as he turned to follow Bodie down the ladder. "Hurry up, my boy. This spot sounds like it might be pretty fishy."

"Don't y'all go getting too far ahead, OK? It's still pretty dark out here," Tommy blurted shakily. "OK guys?"

All three could only shake their heads as they shuffled away.