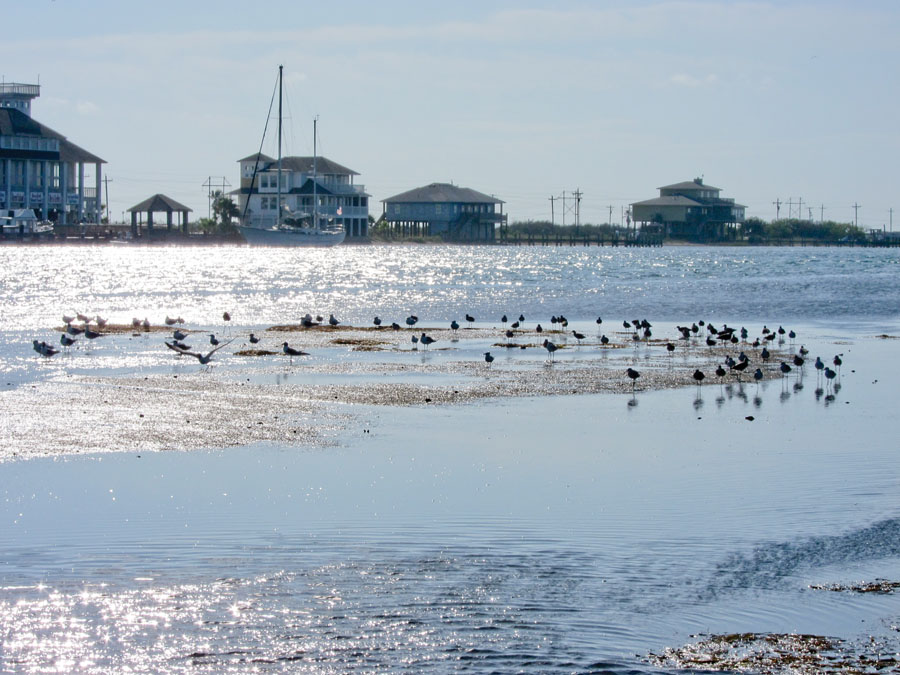 "Throttle back and ease up just past that old post straight ahead" was the order from my fishing partner. "There's a really nice reef here that I rarely see anybody fishing and it can hold some really nice trout."

I put the boat into a good position as Sam slipped the anchor out and then handed me my wade belt. Sliding over the gunwale he commented that he couldn't believe that I had never fished this spot. My reply to him was that I didn't know it was a reef there.

There was a lot of "nervous" water in front of us and the heavy swirls that caught my eye looked very promising. As we separated and began moving along the reef, I wondered how I ever escaped learning it.

I couldn't begin to count the number of times that I'd passed this spot and failing to notice the shell bar about 20 feet wide and 100 or so feet long. The water dropped off of the north side to about five feet and the incoming tide came up from the deeper water and just rolled across the shell. It was perfect.

The trout slammed into the Skitterwalk and peeled off as much line as the drag setting would let her have. She danced, shook her head and pulled deep several times before she had enough and came to hand. Sam was working an Assassin rigged light and the fish seemed to like the slow retrieve that he offered them and he looked over and smiled as he strung his third fish of the morning. He was ahead of me numbers-wise but as long as the trout were hungry for my topwater bait I was obliged to keep throwing it.

Too often we get into a habit of concentrating on just a few spots, limiting ourselves to particular areas because they frequently hold fish. Now that's not entirely a bad thing, but in fishing, as in life itself, diversity can be wonderful. When we continue to hit one place trip after trip, we get to know the lay of the land, so to speak. We learn which way the guts run and how deep they are, and we learn the bottom texture and all the structure. We can usually figure out where the fish will be if they are indeed there to begin with and we learn all of this through familiarizing ourselves with the area. So getting familiar with a particular piece of ocean front property isn't a bad thing at all. But limiting ourselves to a few spots, time and time again, and not exploring and learning other areas that can be used as back-up locations can lead to empty stringers and frustrating days.

I set the hooks on a decent fish and she too pulled deep on me into that hole on the north end. She took plenty of line as she worked her way down and didn't act like a trout at all. I began to think maybe a solid red had worked its way into the bait that was crowding the reef and the sudden surge and the loss of several more yards of line confirmed that thought. The fish dove around the corner of the shell dropoff and my line went slack - a victim of sharp oyster shell. I mumbled a few choice words to no one in particular and was reaching for a new plug when Sam held up his Assassin, pointing at it emphatically with that damned know-it-all grin I've seen too many times. "Yeah I see it," I muttered under my breath with an exaggerated shrug of the shoulders and then dug around until I came up one that nearly matched. I giggled quietly as I threaded it onto a sixteenth ounce jig thinking I'd soon whip him at his own game.

If there is one thing I'm guilty of, even though I know better, I tend to fish places that I know hold fish. If someone tells me that I should try this spot or that and it is some place where I've never fished, I accept their recommendation with a grain of salt and usually head instead to a place that I know. But on that reef with my friend, I came to the conclusion that the places that are known to me may not always be the best places for me to fish.

The Assassin landed in the middle of a pod of finger mullet and the trout hit it with a vengeance just as I was locking my reel. Sam held up his stringer and made a slicing motion across his throat and when I had my fish on my stringer I met him back at the boat. "We have what we need for the fish fry, what say we call it a day?" That was fine with me, but I hated to leave that new place so soon. Then again, I knew that I'd be back there again when the conditions were right.

As we made our way back to the boat ramp I thought about some of my favorite places to fish and wondered how we would have done at one of those spots. It would have been very hard to have done better than what we did. We were in the water, we were on fish, the fish cooperated and we strung what we wanted to keep. It would be very hard to improve on that.

Besides, I have a brand new spot to add to the list of my favorites.