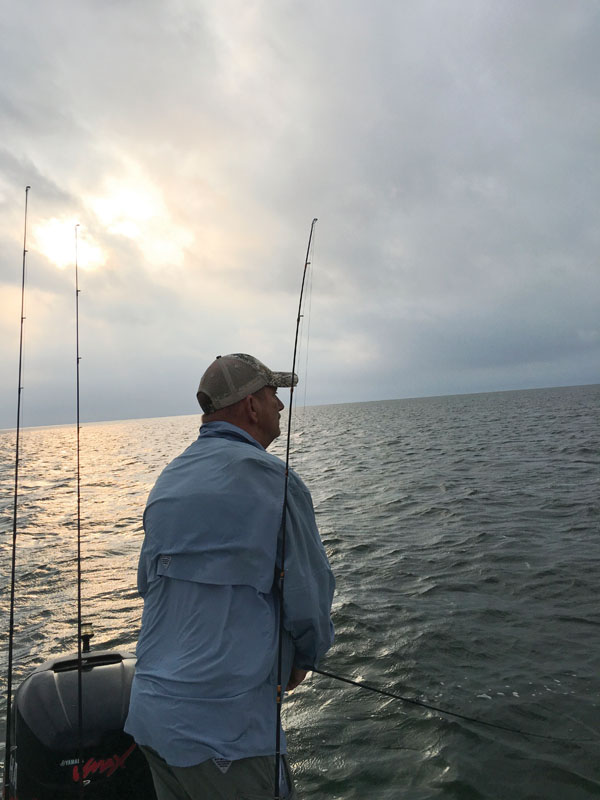 Drifting the Lower Laguna at first light. Does it get any better?

After a long dry spell, the planets all became aligned properly, the weather cooperated almost fully, and I was able to head south to Port Mansfield for some much needed time on the water.

It had been a while for me since every time that I was able to go the weather was bad or there was too much fresh water in the local bays and it was driving me nuts.

Anyway, my son and I accompanied by our friend Keith, took off on a very rainy Thursday afternoon. While the forecast for Port Mansfield was great, the rain and wind that we drove through until almost Refugio was really bad. I had to slow down to 40 miles per hour sometimes just to be able to see where I was going while plowing through a lot of water on the highway.

We made it to Port early enough to fish that afternoon but the weather caught up to us. Rain, lightning and strong wind prevented us getting on the water.

The next morning we could see the stars in the skies, had a light north wind, so with high hopes we splashed the boat and headed south.

Our first stop produced few keeper trout but a couple of tournament size reds stretched our lines and went into the fish box. We moved to a spot that was a little deeper than where we had been fishing and the trout bite was on.

We were fishing 1/8 ounce Hogie screw-lock heads and the lure that produced the most, to no surprise, was a red and white MirrOlure 4" Soft-Eel, which I understand has been discontinued and replaced with the Provoker. Fishing a color change in five feet of water was the ticket and while we didn't box a boat limit of trout we sure had a good time.

We called it a morning around noon and headed back to Port for something to eat and a well deserved nap. I pulled a muscle in my lower back picking up a too-heavy-for-one-man cooler so I didn't go out that afternoon but Keith and Sterling did. Our friend Robert made it down and went out with them and they found more reds and a good number of trout before heading in right at dark.

We were fishing a full moon on this trip and the solunar minor and major feed times were pretty much right on the money. By the way, throughout the day, when the fish hit the lures we could tell instantly if they were feeding or just hitting it out of predatory instinct. During the minor and major feed times the fish engulfed the baits very aggressively while competing for food; there was no subtle tap telegraphed through the rod, the fish would just slam the bait.

For the record there is no shortage of 15" trout in the Lower Laguna Madre. We don't keep anything close to the 15 inch mark, we like them to be 16 or longer and my goodness the fish in that size range are everywhere. The fishery down there appears very healthy and the catching is great right now.

The only complaint I have, and it's really not a complaint, more like a gripe from an old guy, would be the grass. Man, the floating grass is everywhere, some places have islands of the stuff half an acre in size making working a topwater bait nearly impossible, even when rigged with single hooks. The north wind didn't help any, and it wasn't strong enough to push the grass into rows where we could throw a topwater between it.

On Saturday morning we had an east wind which is a great wind for Port Mansfield and is perfect for where we had been fishing, but I wanted to try a different spot. Following my gut instincts we went to one of my favorite areas south of Port for our first stop of the day. I should have listened to my son and gone back to where we had been catching trout but–Oh No! I had a hunch. Unfortunately it did not produce as hoped. We caught only one keeper trout there and spent way too much time. When my son caught a hardhead on his soft plastic and Keith hooked a stingray It was time to go.

I headed to another spot that usually produces some decent fish but we struck out there as well. With my crew grumbling about my guiding skills and close to mutiny, we headed back to where the bite had been so good the day before.

Boats! Goodness, there were lots and lots of boats.

There were boats everywhere in the immediate area where we had been catching trout so we left the masses behind and moved further away but stuck with the same depth and got into the fish with the first cast. The east wind was pretty stiff so the grass rowed up nicely and you could have fished a topwater, but we were doing so well on soft plastic that we only half-heartedly attempted the surface lures.

It was really incredible. Almost every other cast yielded a trout. It might not be a keeper but you would boat a trout. For every three or four 15 inchers you caught you'd stick a solid 17- to 20 inch fish. Of course boats moved in when they saw us on the fish and some cut off my drift, shutting down as close as 30 yards in front of me. We moved a few times.

I ran about four miles from the last spot and with no boats around, keeping with similar structure in that 5 foot depth range, we were right back into the fish again. Always remember that if you can get away from the boat traffic your chances of doing well on the water increases significantly.

We stopped fishing and headed back to Port when we had a nice mess of trout in the box and a few reds tossed in for good measure.

When the fish were filleted, bagged and on ice, it was time to hit the Pelican for some food and a cold drink, or three. OK, maybe it was four.

That afternoon we opted to enjoy the house and didn't launch the boat. It was a great time with good friends and a badly needed saltwater fishing fix for all.