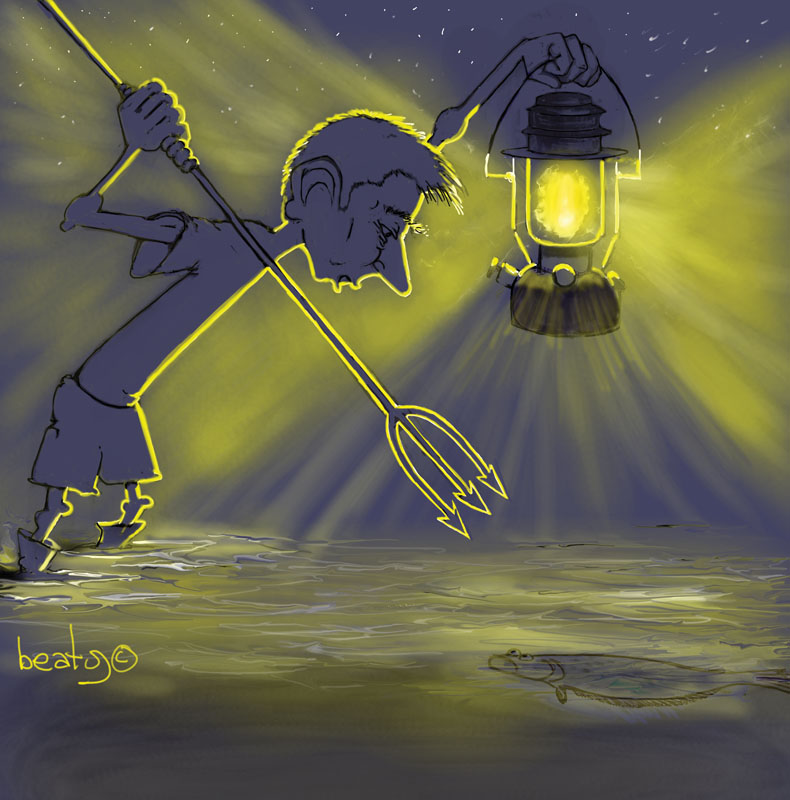 Bodie fussed at Tommy and told him to hurry up and get in the boat. Tommy had long healed up from his injuries when his home had been broken into and was eager to get on the water, but not at night.

"I don't know why we have to go flounder sticking in the first place, Bodie" Tommy whined. "How come we don't just get up in the morning and go fishing like normal people and maybe catch a flounder?" he asked with a frown.

"Because I like to flounder and because the doctor said you needed to do more walking, and because Red likes to flounder, too," Bodie told his friend.

"Well you remember what happened to us the last time we went floundering and I got a bloody nose from those rustlers who were stealing Mr. Connor's cattle," Tommy squealed.

"You got a bloody nose when you ran into my back and snagged your nose on the teeth of a flounder I had hanging on a stringer over my shoulder," Bodie shot back.

"That's not how I remember it," Tommy mumbled.

"And that's not the story you've been telling people, either," Bodie replied with a chuckle.

With Tommy finally in the boat, Bodie lowered the big Tran Cat SVT into the water and headed up the ICW. "We've got to pick Red up at Parrot's bait camp" Bodie said.

"Tell him not to pick on me, that I'm not completely healed up yet," Tommy said.

Red was pacing the dock when Bodie idled up. "It's going to be dark by the time we get to Green's and I wanted to try for some trout before dark," he growled. "What in the world took you so long anyway?"

Bodie cast his eyes in Tommy's direction, who was already beet red, and went about stowing Red's gear. Red glared at him but didn't say anything as the trio took off down the ICW.

"The wind just quit around 1:00 today," Red yelled to Bodie over the noise of the boat. Bodie nodded and gave the big engine more throttle. "Just how fast will this barge go?" Red asked.

"Faster than I want to or need to," Bodie grinned to his friend.

They skimmed across the slick bay as the sun sank behind them. Bodie turned his running lights on and when darkness fell he flipped a switch on the console. An extremely bright swath of light appeared in front of the boat and lit up the bay almost 180 degrees and nearly 100 yards ahead. Tommy turned around, looked at Bodie and asked "What in the world is that?"

Bodie smiled and said, "I got the idea from a friend who did the same thing with his SVT. I added that front casting platform and had Chuck at the boat shop wire in a bar of LED lights," Bodie told them. "Cost me a pretty penny but I can sure run at night with those lights turned on," he added.

The three rode along with the bright lights showing the way and then Bodie started easing back on the throttle and slowed to a stop. With the bow of the boat pointed towards shore the lights caused rafts of mullet to explode from the water.

"And I want it to stay around," Bodie said as he shut the LED lights off.

With only the running lights it was instantly much darker and Tommy started to shudder. "Sure is dark out here," he moaned.

Bodie flipped another switch and the entire deck became illuminated in soft red LED glow. "Is that better Tommy Boy?" he asked.

Tommy just glared at Bodie and Ol' Red from his perch on the console seat.

"What in the world is that PVC thingamabob you have there, Red?" Tommy asked.

"It's a battery operated LED floundering light you ignorant freak of nature," Red growled. "That'll never work, Red. You need a good old fashioned Coleman lantern for floundering, like me and Bodie use!" Tommy blared triumphantly. But when Tommy turned to get some backup from Bodie he noticed that he too had one of the odd looking PVC poles with a round thing on one end and wires coming out the other.

"Sorry, my boy, but this thing is light, it's bright, it doesn't need white gas and it's not hot on my hands," Bodie replied instantly. "You need to get with the times if you plan on keeping up with me and Red."

Tommy just snorted and sneered at both of his friends and took his ancient Coleman single mantle lantern out of its case. He had put a new mantle on before they left port and struck a match to set it on fire to burn down. "New-fangled fancy-smancy lanterns don't hold a candle to a real lantern," he mumbled to himself.

"Tommy, don't even think about filling that lantern in the boat, you know better. Walk it up to the beach and fill it where it is safe," Bodie warned.

"It's dark up there on the shoreline, Bodie" Tommy whined.

"I swear you are afraid of your own shadow. I'll go with you and give you some light if it makes you feel better," Bodie assured him.

Red said he was going to flounder down just a ways and Bodie said they would work the other direction and whistle should they get into a bunch. Red said that he would do the same and off he went.

Tommy grabbed a can of lantern fuel, his gig and lantern, and he and Bodie made their way to the shoreline. With the light of Bodie's electric lantern Tommy carefully poured the flammable liquid into a funnel that he held in the small opening of the fuel tank. When it was full, Tommy removed the funnel and reached for the screw cap that would seal it. But the screw cap wasn't where Tommy thought he had set it.

"Bodie can you shine your light here, I can't find the cap to my fuel tank," Tommy said with worry.

Bodie shined the light all around the lantern but the stainless cap wasn't anywhere to be found and Tommy started to get upset.

"I sat it down right here," Tommy exclaimed. "It has to be here, Bodie, I can't use my lantern without it."

"Check your pockets, Tommy. It didn't grow legs and run off into the salt grass," Bodie said.

Tommy fumbled through his pockets and when he finally patted his shirt pocket he began to smile, "Found it," he announced.

Bodie laughed, said good job, and Tommy began pumping the lantern to pressurize the fuel. When that was done he struck a kitchen match and turned the knob so the fuel could run into the mantle.

"You ever notice, Tommy, how those old lanterns cast a ghostly glow across those dunes?" Bodie asked.

"I know. And I remember when you scared me to death over here, Bodie, with the ghosts and shooting and stuff, and I'm not falling for that again," Tommy said nervously.

The pair started walking the opposite direction Red had taken and had only gone a few yards when Tommy spotted a nice flounder lying up shallow. "Here's one for the stringer, Bodie" Tommy said as he stuck his gig into the head of the flounder.

With care he reached his hand under the fish and turning his gig up he lifted it out of the water. He ran the sharp end of his stringer through the jaws of the flounder, shook it down to the float, and rejoined Bodie who was stringing one of his own.

There's another one lying right over there, Tommy," Bodie said.

Tommy tilted his lantern to shine where Bodie pointed and saw the flounder laying on top of the sand, gigging it the same way he had done his first. Turning to string it, he noticed Red's light heading back towards them. "I guess Ol' Red didn't find any flounder down that way, Bodie. He's already on his way back."

Bodie and Tommy waited for Red to catch up and Red told them the water was muddy down that way, probably because the sloughs had drained so much before the tide started back in. "Can't see a thing down that way," Red affirmed.